About 10 million Britons are preparing to head off on holiday during the Easter weekend, with forecasters predicting some of the hottest temperatures of the year.

Motorists have been told to avoid travelling on Good Friday as they were warned to expect long tailbacks on some of the country’s routes right through to Monday.

As many as 400 engineering projects are being carried out on Britain’s rail network over the weekend, leading to station closures and replacement bus services.

The widespread train disruption will force millions of extra people onto the UK’s roads on what is already one of the busiest times of the year.

For those staying in the UK, the Met Office is predicting plenty of dry and sunny weather across the country. 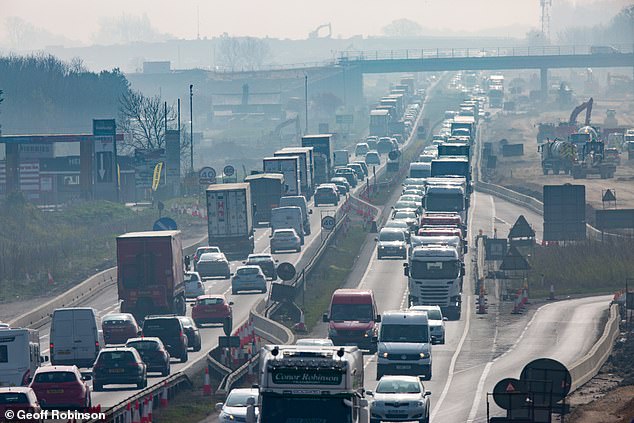 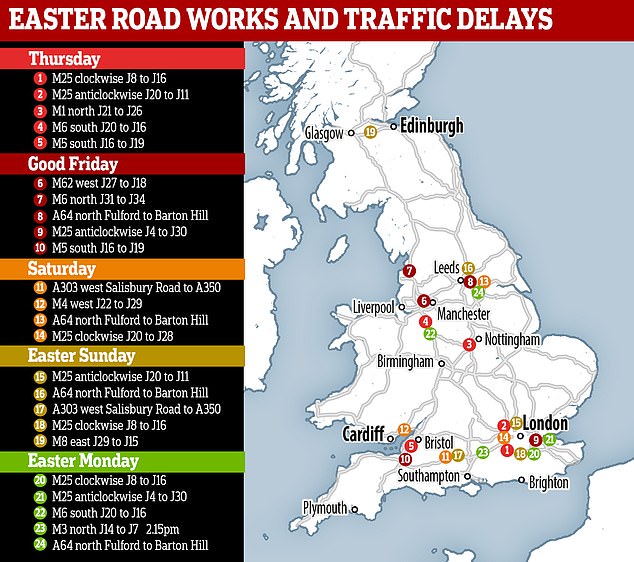 Temperatures are expected to widely reach the low 20s Celsius and peak at 23C in the South.

Met Office chief meteorologist Steve Willington said: ‘With temperatures usually around 10-13C at this time of year, it’s certainly going to be significantly warmer than average this Easter weekend and quite a contrast to the colder weather we have seen so far this month.’

A survey of 1,258 people by tourist board VisitEngland indicates that 7.4 million have planned an overnight trip in the UK this weekend.

This is up from 4.8 million last year and is the most since the annual survey was launched in 2013.

VisitEngland director Patricia Yates said: ‘It is great to see so many Brits are planning holidays at home in the UK in what is set to be a cracking Easter, bringing a boost for businesses and local economies as the summer season gets under way.

‘Holidaying at home continues to be a great choice with the certainty of budgeting, the ease and convenience, and the quality on offer all tempting people to explore beyond their doorstep.’

Airports, ferry terminals and the Channel Tunnel will be extremely busy. 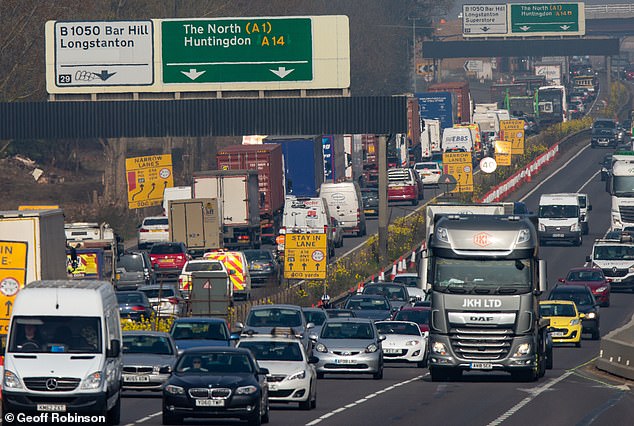 Abta chief executive Mark Tanzer said: ‘Easter is always one of the most popular times of year for travel and over the long weekend millions of holidaymakers will be taking either an overseas or a domestic break.

‘The fact that Easter falls so late this year means that there is a good range of short-haul destinations, offering good temperatures and guaranteed sunshine.

‘As always on a busy bank holiday, leave plenty of time to get to your departure port and check for engineering work and line closures if using public transport.’

Traffic queues are caused by too many cars on the road at the same time. By travelling outside of peak times you can avoid the jams.

Before travelling make sure you check tyre pressure, oil and coolant levels to avoid a breakdown.

3. Keep you and your passengers happy

Meanwhile, a survey by VisitEngland suggests 7.5million Brits are undecided about  whether or not to take an overnight trip in the UK this Easter, suggesting roads could be even more congested than feared.

RAC expects 15million car journeys to be taken in the run-up to Good Friday, with a further 1million across the bank holiday weekend itself.

Traffic data from mobility analytics provider INRIX indicates that jams will peak on Good Friday, with major routes clogging up between 11am and 4.30pm.

The worst delays are expected on the M5 southbound, passing west of Bristol – part of the popular holiday route towards Devon and Cornwall.

Other badly-hit routes include the M25 anticlockwise from Bromley through the Dartford Tunnel to the A13 and the M6 north between Preston and Lancaster.

The M62 west between Leeds and Manchester is also expected to be busy, with delays of around an hour are expected.

In a bid to ease the congestion, Highways England is removing more than 450 miles of roadworks.

Rail stations such as London Euston, one of Britain’s busiest, will be closed throughout the four days for preparation work on the HS2 high-speed line.

The Gatwick Express will be closed on Friday and Saturday, while there is a bus service running between Glasgow and Lancaster from Saturday to Monday. 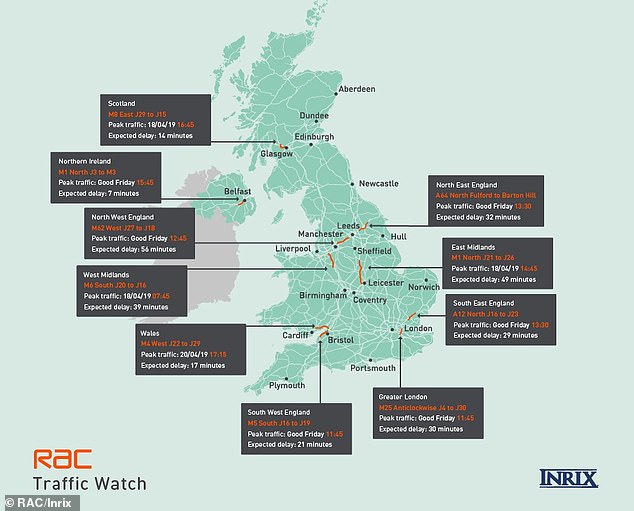 There will also be no trains at London Fenchurch Street, an amended service between Preston and Glasgow Central, and some lines through Wimbledon will be closed.

Dan Croft, spokesman for INRIX, said: ‘Drivers in the UK are all too familiar with traffic jams. In fact, the average UK driver lost more than 170 hours to congestion last year.

‘We are predicting Good Friday will be the worst for traffic from late morning into the afternoon.

‘For drivers looking to avoid the worst congestion, the best options are to travel on Saturday, set off early in the morning and keep updated with real-time traffic data.’

Martin Frobisher, route managing director for Network Rail, said: ‘We recognise there is never an ideal time to shut the railway for our must-do work.

‘Bank holidays are the least disruptive time to do it, when fewer passengers use the railway compared to the working week.

‘That way we can do the maximum amount of work while impacting the fewest number of people.’

Britain is set for the warmest day of the year so far on Good Friday and temperatures could build further to reach 77F (25C) by Saturday.

The country looks set to be hotter than Rome as an area of high pressure brings warm air north from the Mediterranean – giving Britain an Easter heatwave and its first real taste of summer this year.

But it’s bad news for hayfever and asthma sufferers as a pollen bomb clashes with soaring pollution levels, putting millions of people at risk of potentially lethal ‘grey fever’ this week.

Rising temperatures will spur trees to spew out clouds of irritant pollen as a cloud of traffic smog and factory fumes blows in from the Continent, with a combination of airborne toxins and allergens hanging in the air.

The warmest day of the year so far was nearly two months ago February 26, when 70.1F (21.2C) was recorded in Kew Gardens, South West London, during February’s record-breaking spell of sunny weather. 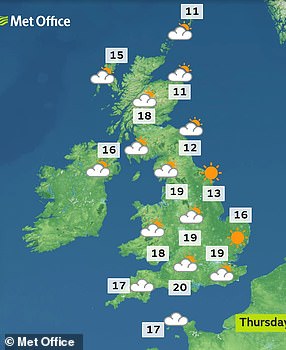 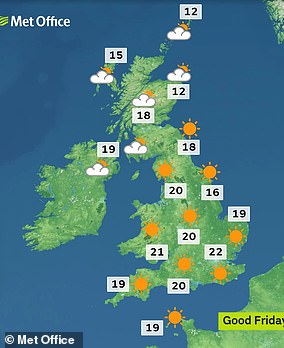 Temperatures will be rising as the week goes on towards the Easter weekend, with 72F (22C) possible on Good Friday

Fans of the 1940s dress up as pilots, spivs, squaddies and NAZIS in World War Two re-enactment
60 Minutes boss is a no-show at work after fresh wave of allegations against him and Les Moonves
Southend rocked by explosion as Royal Marine bomb squad shut world-famous pier
Wimbledon 2019: Fans ordered not to take pictures of Meghan Markle
Steve Bruce feeling the heat at Aston Villa as chief plans shake-up
Did Holly Willoughby consult a psychic banana? Find out in our irreverent quiz of the year
Australia strawberry tampering suspect `motivated by...
Lack of sleep is worse for girls' mental health than spending hours on social media, study reveals