The dark, cold evenings are bad enough, but it’s even harder to feel positive this December. Here, in a lyrical extract from his new book, The Light In The Dark, A Winter Journal, author HORATIO CLARE, who was raised by his mother on a Welsh hill farm, recalls the awe of his childhood Christmases — memories that can illuminate even the blackest times . . .

The trees have stars in their branches and all the fields sparkle. The night seems to listen to the owls’ carols as the dogs growl in their sleep. The spirits are abroad! It is Christmas.

Christmas! Was there ever such a magical word to a child? A word with a world in it, a word containing a silver moon and the crackle of burning twigs, flying things and kids led by stars, berries and gold and pheasant feathers. A word with the darkness of fir forests in it.

‘Christmas is coming . . . ’ our mother said. Everything was coming. Our father, whom we rarely saw, would come, and Father Christmas, whom we still had not seen, and food, feasts with puddings, which we never had, and presents. We would even, in our aunt’s house, see some television. Indiana Jones, Darth Vader and adverts! We loved adverts.

The advent calendar provided the drum roll and then it was upon us, and at last the grown-ups dropped their miserable obsessions with school and work and bills and turned to matters of true importance! 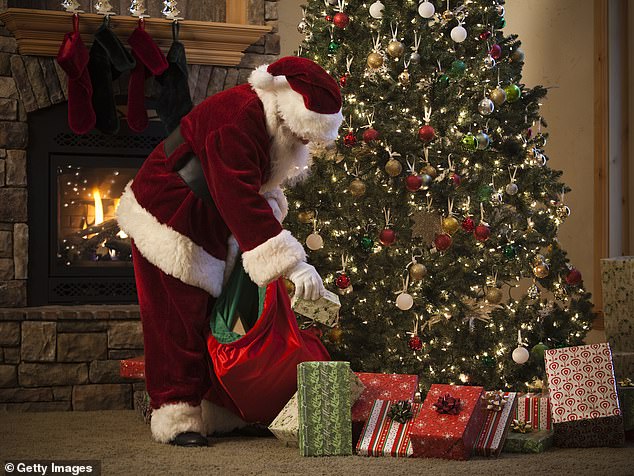 ‘We’re going to get the tree today!’ our mother said, and we cheered.

We lived in the coldest house in the world, but at least we had the biggest tree. It came from old Mr Berenbrock, who had been a German prisoner of war interned in Wales and had stayed. Somehow it seemed right that we should get the tree from him, as though peace had just come again and we were still playing football in no man’s land.

The tree had tremendous power — spiky and delicate, sticky with sap and that smell, like a strange relative who came to preside over the best day of the year. With the lanes too icy to drive, we carried it up the hill and dragged it over the meadows. It was the first really green thing the sheep had seen for months and they piled in, ravenous.

We dressed it like a god in lights and glass and tinsel. When it was done, we turned off the other bulbs and contemplated it, bewitched by its colours and shadows, the infinite and tiny worlds in the baubles and the space between its branches.

‘Now for the holly,’ she said. ‘It should be good — as long as the fieldfares haven’t eaten all the berries.’ The coming of the northern thrushes was another sign, like the fire’s embers in the morning, that the great feast was near.

Out we went again, to the copse where the fox lived and the pigeons roosted, to do battle with the spiny trees.

‘Why do we have holly?’ I asked, as the prickles jabbed and scratched us.

‘It’s to do with the crown of thorns, like the Yule log has become the Christmas tree. Christmas comes from an ancient pagan celebration, a festival of light in the darkness, renewal and birth in the death of the year.’

We were natural pagans, my brother and I. We dreamed of feasting and fighting like Vikings and hoarding treasure (unwrapping presents was the climax of Christmas for us, the bit we knew we should not look forward to most of all but did, and with the stockings it came twice), and we loved the season’s stories. 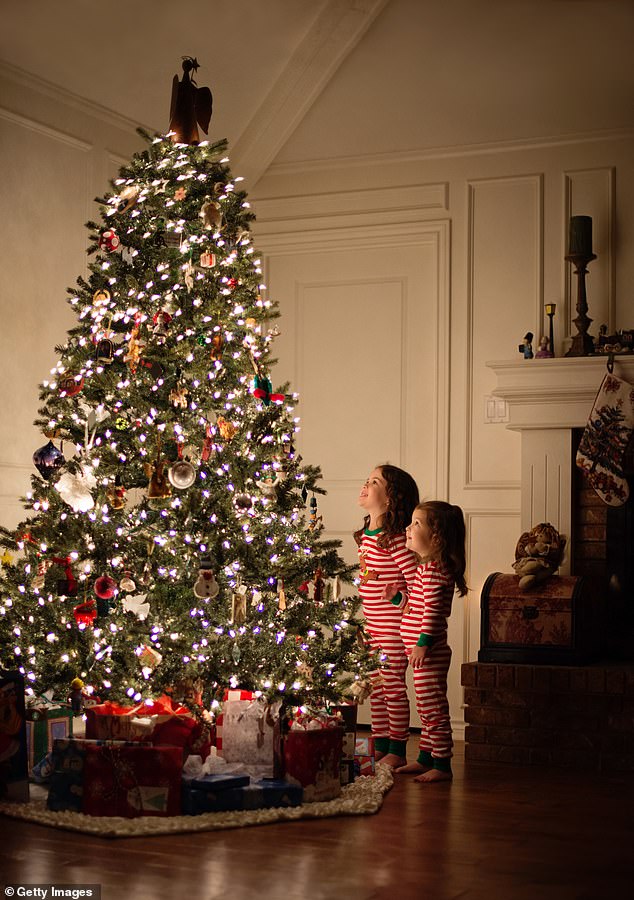 Christmas was a blizzard of stories, a world transformed by their power, and we made no distinction between the ancient and recent. At Christmas, after we had gone to bed, our mother said, all the animals could talk.

The sheep would moan about the cold and the food, of course, because all sheep were always hungry, but I wondered what the old cat hissed at our dog.

What a rattle of conversation there must be down there, as the mice compared notes on their ordeals in my trap, a cereal bowl propped on a pencil (I always let them go), and the cat asked the dogs for a quieter year, please, less midnight barking (it was eerie and terrifying when they did it for long, baying like wolves to the moon), and the dogs told wild stories about all the foxes they had nearly caught and the badger-baiters they had seen off.

I thought of shepherds, even older than our neighbours, on another mountain, wondering what marauder troubled their flocks as the miracle approached.

With no television to confuse us with pictures of what was actually happening in Manger Square, all time seemed to roll at once.

We were natural pagans, my brother and I

The streets of London would be silent, I imagined, except perhaps for one or two men whom my mother had watched, once, laughing and shouting because they had never seen snow.

The shipping forecast was the last thing I heard. Out at sea somewhere, Tintin and Captain Haddock sat in the wheelhouse of a rusty freighter wearing paper crowns and sharing a bottle of grog.

The voices from the radio, our only regular visitors, would bring us familiar but honoured guests. Tomorrow, the Pope, speaking in 70 tongues, would wish us peace on earth. Tomorrow, the Queen would say, ‘and a very happy Christmas to you all’ in exactly the tone she was using now with Father Christmas, no doubt, as he laboured up and down her hundred chimneys, filling all her stockings with parcels.

There were two Father Christmases: our own, who was there when we were very young and who came on Boxing Day after the divorce, and the crabby old man created by Raymond Briggs, who slithered down the chimney, cursing blooming this, blooming that, no less real for his present-buying partnership with our mother. 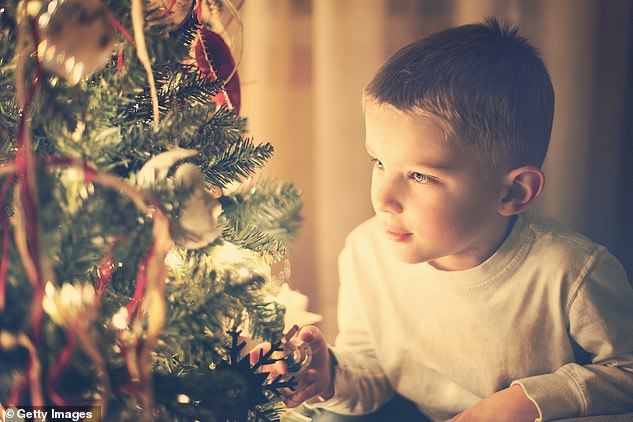 One year, when our father was still there, I woke in the dark before 6am and led my brother down to see if he had been. Yes! The lumpy, serpentine weight of stockings was proof that all the stories were true. Anything is made magical when wrapped in an old sock and a myth.

The lights went on and our parents peered groggily from the bed as we extracted our treasures. My brother, in a flurry of enthusiasm, tore into a pack of playing cards, ripping the box in two.

‘Oh shucks,’ our father groaned. ‘At least they can get some sleep.’

He cooked a goose that year with the head still on. The eyes turned into raisins and the beak looked like yellow crackling. My mother hasn’t eaten one since.

In the following years, when he came on Boxing Day, our Christmas doubled while our mother’s was halved.

I don’t think I have ever witnessed a man do something so difficult, so brave and so terrible

He took us away in the evening for a miraculous annual week of shows and television and radiators and lights and the countless Christmas trees of London, leaving her among the decorations and torn wrapping paper. She never let us see how it must have felt.

In the middle of everything, though, between the stockings and the presents, was the ‘point of it all’, as my mother put it, which meant frenzied hair-brushing and a hunt for decent clothes to go with our new jumpers.

Church became more engaging as we grew up. The village beauty would be there again, we reminded each other, and there was always a good sermon.

Our rector had something of a druid about him: sacred white hair, deep, bright eyes and the high Welsh voice of a poet. 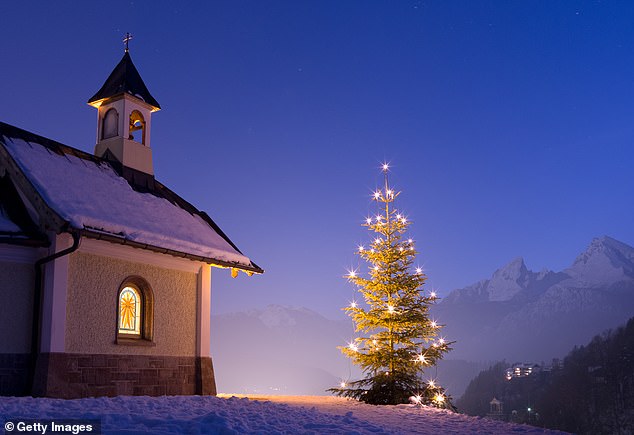 As a pantheist and pagan child who had not made up his mind about God, church meant carols and readings, cribs, the journey of the Magi if you were lucky, and Christingles, which were oranges with candles in them.

I never expected, at the height of the Christian year, to be gripped or moved by faith, but one midnight Mass it happened.

As we sang and kneeled and prayed, in the third pew, the rector’s wife sat or stood, out of time, helped and comforted by her children. Her face was bewildered, strained and confused. She was fast in the grip of Alzheimer’s. They had been battling it, but the fight was nearly lost.

The rector loved her with all his heart, and his heart, we could see, was breaking. But he carried on, carrying her, carrying all of us with him, his thin voice wavering as he preached that year’s sermon. The subject, he said, was Joy.

He spoke of joy to the world and the need to be joyful, the responsibility on this of all days to feel the joy the Christ child had brought, and the need to spread that joy around us.

I don’t think I have ever witnessed a man do something so difficult, so brave and so terrible.

The rector and his faith were in the furnace before us. And though joy was not, and hope was not, whether you believe it or not, God was there with him. Even a child could see it.