Aaron Hernandez was emotionally unprepared to go to the University of Florida early aged just 17. And it didn’t help that the American football player quickly learned his talent on the field could help get him off the hook even when he was in the wrong, the Boston Globe reports.

The publication recalls an incident in April 2007 where an underage Hernandez got in a spot of trouble at a bar in Florida but didn’t face the wrath of law enforcement thanks to his connections in the Gainesville area.

Hernandez barely had to answer to police when The Swamp bar manager complained he had been ‘sucker punched in the left ear’ by the freshman tight end.

Instead of being reprimanded when cops were called to the scene at 1.07am that night to sort out a dispute over a $12 bar tab, he wasn’t arrested even after admitting the offense to officers and he simply told them he thought fans had bought the two drinks they argued over. 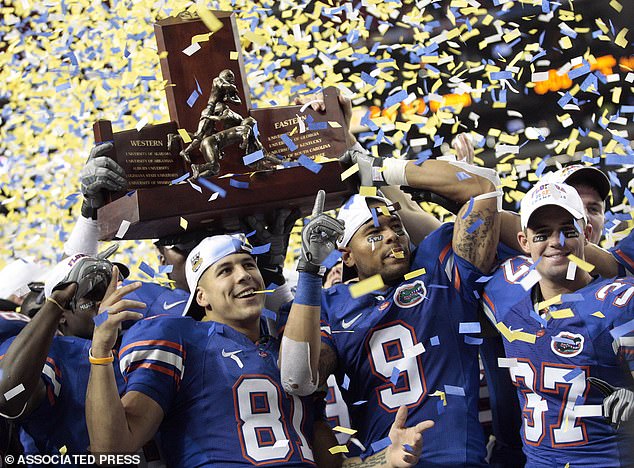 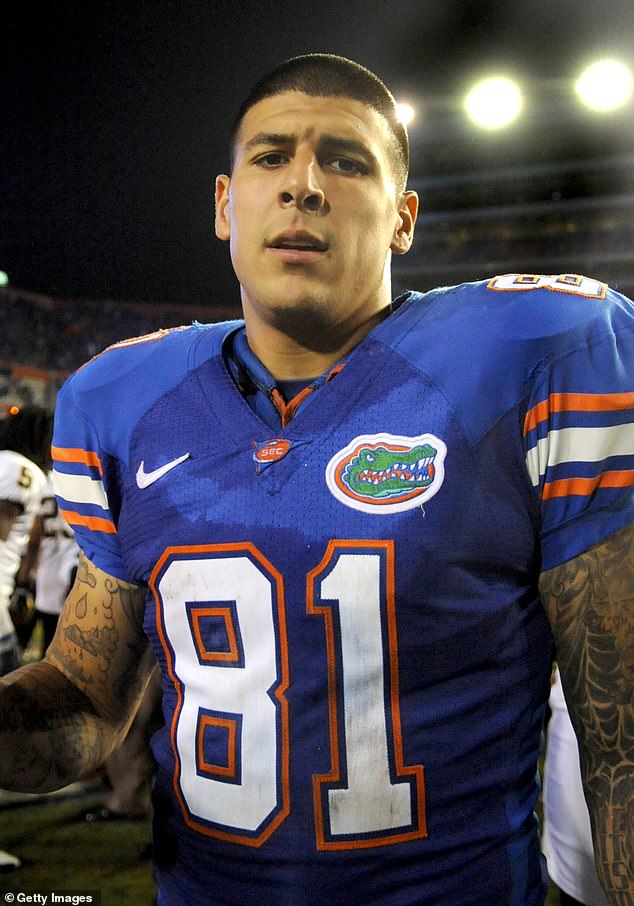 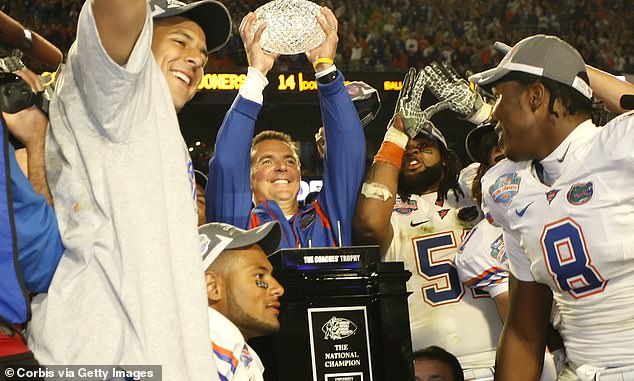 Hernandez didn’t face prosecution for the blow that left the employee with a ruptured eardrum either. Ordinarily anyone would have potentially had a felony on their hands but after he and fellow footballer Tim Tebow called coach Urban Meyer, the incident was soon smoothed out, according to police records.

The Globe reports the bar manager said he might ‘request that the charges be dropped’ after being ‘contacted by legal staff and coaches with UF and that they are working on an agreement’. 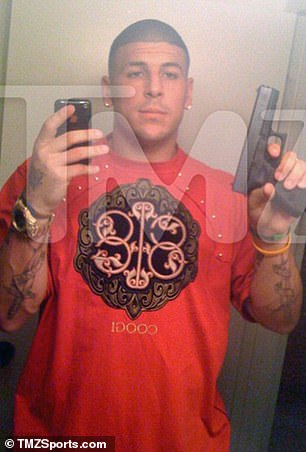 After Huntley Johnson, a graduate of the university’s law school got involved, it was seemingly the moment Hernandez realized that being a sports star had benefits that even included being above the law.

His high school principal revealed in an interview that both coach Urban Meyer and his assistant Steve Addazio wooed Hernandez in 2006 – the same year his father had died suddenly – by telling him he had the potential to play for the NFL.

By encouraging the school to let him do classes throughout the summer so he could graduate six months before the rest of his classes, the teenager was able to push ahead.

However his principal said Hernandez, who was said to have been struggling with anger issues, drug dependency, his sexual identity and being abused while growing up, wasn’t comfortable with the idea.

‘They were pushing pretty hard,’ Dennis Siegmann said. ‘To hear that not just from Urban, but from a local guy, Steve Addazio… . It was pretty daunting on Aaron.’

He added: ‘If I had it to do over again, I would have fought tooth and nail not to let that kid graduate at midyear, not to let him go to Florida at midyear.

‘Had we had a longer time with him, maybe we could have changed things.’ 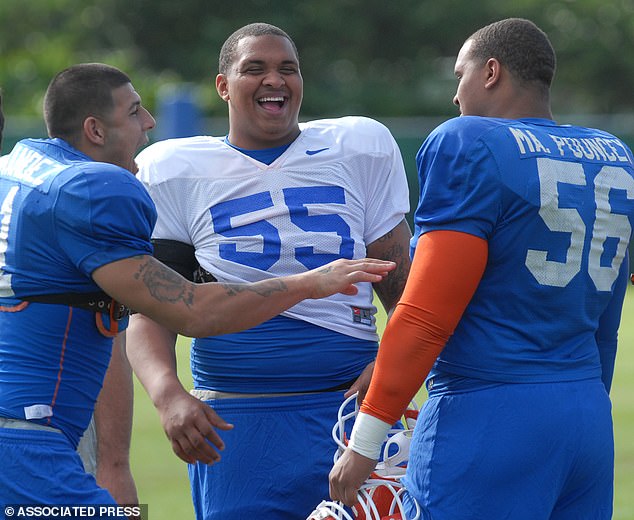 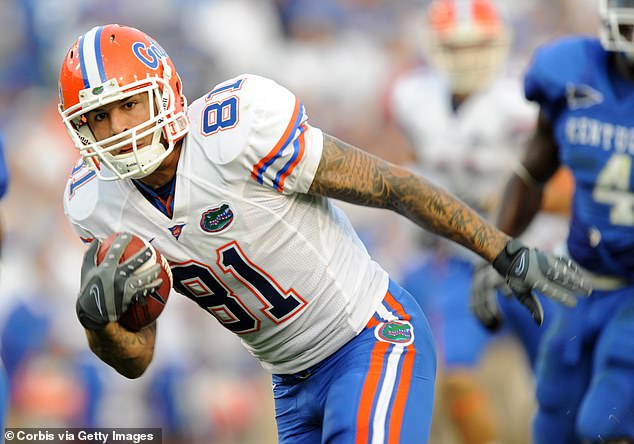 Hernandez played for the Florida Gators in September 2009

In September that year he was implicated in a shooting after attending a nightclub and getting angry about a man snatching a goal chain off his Gators teammate Mike Pouncey’s neck.

He was still only 17 years old.

Gainesville police Detective Patty Nixon called Meyer’s personal assistant and told them they needed to show up with Hernandez and the Pouncey twins after Hernandez was picked in a photo line-up of suspects.

It took them four hours to arrive after consulting their unofficial lawyer who had helped out in the previous incident. Johnson said he did not recall being involved.

‘It’s hard for me to wrap my head around the fact that there is something so serious and it took them so long to produce these young men,’ Nixon told the Globe.

She added Hernandez – whose verbal SAT score was below average at 420 while many students got at least 600 – didn’t seem concerned by situation he was in and took a nap while waiting to be interviewed. 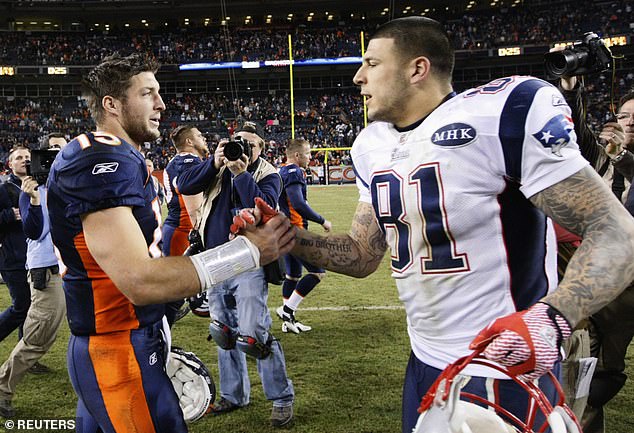 He then declined to speak without a lawyer.

‘When you’re in a police station in the middle of an attempted homicide investigation, you don’t expect to walk in on somebody sleeping,’ Nixon added. ‘I would expect a little stress out of him at that point, but didn’t get that at all.’

Ultimately he was let off the hook when other witnesses described someone not matching Hernandez’s appearance. The previous witness retracted his statement adding that he only mentioned the footballer because he had noticed his rage during the incident.

Later on during his career a picture of him posing for a selfie and holding a Glock gun around that time went viral.

It wasn’t just violent crime that Hernandez was associated with, he can be heard admitting in phone call from jail that during his younger years that ‘every time I was on the field I was high on weed’. 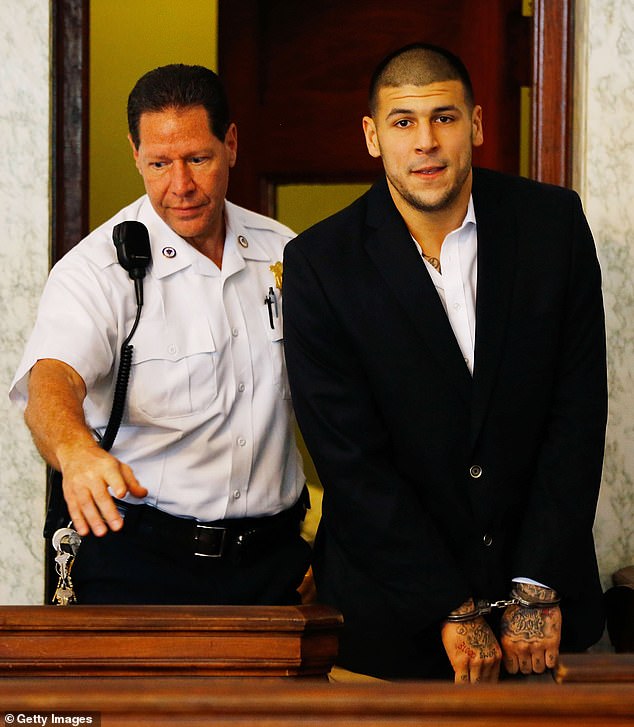 Hernandez is escorted into the courtroom of the Attleboro District Court for his hearing on August 22, 2013 in North Attleboro, Massachusetts. The former New England Patriot Aaron Hernandez was indicted on a first-degree murder charge for the death of Odin Lloyd

He was benched for not being ready to play during his sophomore year, which Gainesville Sun columnist Pat Dooley said ‘was the code for failed a drug test’.

Still, coach Meyer told Hernandez ‘You’re going to have to turn pro’ after his junior year according to attorney Jose Baez, noting his frustration with the player.

According to a psychological profile by NFL scouts obtained by The Wall Street Journal, when he left for drafts aged 20, he got the lowest possible score for ‘social maturity’.

It wasn’t the first time he was prematurely sent on his way.

Not many people in his life were aware he had been molested as a child and was beaten by his father among other issues in his upbringing.

The New England Patriots player took his own life in April 2017, aged 27, two days after he was outed on The Kirk & Callahan Show.

It was five days after he was acquitted of the murder of Odin Lloyd and two years after he had been sentenced to life in prison.

His family donated his brain to Boston University, which found he suffered from the most severe case of Chronic Traumatic Encephalopathy (CTE) – repeated trauma to the brain – ever found in someone his age.