Not another Picasso show? Year after year they come — Picasso in old age, Picasso starting out in Paris, Picasso in 1932, Picasso’s ceramics.

And if you missed those shows, fret not, you can catch up at the dedicated Picasso museums just a little further afield — in the South of France, at Antibes and Ceret, and above all in Paris.

Pablo here, Pablo there, Pablo everywhere… is there really more to see or to say?

Well, the first thing to make clear is that the Royal Academy’s new exhibition is a gargantuan, generous show. 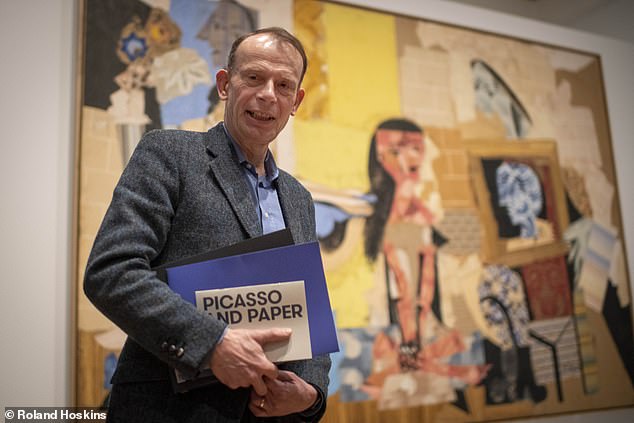 Andrew Marr is pictured at the new Picasso exhibition, at the Royal Academy, Piccadilly in front of ‘Femme a leur toilette’. If you are interested in modern art in any way, you simply have to see this show

Picasso And Paper might lead you to expect something slightly tiddly and narrow: a few prints, a few Perspex cabinets containing marginalia, notebooks and preparatory drawings for the real stuff.

Far from it. Drawing was central to Picasso’s art and life; and with only a few oil paintings and sculptures included, it is nevertheless a giant, sprawling review of his entire life’s work.

You could spend a week — no, a month — here and still not be bored. There is so much to see, there is a danger of coming out with bruised eyeballs.

If you have ever felt that you have never quite ‘got’ Pablo Picasso, or that you don’t have a good overview of his achievements, then this is the show to come to.

The very first room reminds us that, when it comes to making images, this man could do anything. From the beginning, he was a magician. 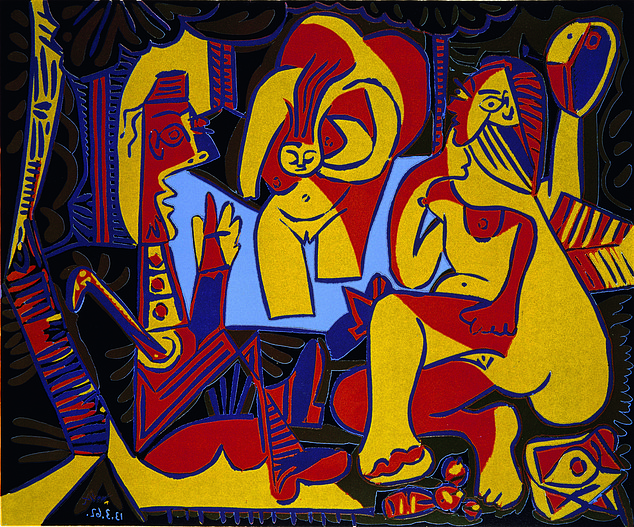 Picasso’s Le Dejeuner Sur L’Herbe, after Manet, from 1962 is seen above. It’s often said that Picasso changed his style when he changed his lovers but, wandering around this show, that seems a bit shallow

There are tiny little paper cut-outs of a dove and a dog, made when he was all of nine years old. They are clever, witty and startlingly assured.

And then, only a few years after that, at 11 or 12, he is drawing academic studies in art college – nudes, antique sculptures — of which most painters would be proud in their prime.

Already he had an instinct for light and dark and a flowing line, that even good artists struggle for a lifetime to achieve.

By the time he arrived in Paris, still a very young man, Picasso was making portraits in charcoal and pastel that seethe and hiss with energy.

There is a page of sketches, as he practises drawing hands, in which he shows himself stripped to the waist, sketchbook in hand, cocky as they come, already a young conqueror.

The problem was, of course, that if Picasso could draw anything at all with such liquid ease and self-assurance, how would he manage to avoid boredom? Could he manage not to be glib?

He had a relentlessly curious, self-critical mind. You can see it in his torrent of tiny drawings, constantly questioning himself. In many ways the notebooks, where you see him thinking aloud, are among the most fascinating things here. 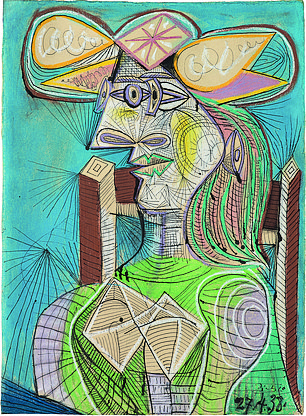 Seated Woman (Dora) from the late 1930s is pictured above. If you have ever felt that you have never quite ‘got’ Pablo Picasso, or that you don’t have a good overview of his achievements, then this is the show to come to. The very first room reminds us that, when it comes to making images, this man could do anything

There is at least one substantial preparatory drawing over which he has scribbled furiously — a bad failure, to his mind.

All his life, this restlessness made him a compulsive remaker of his art. The blue period, the rose period, the Demoiselles d’Avignon, and the African masks, Cubism, neoclassicism…every year or two a radical fresh start, charging off in a fresh direction.

It’s often said that Picasso changed his style when he changed his lovers but, wandering around this show, that seems a bit shallow.

It was more that, as soon as he achieved anything, he felt the need to challenge and critique it. He could not stand repeat- ing himself.

There is more than enough mainstream work on paper to fill an ordinary exhibition.

As ever with the good artist, even if you think you know the work from reproductions it’s worth coming to see for yourself.

There is a coloured etching and engraving in the room of his Minotaur pictures, the Minotauromachy, in which innocence — armed only with a candle and flowers — confronts raging, slaughter-crazed male sexuality.

This picture, not so very big, is so complicated, subtle and detailed you could look at it for hours.

Minotaurs! The big problem with Picasso, of course, is his attitude to women. There is anger and sadism not just in the life, but in the work as well, a joint-splitting of the female form which goes well beyond the playful.

But the Minotaur pictures remind us that Picasso was also profoundly self-critical. He knew he could be foul.

Well aware of the horror the inflamed man can wreak, his portrayal of the bovine, horned, thickly tousled bulls’ heads, snorting and rolling their eyes, are also a self-hating self-portrait. 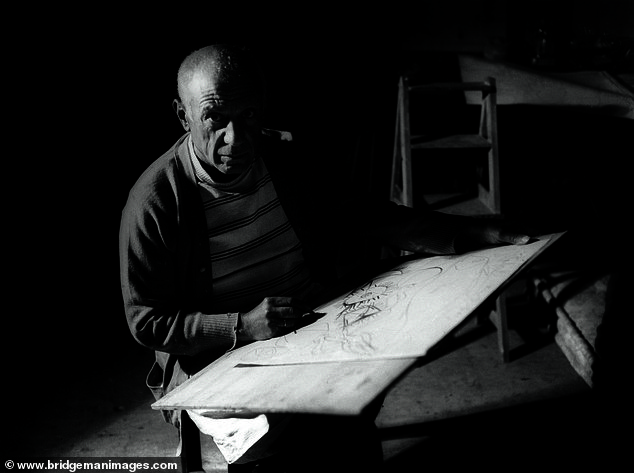 Drawing was central to Picasso’s art and life; and with only a few oil paintings and sculptures included, it is nevertheless a giant, sprawling review of his entire life’s work. You could spend a week — no, a month — here and still not be bored. The artist is pictured in 1946

But what makes this show so worth the ticket is how far beyond familiar Picasso it goes.

He was a compulsive doodler and decorator. Here are gathered scraps of all kinds of paper from his childhood to his dotage. There are tiny torn table napkins, which become the heads of animals, some with cigarette burns for eyes.

There is the front page of a Paris newspaper, reporting military manoeuvres before the Second World War, desperately drawn and doodled all over.

There are the envelopes of letters sent by friends which, again, Picasso’s fingers just could not leave alone.

So we have him in all moods, from the highly serious to the rude and playful. A set of etchings, made during the Spanish Civil War, mock Franco with a savagery that no newspaper cartoonist — not Searle, not Scarfe — has matched.

The scale of the work here ranges from giant to minuscule. The biggest thing on display is a collage Picasso made in the winter of 1937, of women at their toilet.

At its centre squats the photographer and artist Dora Maar (who has just had a good show of her own work at Tate Modern). She is redly gasping, her dark eyes staring as two of Picasso’s other mistresses comb her hair and present a mirror, which seems to show not her reflection but the painter’s.

The whole thing is composed of pieces of cut-out wallpaper; it is a kind of domestic ‘Guernica’, his anti-war masterpiece that memorialised the bombing of the ancient Basque city during the Spanish Civil War.

At the other end of the scale are torn and scratched tiny paper pieces, making knives and forks, dancers, masks and skulls, so small that even pressed between glass they seem to be barely there at all.

Then there are his Cubist guitars, made out of small pieces of cloth, string, painted cardboard and newspaper; beautiful tricks from scraps. At times, he can seem almost like a children’s entertainer, constantly turning one thing into something else.

Towards the end of the show there is a remarkable film of Picasso drawing. He was working with new-fangled American felt pens, which so saturated the paper the coloured marks could be filmed in real time from the other side.

The effect is that you see the drawing happening as his hand moves. It’s almost like watching his mind working. I found it entirely mesmerising.

Because, I suppose, all shows now must try to attract the widest possible audience, including children, there are little jokey notices aimed at the young. But the truth is, children ought to be kept well away from this show in particular and Picasso in general. There is too much grief and anger, too much rape, too much murder.

So perhaps it is no great surprise that the mild-mannered British took a while to fall in love with the dark and provocative Spaniard.

A famous story has the president of the Royal Academy, Sir Alfred Munnings, leaving the building where this show takes place in 1949, and asking Winston Churchill what he would do if he saw Picasso walking down Piccadilly in front of them. 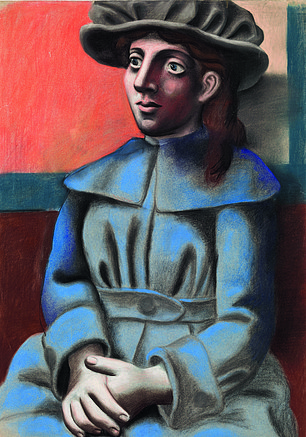 Girl In A Hat With Her Hands Clasped, 1921. As ever with the good artist, even if you think you know the work from reproductions it’s worth coming to see for yourself

According to Munnings, Churchill — who disapproved of Picasso’s non-representional style and left-wing politics — replied: ‘Kick him up the arse, Alf.’

The former prime minister was embarrassed and angry about the anecdote, but it captures a little of the official hostility to Picasso, which lasted long after the Second World War.

While Picasso spent the war in Nazi-occupied Paris, he was regularly harassed by the Gestapo. During one search of his apartment, an officer saw a photograph of Guernica.

It is thanks to the huge generosity of the Picasso Museum in Paris, which has loaned a large proportion of the best works here, that he gets his own back on Churchill and co now.

Indeed, the director of the Musee Picasso has dryly mused that it’s nice to see its London branch finally opening in Piccadilly. Well, Paris’s loss for the next few weeks, is London’s gain.

If you are interested in modern art in any way, you simply have to see this show. Give yourself a lot of time and, if necessary, borrow one of the collapsible chairs they offer.

It’s grey outside but do make the effort. I can’t imagine there will be a more comprehensive and thoughtful exhibition of this giant of modern art in my lifetime.

But do not come here, please, expecting to be soothed. Scornful of his rivals, touchy, promiscuous and blazing with anger about the politics of his time, Pablo Picasso was about as tranquilising as a barbed-wire massage.

With magic in his fingers, and a flickering, butterfly mind, art’s ultimate shape-shifter ended up forcing himself to create ‘ugly’ images: because that’s how he found the world he lived in to be.

Never fall for sugar-coating, or think great art should be calming. Picasso is better than that.

Picasso And Paper is at the Royal Academy, London, until April 13.