Boris Johnson was sensationally called out by the BBC‘s Andrew Neil tonight over his continued failure to commit to a prime-time grilling on television.

All the main leaders apart from the Tory leader have now taken part in the half-hour BBC One inquisition, with critics suggested he is scared of appearing in case he makes an election-losing gaffe.

In a withering slap-down, Neil questioned how the PM hoped to face down strongmen such as Vladimir Putin on the world stage if he was even too frightened to be challenged by the veteran broadcaster.

In a stinging swipe, he said Mr Johnson’s decision to sidestep an interview further fuelled accusations that he is untrustworthy and his campaign pledges to not stand up to scrutiny.

Staring straight down the camera, Neil said: ‘The Prime Minister of our nation will at times have to stand up to President Trump, President Putin, President Xi of China.

‘So we’re surely not expecting too much that he spend half an hour standing up to me.’

And in a last-ditch attempt to lure Mr Johnson into the studio, he added: ‘It is not too late. We have an interview prepared. Oven-ready, as Mr Johnson likes to say.’

‘The theme running through our questions is trust – and why at so many times in his career, in politics and journalism, critics and sometimes even those close to him have deemed him to be untrustworthy.

‘It is, of course, relevant to what he is promising us all now.’

Neil also appealed to the well-entrenched principle that leaders be opened up to scrutiny, saying: ‘Leaders’ interviews have been a key part of the BBC’s prime-time election coverage for decades.

‘We do them, on your behalf, to scrutinise and hold to account those who would govern us. That is democracy.’ 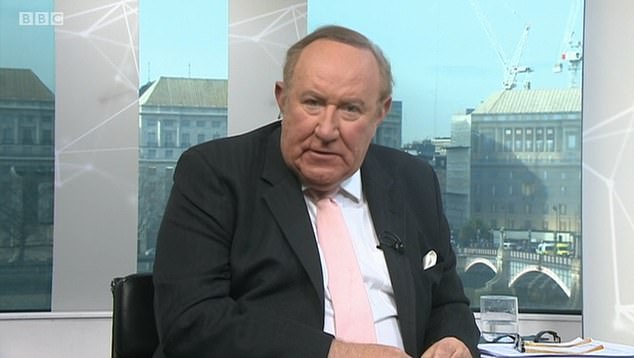 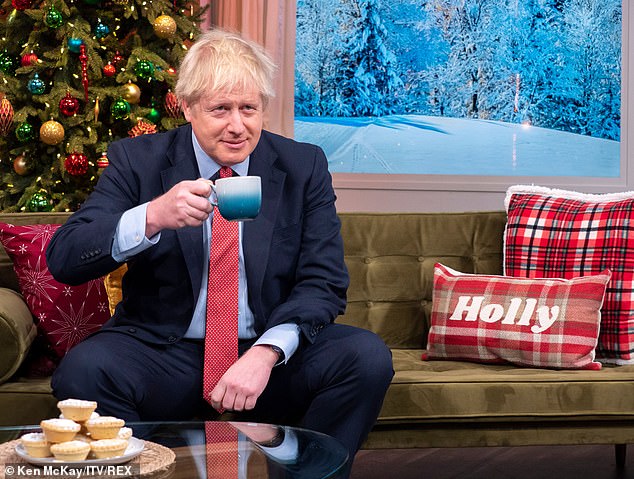 Mr Johnson appeared on This Morning today with Philip Schofield and Holly Willoughby, seen as a pretty soft interview

‘We have always proceeded in good faith that the leaders would participate. And in every election they have. All of them. Until this one.’

Mr Johnson’s political rivals have scorned his blunt refusal to appear before Neil since it emerged he intended to sidestep an interview.

‘How can we expect Johnson to stand up to Trump or Putin if he won’t even agree to a half-hour interview with Andrew Neil?’

The BBC has faced criticism itself for not tying Mr Johnson in to a time or date for an interview with Mr Neil before other leaders took part.

Mr Johnson appeared on the BBC’s Andrew Marr show on Sunday after an initial stand-off with the BBC, and today he appeared on This Morning with Philip Schofield and Holly Willoughby.

But he continues to swerve Mr Neil with a week to go until the election and has also refused to sit down with ITV’s Julie Etchingham.

Every other leader of Britain’s major political parties has agreed to appear on ITV’s Tonight programme, but Johnson’s team confirmed on Thursday that he would not be taking part.

Neil’s monologue continued to question the PM’s bold election pledges: ‘Can he be trusted to deliver 50,000 more nurses? When almost 20,000 in his numbers are already working for the NHS.

‘Can he be believed when he claims another 34 will be built in the five years after that?

‘Can he be trusted to fund the NHS properly, when he used a cash figure of an extra £34 billion?

‘After inflation, the additional money promised amounts to £20 billion.

‘He vows that the NHS will not be on the table with any trade talks with America. But he vowed to the DUP, his unionist allies in Northern Ireland, that there would never be a border down the Irish Sea.

‘That is as important to the DUP as the NHS is to the rest of us. It is a vow his Brexit deal would seem to break.’

‘He’s running scared because every time he is confronted with the impact of nine years of austerity, the cost of living crisis and his plans to sell out our NHS, the more he is exposed.’