Angry locals in Devon and Cornwall have lambasted tourists as hordes of caravans have descended upon Cornish beauty spots.

Holidaymakers have been taking advantage of the eased lockdown restrictions and are heading to popular destinations all over the country to try and get a break.

But locals are so enraged they have hung a sign up telling visitors to ‘f*** off.’

The crude 6ft long banner – written in black paint on a white board – was held aloft by three people, their faces hidden by it.

They stood on the bridge over the A30 at Bodmin, one of the main roads into Cornwall for holidaymakers. 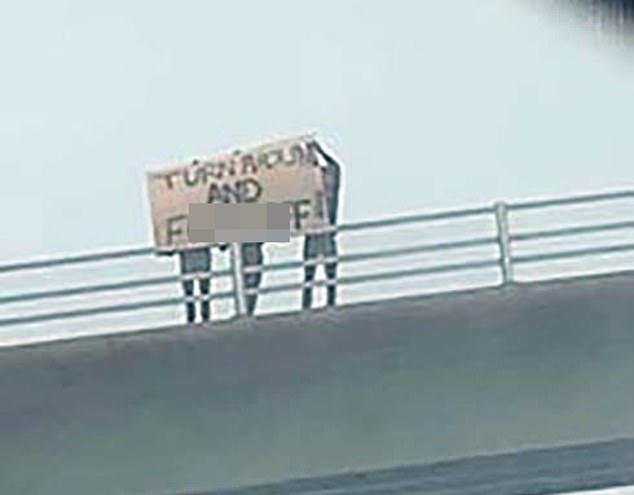 The crude 6ft long banner – written in black paint on a white board – was held aloft by three people, their faces hidden by it 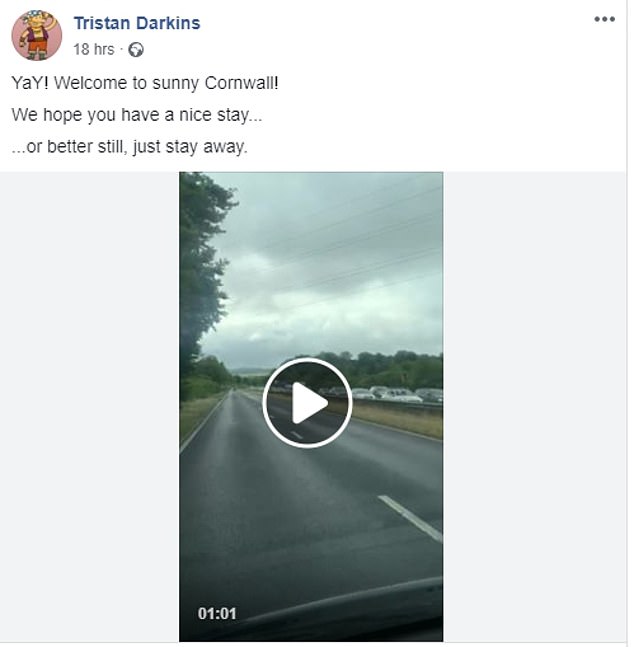 Cornwall’s tourism chief has slammed the ‘offensive and unforgivable’ sign.

Malcolm Bell, chief executive of Visit Cornwall, said outsiders are welcome and the region, which relies heavily on tourism, desperately needs their money.

Celebrity chef Gordon Ramsey angered locals when he and his family moved to their second home in Cornwall during the lockdown.

Residents say Cornwall has only one major hospital and a flood of holidaymakers puts their lives at risk.

Hundreds of thousands of tourists have started arriving in Cornwall and neighbouring Devon following the relaxation of banning measures on Super Saturday.

Many residents have voiced their concerns on social media, saying it is too soon to lift the ban on holidaymakers and second home owners. 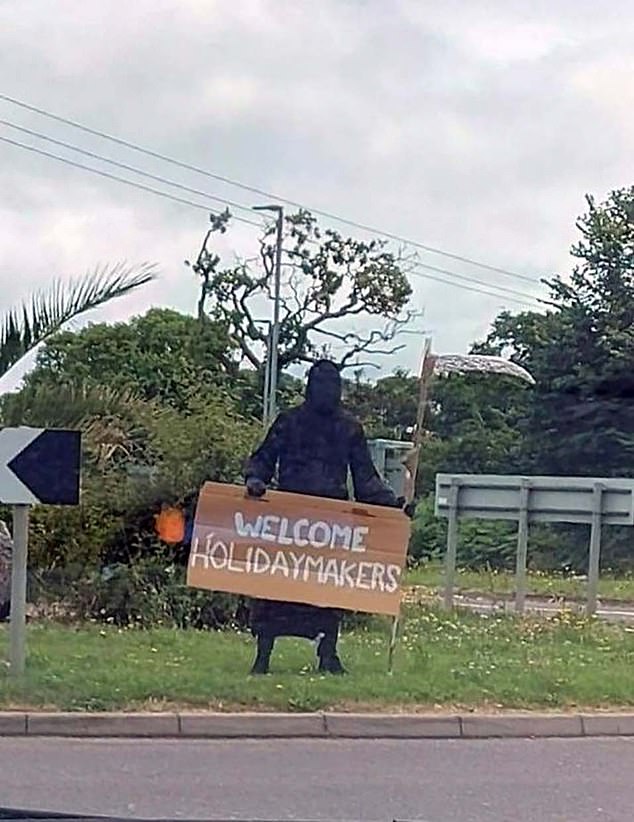 But Mr Bell said the West Country resorts won’t survive without the money that outsiders spend in shops, pubs and attractions.

‘We are battling to save thousands of jobs. Let’s welcome our customers, who will share their money to keep Cornish people in jobs.

‘I don’t like to see signs like the one we saw on the A30. It is being offensive to a large group of people. I find it unforgivable.’

He understood residents’ concerns but they should not assume outsiders were bring infections to the region.

‘It’s accusing people before they even arrive.’

Feelings are running just as high in Devon – tourists arriving in Dawlish yesterday afternoon were greeted by a man dressed as the Grim Reaper.

But, showing not all residents share his opinion, he was challenged by two men who seized the sign from him.

It is estimated that about 80,000 holidaymakers will be in Cornwall this week – which is 15% to 20% down on usual numbers for this time of year.

And tourists have been warned a sudden cough may mean they have to isolate in their room or caravan and pay for an extra 14 days’ stay.

The warning about being forced to stay for an extra fortnight – and pay for it – if you show signs of the virus is in an information pack issued to all accommodation providers.

It’s been put together by Visit Cornwall with help from public health officials and tourism businesses.

Visit Cornwall chief executive Malcolm Bell said ‘If people fall ill on holiday and can’t travel back safely using their car they will have to pay for their 14 days in isolation.

‘We have to make that clear as the business will be losing trade.’ An extra 14 days would throw the system into chaos for many accommodation providers.

They would have to tell the next people who’ve booked that room or caravan for a holiday to stay at home.

He said the information sheets would be distributed to businesses and placed in accommodation for staycationers when they arrive.

‘We are reinforcing the think, plan, book message and we talk about beaches and the idea that they have to have a plan B.

‘If they turn up and the beach is busy, be ready to go on somewhere else.

‘We also say that we want you to go TO the beach, not go ON the beach, regarding bodily functions.

‘We also have strong messages from the RNLI and coastguard about being safe on the beach and in the water. The last thing we need is additional strain on the blue light services.’

He said not all accommodation providers would be opening this weekend with many large holiday parks delaying till Monday and some hotels until later next week.

He added that this was because they were having to bring back staff from furlough and making sure they are ready for guests.

Mr Bell said that some would be running at 50 per cent occupancy in the first few days.

It was expected there could be between 75,000 and 80,000 visitors coming to Cornwall which he said was 30 per cent down on usual numbers for this time of year.

‘It will feel a lot busier and the roads will feel busy as we haven’t had the run up that we normally have. But it won’t be as busy as normal at this time of year.

‘I have heard of people wanting to come down at midnight on Saturday but places have been sensible and said come down at the normal times.’

Cornwall Council leader Julian German ‘For some, the closed signs will remain in place – the sign of the human cost of this crisis on our communities not only in lives lost but livelihoods too.’