Arlene Foster today warned Theresa May she expects her to respect the DUP’s ‘red line’ that no new checks are brought in between Northern Ireland and the UK after Brexit.

The DUP leader made her stark warning after she held talks wiht the EU’s chief Brxit negotiator Michel barnier in Brussels today.

And she also revealed that her party has not yet been shown the PM’s new plan to avoid a hard Irish border post Brexit – despite propping Mrs May up in Number Ten.

Speaking at a press conference after talks with Mr Barnier this morning, she said: ‘There cannot be any customs or regulatory bariers between ourselves and the rest of the United Kingdom….

‘The Prime Minister understands our position and I expect her to respect that position.’

Her stark words come after she warned the creation of new checks between Northern Ireland and the UK would be ‘catastrophic’.

The DUP leader said she will not tolerate her ‘red line’ being crossed ahead of her meeting with the EU’s chief negotiator. But she also hinted the DUP could be slightly softening its position as she said she wants a ‘sensible’ Brexit that also works for the Republic of Ireland.

Mrs Foster tweeted a photograph of herself at the meeting and wrote: ‘As outlined in par 50 of the Dec 2017 joint report, there cannot be barriers to trade erected between NI [Northern Ireland] and the rest of the UK. GB is our main market.

‘The UK voted to leave the EU. Result must be respected. The nation must leave together.’

Her stark warning comes as the Brexit negotiations enter their final crucial stages as Theresa May has just weeks left to thrash out a deal her mutinous Tory MPs and the EU will sign up to.

Mrs Foster could hold the balance of the power in the talks as her ten MPs are propping Mrs May up in No10 in a confidence and supply deal. 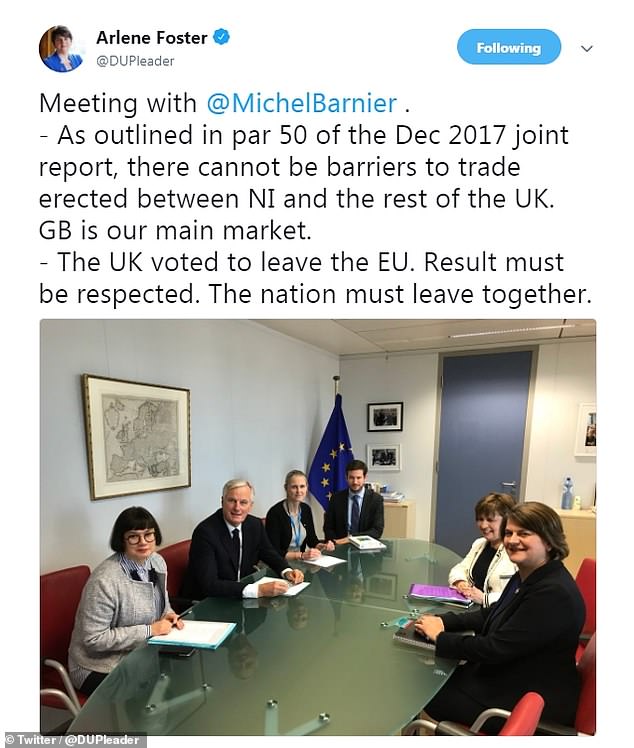 If she does not agree to the deal then she could pull support for the PM and send her Government crashing down.

Speaking in advance of the visit Mrs Foster said: ‘We want the June 2016 referendum result to be respected and implemented. 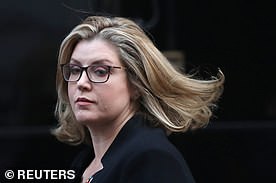 Theresa May is facing a mounting Tory mutiny today as a Cabinet minister refused to endorse her Chequers plan.

The careful words from the Brexiteer – thought to harbour leadership ambitions – will fuel speculation about Mrs May’s position.

The premier gathered her Cabinet today amid a mounting crisis as she tries to thrash out a Brexit deal with the EU.

But before the meeting started, Ms Mordaunt was grilled on her views as she delivered a speech on international aid.

Asked directly to endorse Chequers, she replied that she would not give a ‘running commentary’.

‘The Prime Minister can count on my support. But what I would say is that we don’t know where this is going to end up. We are at a critical moment now,’ she said.

‘The ball is firmly back in the EU’s court; we are waiting for them to respond.’

‘A majority of people throughout the United Kingdom voted to take back control of their money, laws and borders. Whilst many in Brussels may not agree with the referendum outcome, the result must be respected.

‘As we leave the EU, we should do so as one nation. The United Kingdom single market must be protected with no new borders between Northern Ireland and Great Britain being created.

‘From day one this has been the DUP’s only red line. This red line is recognising that Great Britain is Northern Ireland’s biggest market.

‘Over 70 per cent of all goods leaving Belfast port are destined for Great Britain. To create a barrier to that trade would be catastrophic.’

Reiterating her ‘red line’, the DUP leader said Northern Ireland must stay a full part of the United Kingdom and be able to benefit from new trade deals the country strikes after Brexit.

She said: ‘We want to see an exit deal which means Northern Ireland has unfettered access to and from the GB market but also fully beneficiaries of any new trade deals with the United Kingdom after Brexit.

‘Many who claim to respect the Belfast Agreement, fail to respect the principle of consent which was part of that Agreement. Indeed, they would happily redraw the border and annex Northern Ireland away from the rest of the UK.’

And in a sign her tone might be softening, she said: ‘Finally, I want to see the United Kingdom exit the EU in a sensible manner which works for each part of the UK but also importantly in a way that works for our nearest neighbour in the Republic of Ireland.’

The EU has demanded that the UK sign up to a ‘backstop’ deal which would see Northern Ireland stay tied to some single market and customs rules.

But Mrs May and the DUP have both  said this is unacceptable as it would effectively crate a border through the United Kingdom down the Irish Sea.

The PM is preparing to table revamped proposals for a ‘backstop’ to prevent a hard border between Northern Ireland and the Republic in the coming days. 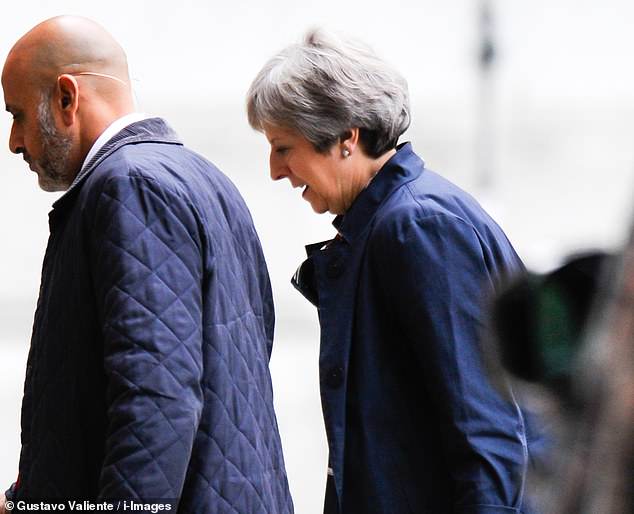 Mrs May has proposed that all of the UK remained tied to the customs union until 2021.

And she is expected to unveil new concessions on how single market regulations can be enforced – although Mrs May will hold the line that the province cannot be split from the rest of the UK’s customs jurisdiction.