At least 29 people are reported to have died after a coach went off the road in a hotel district on the holiday island of Madeira.

The coach was heading to Funchal, the island’s capital, and was carrying 55 passengers and a guide when it careered off the road near the town of Canico.

Filipe Sousa, the mayor of the nearby town of Santa Cruz, said 12 men and 17 women died in the crash – the majority of whom were German nationals.

Another 22 were injured in the accident, according to the Portuguese national news agency Lusa. 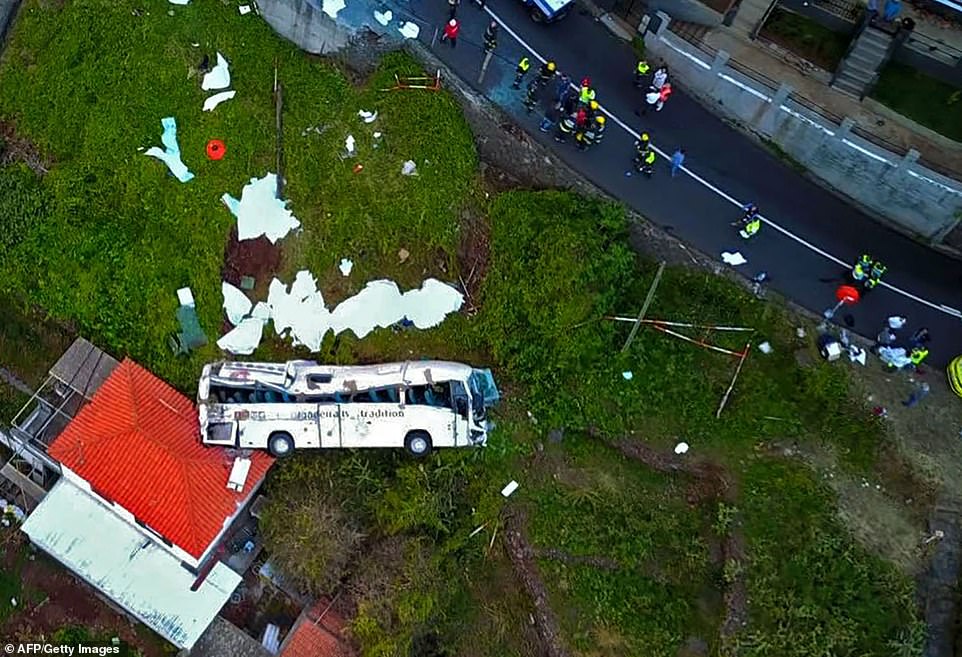 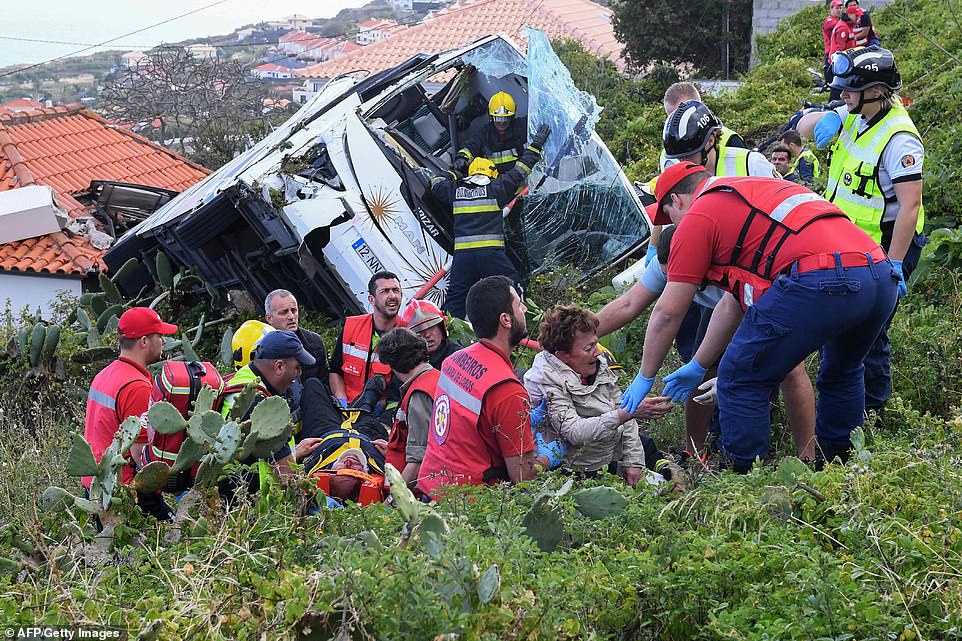 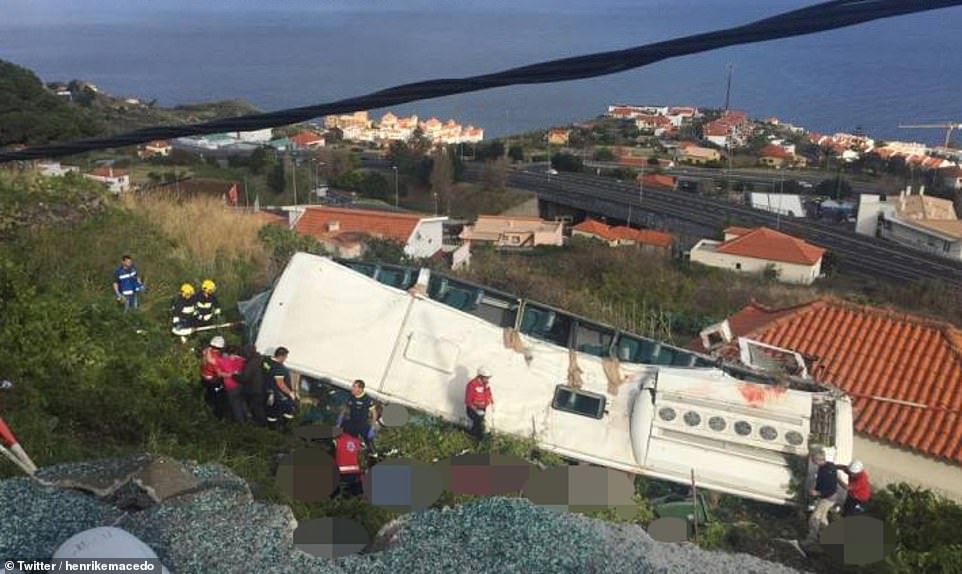 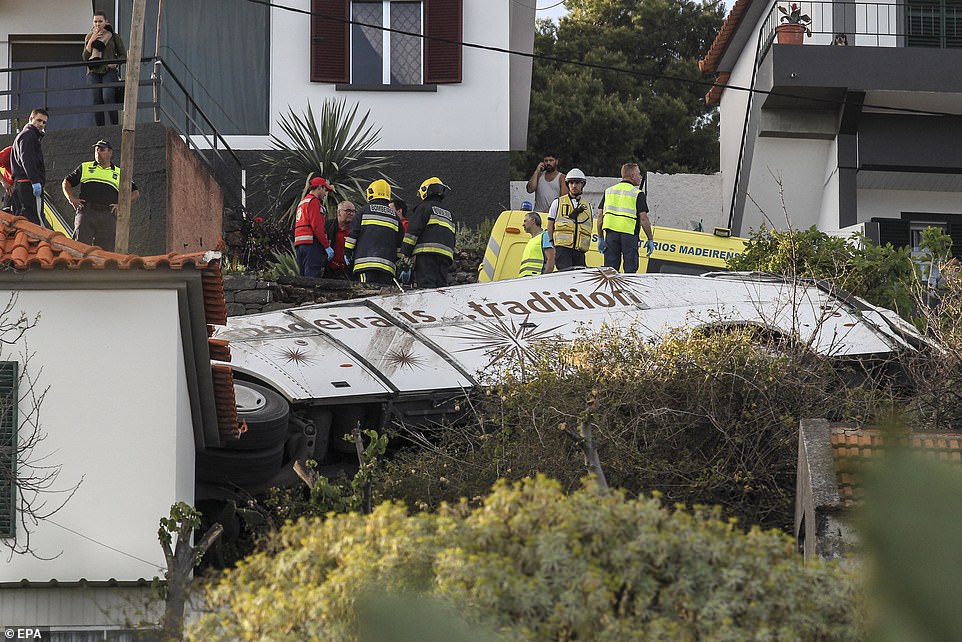 
The driver and the guide, who are both Portuguese, were hurt in the crash but it is not yet known how seriously they were injured.

Local reports said the driver lost control of the vehicle on a bend, careered off the road and crashed onto the top of a house.

The bus overturned after falling off the winding mountain road near a remote hotel – the Quinta Splendida Wellness & Botanical Garden.

The passengers were believed to be on their way for a meal at the time of the accident.

A receptionist at the hotel, confirmed the bus had crashed nearby but said none of the hotel guests had been involved.

Emergency services were first contacted at around 6.30pm local time and at least fourteen ambulances attended the crash site.

A massive cordon has been set up, while shocked locals have gathered nearby.

Distressing video showed the walking wounded being helped away from the scene by emergency responders. Several survivors were sat by the side of the road.

Mayor Sousa said: ‘I have no words to describe what happened. I cannot face the suffering of these people.’ 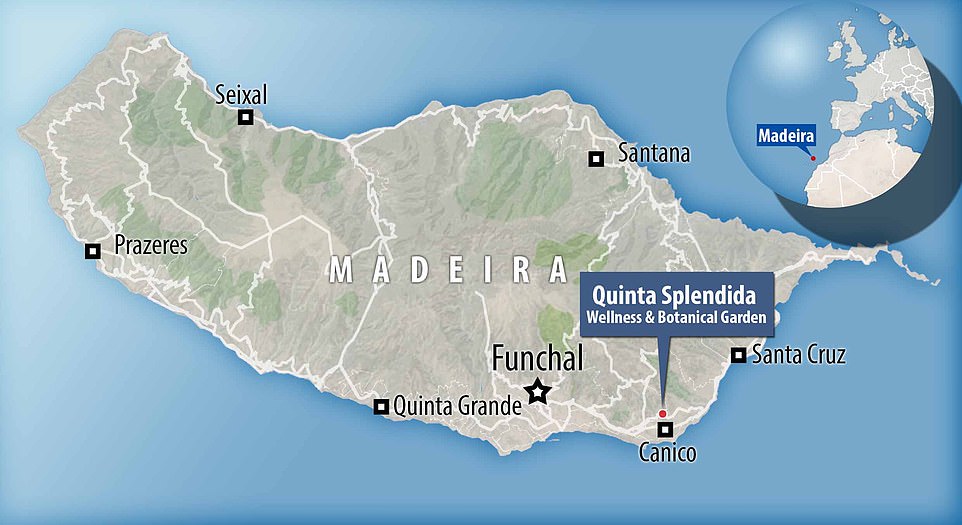 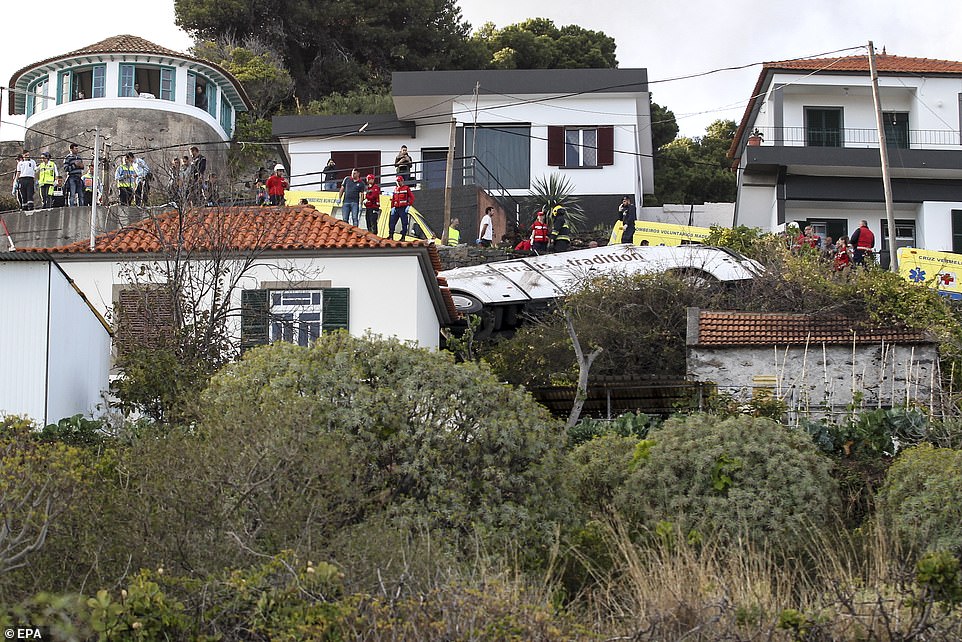 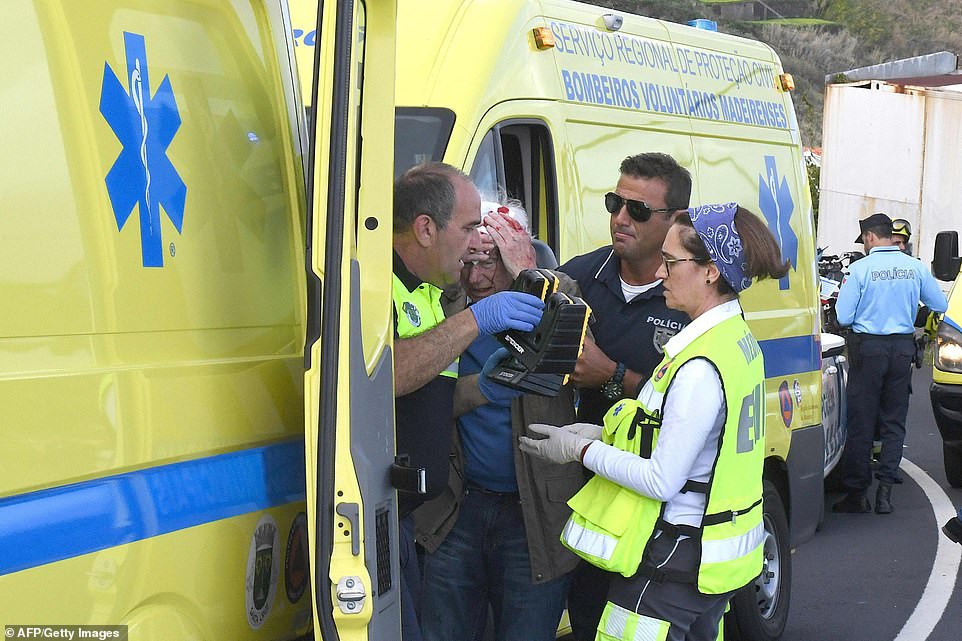 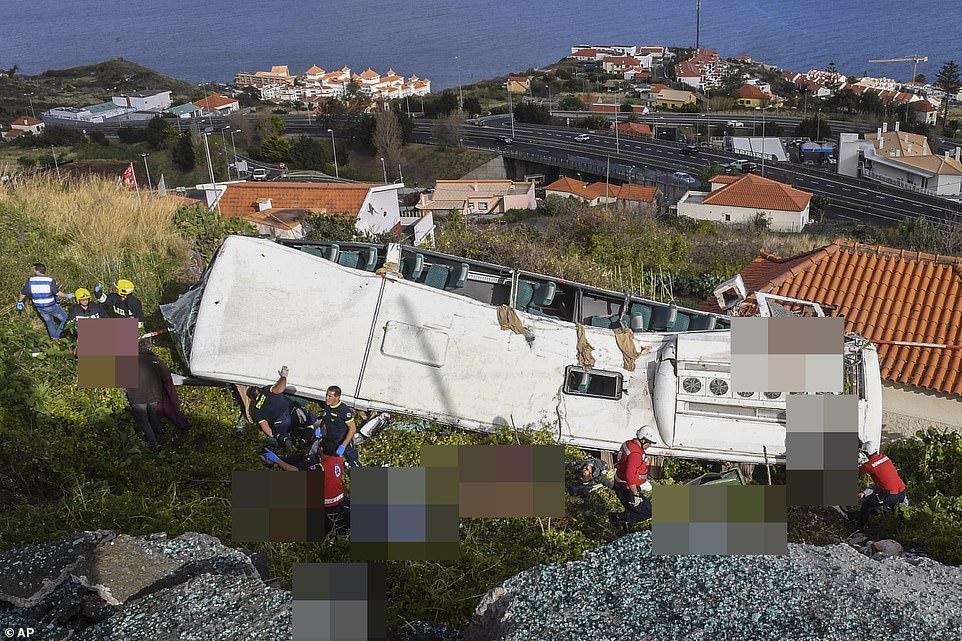 Regional MP Roberto Almada described the area where the coach went off the road as an ‘accident blackspot’.

He said: ‘This is an area that is relatively close to the town of Canixo.

‘Before the spot where the coach went off the road, there’s a very sharp bend that goes from west to east and there’s been many accidents there in the past.

Although it was initially announced Portuguese President Marcelo de Sousa would travel to Madeira on a military jet, it later emerged the trip had been suspended for the time being because the plane was needed to transport casualties.

He told journalists: ‘The priority is to treat victims, not my trip to Madeira.’

The Foreign and Commonwealth Office (FCO) added: ‘We are seeking information from the authorities in Portugal about a bus crash in Madeira, and are ready to support any British people who require assistance.’

Prime Minister of Portugal António Costa tweeted: ‘It was with profound regret that I had learned of the tragic accident in Madeira. All the families involved transmit, on behalf of the Portuguese Government, the most felt condolences.

‘I also want to send a word of consternation and support to the Madeirans. I have also had the opportunity to convey the vow of grief to Chancellor Angela Merkel at this difficult time.’ 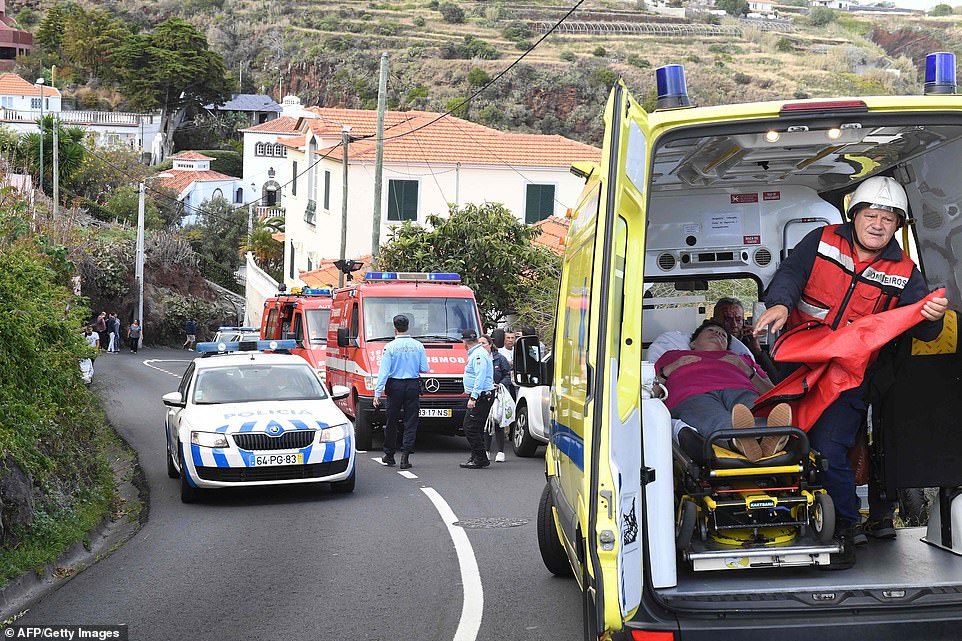 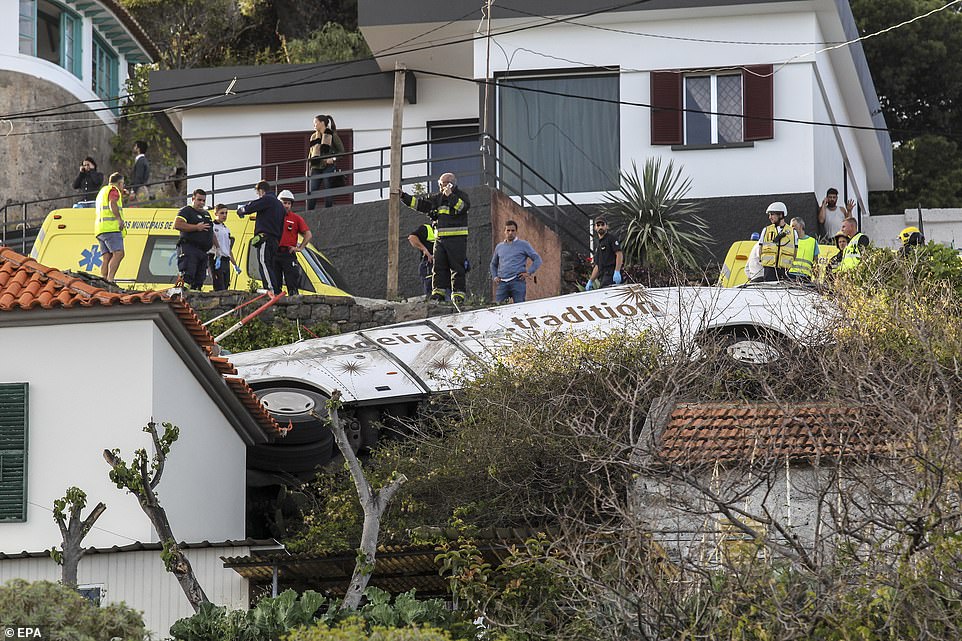 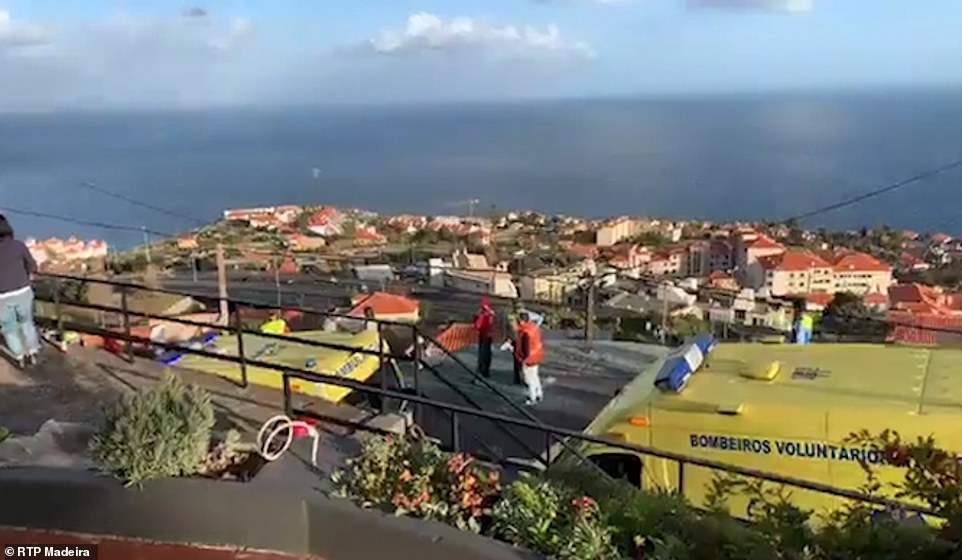 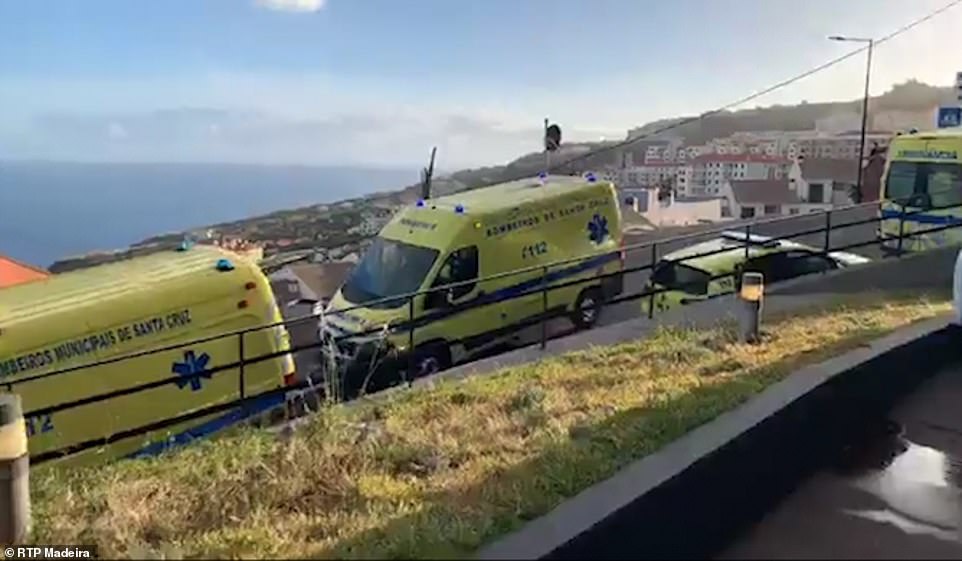