At least 700 Muslims have fled their homes in Sri Lanka fearing for their lives as tensions flare, as police raided a ‘suicide vest factory’ last night.

Police said three men blew themselves up as a blaze of gunfire erupted when they approached a jihadist hide-out near the eastern town of Kalmunai on Friday.

The battle took place in the area of Sainthamaruthu, 200 miles from Colombo where 253 people were killed in luxury hotels and churches on Easter Sunday.

It comes as hundreds of Muslims were displaced as hateful slogans were reportedly plastered across the city of Negombo. 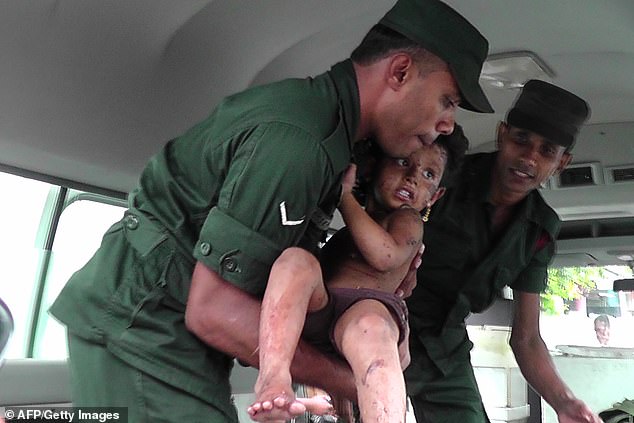 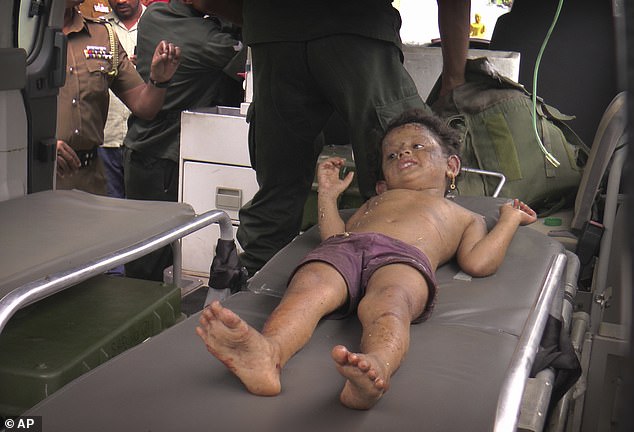 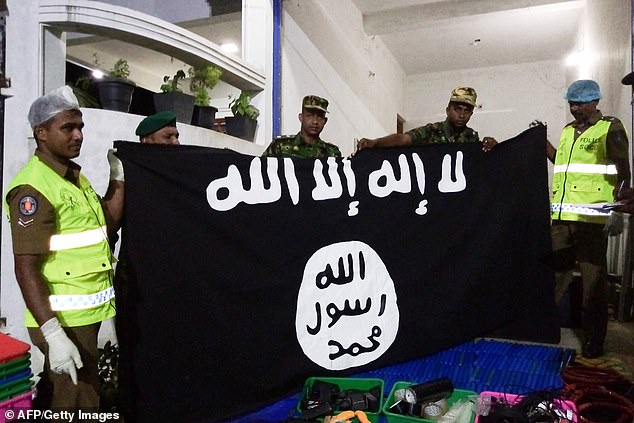 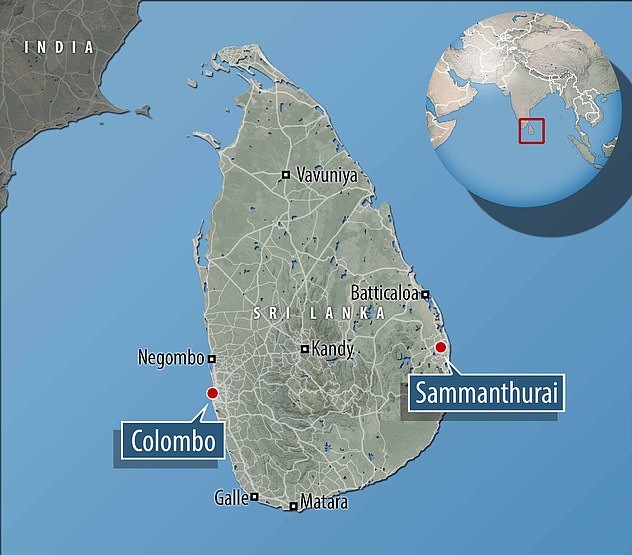 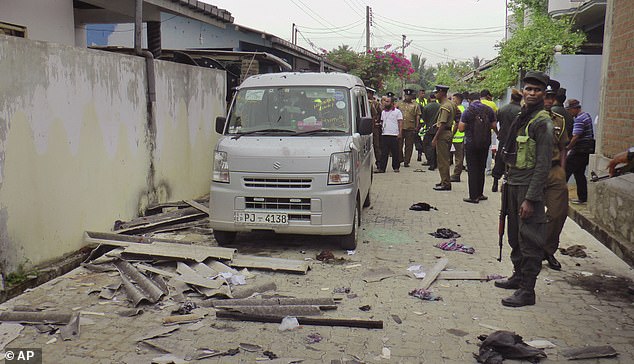 A group of 500 Muslim citizens fled from the port city to an unnamed area for sanctuary, the Guardian reported.

There were signs up saying, ‘We don’t need Pakistan refugees,’ and the Muslims claimed they were attacked.

One activist told the Guardian: ‘We’ve seen a few attacks on houses, some refugees were beaten and some stones were thrown as well so people were scared to stay in their houses.’

The group are Ahmadi Muslims who were forced to flee their native country due to sectarianism, but now say they face similar hatred in Sri Lanka.

Violence erupted ferociously again on Friday as three women and six children were killed amid explosions and gun fire in Sainthamaruthu.

As well as the three suspected jihadists who blew themselves up within the safe-house, another three suspects were discovered dead outside the property.

Police backed by troops exchanged fire with those inside the house for over an hour, a military official said, adding that the bodies were recovered early Saturday following a search operation.

‘Troops retaliated and raided the safe house where a large cache of explosives had been stored,’ a military spokesman said in a statement.

Earlier on Friday evening, a large bomb-making operation was uncovered at a raid in the Samanthurai area – around five miles away from the scene of the shootout.

Sri Lanka’s security forces said the location was believed to have been used by Islamist radicals to record a video pledging allegiance to Islamic State leader Abu Bakr al-Baghdadi before carrying out the deadly Easter attacks.

‘We have found the backdrop the group used to record their video,’ the police said in a statement.

There were 150 sticks of explosive gelignite, 100,000 ball bearings, ISIS uniforms and an ISIS flag, as well as a drone camera. 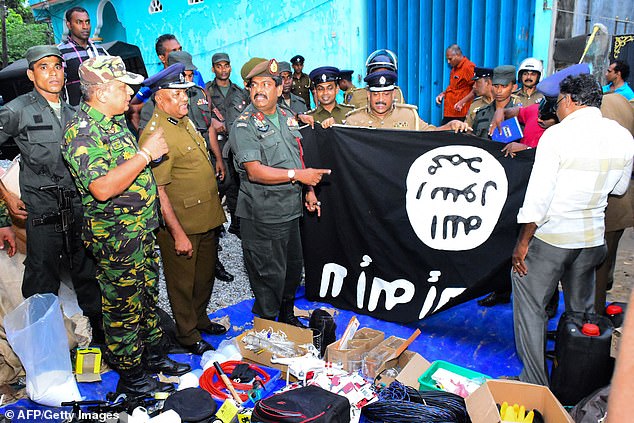 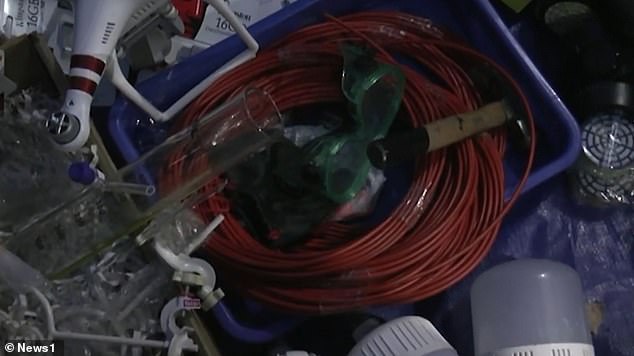 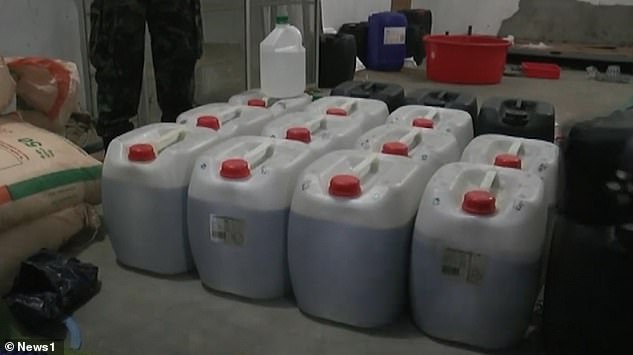 Local media reported the police took hold of a massive haul of bomb-making equipment in the Samanthurai area, around five miles away from the shootout 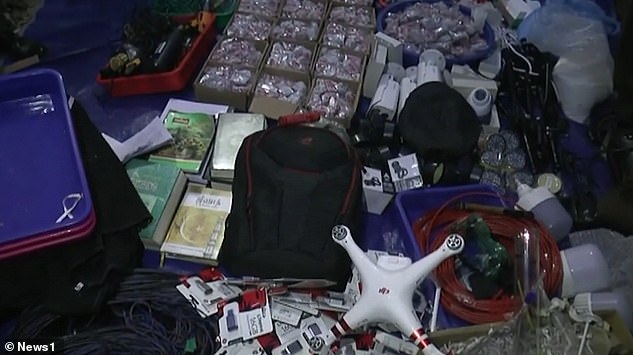 Police believed the Islamic State uniforms were similar to those worn by the eight fighters for the film they made ahead of Sunday’s attacks.

The video was released by ISIS two days after the bombings.

Photos showed what appeared to be large canisters of fuel as well as detonating devices and tubing believed to have been part of a bomb manufacturing operation, News First said.

The news comes as the country remains on high alert since the suicide bombings on churches and hotels in which more than 250 people were killed on Easter Sunday.

Police and the army have been conducting raids as they gather intelligence about the perpetrators and their supporters. Islamic State has claimed responsibility. 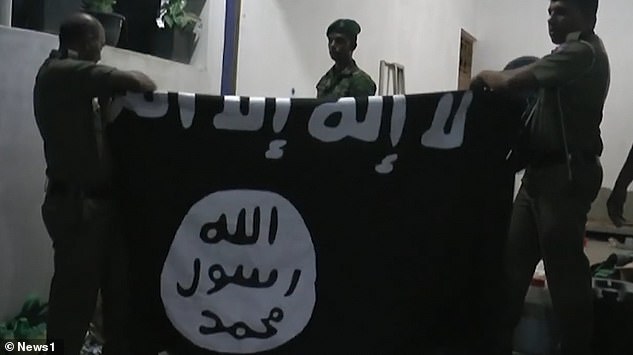 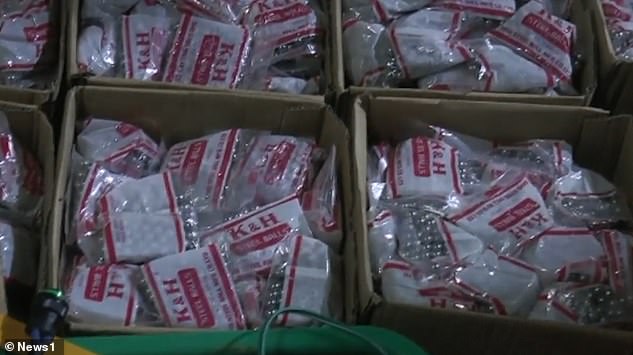 Local media reported 100,000 ball bearings were uncovered during the raid at Samanthurai as well as 100,000 sticks of explosive gelignite 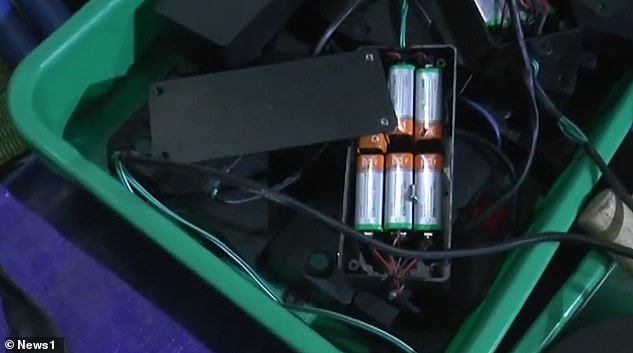 The Special Task Force uncovered a suicide manufacturing hide-out as they engaged with suspected terrorists on Friday (pictured: bomb-making equipment recovered earlier on Friday evening in the Samanthurai area around five miles away)

The government has admitted major intelligence lapses, although Prime Minister Ranil Wickremesinghe said he was unaware of any warnings ahead of the attacks, in a sign of the rift between him and President Maithripala Sirisena.

‘If we had any inkling, and we had not taken action, I would have handed in my resignation immediately,’ he told the BBC.

‘But what do you do when you are out of the loop?’

Sirisena tried to sack Wickremesinghe last year, and experts believe the feud could have played a part in Sri Lanka’s failure to act on intelligence warnings given weeks before the attacks.

EVERY football game in England 'WILL be held behind closed doors with NO games to be shown in pubs'
Boy, 10, has a kidney in his THIGH
Christmas ad tear-jerker made for £50 sees fans call on John Lewis to hire filmmaker
Vicar who asked children to dress as 'wise people' accused of political correctness
#WalkwithTom: Britons share videos as they join Captain Tom for his morning walk
X Factor: Danny Tetley and Brendan Murray ELIMINATED in ABBA week
Crufts is dog ‘abuse’, says Downton Abbey star Peter Egan
Southampton student union president 'on leave until further notice'