ATLANTA (AP) – Atlanta United scored two first-half goals and held on for a 2-1 victory over the Chicago Fire on Sunday, setting another Major League Soccer attendance record and securing a spot in the 2019 CONCACAF Champions League.

But United’s main objective, the Supporters’ Shield for the best regular-season record in MLS, will go down to the final week of the regular season. New York Red Bulls remained one point behind the Five Stripes with a 1-0 victory at Philadelphia.

United improved to 21-6-6 for 69 points, tying the MLS points record set last season by Toronto FC. The Atlanta club will get a chance to break the mark when it faces the Canadian team next Sunday in the regular-season finale.

Atlanta drew its seventh 70,000-plus crowd of the season at Mercedes-Benz Stadium, finishing with a total of 901,033 fans for a per-game average of 53,002. That easily eclipsed the mark of 48,200 that was set in its inaugural season.

United prevailed despite missing two key midfielders. Miquel Almiron didn’t play because of an ailing left hamstring, while Tito Villalba was sidelined by a leg injury.

Atlanta jumped ahead less than 10 minutes into the game on Franco Escobar’s first goal in league play. Sprinting into the area on the right side, the defender attempted to pass to Josef Martinez lurking in front of the goal, only to have the ball deflect right back to him. Escobar curled a left-footed shot inside the far post to give the home team the quick start it was looking for. 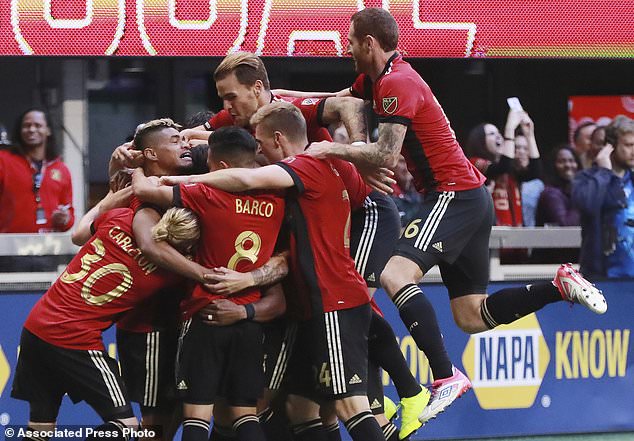 Atlanta United players mob Franco Escobar after his goal for a 1-0 lead over the Chicago Fire during the first half in a MLS soccer match on Sunday, Oct 21, 2018, in Atlanta. (Curtis Compton/Atlanta Journal-Constitution via AP)

Chicago had plenty of chances in the first half, playing against a makeshift starting group that was sloppy at times and showed its unfamiliarity with each other. Michael Parkhurst nearly scored an own goal, only to be bailed out by Brad Guzan’s brilliant save.

The Fire finally found the back of the net in the 24th minute on a play that left Atlanta pleading for an offside penalty. Michael de Leeuw wound up all alone in front of the goal with two of his teammates and Guzan didn’t have a chance, watching helplessly as the Fire player slid the ball across the line for his second goal of the season. After a video review, the play was allowed to stand.

Just two minutes later, United regained the lead with an own goal. On Chris McCann’s cross in front of the net , a sliding Johan Kappelhof deflected the ball past goalkeeper Patrick McLain to put Atlanta back in front 2-1.

Martinez remained on 30 goals, even though he had several prime chances to break what is now a four-match scoring drought. Most notably, the top season scorer in MLS history was stuffed by McLain in the second half after receiving a pass all alone in front of the Chicago goal.

Atlanta locked up its first appearance in the Champions League by compiling the most points over the last two seasons, joining fellow MLS teams Toronto, Houston and Sporting Kansas City. The league will get one more squad in the 16-team tournament. 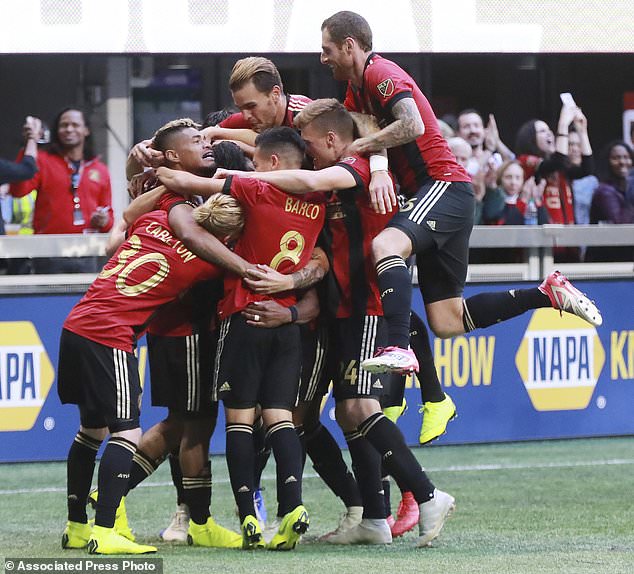 Atlanta United players mob Franco Escobar after his goal for a 1-0 lead over the Chicago Fire during the first half in a MLS soccer match on Sunday, Oct 21, 2018, in Atlanta. (Curtis Compton/Atlanta Journal-Constitution via AP)

Piece of Earth's ancient oceans preserved underground for 20,000 years
Father saves daughter when she stopped breathing after swallowing penny
Chancellor Sajid Javid is 'livid' over sacked aide
Prince George wears trousers for the first time in an official portrait
Revellers enjoy a VERY merry Christmas as they hit the tiles on Thirsty Thursday
Letter by business leaders to call for vote on Brexit...
Prince Harry greets landmine victim who famously brought Diana to tears 22 years ago in Angola
Shamed Labour MP Fiona Onasanya is expelled from her party