Rick Astley played a cover of an AC/DC song at the Isle of Wight festival on Saturday – and crowds were left both confused and impressed.

The singer, 53, who is famous for his eighties power ballads, put his drumming skills to the test and left the unsuspecting audience stunned by his performance of ‘Highway to Hell.’

Despite being renowned for hits including ‘Never Gonna Give You Up,’ Rick lit up the main stage with his version of the rock song – and left many surprised by his hidden talent.

‘I’m never drinking at lunchtime again,’ wrote one. ‘I think I just woke up to Rick Astley singing AC/DC. Pretty sure it was a dream as he was playing the drums,’ while another penned: ‘Rich Astley doing AC/DC’s Highway to Hell – what’s happening to the world?’ 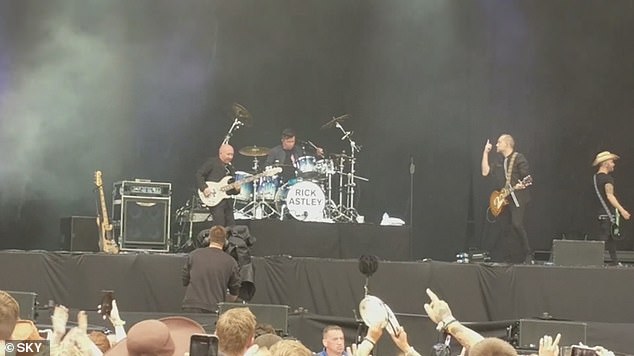 Singer Rick Astley, 53, impressed fans with a cover of  AC/DC’s ‘Highway to Hell’ during his set at the Isle of Wight Festival on Saturday

As the eighties icon finished his set on the main stage, the audience didn’t quite know what to make of the random performance

As well as playing his own set, Rick later joined Bastille onstage and drummed along to their hit tune ‘Pompeii’ as thousands of fans cheered.

Taking to social media to discuss what they had just witnessed, many were left confused by the random choice of song.

‘Rick Astley playing drums whilst singing AC/DC at the Isle of Wight Festival, not a chance when I woke up this morning did I think I’d see that happen today,’ said one, while a second commented:

‘Why is Rick Astley singing Highway to Hell at Isle of Wight Festival 2019? Has someone spiked my peppermint tea?’ 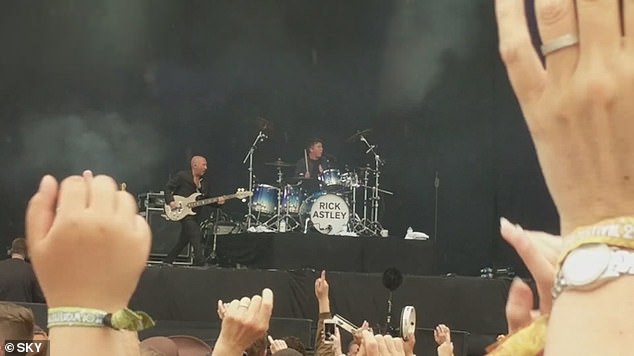 Rick could not resist hitting the drums during his own set (pictured) and he later joined Bastille, where he played along to their hit song, ‘Pompeii 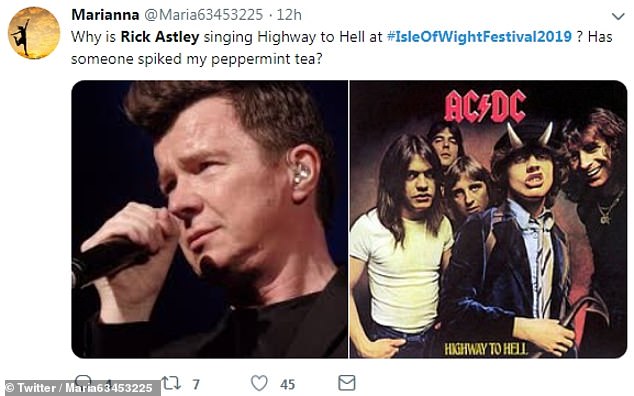 Meanwhile, a third bluntly commented: ‘What I have just watched Isle of Wight and Rick Astley doing AC/DC Highway to Hell.’

But while many found the whole concept confusing, the majority were left impressed by the icon’s performance.

‘Rich Astley singing Highway to Hell as he was playing the drums is the highlight of Isle of Wight Festival 2019 for me, so far,’ said one, while a second added:

‘Watching the Isle of Wight Festival… Never thought I would hear Rich Astley sing AC/DC’s Highway to Hell whilst playing the drums!!’

‘Nor did I expect him to come out and play drums and sing Pompeii with Bastille. What an evening, surreal but it totally worked.’

Those that tuned in weren’t sure what to make of the cover, with one penning: ‘What I have just watched Isle of Wight and Rick Astley doing AC/DC Highway to Hell’

Bastille fans were also surprised by his presence on stage, but were equally as fascinated by the unexpected collaboration.

‘Fell asleep because I was exhausted after yesterday, woke up and Bastille are performing Pompeii with Rick Astley? Is it real life?’ joked one festival goes.

As social media reaction was inundated with praise for the eighties legend, Rick looked like he was having a blast onstage and later thanked Bastille on Twitter.

‘Thanks for having me on stage with you tonight Bastille, what a great night Good luck with the new albums Doom Days, Million Pieces is already a banger, Rick x,’ he wrote. 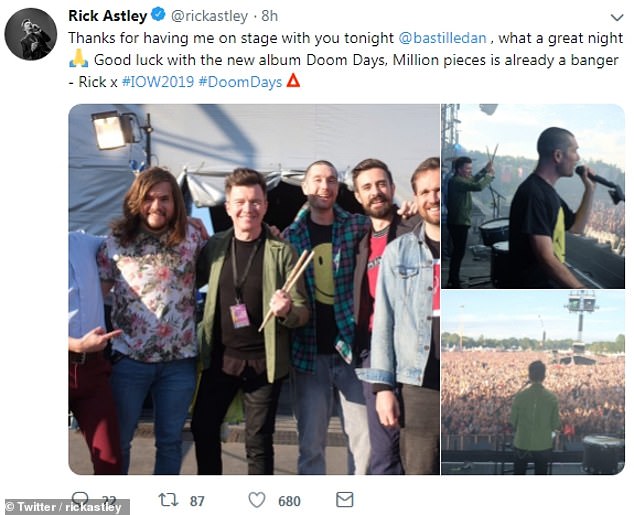 Taking to Twitter following his performance, Rick Astley thanked Bastille for welcoming him on stage during their set and wrote: ‘What a great night’