A baby boy who was hit in the eye with a golf ball was left screaming as ‘blood poured down his face’ – with a suspect later getting involved in a 20-man brawl.

The three-month-old child has been left seriously injured after the shocking incident at 8.40pm last night in Radley’s Park, Sheldon, Birmingham.

A 36-year-old man has been arrested on suspicion of assault and is currently in hospital – though his condition is not known.

Mother-of-two Katie, 27, who lives near the park, said: ‘I heard screaming and looked out of the window and saw somebody holding a baby. 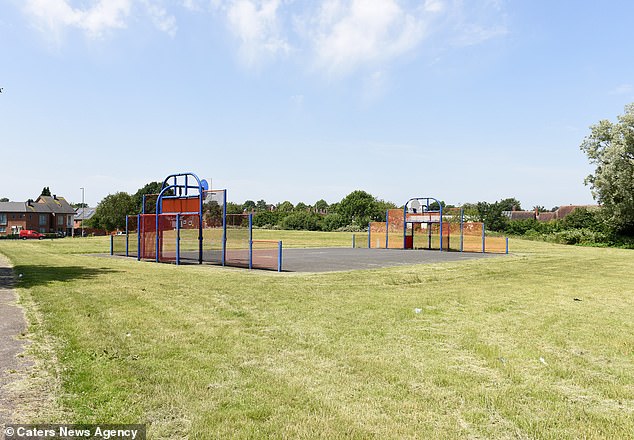 A man has been arrested after the three-month-old boy suffered the horror injury on a playground in Radley’s Park (pictured), outside Radley Court in Sheldon, Birmingham

‘I happened to open the door and saw a woman run past, I think going back to hers. I asked if she was OK.

‘She said she had called an ambulance because her baby had been hit in the eye and blood was pouring down its face and needed a wet cloth.

‘The man who hit the golf ball from the other side of the park had two young children with him. 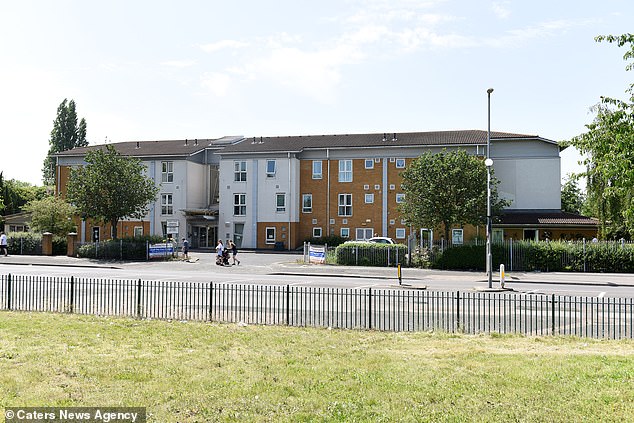 The 36-year-old man was arrested on suspicion of assault. He is currently in hospital – though his condition is not known. Pictured: The park from above with surrounding playing fields

‘He tried to run off and a group of youths ran towards him and asked him to do the decent thing and wait for the ambulance.

‘Then he head butted one of the youths and a fight kicked off with about ten people in the middle of the road. A random car drove past and stopped to pick up the man and his children.’

Tolla Begum, 30, who lives opposite the park with her three sons who are ten, seven and six, said: ‘I was doing the gardening and I saw loads of people in the park arguing.

‘A younger man was shouting at an older man with two children. There was a group of kids of secondary school age. The argument was getting angry.

‘Then suddenly about 20 people were fighting in the road. It seemed it was something about children. Cars had to swerve to miss them.’

An ambulance crew, who raised the alarm with police, rushed the toddler from Sheldon Heath Road to hospital where he remained on Saturday morning. 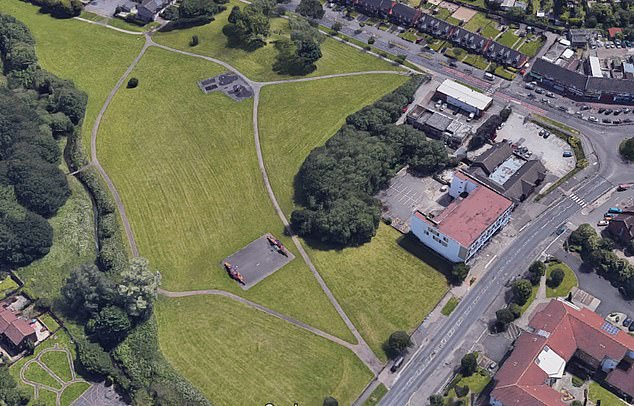 Tolla Begum, 30, who lives opposite the park with her three sons, said: ‘Suddenly about 20 people were fighting in the road. It seemed it was something about children. Cars had to swerve to miss them’

West Midlands Police has launched a major investigation into the incident.

Anyone with information is urged to get in contact with police immediately.

A full statement from the force read: ‘Officers were alerted by ambulance colleagues to reports that a baby had been hit in the eye with a golf ball on a playground outside Radley court on Sheldon Heath Road, just after 8:40pm last night.

‘The three-month-old baby boy was taken to hospital with a serious eye injury, where he remains this morning.

‘A 36-year-old man was arrested on suspicion of assault and is currently in hospital.

‘An investigation is underway and anyone with information is asked to contact police via Live Chat at www.west-midlands.pnn.police.uk between 8am and midnight or call 101 anytime.

Bella Hadid and Amber Heard sizzle at the Pain and Glory premiere during Cannes Film Festival
EU diplomats 'fear Boris Johnson has no intention of negotiating a new deal'
Jonathan Cheban rocks edgy top as he arrives at Craig's in West Hollywood
New Green MEP Magid Magid 'is asked to leave European Parliament' on his first day
End of fairytale for Autumn Phillips who fell for husband Peter before realising he was a royal
Twitter mocks Boris Johnson for cancelling EU press conference amid protests
Van thief escapes police by leaping from stolen vehicle to sprint across six lanes on the M61
Watership Down: Viewers BLAST show for its 'awful' CGI