A handful of climate change, left-wing, pro-Palestine and anti-war activists gathered outside Dublin’s Garden of Remembrance to protest against Donald Trump, even though he was 180 miles away on the other side of Ireland.

The President joined world dignitaries in Normandy today for the commemnoration of the 75th anniversary of D-Day, then returned to his golf resort in Doonbag, Co Clare, via Shannon airport on the west coast of Ireland.

But in the capital, a giant balloon representing the US president as a baby floated overhead, buffeted by the light spring evening breeze.

Pro-choice abortion campaigners joined the crowd and said they stood in opposition to what they claimed were the sexist views of the president, with the organisation Rosa stating: ‘Let’s struggle to end the politics of Donald Trump.’ 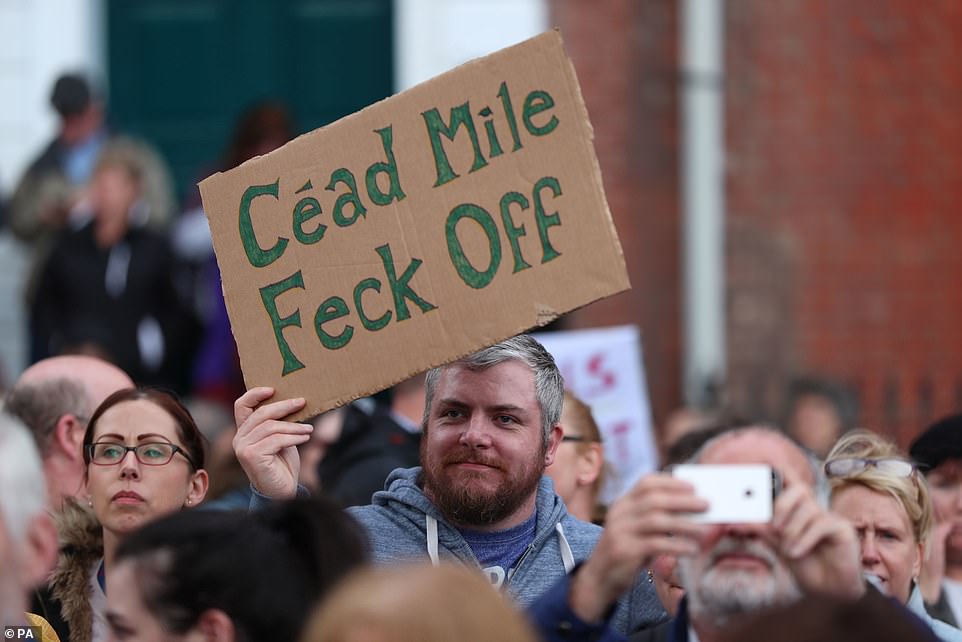 Irish protestors gave President Trump a colourful welcome today on his return from Normandy – or would have done, if the President had not been hundreds of miles away on the other side of the country 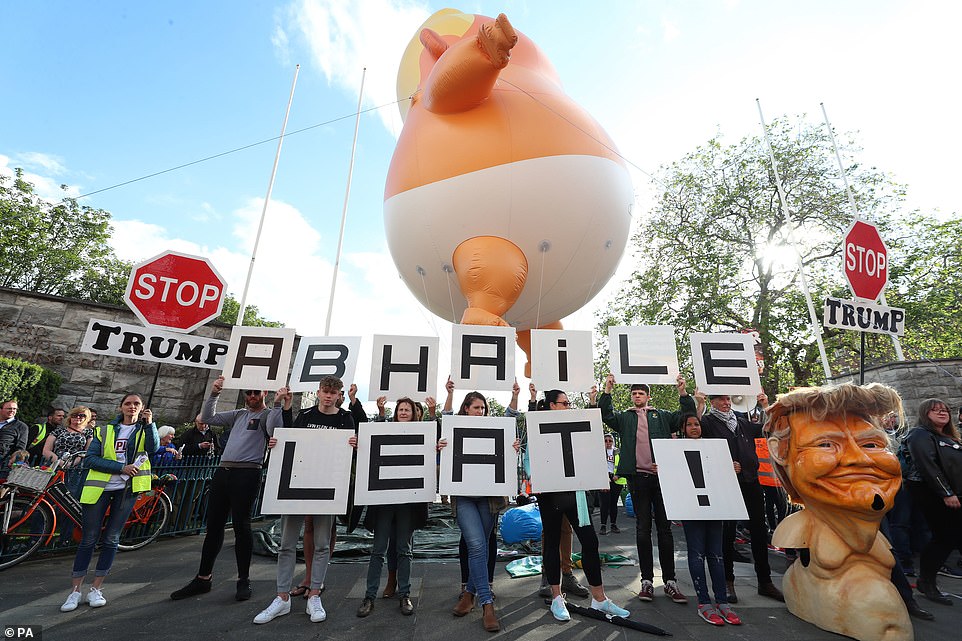 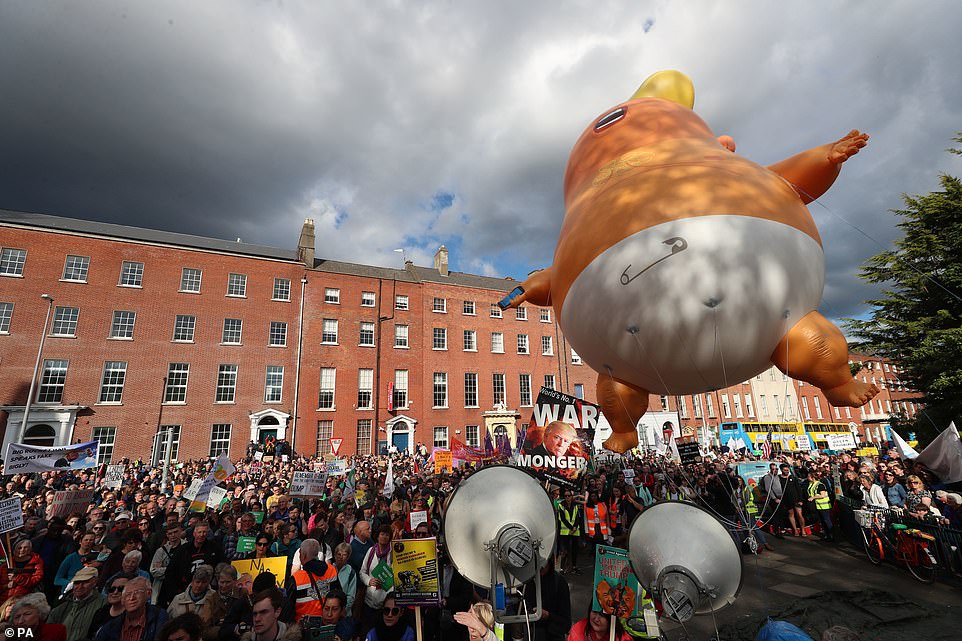 The hundreds-strong protest in Dublin was aimed to show Mr Trump was not welcome in Ireland during his visit, although he never visited the capital nor planned to 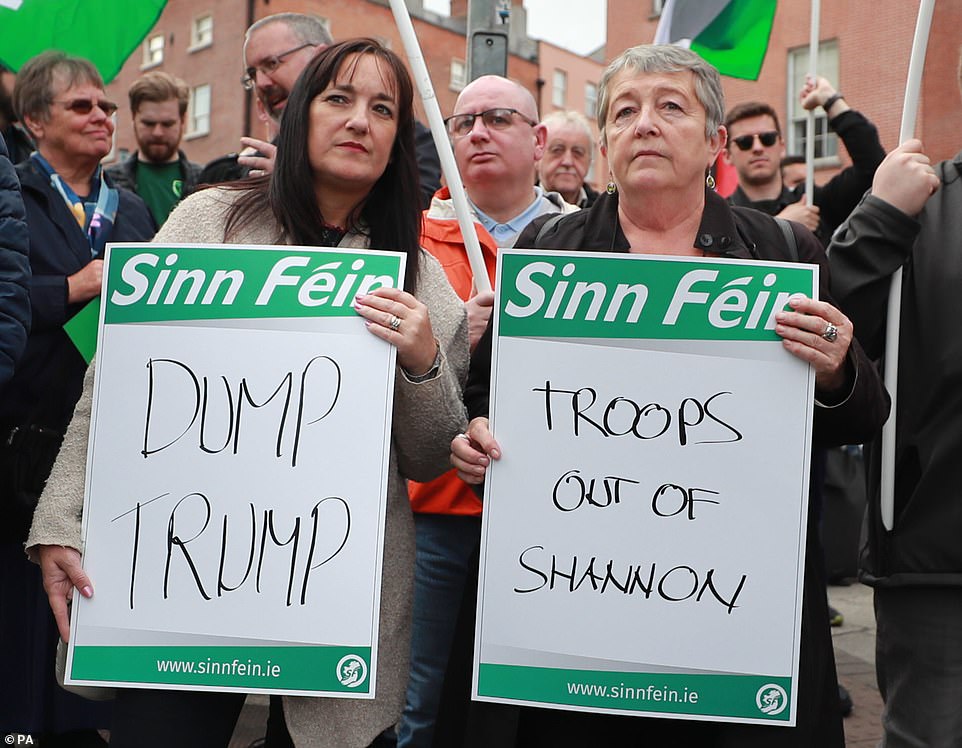 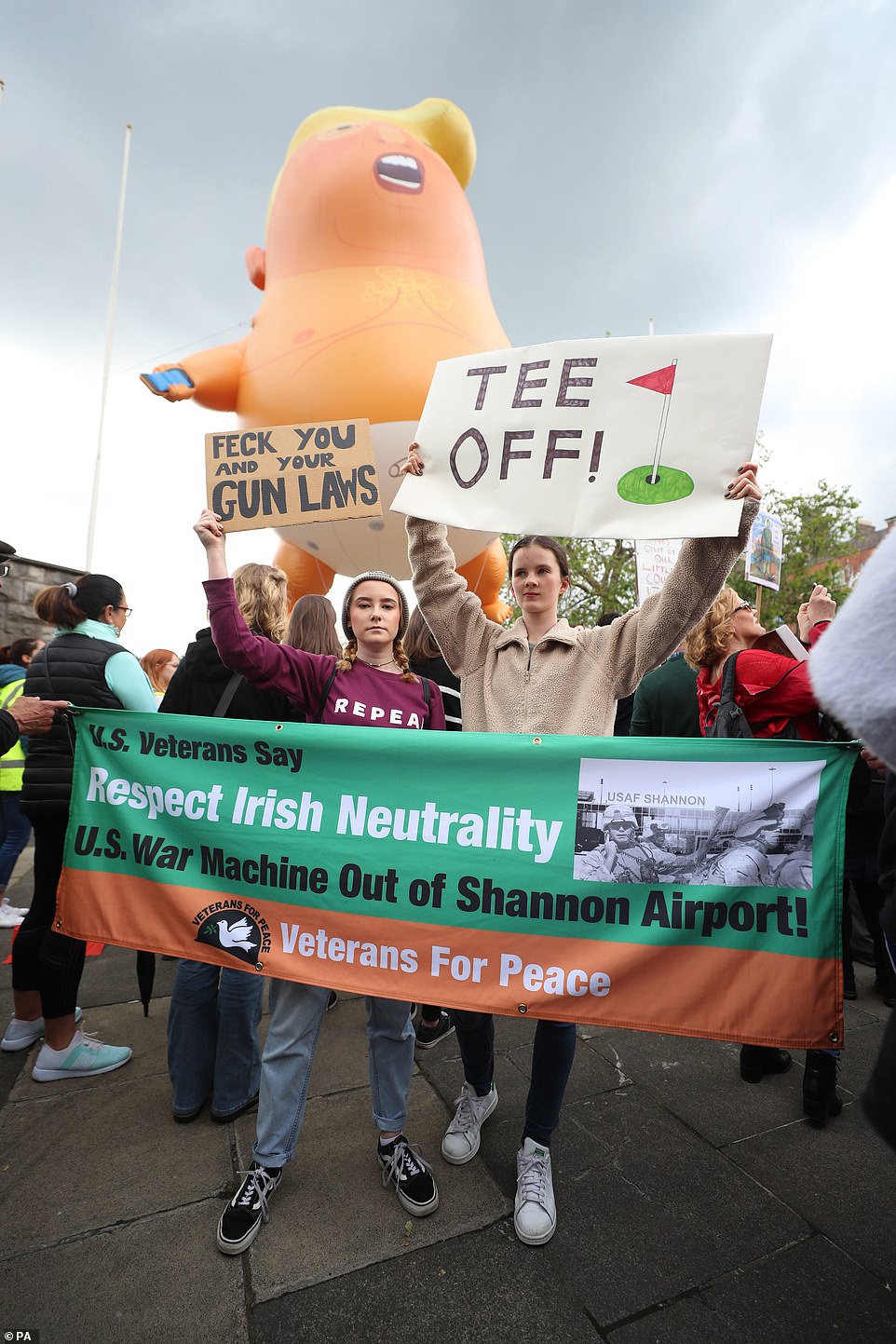 A protestor holds up a sign reading ‘Tee Off’ – a reference to the golf course Mr Trump owns on the island, where he is staying 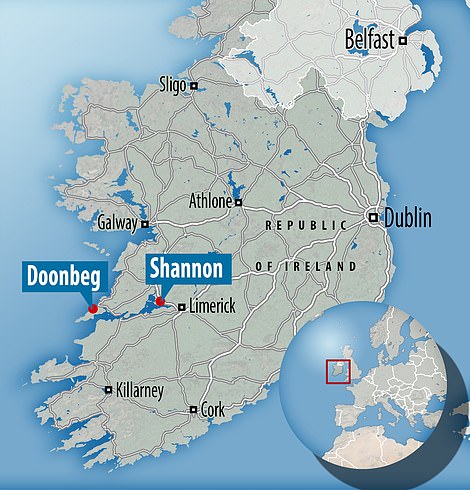 The rally in Dublin was 180 miles away from the President, who returned to his resort in Doonbeg via Shannon Airport

After the rally, several thousand protesters marched from Dublin’s Garden of Remembrance down O’Connell Street.

They chanted ‘Donald Trump go away’ and ‘Hear it loud and hear it clear, Donald Trump not welcome here’.

Earlier, one speaker told crowds that the turnout would make it impossible for the President, or the media, to claim he had been a welcome visitor to Ireland.

The anti-Trump rally kicked  off at the Garden of Remembrance at around 6pm on Thursday, organised by a number of campaign groups, organisations and political parties.

A number of other protests will also take place across the country to coincide with Mr Trump’s first official visit to Ireland since becoming president.

On Thursday morning Mr Trump travelled to France for a ceremony to mark the 75th anniversary of the D-Day landings.

Mr Trump tweeted: ‘Heading over to Normandy to celebrate some of the bravest that ever lived. We are eternally grateful.’ 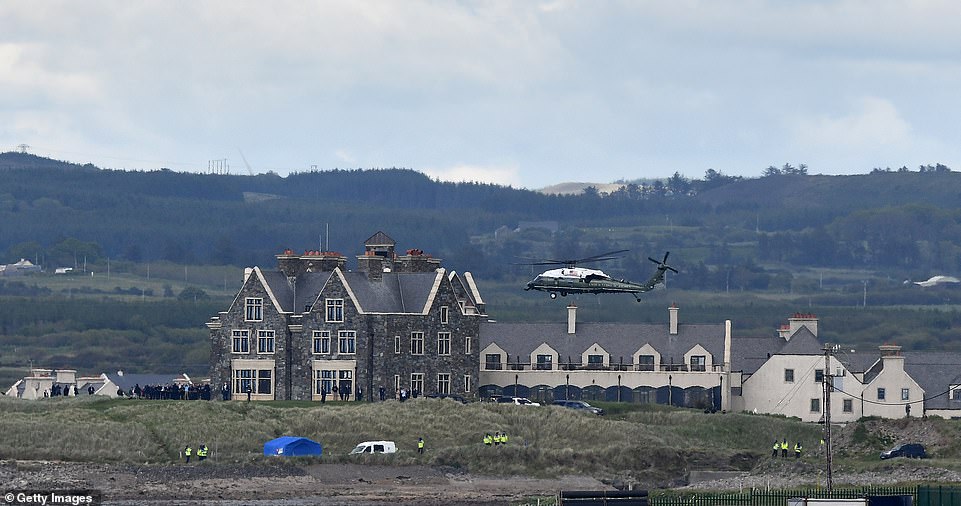 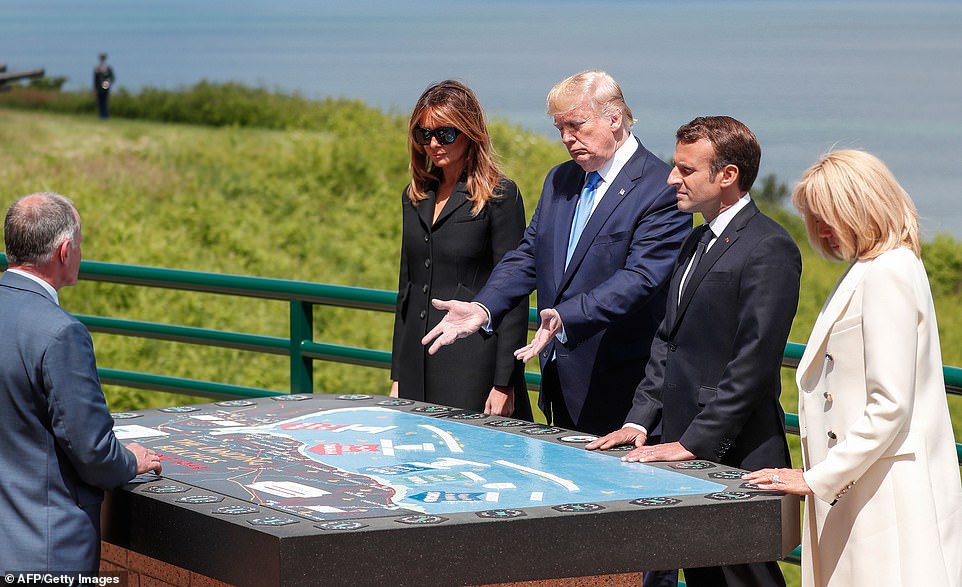 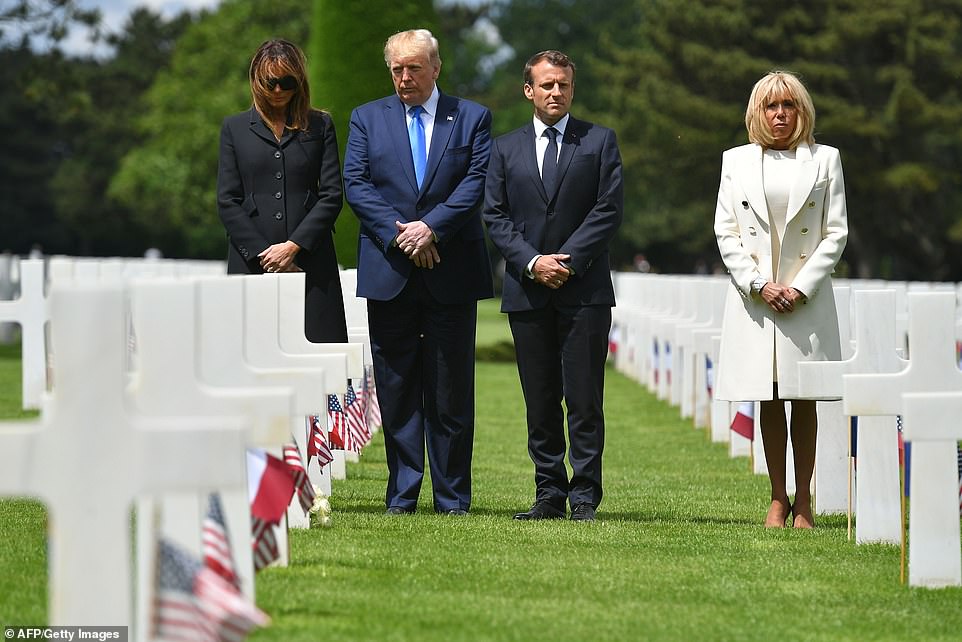 During a meeting with Irish premier Leo Varadkar on Wednesday, Mr Trump drew a parallel with his planned wall between the United States and Mexico as he expressed confidence that the Brexit logjam over the Irish border would work out ‘very well’.

At the start of a bilateral meeting with the Taoiseach at Shannon Airport, Mr Trump said Brexit could be ‘very, very good for Ireland’.

The president agreed that the current free-flowing Irish border should be preserved.

‘The way it works now is good and I think you want to try to keep it that way and I know that’s a big point of contention with respect to Brexit is your border,’ he said.

‘And I’m sure it’s going to work out well. I know they are focused very heavily on it.’

Mr Trump rejected the suggestion Brexit would be bad for Ireland.

‘There are a lot of good minds thinking about how to do it and it’s going to be just fine and I think ultimately it could even be very, very good for Ireland, but the border will work out.’

Speaking to reporters after his meeting with Mr Trump, Mr Varadkar said the president had told him he believed it was possible to keep the Irish border open.

‘We didn’t go into any particular detail as to how he thinks it can be done but he understands that that has to be a shared objective – that if the UK is going to leave with a deal, that deal must involve legally-operable guarantees that we won’t see the emergence of a hard border between north and south,’ he said. 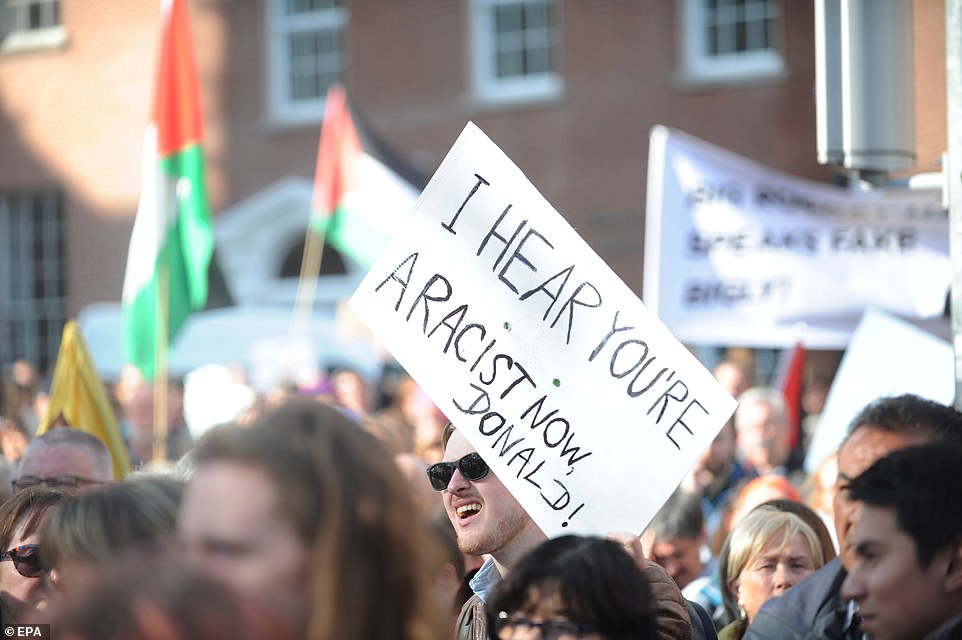 Several of the signs were inspired by channel 4 sitcom Father Ted, including this one which references the moment in the show when a member of the public, after a humorous misunderstanding, asked Ted: ‘I hear you’re a racist now, Father?’ 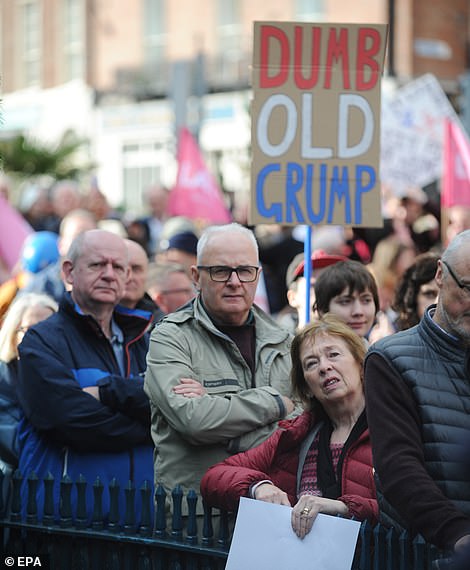 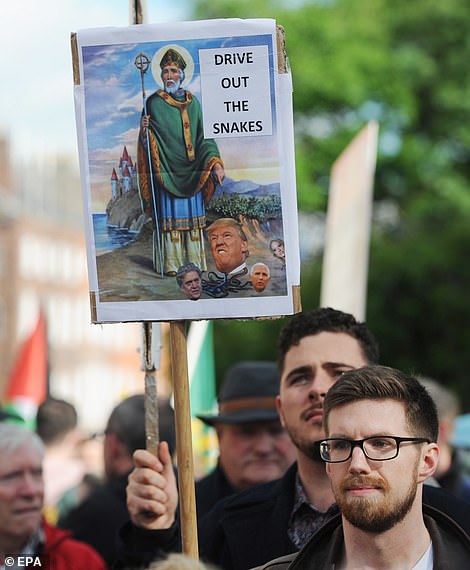 Mr Varadkar said Mr Trump ‘didn’t elaborate on why he thinks Brexit would be good for Ireland’.

Asked if was concerned that Mr Trump appeared to compare the Irish border with the US/Mexico border, the Taoiseach said: ‘We very much discussed the different nature of the border and I explained that 20 or 30 years ago we did have a hard border between north and south, particularly when the Troubles were happening and there were customs posts and so on, and that everyone in Ireland – north and south, unionist and nationalist – want to avoid a return to a hard border, but that Brexit is a threat in that regard and an unintended consequence that we can’t allow.’

Mr Trump and First Lady Melania Trump are staying at the president’s Doonbeg hotel and golf resort in Co Clare.

Two of his sons visited a number of pubs in the village hours after their arrival. Eric and Donald Junior arrived to cheers from locals as they swept up in Range Rovers.

They spoke to several villagers, posed for selfies with children and received even louder cheers after asking ‘does Doonbeg love Trump?’. They run the organisation which has created several hgundred jobs in the area since buying the resort in 2014.

The Trump family visit comes amid a massive security operation in west Co Clare. A ring of steel has been erected around the five-star Doonbeg resort. Around 3km of barriers and 3km of 6ft-high fencing have been put in place for the visit. And 1,500 gardai have been drafted in throughout the area for three days.