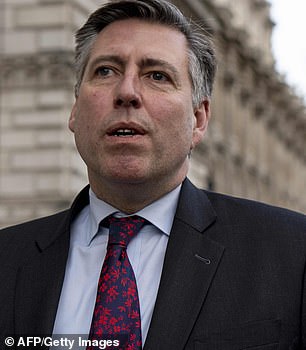 The most senior Tory backbencher has told Theresa May that MPs want her to stand down because of her handling of Brexit, it was reported last night.

Sir Graham Brady, chairman of the 1922 Committee of Tory MPs, is said to have visited the Prime Minister on Monday to tell her that a growing number believe she has to quit.

Sir Graham had been ‘bombarded with text messages’ by Conservative MPs and urged to confront the Prime Minister with demands that she should go, the Daily Telegraph said.

Sir Graham imparted their calls in a ‘neutral’ manner in his role as chairman of the 1922 Committee during the meeting in Downing Street, the paper reported.

Downing Street suffered yet another blow yesterday when Eurosceptic MPs who had backed Mrs May’s deal threatened to abandon it last night after she had left open the prospect of No Deal.

The Prime Minister came under pressure from ‘switchers’ who voted for her plan last week fearing if it fell there would be a lengthy delay to Brexit.

Now such a delay seems to be off the table, some Eurosceptics may seek to achieve No Deal.

The MPs had been convinced by Mrs May to back her proposals after she warned they faced a choice between that and a long extension to Article 50.

But in a reversal, she has ruled out asking for a long delay and – despite last night’s developments in Brussels – the door to leaving without a deal remains open.

Several of the MPs told Mrs May personally that she would need to promise to quit to have any hope of getting her deal through the Commons next week.

She was given the blunt advice at a ‘robust’ meeting with 20 Tories in her Commons study on Wednesday. One MP said: ‘The point was made by several people that if she wanted to get her deal through, she would have to say, “I’m leaving on such and such a date”.’

Another said: ‘There were some people reiterating the view that her still being there was a problem. It was clear it’s not something she’s contemplating. She took it on the chin but didn’t respond.’ 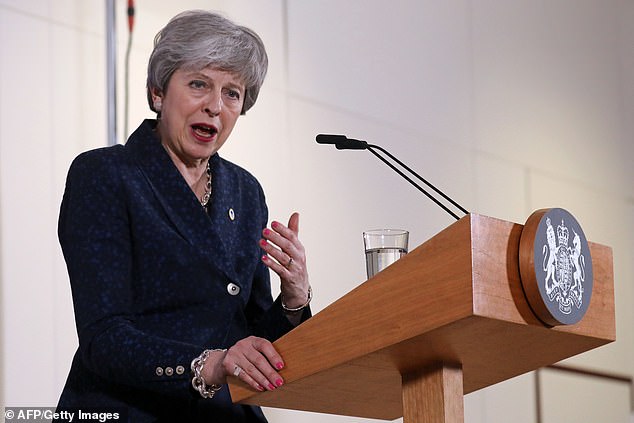 Amid a backlash against the PM’s address to the nation on Wednesday, one Cabinet minister refused to back her approach. While on a visit to Basildon, Home Secretary Sajid Javid was asked by the BBC if she was wise to blame MPs for the Brexit delay.

He said: ‘I have just come from Westminster to get away from Brexit, so I don’t think it’s appropriate to answer that question.’

Some previously supportive MPs went public to say they could now vote against the deal when it comes back to the Commons.

Mansfield Tory MP Ben Bradley said: ‘She has made it more difficult. In terms of getting enough support, that speech last night was not helpful.’

One MP said Mrs May’s No Deal reversal left them feeling they had the ‘rug pulled out from underneath them’.

Another said: ‘A week ago we were all told that No Deal was dead and she has brought it back to life.’

In another blow to Mrs May’s hopes of getting the deal through, a senior DUP figure described the Irish backstop as ‘toxic’.

The meeting with Eurosceptic MPs took place at 7pm on Wednesday. In what was described as a ‘no holds barred’ discussion, MPs sought reassurance that No 10 ‘knows what they are doing’, one attendee said.

Several MPs argued that it was harder for them to back Mrs May’s deal now because they had done so thinking Britain could leave on time on March 29.