The next Speaker of the House of Commons will be a male Labour MP after the fight to replace John Bercow went to the wire tonight.

Firm favourite Sir Lindsay Hoyle squared off against Chris Bryant in a fourth round of voting tonight after five other candidates were knocked out in the hotly contested battle for the key parliamentary role.

Sir Lindsay was way out in front after the first skirmishes in the House, with 211 votes in the first round. His closest rival was Tory Dame Eleanor Laing, who had 113.

But although he accrued votes in subsequent rounds it was Mr Bryant, 57, who received 98 in the first round, who came through to take it to a head-to-head.

They received 267 and 169 votes in the third round respectively, with Dame Eleanor bowing out on 127, leaving Sir Lindsay short of the 50 per cent of MPs needed to win outright.

He needs just 15 of Dame Eleanor’s backers to switch their allegiance to him to win.

Harriet Harman, who was fourth after the second round had earlier withdrawn.

It came after the candidates swiped at ‘grandstanding’ John Bercow as they made their pitches to MPs.

In a series of speeches ahead of the crunch votes, Sir Lindsay said the inhabitant of the chair should be ‘accountable’.

Meanwhile, Dame Eleanor took a potshot at Mr Bercow’s verbose style. ‘Can I just say that it’s not the role of the Speaker to say any more than needs to be said,’ she insisted.

Fellow Labour MP Chris Bryant said he wanted to ‘return to the rulebook’, in an apparent dig at the former Speaker’s creative interpretations of procedure in Brexit debates.

The House is electing a replacement for Mr Bercow, who departed last week after a controversial decade in the chair.

While Sir Lindsay looks to be the front runner, even his allies admit the outcome is incredibly difficult to predict, with multiple rounds of secret ballots.

One MP joked that around 1,100 pledges of support had been offered to candidates by the 650 members of the Commons. 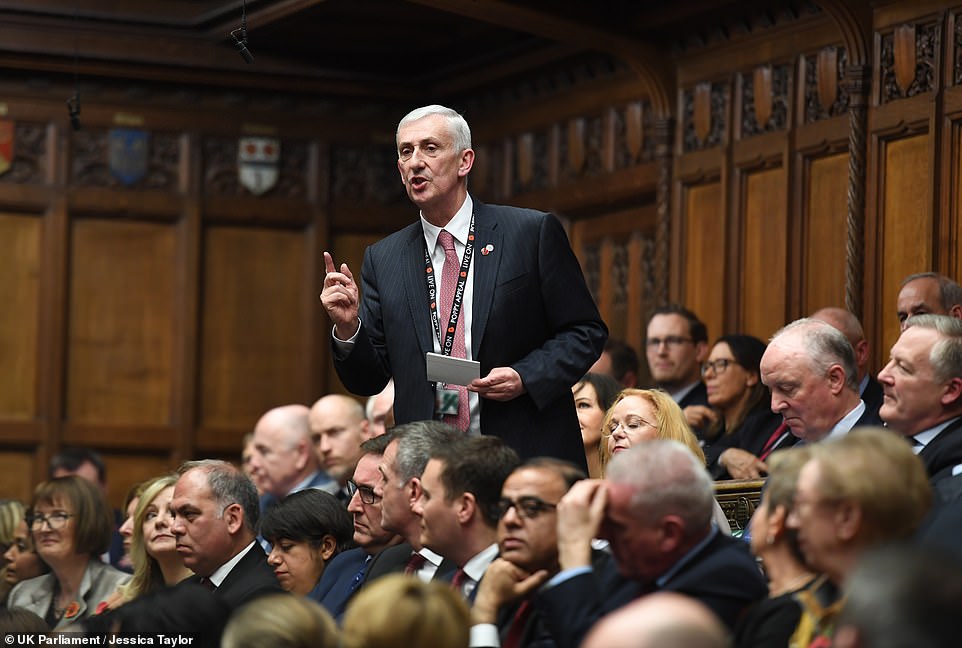 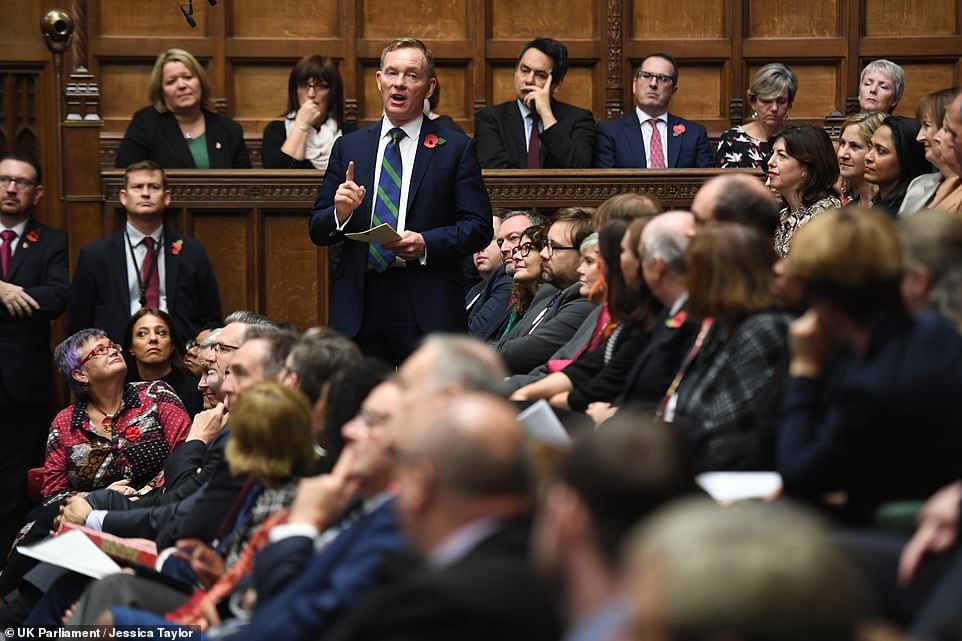 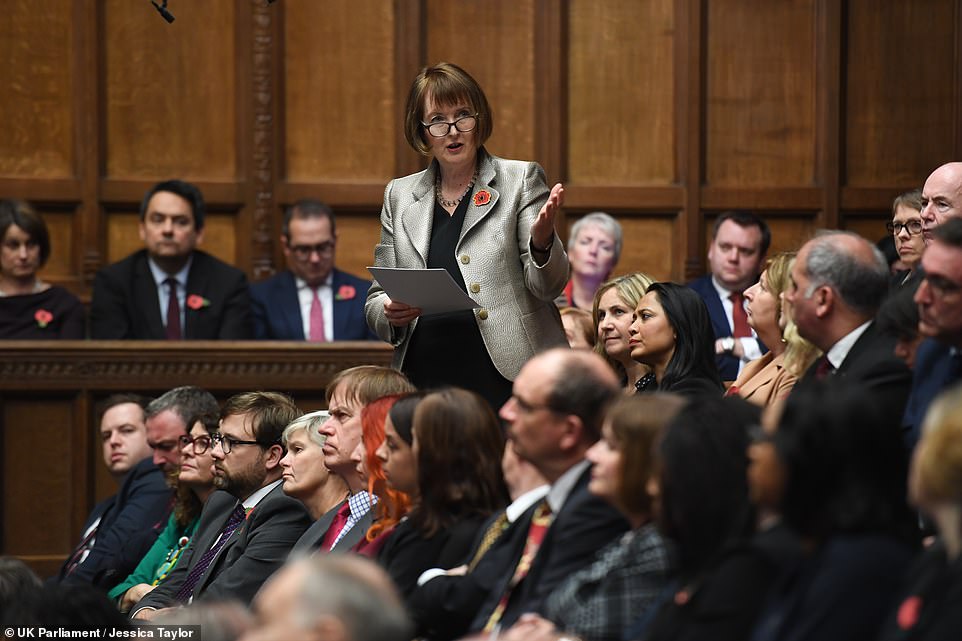 Veteran Labour MP Harriet Harman, the longest-serving female MP, is looking to become only the second woman Speaker in the post’s history 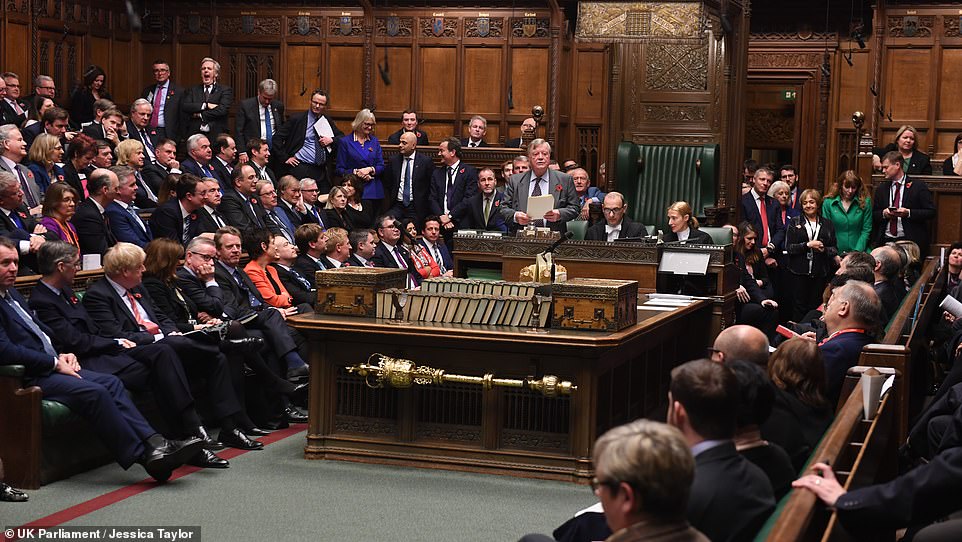 MPs are now voting on a replacement for Speaker John Bercow, who stepped down last week. Ken Clarke, the longest-serving MP, is officiating in the absence of a Speaker

Who are the MPs battling it out for the Speaker’s chair?

The Labour MP for Chorley, Sir Lindsay is the favourite, and considered a safe pair of hands after serving as John Bercow’s deputy for nearly a decade.

The 62-year-old has attracted significant support from across the House, including Tory Brexiteers. He is unlikely to have any truck with the constitutional ‘innovations’ of the Bercow era.

The 57-year-old has served on the ruling Commons Commission, and was deeply involved in the campaign for the multi-billion pound restoration and renewal of Parliament.

He has been backed by senior Tories including Michael Gove.

Ms Harman, the longest-serving woman MP in the House, is supported by many female politicians.

However, the 69-year-old’s background as a former deputy Labour leader and politically-correct reputation might inhibit her chances of the top job.

Few Tories are behind her – and if it looks like she is in with a shot, they could pile behind Sir Lindsay to ensure she is defeated.

Dame Eleanor, 61, was another of the deputy Speakers under Mr Bercow.

During the campaign, the Tory MP has been critical of his record, saying the House requires an independent referee.

However, it is unclear whether she will be able to command enough Labour support to take on the front runners.

First elected as the Labour MP for Doncaster Central in 1997, the parliamentary veteran served as the party’s chief whip from 2010 until 2016.

She was then elected as one of three deputy speakers in June 2017 and now wants the top job.

She has pledged to be a ‘stabilising, unifying Speaker’ after Mr Bercow’s lengthy tenure which she described as ‘not without controversy’. 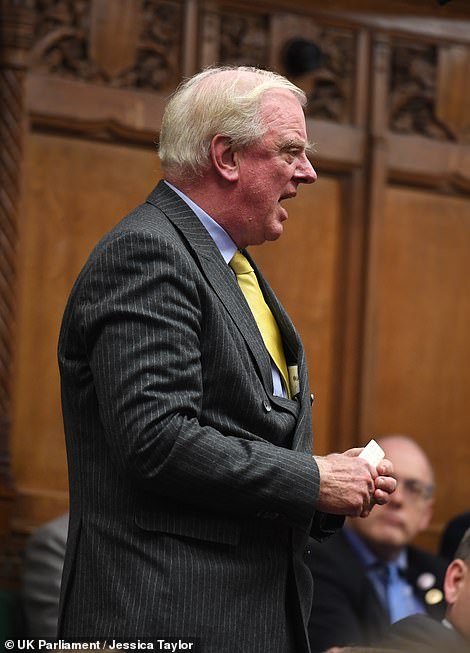 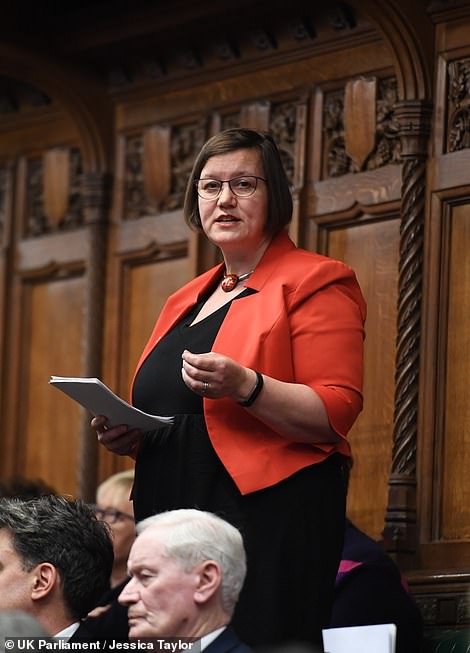 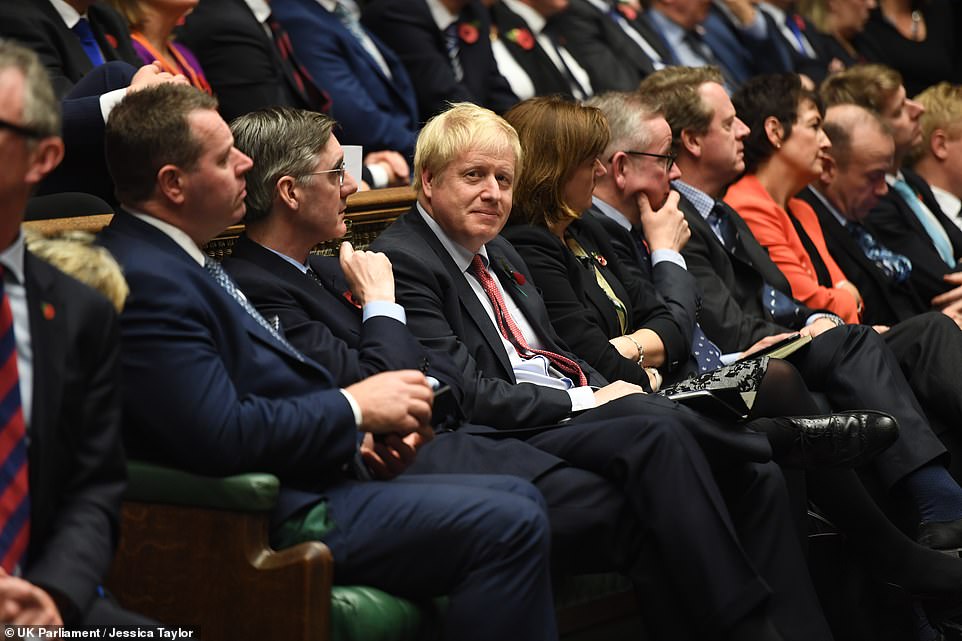 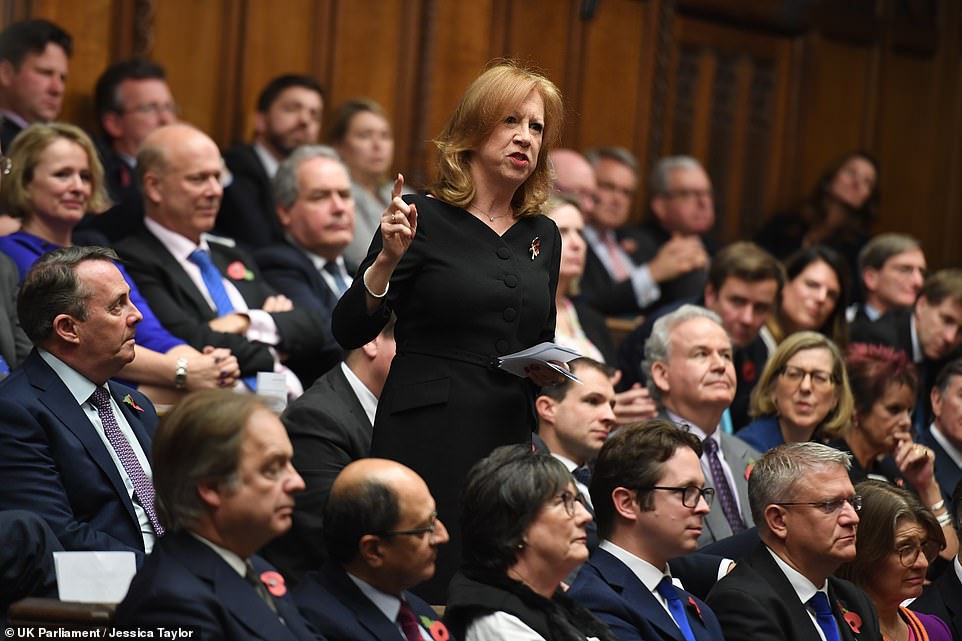 Dame Eleanor Laing, also a Deputy Speaker, was in second place after the first round of votes this afternoon

A secret ballot among MPs is taking place. MPs can only vote for one candidate and the result will be announced in the chamber.

Any candidate who receives more than 50 per cent of the votes will be proposed to the House as Speaker, although MPs will be asked to vote again if no candidate meets the threshold.

In the second round of voting, candidates who either came last or received fewer than 5 per cent of the votes will not be on the ballot paper.

Speaker hopeful woos MPs with promise of a Commons cat

House of Commons will get a cat to tackle the problem of mice, one of the candidates standing today in the election to replace John Bercow as speaker has pledged.

Labour MP Chris Bryant said he would bring in the feline as the infestation of the rodents has got worse despite a £111,000-a-year pest control bill.

Mr Bryant is considering naming the cat after a previous speaker, such as Onslow, Addington or Fitzroy.

It has also been suggested he get two cats called Erskine and May – after the bible of parliamentary procedure Erskine May.

Battersea Dogs and Cats home has previously offered to supply a cat to Parliament, but the idea was rejected by officials on health and safety grounds.

MPs, peers and staff complain that mice are regularly seen in Parliament’s canteens and even run across desks. The problem has been fuelled by a huge programme of building and restoration work.

In a report published earlier this year, senior officials blamed the ‘proximity of the Houses of Parliament to the River Thames, as well as to Westminster Tube Station’ for making the buildings ‘particularly vulnerable to pests, especially to mice’.

There is also a 10-minute period after each round for candidates to withdraw.

Ballots will continue until either one MP wins more than 50 per cent of the votes or only one remains.

A motion is then put to the Commons proposing the winner as Speaker and they will take the chair if this is agreed. If not, a vote takes place.

Speeches of congratulation are expected to follow the votes.

In his speech, Sir Lindsay said: ‘It’s about having an accountable Speaker to back that up. It isn’t just about the backbenches, it’s about a Speaker that endorses and supports the backbenches – and that’s what I hope I’ve always shown during my nine years as deputy.’

Sir Lindsay also said the Commons is ‘not a club’ where length of service takes priority, adding: ‘The person who walked through that door yesterday is just as important to their constituents – their voice must be heard as well – and the pecking order ought not to be there, it is about equality.’

He pledged to push on with security reforms to keep MPs, their families, staff and the Commons safe.

He went on: ‘This chamber I believe is under-used and we ought to seriously look at how much more we can get out of this chamber.’

Making his pitch, Mr Bryant said: ‘I’m standing because I love Parliament, I believe in parliamentary democracy and I want to do things properly – that means being a Speaker who has absolutely no favourites, a Speaker who believes in standing by the rules, somebody who is completely impartial, who knows Erskine May inside out, back to front, I’ve got it lying by my bedside.’

Mr Bryant added: ‘A Speaker who is an umpire not a player.’

The MP said he wants Prime Minister’s Questions to return to 30 minutes – rather than the hour it had hit under Mr Bercow – call MPs relevant to a debate rather than because of some idea of seniority, and to stop clapping in the chamber.

‘This the 21st century for goodness sake, we need to escape from the overbearing and hierarchal structures that have made it all too easy for a culture of bullying to take route.’

In another barb at Mr Bercow she said: ‘Can I just say that it’s not the role of the Speaker to say any more than needs to be said.’

The 56-year-old entered Parliament in 1997 and held several shadow ministerial positions before taking the Speaker’s chair on June 22 2009, promising to serve ‘no more than nine years in total’.

He abandoned that commitment ahead of the 2017 snap election, but allegations of bullying by former members of his staff, denied by the Speaker, led to fresh calls for him to quit.

He caused fury by twisting rules in the chamber to help Remainer MPs take on the government’s Brexit policy.

Mr Bercow formalised his departure from the Commons today by becoming ‘Steward and Bailiff of the Manor of Northstead’.

That is the traditional way of standing down as an MP, as they are not allowed to resign from office directly. 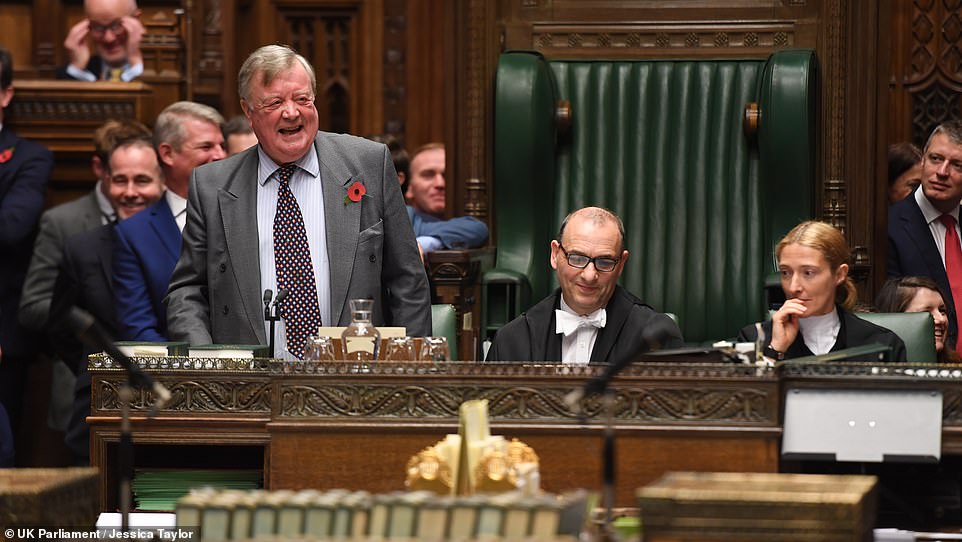 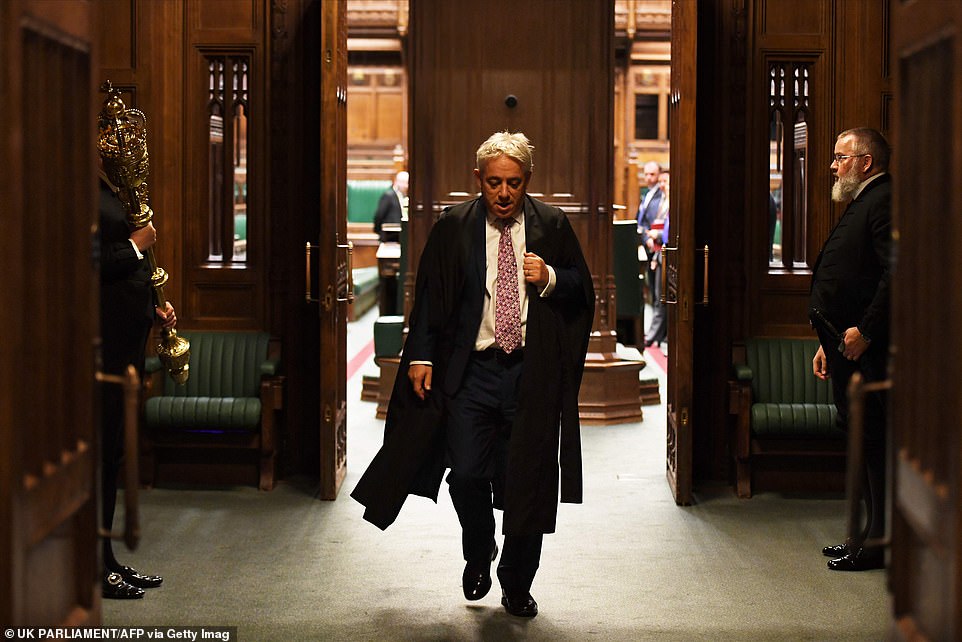