Ben Shephard has revealed he had a ‘surreal’ experience presenting Good Morning Britain while taking strong painkillers to ease a back injury.

The presenter, 43, suffered a slipped disc in February, earlier this year, but continued to film for the ITV breakfast show, despite taking tramadol to help with the pain.

In a candid interview with The Mirror, Ben confessed that the medication left him ‘in a daze’, causing him to speak without realising he was doing so live on air. 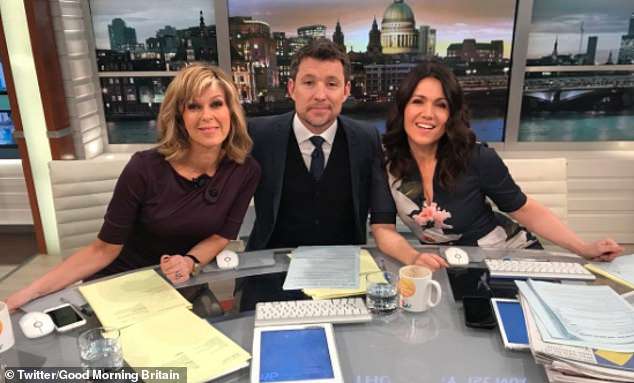 ‘In a daze’: Ben Shephard has confessed presenting Good Morning Britain while taking strong painkillers for a back injury had been a ‘surreal’ experience

Ben recalled a moment where he had unknowingly spoken ‘out loud’ on the show, prompting his co-host Kate Garraway to step in and tell him to be quiet.

He told the paper: ‘What was interesting was doing the show after I did my back and I did a couple of shows on some very heavy painkillers.

‘Those were shows that were quite surreal – you can imagine, it was a bit of a daze.

‘Kate Garraway had to to turn round and tell me to be quiet. She said, “Shush,’ and I said, “Did I say that out loud?”‘ 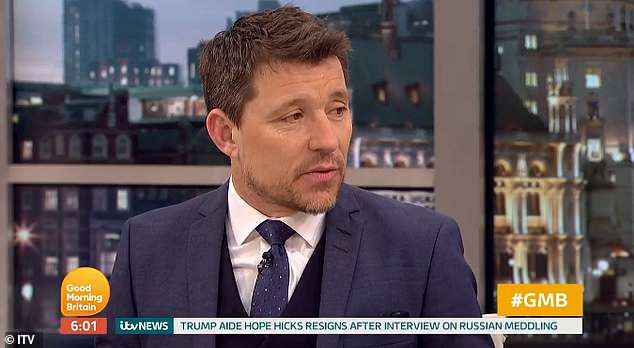 Hazy: The presenter, 43, suffered a slipped disc in February earlier this year, but continued with his working commitments while taking tramadol to ease the pain 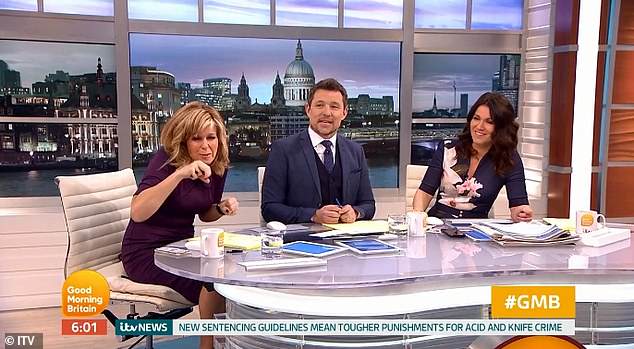 Not with it: The medication however led to Ben speaking without realising it live on air, prompting his co-stars to step in and steer the show back on track

Ben explained he had been taking tramadol for his back injury, as it helped to ‘numb the pain brilliantly’.

After his experience working while using the medication, however, he decided to deal with his injury in a ‘conscious way’ and stopped taking the painkillers.

He had suffered a slipped disc after saying goodbye to a friend following an outing to the pub. Ben described his injury as a ‘middle-aged injury’ and insisted he was shocked to have damaged his back by hugging his pal.

‘He went one way, I went the other way and that was it – it went!’ he recalled.

Ben has since had two operations. He was quick to address his injury on Twitter before an airing of Good Morning Britain at the end of February, where he praised his co-stars Kate Garraway and Susanna Reid for ‘holding him up’. 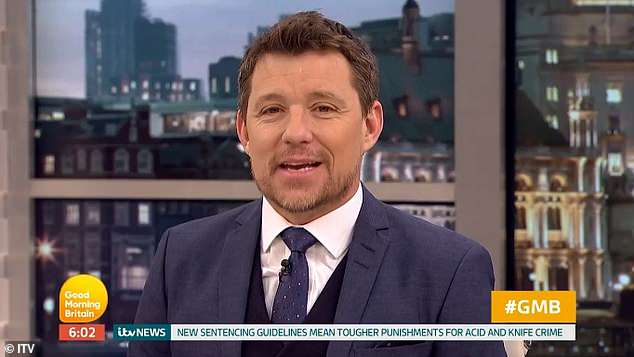 Oops: Recalling the experience, Ben told The Mirror: ‘Those were shows that were quite surreal – you can imagine, it was a bit of a daze. ‘Kate Garraway had to to turn round and tell me to be quiet. She said, “Shush,’ and I said, “Did I say that out loud?”‘ 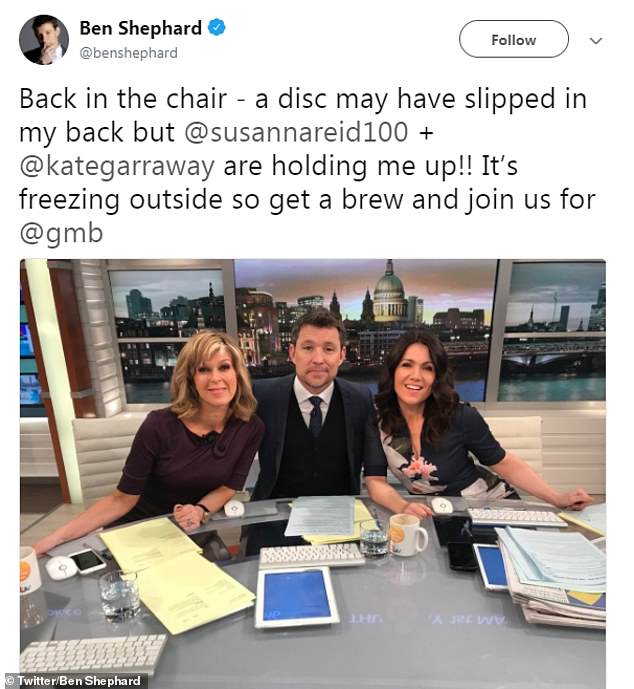 Injured: Ben took to Twitter to address his injury prior to GMB airing and claimed his co-stars were ‘holding him up’

Sharing a photo of himself sitting at the GMB panel with his fellow presenters, Ben tweeted: ‘Back in the chair – a disc may have slipped in my back but @susannareid100 + @kategarraway are holding me up!! It’s freezing outside so get a brew and join us for @gmb.’

Ben told viewers at home that was in ‘agony’ and joked he was getting ‘no sympathy’ from Kate and Susanna.

The TV star is no stranger to injury and has previously dislocated his elbow and ruptured the ligaments in his ankle. In October last year, Ben appeared on GMB while wearing a medical boot on his foot.

He explained that he had torn his ligaments while trying to impress his children and falling from a wall. 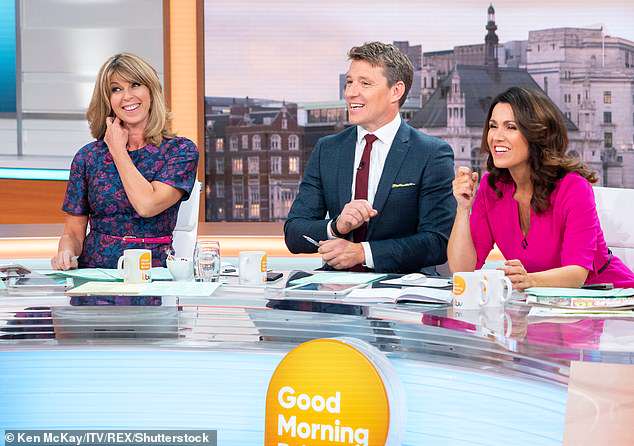 Injury-prone: The GMB star is no stranger to injury and has previously dislocated his elbow and ruptured ligaments in his ankle 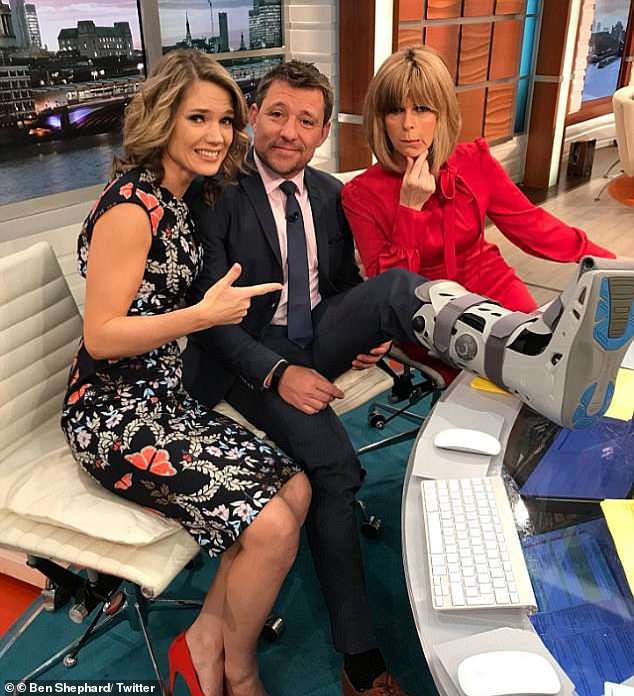 Ouch: In October last year, Ben appeared on Good Morning Britain sporting a medical boot after tearing ligaments in his ankle while falling off a wall

He said at the time: ‘I did it last week but I didn’t make a fuss, I ruptured a few ligaments in my ankle… I fell off a wall. I was messing around with the kids, trying to be too ninja and failing again. And it’s been quite bad.’

His co-host Kate responded by branding him an ‘idiot’, with Ben joking: ‘That’s what my wife says and my kids now too.’

Ben is known for his sporting prowess, taking part in Soccer Aid and competing in triathlons, and he left his Ninja Warrior co-hosts Rochelle Humes and Chris Kamara impressed after completing the challenging obstacle course.

Two years prior to his ankle injury, Ben had filmed himself successfully completing the course in a segment for Good Morning Britain and following his triumph, he  couldn’t resist ribbing his co-star Kamara, as he said: ‘I’m so chuffed you were here to witness that!’ 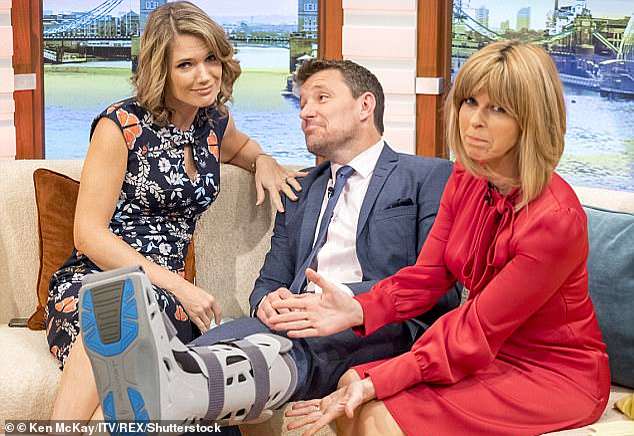 ‘I was trying to be too ninja’: Ben revealed he had been messing around with his children when he hurt his ankle, leading Kate Garraway to brand him an ‘idiot’ 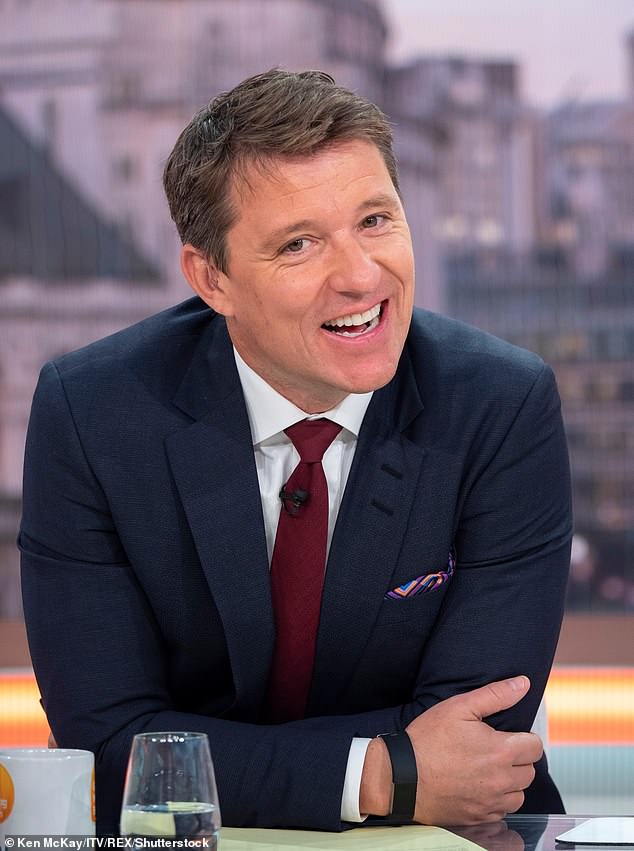 Sporty: The star is known for his sporting prowess having competed in Soccer Aid and triathlons, as well as completing the Ninja Warrior obstacle course