While Media Watch champions itself as a fair and balanced industry watchdog, these public tweets reveal a culture of professional snobbery and a complete lack of impartiality – in clear breach of the national broadcaster’s charter.

Under the ABC act, Media Watch is supposed to gather and present news and information that is ‘accurate and impartial according to the recognised standards of objective journalism’.

But you need to go no further than the tweets of the Media Watch ‘story editor’ Jason Whittaker to see that those who work on the show do not consider it necessary to be impartial or abide by the show’s own guidelines. 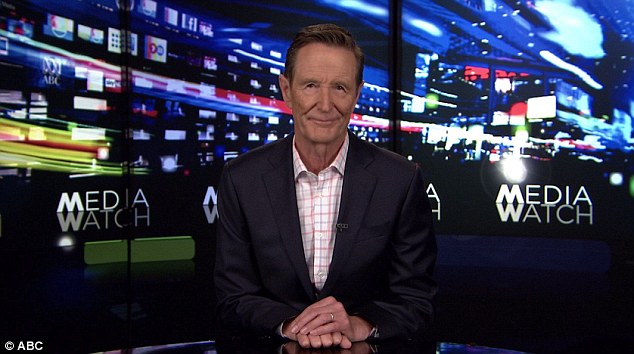 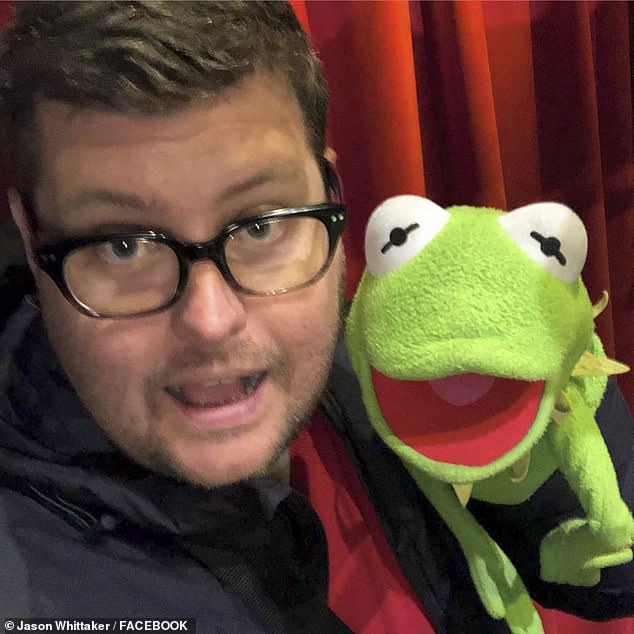 Muppet: Media Watch ‘story editor’ Jason Whittaker has done nothing much with his career other than navel gaze and sneer about media and journalism from the safely protected world of political website Crikey and the ABC

In a string of offensive tweets by Mr Whittaker, he describes the Mail as the ‘festering boil on the arse of Australian media’, a ‘skidmark’ on the industry and repeatedly refers to its talented, hardworking journalists as ‘sewer rats’.

This comes from a man who has done little with his career other than navel gaze and sneer about media and journalism from the safely protected world of the political website Crikey and the ABC.

Are these the sorts of juvenile attacks we should expect from a taxpayer-funded program that claims to be an independent watchdog of Australian media?

What they do confirm is a culture of bias against digital media and particularly Daily Mail Australia, led by the program’s wilting host Paul Barry, who is openly disdainful of the Mail and regularly labels it a ‘disgrace’.

From you, Mr Barry, we take that as a compliment.

Barry, who is paid more than $200,000 a year for his 15-minute-a-week show and lives in a palatial eastern suburbs home, loves to take the high moral ground but is blind to the incredible failings of his own operation.

In an extraordinary move, the program took to Twitter last Wednesday to publicly tout for complaints against Daily Mail Australia ahead of a planned hatchet job on the publication on Monday night – effectively outsourcing the job for which the show is handsomely paid by every taxpayer in this country to do.

In a pinned tweet, Media Watch asked journalists to provide examples of stories that had been followed up or rewritten by the Mail – a standard industry practice that has been operating for as long as media has existed. 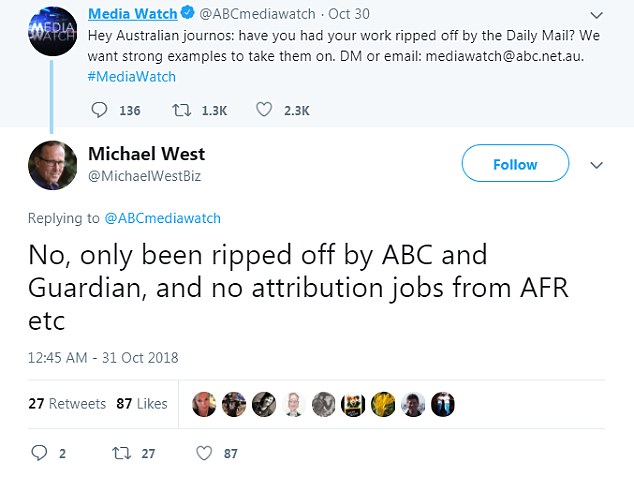 The so-called watchdog boldly declared it was planning to ‘take them (Daily Mail Australia) on’.

Seriously? Is this what Mr Barry and his so-called independent team consider ‘impartial, accurate and objective’?

All it does is point to a program that has lost its way, with a snobby, outdated view of what constitutes ‘news’ and a growing reputation for chasing a pre-determined outcome.

Media Watch has been also contacting former Mail journalists by text message and email inviting them to describe how our newsroom operates. 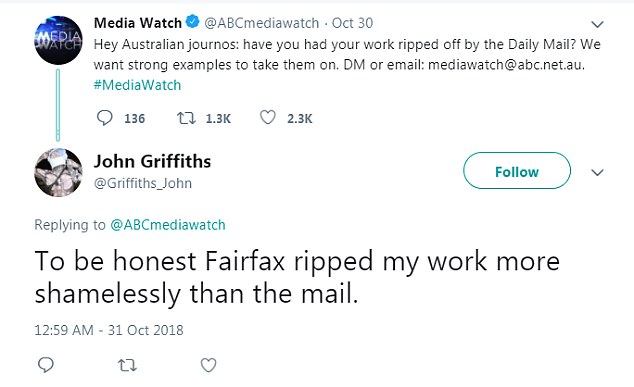 ‘I was absolutely furious to be contacted by a Media Watch staffer to “dish dirt” on Daily Mail Australia,’ they said.

‘In my newsroom now, they watch Daily Mail Australia like hawks, and are always running over to say “the Daily Mail has this or that story, we need it now”.’

At Daily Mail Australia we are not ashamed of the way we operate.

Do we break exclusive stories? Yes, every day.

Do we hire young journalists, give them the best training in the industry and send them on placements to cover stories around the world? Yes.

And like any other media organisation, do we follow up stories and chase our own angles to cater for our massively growing readership? Of course we do. 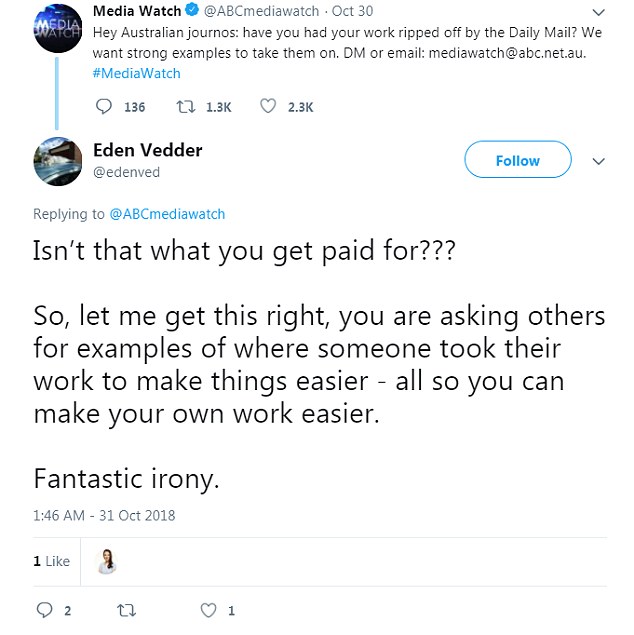 So it stings of hypocrisy when the ABC singles out us for supposedly stealing content when we are no different to the rest of the Australian media market.

Even the  lazy callout for dirt on Daily Mail Australia resulted in some unexpected feedback for Barry and his team, with Walkley-winning journalist Michael West quick to point out he had only ever had his work taken by the ABC, the Guardian and the Australian Financial Review – without any attribution at all.

Similiarly, John Griffiths responded: ‘To be honest Fairfax ripped my work more shamelessly than the Mail’.

Others were quick to highlight that News Corp also follows up stories that other websites have published, including Daily Mail Australia.

One response, in particular, drew attention to the rank hypocrisy of Media Watch.

‘So let me get this right, you are asking others for examples of where someone took their work to make it easier – all so you can make your work easier. Fantastic irony’, wrote Eden Vedder.

Daily Mail Australia has no problem with other journalists following up its stories. And we are not here to call out the practices of other hard-working journalists or the organisations they represent.

The world has changed but Media Watch has failed to move with the times, and it shows.

Why would I do an interview with Paul Barry when he and the Media Watch team have shown a blatant and clear bias against Daily Mail Australia?

Under the ABC’s charter, Media Watch is supposed to gather and present news information that is “accurate and impartial according to the recognised standards of objective journalism.”

How can this be the case when a senior member of Mr Barry’s team, Jason Whittaker, has publicly tweeted that DMA is “the festering boil on the arse of Australian media”, a “skidmark on Australian media” and called our talented staff “sewer rats”?

Do you consider this lack of impartiality and taxpayer-funded abuse acceptable?

Mr Barry has also repeatedly called us a “disgrace” because of his own snobby idea of what constitutes “news” and the fact he clearly doesn’t understand the growing influence of digital media.

Media Watch’s extraordinary tweet this week vowing to “take them on” and the public touting for complaints against this publication at the exclusion of all others was unprofessional and further confirms your bias and the pre-determined outcome for the show.

Daily Mail Australia has made a substantial investment in Australia with more than 90 journalists and arguably the best trainee scheme in the country. We are continuing to expand while others slash their newsrooms and we don’t hesitate in sending our reporters across Australia or internationally to chase stories.

The fact is we run exclusive stories every day.

Original Daily Mail Australia content is regularly rewritten by our competitors (often without attribution) – and the fact you are not bothering to also “take them on” reaffirms you are planning a hatchet job on us.

As a rule, we credit the original source and provide a link, which is best industry practice.

It is also worth noting that Australian newspapers have been “ripping-off” Daily Mail content from the UK for years.

PETER OBORNE: Say what you will about the Prime Minister, but there’s no questioning her tenacity
Childish Gambino's This Is America triumphs with three Grammy wins
Wife of Topshop owner Sir Philip Green 'splashed out £190,000 for ultra-rare bottle of red wine'
Jade Goody shocked doctors when she carried her son to her hospital bed in her final hours
Countries pledge billions to fight tuberculosis worldwide
Britons flout lockdown rules by camping out at UK's seaside resorts
Yes, that £6 plonk can be a corker! That's the average price we now spend on a bottle
'I want to break the internet': What Meghan Markle 'told PR firm'