Shocking footage has captured a biker jumping a red light on a dual carriageway – with a young child perched in front of him.

The clip, filmed on St George’s Bridge in Doncaster, South Yorkshire, shows that the child was wearing a pink helmet with the man in a grey tracksuit driving.

As they came towards red traffic lights on a roundabout, the pair zoomed through as the man appeared to gesture towards someone filming him.

The video was captured on Friday afternoon and later posted to Facebook by someone recording the incident from another vehicle.

The post was captioned: ‘Only in Donny. On St George bridge #shareforsafety.’

In the footage, the small bike is heard and then seen driving along the bridge, which has a 50mph limit.

Voices in the background can be heard saying: ‘Look at this mad b****** with a baby on. Got kid on there.’ 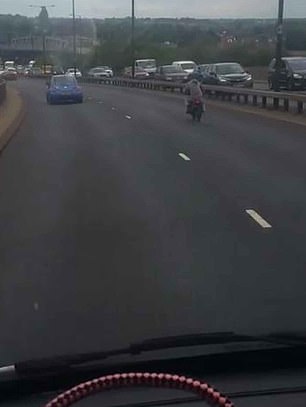 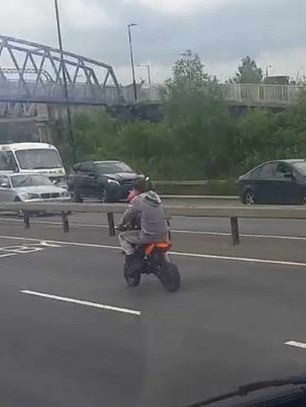 As the van approached alongside the motorbike, both the child and the man turned towards the camera with the man appearing to raise his hand. 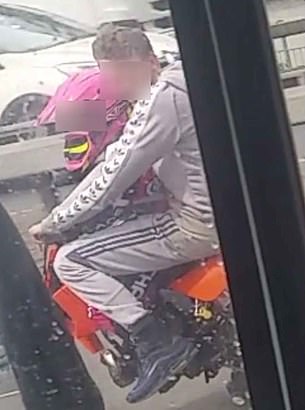 They then whizzed round St Mary’s roundabout, going through several sets of red lights in the process.

Someone can be heard to shout ‘Numpty’ in the background of the clip.

The footage has racked up more than 274,000 views with many commenting their anger at the man’s behaviour.

Eric Ward commented: ‘Should take kid off him and lock him up.’

Francis Oconnor said: ‘That’s acceptable on a field not over a dual carriageway bridge. Fool, I feel sorry for the kid have a d*** of a dad like that.’

Summer Gregg commented: ‘Even went through a red light cos he knew he was being filmed, he clearly is what we call a w*****.’

Chrissi Zoe said: ‘This is shocking, he needs reporting. Mum should of rang Police for putting her child in danger, absolutely disgusting [going through a] red light [with a] child on bike, wtf is wrong with people? 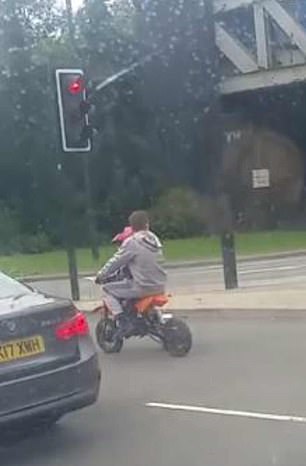 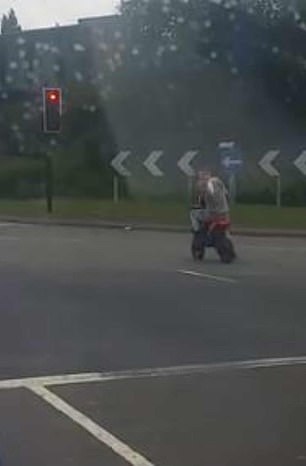 When the man them came up to a red light he quickly ran straight through it, before glancing back to throw a hand gesture at the person he had seen recording him

Speaking today, the man who filmed the clip, said: ‘I wanted to raise awareness about it. I was gobsmacked, I wouldn’t behave like that with a child on track road, never mind a busy road.

‘I have a child the same age and wouldn’t dare thinking of doing that.’