Blackburn has overtaken Leicester with the highest coronavirus infection rate in England, new figures have shown.

The borough of Blackburn with Darwen in Lancashire has a rate of 79.2 Covid-19 cases per 100,000 in the seven days to July 17, according to the latest data from Public Health England (PHE).

Leicester is itself currently in lockdown. 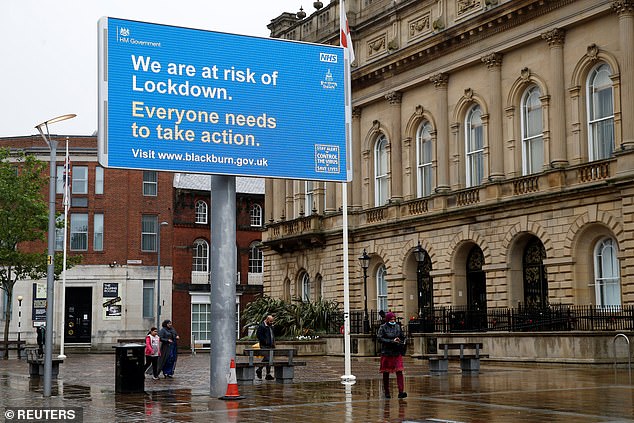 The borough of Blackburn with Darwen in Lancashire has a rate of 79.2 Covid-19 cases per 100,000 in the seven days to July 17, according to the latest data from Public Health England (PHE). Pictured: a warning sign in Blackburn town centre

Professor Dominic Harrison, Blackburn with Darwen Council’s director of public health, warned last week the area had two weeks to get the numbers down before lockdown measures are reversed.

The Lancashire town brought in extra restrictions last Tuesday and said the borough of 148,000 people was facing a ‘rising tide’ of cases.

He said data showed household ‘clusters’ of infections, suggesting one person was infecting others in the same household and this was mainly affecting the south Asian population. 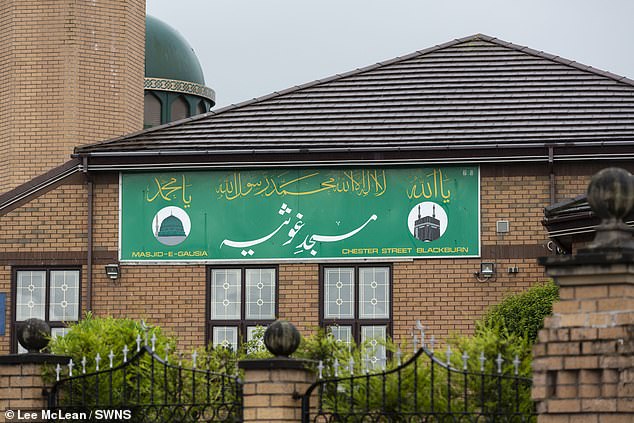 Muslim leaders have urged those who attended the Jamia Ghosia mosque on July 13 in Blackburn, Lancs, to self isolate or undergo coronavirus tests.

Blackburn with Darwen borough has an Asian population of about 28%.

Local Asian councillors told the PA news agency their community should not be stigmatised and said large families, sometimes looking after elderly relatives, living in small terraced houses was the reason for the elevated infection rates.

The local council introduced new measures warning the public to reduce household visiting to one household plus two members from another household, to wear face masks in all public spaces and asked people not to hug or shake hands on greeting.

Infection rates are expected to rise as more testing is done, before they fall back again.

Prof Harrison ruled out a Leicester-type total lockdown, but said if the figures for Blackburn do not turn around by July 27, then they will go through the lockdown lifting measures, reversing them one by one.

It comes as up to 250 mourners at a mosque in Blackburn have been forced to self-isolate after the imam tested positive for Covid-19.

Since July 4, a maximum of 30 people have been allowed at funerals, but an email seen by the BBC and sent to worshippers at Jamia Ghosia shows that hundreds attended the funeral prayer last week.

Muslim leaders have now closed the mosque for a deep clean and urged those who attended on July 13 to self isolate or undergo coronavirus tests. 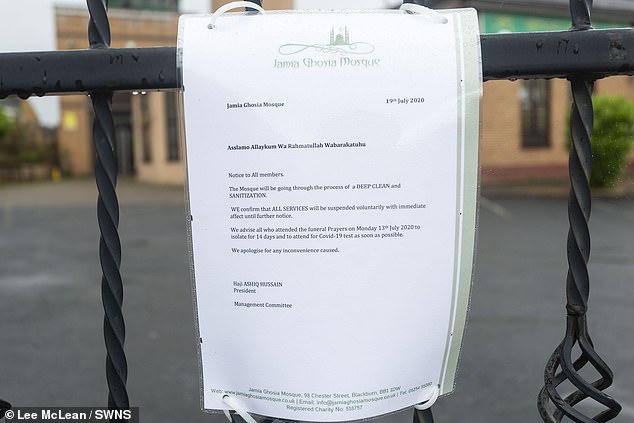 A sign at the Jamia Ghosia mosque, in Blackburn Lancs, shows it is currently closed for a deep clean

The email sent to worshippers said: ‘Furthermore the mosque is under investigation by the police and public health for exceeding the number of people allowed to participate in a funeral, which is 30, and for failing to comply with the law.

‘There is a possibility that other attendees may also have been infected at the Janazza prayers.’

The imam is understood to have tested positive for the virus and is currently recovering.

The news has sparked anger among locals who called the mosque’s actions in allowing so many mourners to attend funeral prayers as ‘selfish’ and ‘disgusting’.

On Sunday an announcement made by the mosque said the building would be closed until further notice while a deep clean takes place.

An email sent by the mosque urged those who attended the funeral to self-isolate for at least a week.

The message read: ‘Unfortunately our Imam who led the Janazah (funeral) prayer has been tested positive for COVID-19 and is recovering from the virus.

‘There is a possibility that other attendees may also have been infected at the Janazah prayers.

‘It is our legal obligation to strongly advise you to isolate yourself for seven days, or attend your local COVID-19 testing station for COVID-test. 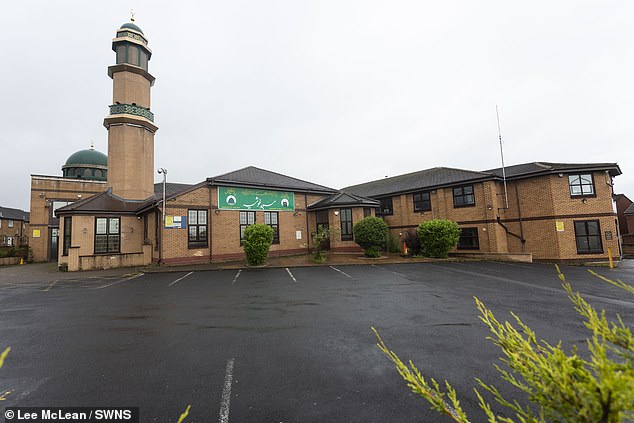 Locals have reacted with anger

‘Any future Janazah prayer will consist of 30 people only and all COVID-19 Janazah will NOT be allowed in the Mosque as we experienced this week, this must take place in the Blackburn Cemetery.’

The news was met with backlash from locals who are now fearing an impending local lockdown.

Posting on Facebook, Jo Pointon said: ‘This has really angered me. 250 people.

‘I attended my sisters funeral last week where only 12 people were allowed inside the church leaving several standing outside social distancing which was very upsetting.

‘Selfish and ignorant. My big question is how was this allowed?’

Dave Edmondson added: ‘How has a funeral with 250 attendees been allowed to happen.

‘No wonder there are hotspots and why we’re now still suffering with conditions imposed.

‘I’m hoping a hefty fine will be issued for this.’

In a post dated sometime in June, the mosque told worshippers that using the masjid as normal can ‘amount to a death sentence’.

The post, titled ‘URGENT REQUEST: Coronavirus and the Masjid’ said: ‘During this troubling time, using the masjid as normal can amount to a death sentence for someone you associate with.

‘While the government is anxious to give the appearance that everything is returning to pre-Covid-19 normality, the reality is that the virus is as widespread as when the Lockdown should have started.’

Public Health Blackburn has been contacted for a comment.