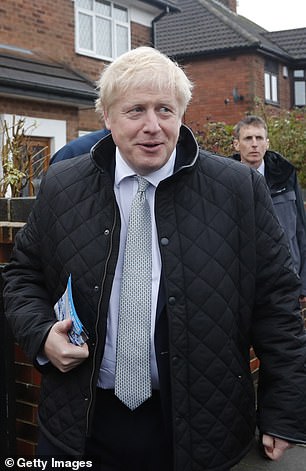 Boris Johnson has said that all Tory parliamentary candidates have vowed to vote for his Brexit deal if he wins a majority at the General Election.

In an interview with the Sunday Telegraph, the Prime Minister said this pledge means that voters can be ‘100%’ certain that a Conservative government will ‘unblock’ Parliament and deliver Brexit.

Last month, Mr Johnson’s Withdrawal Agreement Bill was approved in principle at its first hurdle when MPs voted 329 to 299 for it, but the blow came when they rejected the hasty timetable by 322 to 308.

It effectively put paid to his promise – ‘no ifs, no buts’ – to take the UK out of the EU by October 31.

Mr Johnson told the newspaper: ‘All 635 Conservative candidates standing at this election – every single one of them – has pledged to me that if elected they will vote in Parliament to pass my Brexit deal so we can end the uncertainty and finally leave the EU.

‘I am offering a pact with the people: if you vote Conservative you can be 100% sure a majority Conservative government will unblock Parliament and get Brexit done.’ 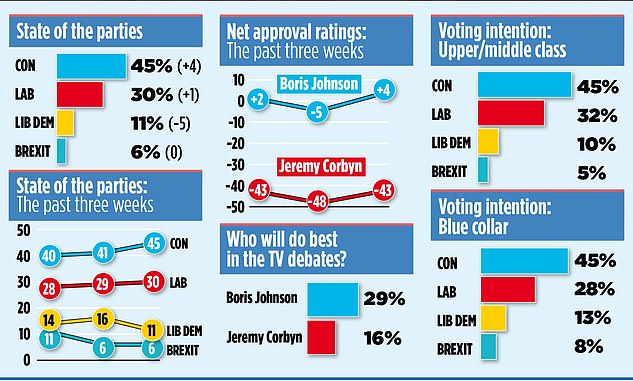 Tory strategists will be encouraged by the slump in Liberal Democrat support – down five to 11 per cent. Pictured: The survey’s results 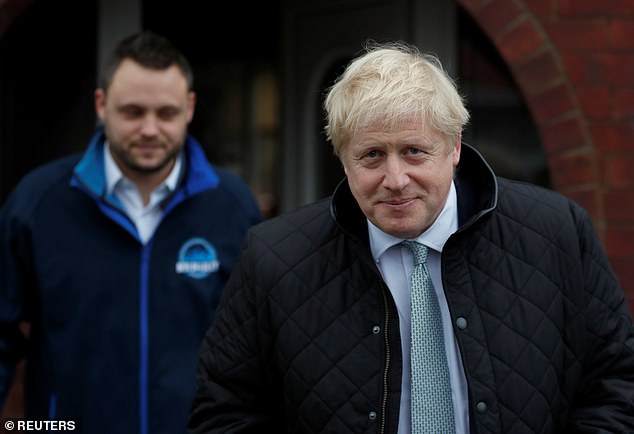 It effectively put paid to his promise – ‘no ifs, no buts’ – to take the UK out of the EU by October 31

Meanwhile, the newspaper also reports the Prime Minister has confirmed that he is postponing a plan to increase the threshold at which people start to pay the 40p tax rate.

‘We do want to reduce the burden of taxation,’ he said. ‘That’s very much our ambition, but we won’t do that until we have done more to lift the burden particularly on people on low incomes.

‘So the particular measure that you describe is something that remains an ambition, but we won’t do it until we have done more for people on low incomes.’

By Glen Owen Political Editor for the Mail on Sunday

Boris Johnson has extended his lead over Jeremy Corbyn as he strengthens the Tories’ grip on working-class voters.

This week’s Deltapoll survey for The Mail on Sunday gives the Conservatives a 15-point lead, up from 12 points last week, with the governing party on 45 per cent and Labour on 30.

Tory strategists will be encouraged by the slump in Liberal Democrat support – down five to 11 per cent – given the attempts by its leader Jo Swinson to form a pro-Remain tactical voting pact against the Conservatives.

Mr Johnson will need to pick up a string of Labour-held seats in northern working-class areas if he is to return to Downing Street with a healthy majority. The poll suggests that his clear pro-Brexit policy – unlike Mr Corbyn’s contortions on the issue – are winning him support in Leave-backing areas. 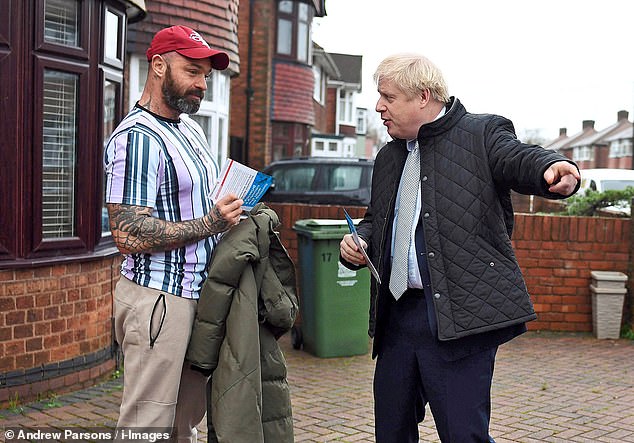 This week’s Deltapoll survey for The Mail on Sunday gives the Conservatives a 15-point lead, up from 12 points last week. Picture: Mr Johnson today while campaigning in Mansfield

While the Conservatives hold a 13-point lead in the highest ABC1 social brackets, that stretches to 17 points among C2DE blue- collar workers.

The complexity of the planned voting patterns in this Election leaves pollsters wary about making seat projections, but a uniform national swing in line with these figures could give Mr Johnson a majority of 108.

A largely gaffe-free week on the campaign train for the Prime Minister has helped his net approval score move back into positive territory, at plus 4 – a thumping 47 points higher than Mr Corbyn.

If the Labour leader puts in an unexpectedly strong performance during the televised Election debates – starting with his head- to-head showdown with Mr Johnson on ITV on Tuesday night – it could give him a boost.

However, most voters do not expect this: 29 per cent think Mr Johnson will do best, compared with 16 per cent who have confidence in Mr Corbyn.

The figures are effectively reversed when applied to a new Labour government, with 40 per cent predicting a rise and 15 per cent a fall.

The revolt by Nigel Farage’s Brexit Party candidates – many of whom pulled out of contests rather than risk splitting the Tory vote in key marginals – has left his party marooned on six per cent. 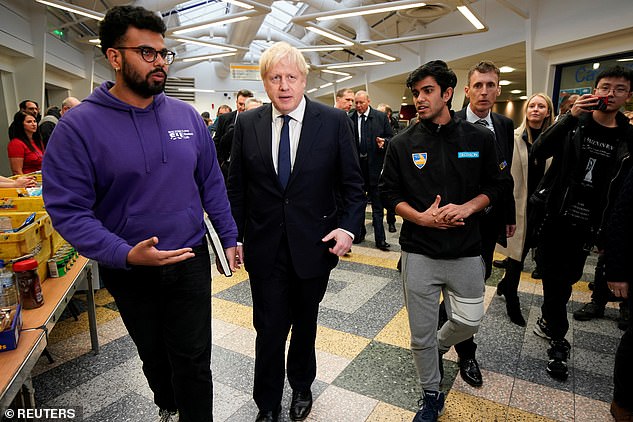 A largely gaffe-free week on the campaign train for the Prime Minister has helped his net approval score move back into positive territory. Pictured: Mr Johnson speaks to staff and students in the University of Bolton today

The poll suggests most voters think Mr Farage’s political career is nearing its end: a total of 45 per cent say his most successful days are behind him, and just 11 per cent think they lie ahead of him.

The Tories have been the main beneficiary of the fall in the Lib Dem vote. The same pattern was observed in 2017 when the Tories and Labour gained as the weeks went on and voters moved towards the two main parties.

As the Conservative and Labour parties increasingly dominate the vote share, could we be headed for a repeat of 2017? 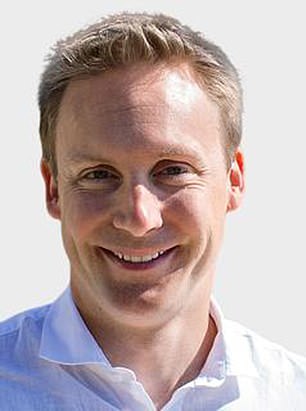 When looking at the polls, it is always important to remember that they are subject to a margin of error, writes JOE TWYMAN (pictured)

The latest results from Deltapoll for The Mail on Sunday show the Conservatives and Labour continuing to strengthen their positions. As these two parties increasingly dominate the vote share, could we be headed for a repeat of 2017?

When looking at the polls, it is always important to remember that they are subject to a margin of error. This is linked to the mathematical laws of probability and, while its impact can be reduced to some extent, it cannot be removed entirely. It is a good idea, therefore, to look at the long-term trends that emerge from a series of polls over time to get an understanding of the stories that are emerging.

Since the General Election was first called at the end of October, one key story to emerge has been the steady rise in support for the Conservatives. At the same time, Labour’s share of the vote has also increased, albeit by a smaller amount, and with the party still some way behind in second place.

This growth in support for the two largest parties is reminiscent of the 2017 Election when Labour and Conservatives won more than 82 per cent of the vote between them. In doing so they bucked a trend that had seen their combined share decline in most General Elections since the 1950s.

The extent to which 2017 can be repeated depends, at least in part, on the performance of other parties during the campaign. The Brexit Party has seen its share consistently decline, while the Liberal Democrats have seen more fluctuation, with a drop in Deltapoll’s most recent survey. While the Lib Dems are still performing better than they did at the last Election, they are, along with the Brexit Party, a long way down from the levels of support they enjoyed at the European parliamentary elections earlier this year. 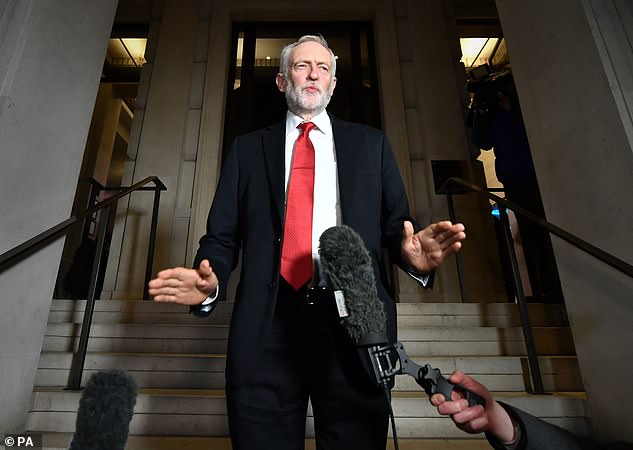 This growth in support for the two largest parties is reminiscent of the 2017 Election when Labour and Conservatives won more than 82 per cent of the vote between them. Pictured: Labour Party leader Jeremy Corbyn speaking in London today

European elections are, of course, very different from General Elections, and never was that more the case than back in May. Both the Brexit Party and the Lib Dems made hay while the sun shone on what was perceived to be the closest this country will probably ever come to a ‘consequence-free’ national election. In contrast, Labour, and particularly the Conservatives, really suffered.

Unlike the European elections, the consequences of the General Election are clear and present to many. Now that attention has moved away, at least somewhat, from Brexit and towards other issues, it is the Conservatives and Labour – realistically the only two parties likely to lead the new government – who are benefiting.

The other parties should not feel too despondent quite yet, however. There is still nearly a month to go and things could change dramatically. Plus, it is how all the parties perform in each of the 650 individual constituencies that really matters.

Polls inevitably move up and down during a campaign and the long-term trends could still move back in their favour. The story of the 2019 General Election is not yet written.

Passengers protest train ticket price hikes of up to £150 a year
New dad Prince Harry is all smiles as he takes part in a charity polo match in Rome
Number of 'boomerang children' who still live with their parents has soared by a million
Virginia governor under fire for endorsing post-birth abortion
UK population will soar by 3million over next decade to 69.4million
Father-to-be, 25, survived a week in the wild by eating berries and crickets
Hundreds of UK students have joined thousands across the globe in climate change protest
Passenger, 23, survives being impaled on a wooden post that pierced his chest