Boris Johnson faces between one and two months watching his government from the wings even if he makes a full recovery, scientists warned ahead of the coronavirus-stricken premier’s third night in hospital.

Experts said a ‘period of inactivity’ in intensive care would result in the Prime Minister suffering a significant loss of muscle mass and strength.

Survivors who have been discharged from critical treatment also braced Mr Johnson for weeks of bed-rest to recuperate from the physically draining disease.

Such an extensive period out of action would see Foreign Secretary Dominic Raab steer the country through the critical phase of the UK’s epidemic, as cases peak.

Mr Raab, who is deputising for Mr Johnson in his senior role as first secretary of state, confirmed a further 854 people have lost their lives, taking the death toll to 6,227, while cases rose by 3,634 to 55,242.

He has been handed extensive decision-making powers, including ones relating to national security, while the PM remains in St Thomas’ hospital in central London.

Downing Street reassured the 55-year-old’s condition was stable and he ‘remains in good spirits’, while not currently in need of ventilation.

And Mr Raab said he was confident his ‘boss and friend’ would pull through, branding him a ‘fighter’ who was in ‘safe hands’.

As the PM spent a second night in intensive care: 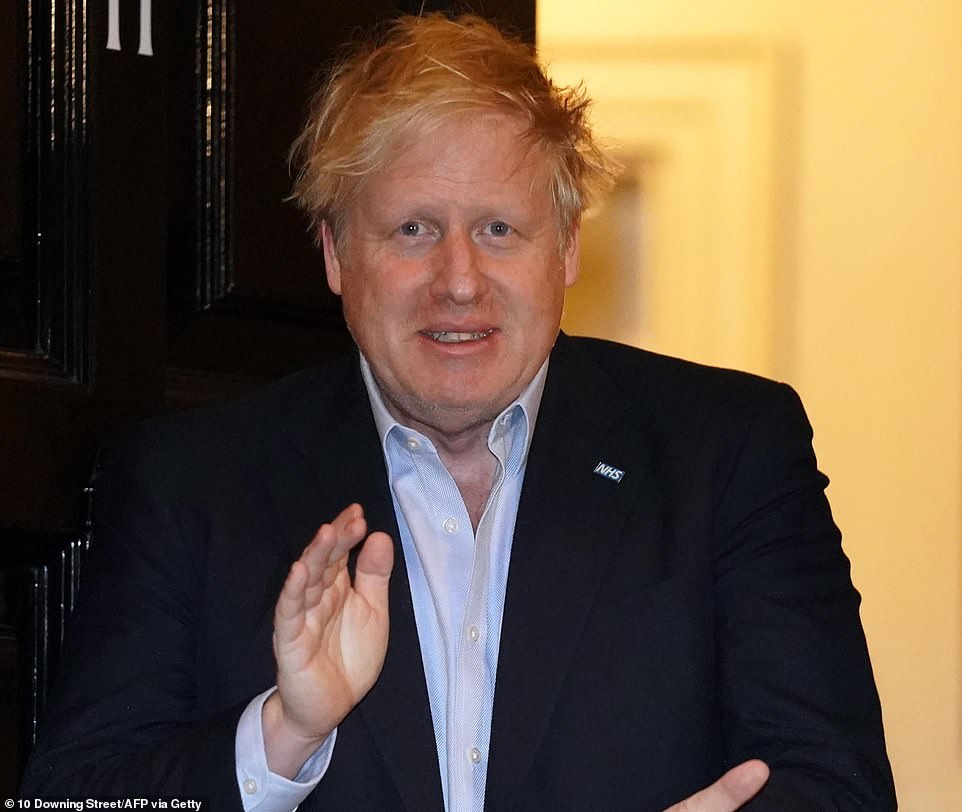 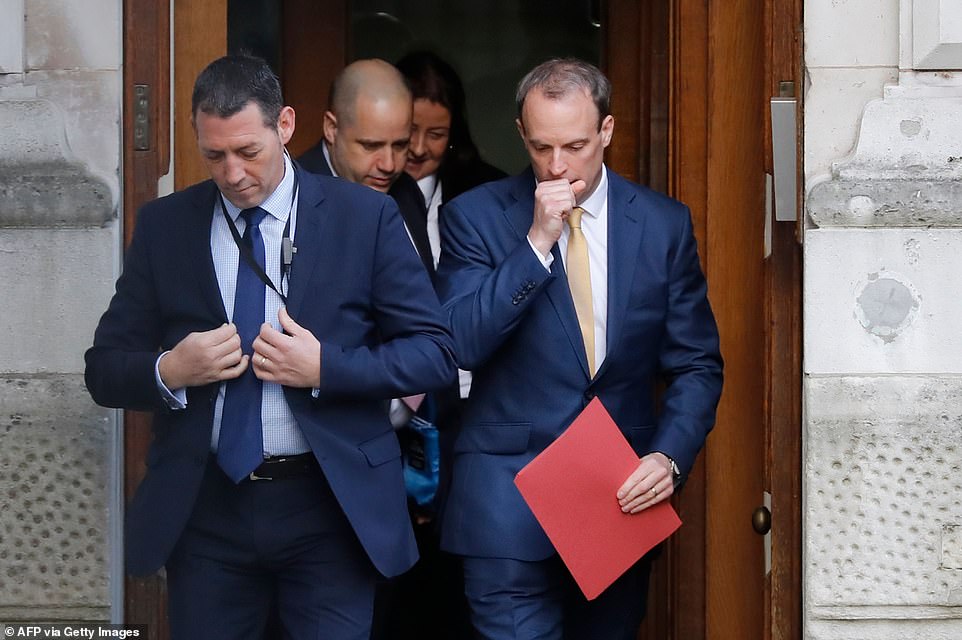 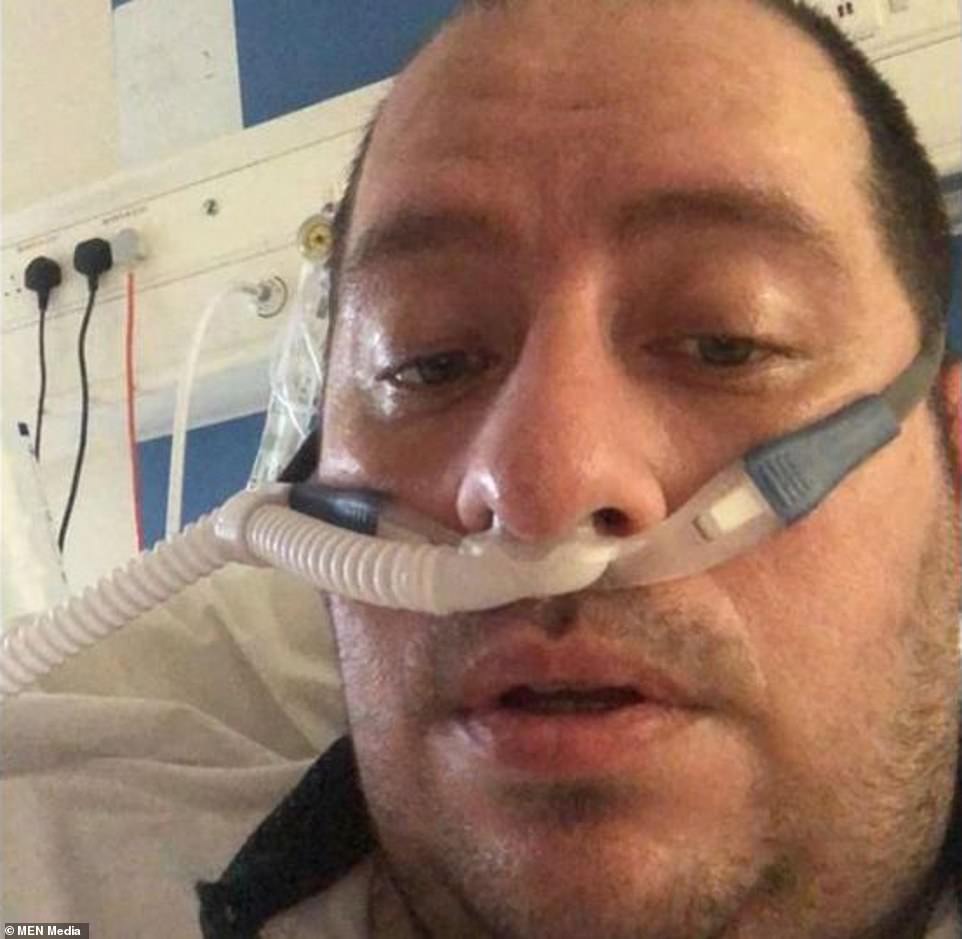 Matt Dockray, 39, who was treated in intensive care for the disease, mapped out recovery path awaiting Mr Johnson on his discharge from hospital

Professor Paul Hunter, an expert in infectious diseases at the University of East Anglia said: ‘If you have been sick enough to go on intensive care and you survive – and only about half of patients survive – clearly you will need some time to recover.

‘I would expect most people who were that ill, to need at least a month or possibly two to be sufficiently back and to be able to function.’

Professor Mike Grocott a consultant in critical care medicine at the University Hospital Southampton NHS Foundation Trust and vice president of the Royal College of Anaesthetists said: ‘On average a person who spends a while in intensive care on oxygen therapy alone, but basically immobile, would have a decrease in physical function for a period of time, that was likely to extend into weeks.

‘A period of inactivity will have an effect on physical function, typically characterised by a loss in muscle mass and strength.

‘It depends on how bad the duration and magnitude of illness was and it also depends on the quality and amount of time invested in rehabilitation.

‘We underestimate the value of just getting up and walking around and activity in normal life.’

Matt Dockray, 39, who was treated in intensive care for the disease, mapped out recovery path awaiting Mr Johnson on his discharge from hospital.

The father-of-one from Marlow, Buckinghamshire, told Good Morning Britain: ‘There’s still a long road of recovery, it takes about six to eight weeks, but you can sit here and tell the tale and fight this.’

Describing his own personal battle with the virus, Mr Dockray said: ‘There was a point where you sort of started to lose hope and thought that was it, because you’ve seen this on the TV, you’ve seen the pictures of Italy.

‘In my head that was the time to say ‘You’ve just got to fight as much as you can’.’

Across the Atlantic, Mic Reich, 36, from Chicago, revealed how she still had not regained her stamina after symptoms surfaced in early March.

The patient, who does have an autoimmune disease, told the Chicago Tribune: ‘The best way I can describe it is it’s like wearing a corset that’s too tight, while walking through the polar vortex.’

And survivors have also told of emotional bruising which takes a while to fade, with fears of infecting loved ones.

Scientists have not yet established how long it takes for patients to fully recover from Covid-19.

Some have seen symptoms linger for as much as eight weeks, according to reports.

But Prof Duncan Young, Professor of Intensive Care Medicine, University of Oxford, said that the recovery period of intensive care patients generally can be much longer than a month.

He said: ‘In the UK the average hospital ward stay after a patient is discharged from an ICU (not COVID-19 related) is about 15 days but there is a very wide range and a quarter stay 48 days or more in the hospital after ICU discharge.

‘In general the time in hospital depends on what co-morbidities a patient has, what the acute illness is that required ICU treatment, and the duration and intensity of ICU treatment.’

When the Prime Minister began self-isolating on March 27, he resolved to continue leading the government’s coronavirus response from self-isolation in his Number 11 flat.

Insiders say he was reluctant to relinquish responsibility, a decision which has since been criticised.

In the event the PM is bed-bound following his treatment, Mr Raab will continue to keep his hand on the tiller and steer the government through the health crisis.

Mr Raab, who is also first secretary of state and outranks his fellow cabinet minister, assured the machine of government would continue to operate while the PM battled his virus.

The UK does not have a constitutional line of succession, but Number 10 revealed Chancellor Rishi Sunak would take over if Mr Raab also fell ill.

Mr Raab will not be able to hire and fire colleagues. But asked who will be in control of the nuclear deterrent and armed forces, the PM’s spokesman said: ‘In relation to national security matters the First Secretary of State and the Cabinet have the authority and the ability to respond in the Prime Minister’s absence.’