Boris Johnson refused three times today to say if he would quit as Tory leader if he fails to win an outright majority in the general election on Thursday.

Mr Johnson was repeatedly asked about his future as polls suggested the Tory lead over Jeremy Corbyn‘s Labour could result in another hung parliament.

If that was to occur it would place a potentially catastrophic roadblock in the path of the Prime Minister’s plan to pass a Brexit Deal and get the UK out of the EU by the end of January.

With the Scottish National Party indicating it would be open to a coalition deal with Mr Corbyn, there is a chance Mr Johnson would be forced out, making him one of the shortest-serving PMs in British history.

But, in an interview with Sky’s Sophy Ridge on Sunday, he would not be drawn on his political future when asked three times if he would stand down if he fails to secure a majority.

Opinion polls show a wide variety of Tory leads but one by Sevanta ComRes today has Mr Johnson’s party just eight points ahead, which would not be enough for an outright majority. 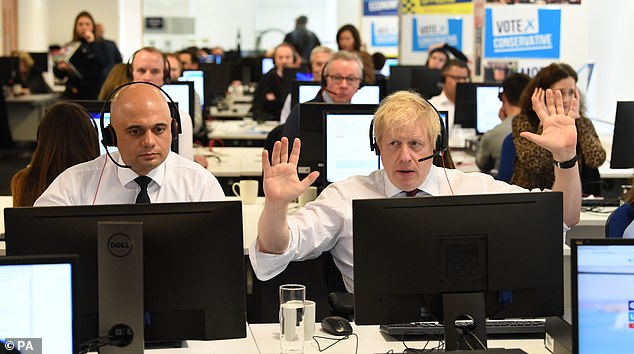 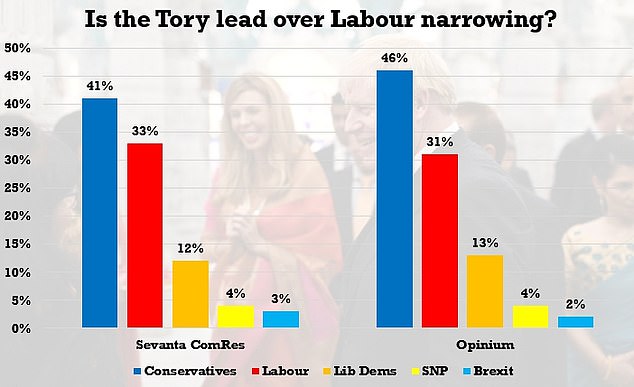 Opinion polls show a wide variety of Tory leads but one by Sevanta ComRes today has Mr Johnson’s party just eight points ahead, which would not be enough for an outright majority

The PM admitted he was nervous and ‘fighting for every vote’ ahead of the poll, but when asked if he would resign if it did not go his way, he replied: ‘The choice on Thursday is unbelievably stark, it’s between going forward with a one nation Conservative government that can get Brexit done…

‘Or spending the whole of next year in complete paralysis with two referendums, one on Scotland, one on the EU when Jeremy Corbyn cannot even tell us what his position is on Brexit and who is going to campaign for the deal that he proposes to do.’

Pressed again, Mr Johnson said: ‘If you don’t mind, Sophy, what I’m going to do is concentrate on the five days before us because that is what I think the people of this country would expect.

‘We have got a very short time to get our message across, it’s a message of hope and optimism about this country.’

The Mail on Sunday’s final poll of the election which puts the Conservatives 11 points ahead, just one point down on the party’s lead in the first survey at the start of November.

It is the fruit of a disciplined, safety-first campaign by the Tories, in which the Prime Minister has kept the jokes to a minimum and produced a manifesto shorn of risky policies such as the dementia tax, which helped to torpedo Theresa May‘s majority two years ago.

The threat from Jeremy Corbyn’s spendthrift policies, such as the offer of free broadband and discounted train fares, has also been negated by the Tories’ ending their regime of austerity and ploughing billions into public services such as the NHS. 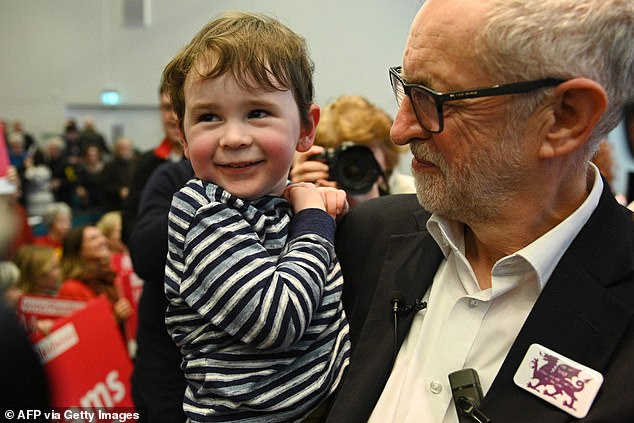 Long gone are the days when Labour could score easy political points by knocking the Conservatives on the Health Service: Mr Johnson now commands a 10-point lead on the issue, up from six points at the start of the campaign.

It means the party has been able to capitalise on the fact that health is regarded by voters as the most important issue facing families. 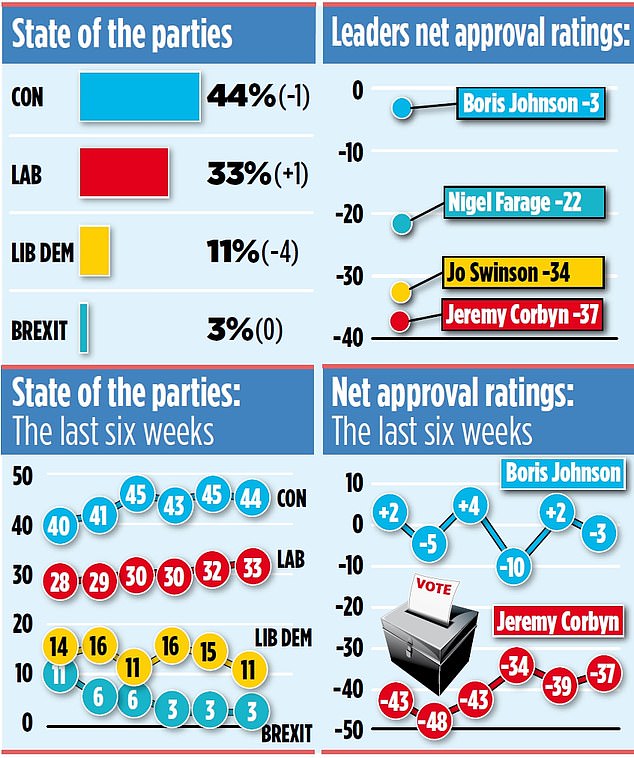 Mr Johnson used his Ridge interview to restate his insistence that there would be no checks for goods travelling between Northern Ireland and Great Britain under his Brexit deal, saying the Government documents shared by Labour were ‘wrong’.

Mr Corbyn said on Friday that his party had obtained a confidential government report which he claimed was proof that there would be customs checks between Great Britain and Northern Ireland after Brexit.

But the PM told Sky: ‘There’s no question of there being checks on goods going NI/GB or GB/NI because they are part of – if you look at what the deal is, we’re part of the same customs territory and it’s very clear that there should be unfettered access between Northern Ireland and the rest of GB.’

Mr Johnson also guaranteed that immigration to the UK would fall under his proposed system after Britain has left the EU.

‘I can make sure that numbers will come down because we’ll be able to control the system in that way and what I don’t think is right is to have an uncontrolled and unlimited approach to that,’ he said. 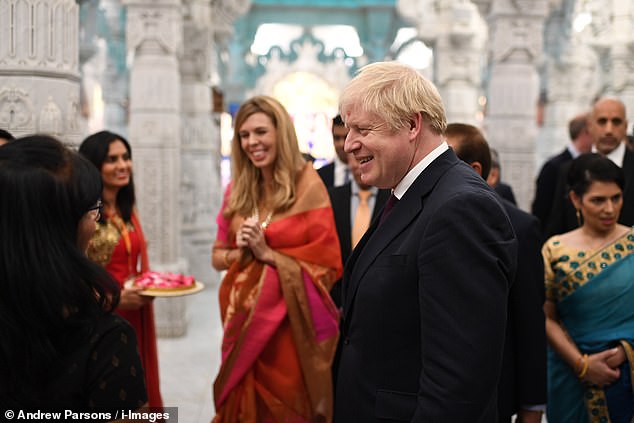 The PM confessed to having sometimes ridden a bicycle on the pavement when he was asked to reveal the naughtiest thing he has ever done.

‘When I was riding a bicycle every day which I used to do, I may sometimes have not always obeyed the law about cycling on the pavement,’ he admitted.

‘I may sometimes, OK – but I want you to know how firmly and strongly I disapprove of people who cycle on the pavement and I think it’s wrong and I feel bad about it but I might sometimes have scooted up onto the pavement rather than dismounting before.’

And he pledged: ‘I still strongly disapprove of anybody breaching the laws of the road and we’ll invigilate them very thoroughly if we’re lucky enough to be returned with a working majority on Thursday which is what we need to get Brexit done and move this country forward.’

BUOYANT BORIS NOT OVER THE LINE YET

The Tories appear to be maintaining a strong lead over Labour – but they’re not over the line yet.

The party has succeeded in increasing its share of the vote thanks, in part, to the Brexit Party’s decision to stand down in a number of constituencies – and is now broadly at the same level of backing it achieved in 2017.

Labour has also managed to steadily improve support, but only by about the same amount as the Conservatives.

As a result, the gap between the two parties has been maintained. Beyond the headline voting intention figures, the underlying data has also consistently favoured the Conservatives since the campaign began.

Both parties had policies in their manifestos that really resonated with voters. But when asked who was better to deal with specific issues, the Tories won out again.

At no point during the campaign has the party been fewer than 15 points ahead of Labour on the question of who would be best for the economy. It has enjoyed similar leads on Brexit and has even been ahead on the issue of health – traditionally a key Labour strength.

In the entire history of British politics it has never been the case that a party has led on the economy and leader ratings and then not won the most seats at the Election. With only days to go, however, there is still time for Britons to be persuaded to change their mind.

A major mistake, misstep or gaffe could still bring about a movement in the polls.

Turnout will also be significant. Could younger voters, who are traditionally less likely to vote but also largely favour Labour, be persuaded to turn out in greater numbers?

Will some Conservatives who feel uneasy about Mr Johnson’s Brexit plan decide to sit on their hands rather than take a walk to the polling station?

Last-minute tactical voting decisions in key seats could still have an impact.

Ultimately for Labour, preventing the Conservatives from achieving a majority may prove to be enough to form a government if it forms alliances with other parties.

The polls may favour the Conservatives, but none of the parties will be giving up yet.

Coachella 'has been postponed until October' amid coronavirus fears
Fleabag creator Phoebe Waller-Bridge CONFIRMED as co-writer of Bond 25
Are YOU too smart to fall for an online scam? Google quiz tests if users can spot phishing emails
Last photos of Jeffrey Epstein are released showing balding financier in his July mugshots
PIERS MORGAN: Don't be such a gutless coward about guns, Mr President
Bride accused of 'maths-shaming' for asking guest to complete a test
Powerful 7.5-magnitude earthquake strikes off Kuril Islands and tsunami warning is issued for Hawaii
Baby boy born in lockdown at 23 weeks weighing just over 1lb is set to go home