Boris Johnson is threatening to sack rebel Tory MPs who vote to block a No Deal exit from the European Union, it has been claimed.

The Prime Minister is set to prevent Remainer MPs within his party from standing at the next general election should they try to prevent a No Deal next week.

It comes as a group of cross-party group MPs has agreed to work together to delay Brexit, which could come in the form of a no-confidence vote.

Among the rebel Tory MPs thought to be involved include Philip Hammond, 63, and former justice secretary David Gauke, 47, who has said next week may be the only chance for MPs to stop a no-deal Brexit.

Mr Johnson, 55, will treat Commons votes next week as indications of confidence in his government – disqualifying rebel Tory MPs from contesting their seats, according to Sun columnist James Forsyth.

A number of options are being touted by MPs hoping to quell the possibility of a No Deal, including a legal bid in Scotland to prevent the PM from going ahead with proroguing the Houses until a full hearing of the case.

It is one of three separate legal efforts to derail the government’s strategy.

Judge Lord Doherty rejected a call for an interim interdict to block the suspension of Parliament, but said a full hearing would take place on Tuesday.

A court in Northern Ireland has also heard from lawyers representing anti-no-deal campaigners challenging the move and attempt to do the same at the High Court in London is also under way. This has been adjourned until next week. 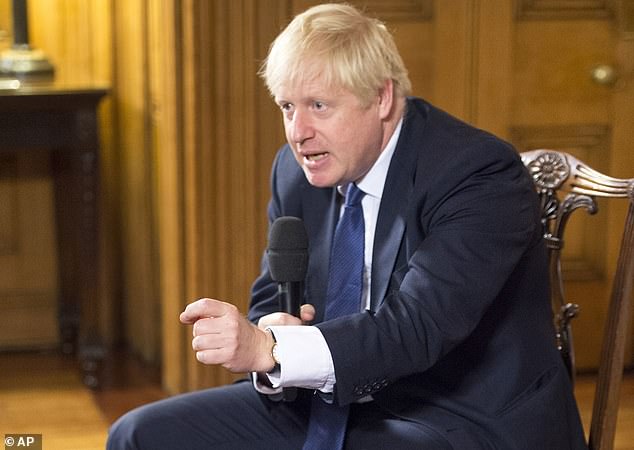 Mr Johnson (pictured yesterday at Downing Street), 55, will treat Commons votes next week as indications of confidence in his government – disqualifying rebel Tory MPs from contesting their seats, it has been claimed 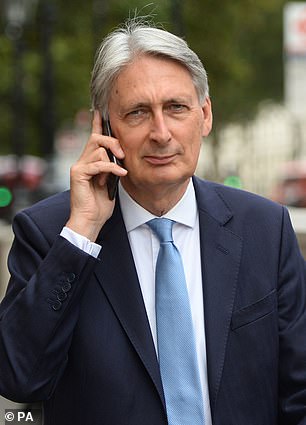 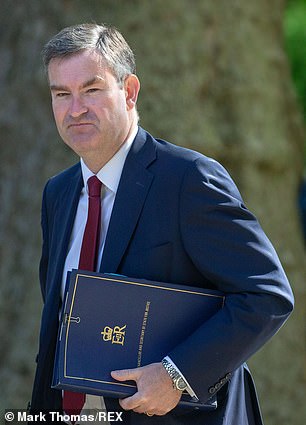 Among the rebel Tory MPs thought to be involved include Philip Hammond, 63, (left) and former justice secretary David Gauke, 47, (right) who has said next week may be the only chance for MPs to stop a no-deal Brexit

The challenges were launched after the Queen approved Mr Johnson’s request for Parliament to be suspended for five weeks from September 10.

The PM said on Wednesday that Parliament had to be prorogued so he could set out his Government’s new legislative agenda in a Queen’s speech and bring to an end the recording-breaking session which has lasted more than two years.

But MPs and others opposed to Mr Johnson’s Brexit strategy have said he is trying to limit their ability to stop the UK leaving the EU without a deal.

Mr Johnson’s most senior minister on Friday dismissed the furore over the suspension of Parliament as ‘nonsense’.

Foreign Secretary and First Secretary of State Dominic Raab insisted only around four days of Commons sitting time would be lost in addition to the already-planned party conference break.

He told reporters at a meeting of EU foreign ministers in Helsinki: ‘The idea this is some kind of constitutional outrage is nonsense.

‘It’s actually lawful, it’s perfectly proper, there is precedent for it and actually, fundamentally, for the people watching this, they want to see that we are leaving the EU but also talking about all the other things they expect us to be addressing.’

A third legal challenge brought by campaigner Gina Miller at the High Court in London ‘is being considered’, according to a judiciary spokeswoman.

Opposition leaders have issued a rare joint statement demanding Mr Johnson reverses his decision to suspend Parliament or put it to a Commons vote.

Labour, the SNP, the Liberal Democrats, Plaid Cymru, The Independent Group for Change and the Green Party said the PM’s actions were undemocratic, and had ‘the sole aim of stopping MPs from avoiding a no-deal Brexit’.

In a separate letter to his MPs, Labour leader Jeremy Corbyn encouraged them to join public protests against a no-deal Brexit.

He said: ‘There are also public protests across the country this Saturday, there will be a rally in Parliament Square on Tuesday evening, and I encourage Labour MPs to be present and to share our message.’ 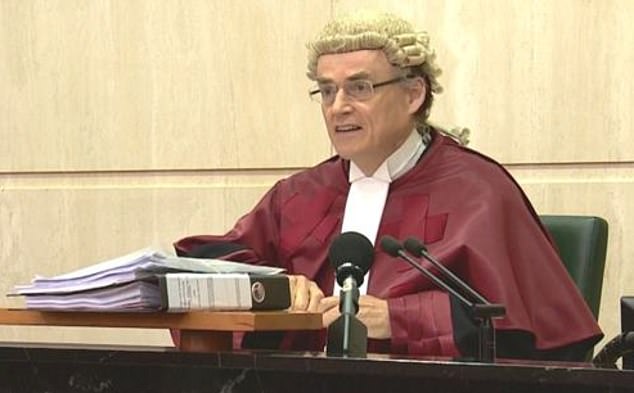 Judge Lord Doherty, pictured yesterday, ruled against an interim injunction in the Brexit legal case, but said a full hearing would take place on Tuesday

It followed thousands of people protesting outside Parliament on Wednesday evening, while there were smaller demonstrations in other towns and cities.

Leading rebel Tory David Gauke, a former justice secretary, said next week may be the only chance for MPs to stop a no-deal Brexit.

‘I think Parliament does have a responsibility to act and it may well be that next week is the only opportunity for us to do so.’

Mr Johnson faced resignations on Thursday by Scottish Conservative leader Ruth Davidson and veteran Tory minister Lord Young, in part due to the Government’s approach to leaving the EU.

It comes as Mr Johnson yesterday read the riot act to Remainer rebels today warning they are making a Brexit deal less likely.

He said the frantic efforts by MPs to block No Deal made the EU less likely to compromise on the Withdrawal Agreement.

When deciding whether to give ground, European leaders would have ‘at the back of their minds’ the idea that Brexit could still be cancelled.

The premier also said failure to leave the EU would have ‘catastrophic’ consequences for the UK political system.

The stark message, in a round of broadcast interviews, came after Tory rebels confirmed they have been discussing with Speaker John Bercow how they could try to bind the PM’s hands. 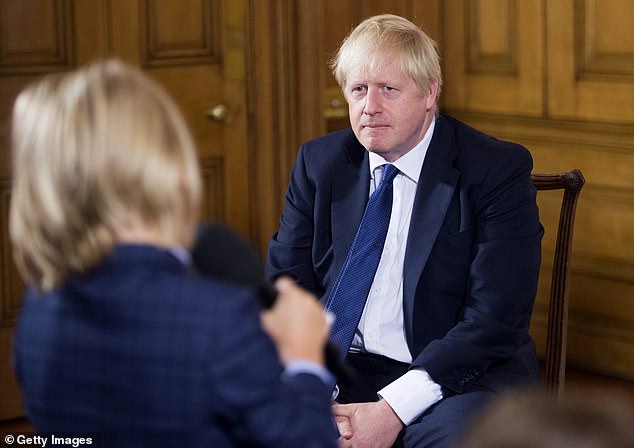 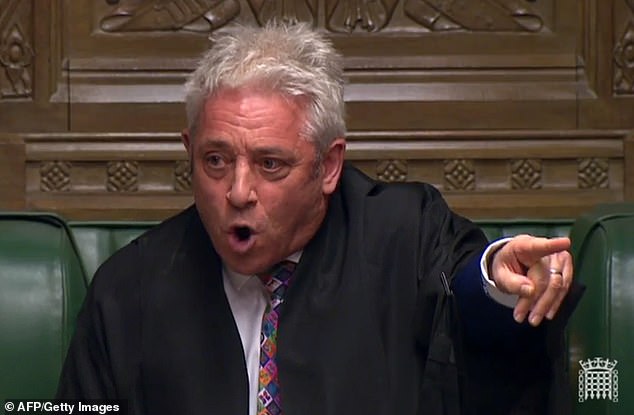 Mr Bercow interrupted his family holiday in Turkey to issue an extraordinary tirade at Mr Johnson for announcing that Parliament will be prorogued .

Sir John Major also yesterday dramatically threw his weight behind a legal bid to stop Boris Johnson from suspending Parliament in the run-up to Brexit.

The former PM said he was joining a judicial review of the move that is being brought by Gina Miller.

Sir John said it was not acceptable for Mr Johnson to prevent MPs from ‘opposing Brexit plans’.

The stage is set for a huge battle next week, with the Opposition and more than a dozen Conservatives joining forces to try to bind the PM’s hands.

Meanwhile, the government has signalled it will use all measures possible to ensure the country leaves the bloc on schedule, with or without a deal.

Tory former cabinet minister Oliver Letwin today insisted there was still time to pass legislation that could force the premier to delay the Brexit date, even if Parliament is prorogued for more than a month from the middle of September.

Sir Oliver said he hoped that by the end of next week Mr Johnson would know that he must seek an extension. He also confirmed he had been discussing the options with Speaker John Bercow.

Allies of Mr Bercow have suggested he is on a ‘suicide mission’, and is ready to bend procedure rules to help Remainer MPs in the fight with the government.

Dublin ramped up Brexit tensions today by again dismissing Mr Johnson‘s call for the hated backstop to be ditched.

Irish deputy PM Simon Coveney insisted the PM had not offered a ‘credible’ alternative, and the idea of settling the issue after the UK leaves was ‘not going to fly’.

In an apparent attempt to assuage rebel Tories, Downing Street has said the UK’s team of Brexit negotiators will sit down with their EU counterparts twice a week during September ‘with the possibility of additional technical meetings, to discuss a way forward on securing a new deal’.

How an explosive week in British politics could play out

The Brexit process reaches what could be a make-or-break stage next week as Boris Johnson and MPs engage in an extraordinary test of strength.

Tory rebels are hoping that by the end of the week they will have forced Mr Johnson to admit he must extend the October 31 deadline rather than try to leave without a deal.

But if they fail, the PM could emerge strengthened – and if they win there is mounting speculation he could opt to call an election rather than bow to their will.

MPs and peers will start massing at Westminster on the last day of the summer recess.

Remainers are likely to be putting the final touches to their plans for taking control of Commons business and passing legislation to block No Deal.

The government will be mobilising its forces to resist, in what promises to be an unprecedented clash between the executive and the House.

The Commons formally returns. Speaker John Bercow is likely to give his response from the chair to Boris Johnson’s decision to prorogue Parliament in mid-September until October 14. He has already branded the idea a ‘constitutional outrage’.

Remainers are expected to table a request for an emergency debate under Standing Order 24. Mr Bercow is likely to approve the request, and bend procedural rules to allow them to use the time to table a business motion.

If the rebels win a crunch vote, they would be able to take control of the Commons order paper and pave the way for a short piece of legislation ordering the PM to seek a Brexit extension.

They could also add extra sitting days, with speculation the House might sit on Friday and through the weekend. There has not been a Saturday sitting since 1982, discussing the Falklands War.

Away from Westminster, a court in Edinburgh is set to consider a legal challenge to Mr Johnson’s proroguation plan.

Consideration of the Bill could start, potentially wiping out plans for the spending review to be presented and Mr Johnson’s first PMQs.

The Bill will need support from Tory rebels successfully to clear its Commons stages, but there appear to be more than enough willing to act to avoid No Deal.

On Thursday, the High Court in London is due to consider another judicial review of Mr Johnson’s proroguation plan, which could offer more drama.

Former PM John Major, Remain campaigner Gina Miller and Labour deputy leader Tom Watson are among those involved in the case claiming that Mr Johnson is acting beyond his powers to silence Parliament.

The Houses are not currently due to sit, but there is a fair chance rebels will try to speed the legislative process by working through the weekend.

The Lords looks set to present the biggest challenge to rebel hopes, with Eurosceptic peers threatening a huge fillibustering effort to stop the Bill going through.

If the law has not passed by the time the House prorogues – which could happen as early as Monday – it will be wiped out, leaving Remainers with little or no time to try again when Parliament returns in mid-October.

But if they manage to get a measure on the statute book ordering Mr Johnson to seek and accept an extension from the EU, he could opt to call an election rather than obey. October 24 is regarded by many as a possible polling day.

DJ who has broadcast from garden shed for 44 years has been offered show on local radio station
Five-ingredient recipe for 'miracle spray' that will clean up floors, showers, stove tops AND grout
Brazil's Haddad makes final push to win over Lula's...
Juul accused of selling one MILLION contaminated vaping pods
Iran says its gunboats chased down Royal Navy's HMS Duncan - but experts say claim is false
Two academics used their four-year-old child as a 'decoy' when they tried to steal £750 from Harrods
Trump argues Pelosi hasn't sent impeachment articles because she has 'no case'
I'm A Celebrity line-up 2019 'leaked with full cast unveiled' with Caitlyn Jenner and Adele Roberts