Boris Johnson tonight urged Britons to get back into work – in an apparent shift from the government’s ‘work from home if you can’ edict.

The PM suggested people should return to the office if it is ‘safe’ as he held an online Q&A session with members of the public.

The comments seem to mark a significant change in the message from ministers, amid mounting concerns about a bloodbath of jobs on the high street – with 60,000 facing the axe this week alone as lockdown wreaks havoc on the economy.

Cafes and coffee shops have been slashing their workforce as demand has all-but dried up in many towns and cities, with huge numbers still working from home rather than going to the office.

The Government’s concerns now seem to shifting to the economic health of the country, with fears that 1980s-style unemployment will make a comeback unless normal consumer behaviour resumes. Forecasts now predict that the UK jobless rate will top 10 per cent by the end of the year.

Although the Prime Minister has consistently said his Government ‘follows the science’ on coronavirus policy, it is not yet clear whether Chief Medical Officer Professor Chris Whitty and Sir Patrick Vallance, the Chief Scientific Adviser and Sage chairman, have approved the change in message.

There are concerns that many staff will be unable to return even if they want to, as social distancing rules mean there is not enough physical space on offices and public transport cannot run at full capacity.

Mr Johnson said today: ‘I want people to go back to work as carefully as possible. It’s very important that people should be going back to work if they can now.’

The move by the PM came as: 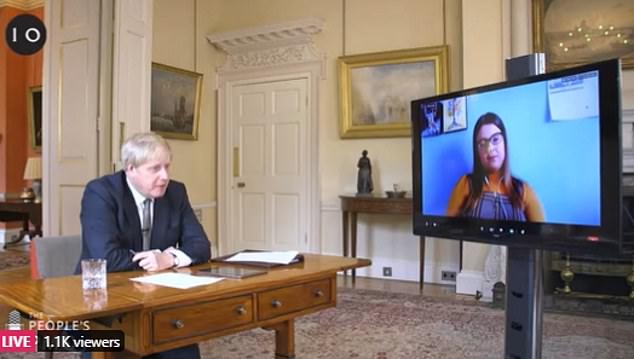 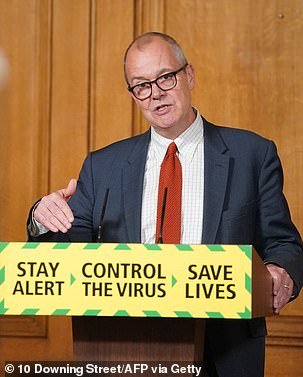 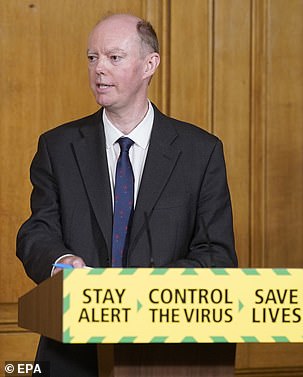 Although the Prime Minister has consistently said his Government ‘follows the science’ on coronavirus policy, it is not yet clear whether Chief Medical Officer Professor Chris Whitty (right) and Sir Patrick Vallance (left), the Chief Scientific Adviser and Sage chairman, have approved the change in message

In his remarks today, the Prime Minister said: ‘I think everybody has sort of taken the ”stay at home if you can” – I think we should now say, well, ”go back to work if you can”. Because I think it’s very important that people should try to lead their lives more normally.

‘I want to see more people feeling confident to use the shops, use the restaurants, and get back into work – but only if we all follow the guidance.’

Mr Johnson also hinted that face coverings will be made compulsory in shops in a bid to reassure nervous customers.

He admitted that ‘the balance of scientific opinion seemed to have shifted’ over how effective makeshift masks can be.

‘I do think we need to be stricter in insisting people wear face coverings in confined spaces where they are meeting people they don’t normally meet,’ Mr Johnson said.

‘We are looking at ways of making sure that people really do have face coverings in shops, for instance, where there is a risk of transmission.’

The shift came after lockdown was significantly eased in England from last Saturday, with pubs and restaurants allowed to open as long as they have ‘Covid Secure’ precautions in place.

However, the PM’s advice for UK employees to work from home where possible seeming still applied until now. 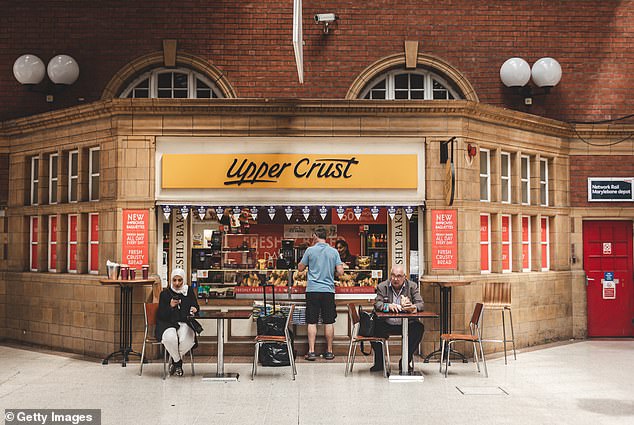 Many food and drink outlets have been hit hard by the fact that millions of Britons have worked from home during the coronavirus crisis. Pictured, Marylebone Station in London 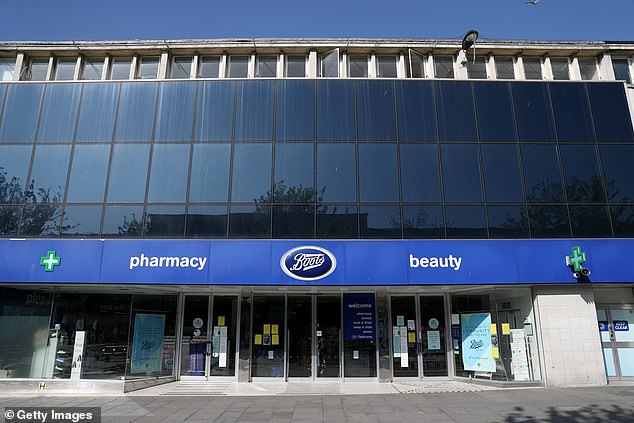 Around 4,000 jobs are set to go at Boots, with 48 of its opticians stores expected to close

In response to the Prime Minister’s new advice, General Secretary of shop and distribution workers’ trade union Usdaw, Paddy Lillis, told MailOnline: ‘The Covid-19 pandemic is still very much with us and Usdaw urges the Government to proceed with caution and follow the science.

How many jobs are at risk across the UK?

‘The releasing of lockdown must happen at a pace that ensures there isn’t a second spike in infections. Usdaw hasn’t called for the mandatory wearing of face coverings, but now it has been introduced in Scotland we will monitor how it works.

‘We welcome anything that helps to keep customers and shop workers safe, but the most important measure is to maintain proper social distancing and hygiene.

‘That’s why Usdaw is urging employers to stay with the established two-metre distancing, keep using screens at tills and limiting the number of shoppers in store at any one time.

‘We also want to be clear that it should never fall on shopworkers to enforce the wearing of face coverings, they are already dealing with more abuse than normal and this could be another flashpoint.’

In more evidence of the woes on the high street today, pharmacies insisted they need £370million of loans for PPE and other coronavirus measures turned into a grant by the government.

The chair of the National Pharmacy Association Andrew Lane said: “There are many community pharmacies up and down the country on the financial brink, crippled by the extra cost of COVID19. If they close, the towns and villages they serve will lose a popular and life-saving asset.

‘Similarly, if the government is serious about stopping the slow death of the high street it needs to act now and put its money where its mouth is.

‘The government managed to find more than a billion pounds for the arts sector yet is dithering over financial aid to frontline health workers.’

Earlier today the owner of Wagamama and Frankie & Benny’s said one in 10 of its restaurants will not reopen before the end of the year.

The Restaurant Group said the stores – largely in airports – will open next year at the earliest as they are unlikely to attract enough customers to make it worthwhile.

Those affected are in areas ‘where footfall is anticipated to remain considerably weak’, the company said in an update for shareholders on Friday.

It raises concerns for the jobs of those who work at the sites, as the Government’s furlough scheme, which covers salaries, will end in October.

It is the latest firm to reveal it is struggling due to the coronavirus crisis, following Boots, John Lewis, Rolls Royce and Burger King this week.

The news is another blow to Rishi Sunak’s battle to keep Britons in work as it emerged nearly 60,000 workers face redundancy.

A series of businesses pulled the trigger on layoffs less than a day after the Chancellor delivered a £30billion package designed to keep people off the dole. 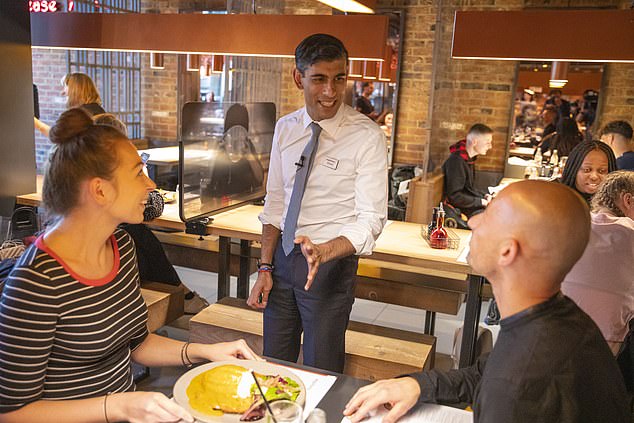 The Restaurant Group, which owns Wagamama (pictured, the Chancellor at a central London site yesterday) said the stores – largely in airports – will open next year at the earliest

The Restaurant Group did not immediately provide an answer to what will happen to its staff.

All the stores that will reopen this year will have started serving customers by the end of September, the company said.

Meanwhile, 60 per cent of its sites that open before the end of August can take advantage of the Government’s Eat Out to Help Out scheme, which gives diners up to 50 per cent off their meal during the first three days of the week.

One in four of the Restaurant Group’s restaurants and pubs will be open by the end of this month.

It told investors: ‘The group has now started a phased reopening of its restaurants and pubs for eat-in trade in line with Government guidance.

‘We are very pleased to be able to welcome back our customers and colleagues ensuring that their safety is paramount, whilst maintaining an enjoyable experience.

‘The diversified portfolio of the group allows each division to adapt to the challenges of social distancing uniquely, whilst keeping the customer at the heart of every decision.’

The news comes at a turbulent time for the company. Last month it announced 125 Frankie & Benny’s sites will close permanently, with 3,000 jobs on the line.

It will be left with around 400 restaurants and pubs after the restructuring. The company’s board took a 40 per cent pay cut at the start of April as they tapped into Government furlough money.

On Friday they upped their pay, but will still take 20 per cent less than normal until all staff are off Government-backed furlough.