Boris Johnson must force a general election before the October 31 Brexit deadline if he is to have any chance of winning a majority, a bombshell new poll suggests.

The Tories polled at 37 per cent and Labour trailed on 30 per cent when people were asked how they would vote in a snap poll before Halloween.

But Tory support dipped to 28 per cent – tied with Labour – when people were asked how they would vote in an election held after the current departure date.

Much of the lost Tory support in the second scenario appears to jump to the Brexit Party and the new numbers are likely to intensify calls for Mr Johnson to strike an electoral pact with Nigel Farage.

Mr Farage has said he will only consider an alliance with the PM if he agrees to pursue a ‘clean break’ No Deal Brexit from the EU.

It came as the premier arrived in Scotland this morning and was given a tour of Peterhead Fish Market as he prepared to meet the Queen at Balmoral Castle in Scotland this evening as Britain’s political crisis deepened.

The new survey, conducted by ICM Research, illustrates how important it is for the Prime Minister to secure an early election on his preferred date of October 15 after he vowed yesterday he would rather be ‘dead in a ditch’ than delay Brexit.

However, the chances of him getting his wish appear to be shrinking after Jeremy Corbyn and the SNP reportedly struck a deal not to back a poll taking place before a crunch meeting of the European Council on October 17 when the PM could be legally required to ask for an extension.

Meanwhile, many senior figures in the Labour Party are adamant that an election must not take place until November because they want to force the PM to choose between asking the EU for an extension and resigning.

A rebel anti-No Deal law is expected to make it onto the statute book on Monday which will require the premier to seek a Brexit delay beyond October 31 if Britain and Brussels have not struck an agreement in the run up to Halloween.

The government will hold another vote on Monday in a last ditch bid to try to force an election before parliament is then suspended.

But with Labour, the SNP and other opposition parties now reportedly in agreement that they will not support a poll before the end of October at the earliest, Mr Johnson is likely to be placed in an impossible position.

He has vowed to deliver Brexit ‘do or die’ and with or without a deal on October 31 and has repeatedly said he will not in any circumstances ask Brussels for an extension.

But if MPs block an election again and a No Deal split becomes impossible, Mr Johnson may have no other choice but to quit.

Mr Johnson will be hoping his visit with the monarch this evening – he will be accompanied by girlfriend Carrie Symonds – will help him forget about a difficult day yesterday.

His brother Jo quit the Cabinet, he was heckled by members of the public and he prompted controversy for using a wall of police officers as the backdrop for what critics labelled a ‘political stunt’ speech.

Separately, Mr Johnson was facing growing pressure to restore the whip to 21 Remainer rebels as ex-Cabinet minister Sir Michael Fallon said there should be ‘some kind of appeal mechanism’. 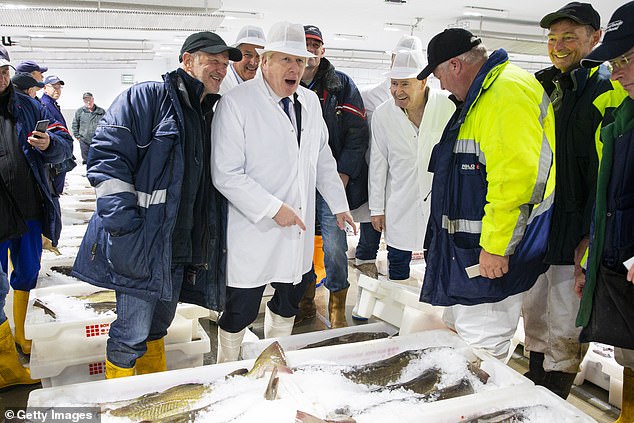 Boris Johnson arrived in Scotland this morning ahead of a trip to Balmoral to see the Queen. He is pictured being shown around Peterhead Fish Market 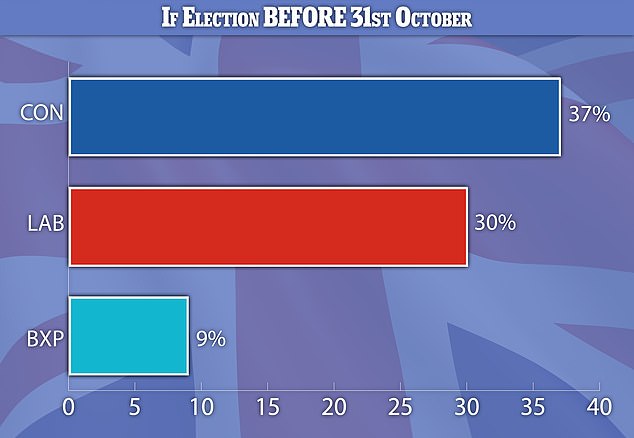 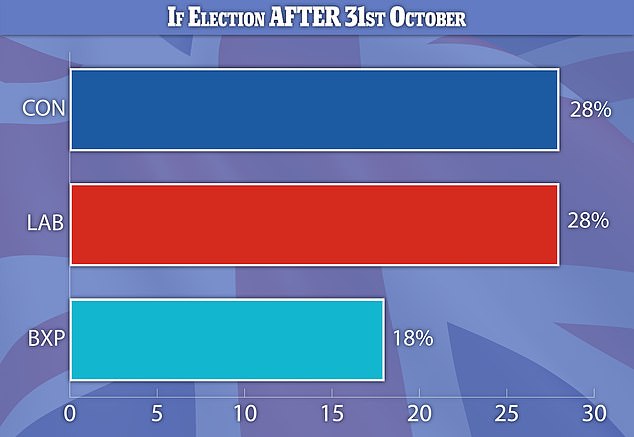 But if he is made to wait until after October 31, and Brexit is delayed, Mr Johnson could see support for the Tories dip nine per cent 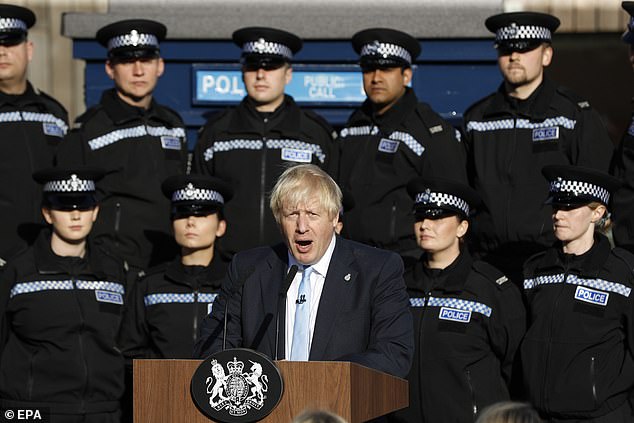 New poll came amid growing anger over PM’s speech in front of police in Yorkshire yesterday. Senior police figures have called on Mr Johnson to apologise for using the officers as the backdrop to a ‘political speech’

The PM failed in a bid earlier this week to force an early election as Mr Corbyn and other opposition leaders failed to back the move.

Mr Johnson tabled a motion under the Fixed-term Parliaments Act which requires the support of two thirds of MPs in order for a poll to be called.

But he fell far short of the magic number of 434 MPs as Labour and other parties abstained.

Mr Johnson responded to the set back by telling opposition MPs to reflect over the weekend on his claim that the current stalemate in Parliament is ‘unsustainable’.

Yesterday Jacob Rees-Mogg, the Commons Leader, confirmed the government will try again on Monday and hold a repeat vote on forcing an election.

Mr Corbyn had said that once an anti-No Deal bill has become law he would back an election.

But it now looks increasingly likely that opposition MPs will try to trap Mr Johnson in Downing Street for all of October and force him to choose between breaking his ‘do or die’ promise and resigning.

Mr Corbyn and the SNP’s Westminster leader Ian Blackford held secret talks yesterday when they agreed not to allow an election to be held before October 19.

But the expectation is that Labour will ultimately not agree to an early poll taking place until November.

The thinking is that by waiting until November, Mr Johnson will be forced to seek an extension – as required by law – if he wants to remain in Downing Street.

Such an outcome would likely lead to Mr Johnson and the Tories being eaten alive by Nigel Farage and the Brexit Party.

Today’s poll by ICM Research appears to confirm that Mr Johnson will be in enormous trouble politically if he does backtrack on his Brexit promise – something he is adamant he will not do.

Westminster voting intention for an election before October 31 put the Tories on 37 per cent, Labour on 30 per cent and the Brexit Party on just nine per cent.

But for an election after October 31 the Tories were on 28 per cent and so were Labour while the Brexit Party were on 18 per cent.

Mr Johnson suffered a difficult day yesterday as his political week went from bad to worse.

First his brother Jo blindsided Number 10 by announcing his resignation from the Cabinet despite a late night phone call from the PM urging him not to quit.

Jo Johnson dealt his sibling a major body blow as he said he could not square ‘family loyalty and the national interest’ over Brexit.

The PM then tried to put a brave face on his brother’s bombshell decision as he praised Jo as a ‘fantastic guy’ and a ‘brilliant minister’.

He then tried to downplay the significance of his brother’s decision as he told reporters following a speech in Yorkshire that the pair disagreed on Brexit – just like many other families across the UK.

Jo Johnson said this morning that he wished his brother ‘all the best’ and insisted he wanted ‘this government to succeed in what it is doing’.

Mr Johnson’s address to the nation then sparked controversy as he stood in front of a wall of police officers and repeatedly attacked Mr Corbyn.

Labour accused the PM of a ‘completely unacceptable political stunt’ while senior police figures said Mr Johnson should apologise for using officers for what critics described as a ‘Donald Trump-style photo op’.

John Apter, the national chairman of the Police Federation of England and Wales, led the criticism of the premier as he said he was ‘surprised’ that officers had been used ‘for a political speech’.

He told The Times: ‘I am sure that on reflection all concerned will agree that this was the wrong decision and it is disappointing that the focus has been taken away from the recruitment of 20,000 officers.’

Yvette Cooper, Labour the chairwoman of the Commons Home Affairs Committee and Yorkshire MP, said it was ‘completely unacceptable’ for Number 10 to have drafted in the officers. 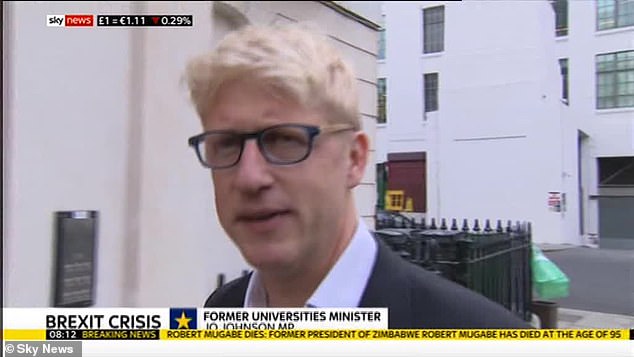 Jo Johnson, pictured this morning, shocked Westminster yesterday as he resigned from the government over Brexit 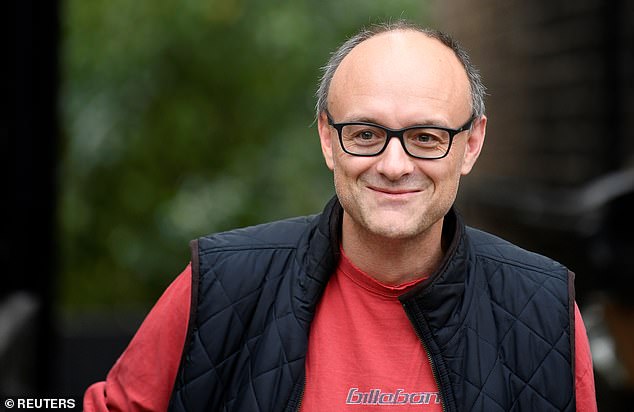 ‘This is an abuse of power by Boris Johnson, making so many police stop their training and work to be part of his political stunt,’ she said.

‘They have a job to do here in West Yorks, and they train and work hard for the whole community – completely unacceptable to use them in this way.’

Mr Johnson was then reprimanded by a member of the public as he met voters in Leeds.

The PM appeared lost for words as he was told by a man that he should be in Brussels negotiating Brexit.

Mr Johnson was accosted by the man who yelled: ‘You should be in Brussels negotiating. You are not. You are in Morley in Leeds.’

The Prime Minister attempted to explain he had been negotiating, but the disgruntled man continued: ‘You’re playing games.’

Mr Johnson retorted: ‘What I think people want us to do, is to leave the European Union on October 31.’

Footage then emerged of another member of the public shaking hands with Mr Johnson and telling him: ‘Please leave my town.’

Meanwhile, the PM faced growing pressure to reverse his decision to expel 21 Tory Remainer rebels after they backed a bid to block a No Deal Brexit.

The decision to strip the whip from the rebels has prompted widespread anger on the Tory backbenches with many MPs blaming Dominic Cummings, the PM’s top adviser, for the hardline approach to discipline.

Mr Cummings was yesterday accused of overseeing a ‘Stalinist-style purge’ of the Conservative Party as numerous figures called for the rebels to be allowed to return to the Tories.

This morning, Sir Michael, the former defence secretary, said there should be a way back for the rebels.

He told the BBC: ‘I would hope there would be some kind of appeal mechanism that they can find now so they get the chance to state their case.’

Sir Michael, who has said he will stand down at the next election, added: ‘I also worry that it sends the wrong message to Remainers – particularly in my party.

‘I think, by definition, some five million Conservatives must have voted Remain and we have got to be very careful not to drive them into the hands of Remainer parties like the Liberal Democrats in England or the Scottish nationalists in Scotland.’

Sir John Major last night took aim at Downing Street’s approach as he accused Mr Johnson of presiding over an unelected ‘faction of a faction’.

The former Tory prime minister accused Mr Johnson of running a ‘Government by bluster and threat in a climate of aggressive bullying’ and turning the Conservatives into a ‘mean-minded sect’.