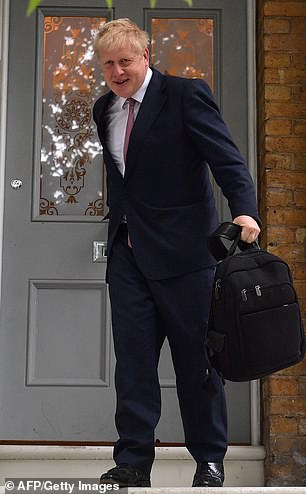 Boris Johnson today won a High Court challenge against a court summons over claims made during the referendum campaign that the EU receives £350million a week from the UK.

The former foreign secretary’s legal team challenged the summons for him to attend Westminster Magistrates’ Court as they blocked a controversial private prosecution by campaigner Marcus Ball.

Mr Ball, a Remainer, had been trying to prosecute him for three allegations of misconduct in a public office.

Mr Johnson’s lawyers said District Judge Margot Coleman ‘erred in law’ when she issued the summons and argued the attempt to prosecute the Conservative leadership hopeful was the culmination of a ‘politically-driven process’.

Giving the court’s decision, Lady Justice Rafferty, with Mr Justice Supperstone, said: ‘We are persuaded, Mr Darbishire, so you succeed, and the relief that we grant is the quashing of the summonses.’

Adrian Darbishire QC, for Mr Johnson, had earlier said: ‘The only rational conclusion which could be reached (by the district judge) was that the prosecution was politically motivated and, therefore, vexatious.’ 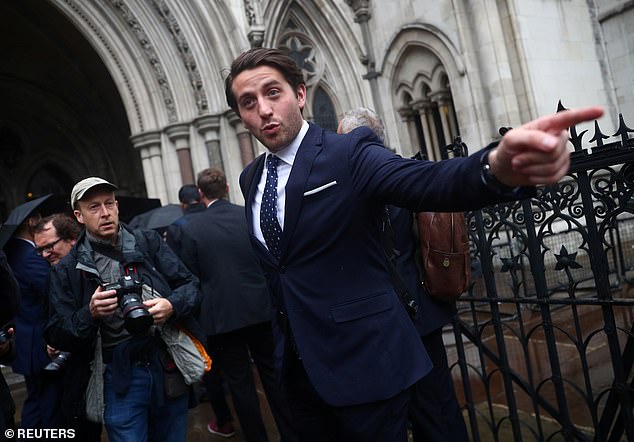 Mr Darbishire told the court: ‘This case clearly represented on the face of it – I will be neutral – a politically-originated… attempt to prosecute a senior politician using a common law offence for false statements in the course of public debate, a use to which that offence had never been put in this country or any common law jurisdiction.’

He added that the proposed private prosecution concerned ‘an area of public life that has never previously been subject to the attentions of the criminal law’.

Mr Darbishire said the alleged offences relate to Mr Johnson’s ‘adoption and promotion of one of the central slogans’ of the Vote Leave campaign. 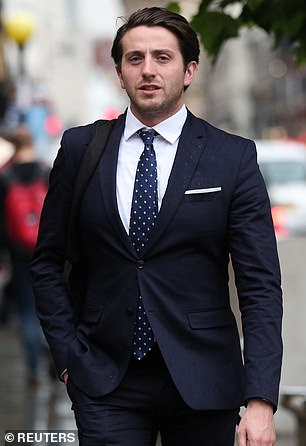 He said: ‘The claim is ‘We send £350 million a week to the EU’ – the interested party (Mr Ball) says that was misleading, essentially and simply because it was the gross figure when a net figure was called for. That is what it comes down to.’

‘It is suggested that Mr Johnson, and presumably Mr Gove, Mr Duncan Smith and anyone else who used that message, was misleading the voters.’

Mr Darbishire told the court: ‘It has never been the practice of the state in this country, or any other common law democracy so far as can be discovered, to engage in, or to permit, the criminal prosecution of political opponents for the expression of views, or the presentation of political arguments, in a manner which is considered to be objectionable, misleading or even plain wrong.

‘No prosecution for misconduct in public office, or for any other offence, has ever come close to doing so.’

The judges were urged to quash the decision of District Judge Coleman and declare that the application for summonses ‘did not disclose all elements of the offence of misconduct in public office and are vexatious’. 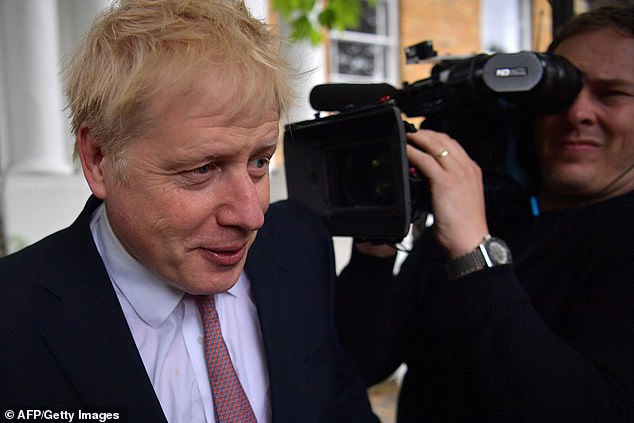 The former foreign secretary, pictured today, is challenging a summons for him to attend court

Mr Darbishire told the court that the making of false statements ‘must be as old as political campaigning itself’ and that Mr Johnson’s use of the £350 million figure could not be characterised as misconduct.

He said: ‘Misconduct in public office cases are about secret abuse, corruption, concealing your pecuniary interests. This was a figure that, as soon as it was said, was disputed.

‘It was batted to and fro, the people who promoted it were challenged about it. There was nothing secret about it, no-one was claiming special knowledge about it.’ 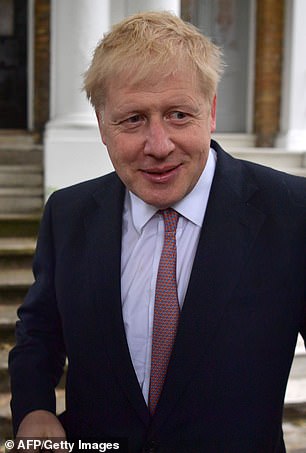 Mr Johnson’s lawyers say the summons was unlawful. The politician did not have to appear and did not attend the hearing

Mr Darbishire added: ‘It was just a political claim open to and available for contradiction and debate, and it was, and is, for the good sense of the electorate to discount it if they choose so to do.

Mr Darbishire said: ‘It must be extremely rare for a private prosecution to be launched for a political purpose.’

The barrister added that ‘to try to use for political purposes the criminal justice system is an extremely grave and troubling thing to do if that is the motive of a prosecution’.

In written submissions before the court, Mr Darbishire states: ‘For the avoidance of doubt, it is denied by the claimant that he acted in any way improperly or dishonestly. Public debate about the accuracy or otherwise of the £350million continues to this day.’

Mr Johnson’s QC tells the two judges in his written argument: ‘In drawing upon freely-available public statistics for the purpose of a political argument, Vote Leave, and those who supported and spoke for that campaign, were clearly not acting as public officials, nor exercising any public power. 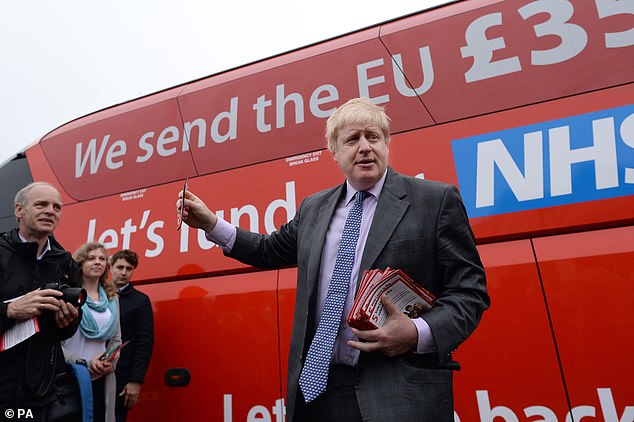 ‘They made no claim to special knowledge of the sums expended by the UK, they exercised no official power in promoting that message and the assessment and publication of the level of the UK’s total EU spending formed no part of Mr Johnson’s official duties.’

He says: ‘It is abundantly clear that this prosecution is motivated by a political objective and has been throughout.’

Mr Johnson did not have to appear and did not attend the hearing.

Jason Coppel QC, representing Mr Ball, told the court: ‘The right of a citizen to institute a private prosecution in this country is an ancient and significant constitutional right.’

He added: ‘It provides an important means whereby an individual can seek to right what he perceives to be a wrong through the court process.

‘More specifically, the right enables an individual to take action to bring an alleged criminal to justice where, for whatever reason, the public prosecution authorities have not taken action against him.’

Mr Coppel said in written submissions: ‘The district judge was entitled to conclude, on the information and evidence before her, that the low threshold for issue of a summons had been surmounted and that the various objections raised by the claimant were properly matters for evidence and ruling at a trial.

‘No public law error in her decision has been demonstrated, or even alleged, by the claimant.

‘Similarly, it was open to the judge to conclude, and she was right to conclude, that she should not take the exceptional course of refusing to issue the summons on grounds that the prosecution is vexatious.’

Mr Coppel added: ‘The prosecution raises an issue of significant public and political interest, interest which has been heightened by recent political events – including the candidacy of the claimant for leadership of the Conservative Party.

‘But that does not establish that the motivation of the interested parties as prosecutors is improper, whether because it is a purely political motivation or otherwise.

‘The entirely proper motivation for the prosecution is to hold to account a high-profile politician and holder of public office for what is alleged to be significant misconduct in relation to an issue of great public importance.’

Mr Ball, 29, had claimed Mr Johnson lied during the 2016 referendum campaign by saying Britain gave £350million a week to the European Union. 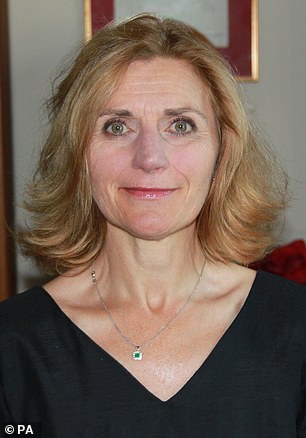 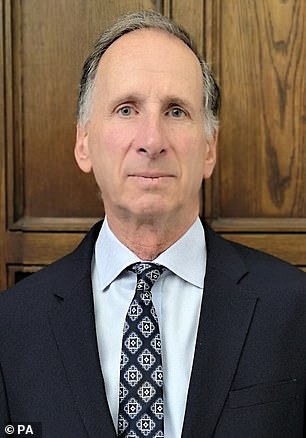 The entreprenuer crowdfunded more than £300,000 through an online campaign to bring the prosecution.

Speaking before the hearing today, Mr Ball said: ‘I’ve spent three years of my life working ridiculous hours for, per hour I believe, the minimum wage to bring this case because I believe in the merits of it. Somebody who was doing this to create a stunt would not act like that.’

Mr Ball previously said contesting Mr Johnson’s application to the High Court was a ‘particularly expensive part of the legal process’ and called on the public to donate to his campaign. ‘When politicians lie, democracy dies,’ he said.

In a written decision on May 29, Judge Coleman said: ‘The allegations which have been made are unproven accusations and I do not make any findings of fact.

‘Having considered all the relevant factors I am satisfied that this is a proper case to issue the summons as requested for the three offences as drafted. The charges are indictable only.

‘This means the proposed defendant will be required to attend this court for a preliminary hearing, and the case will then be sent to the Crown Court for trial.

‘The charges can only be dealt with in the Crown Court.’

The judge said Mr Ball’s case was that there is ‘ample evidence’ Mr Johnson knew his statements were false.

She added: ‘One example is given that in a televised interview in May 2016, the proposed defendant stated, ‘we send the EU £10 billion per year’, and that therefore he knew that the £350 million per week figure (£20 billion per year) was incorrect.’

A section of the judge’s ruling included Mr Johnson’s position, which described the application as ‘a (political) stunt’.

The £350 million figure was emblazoned on the red campaign bus used by Vote Leave during the referendum campaign, with the slogan saying ‘We send the EU £350 million a week, let’s fund our NHS instead’.

A spokesman for Mr Johnson said he would not be commenting on the case.

U.S. seizes North Korean ship over 'sanctions-busting' hours after Kim Jong-Un fires MORE missiles
Chelsea stars to agree 10 per cent wage cut after Cesar Azpilicueta sent text on behalf of the group
French President Emmanuel Macron says Europe must be stronger to prevent 'chaos'
Coronavirus: Passengers from Italy not checked at UK airports
Schoolgirl dies and 17 others are injured in knife attack in Tokyo
Autistic teens ARE being wrongly locked in mental heath hospitals
PICTURED: American citizen Paul Whelan arrested on spying allegations in Russia
How 39 desperate stowaway migrants were locked in their metal coffin and left to die