Boris Johnson‘s EU envoy delivered the UK’s long-awaited new Brexit blueprint to Brussels today – as the PM urged the bloc to be ‘reasonable’.

The legal text of the plan was handed over along with a letter to commission president Jean-Claude Juncker urging him to accept a ‘reasonable compromise’.

But he warns that the plans are now the only ‘broad landing zone’ for a deal.

Sources said the PM would walk away from the talks altogether if the EU rejects the plans outright, and focus on preparations for leaving without a deal on October 31.

One source said Mr Johnson could even boycott a crunch EU summit this month if Brussels refuses to consider the plans, as there would be ‘no point’ in continuing.

The PM tells Mr Juncker that he is anxious to strike a deal, adding: ‘If we cannot reach one, it would represent a failure of statecraft for which we would all be responsible. Our predecessors have tackled harder problems – we can surely solve this one.’ 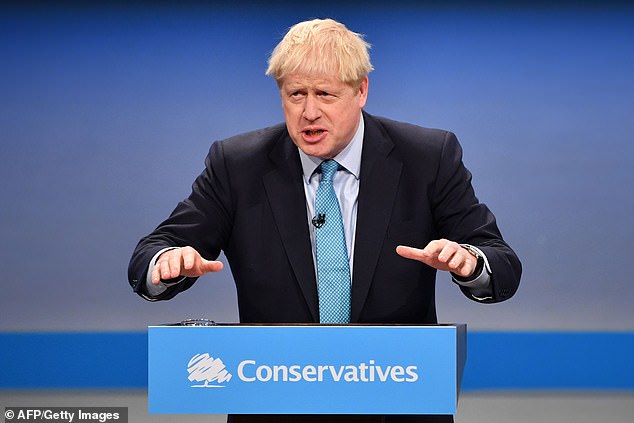 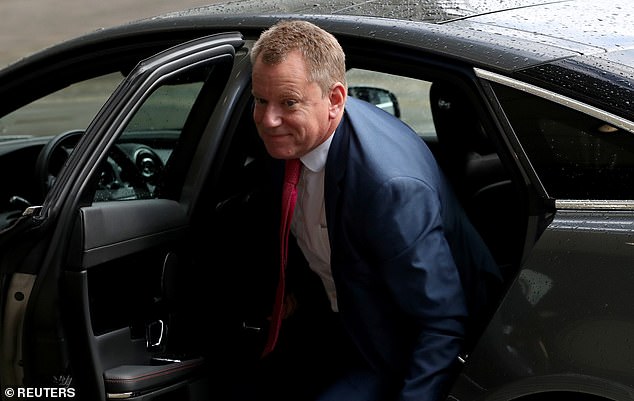 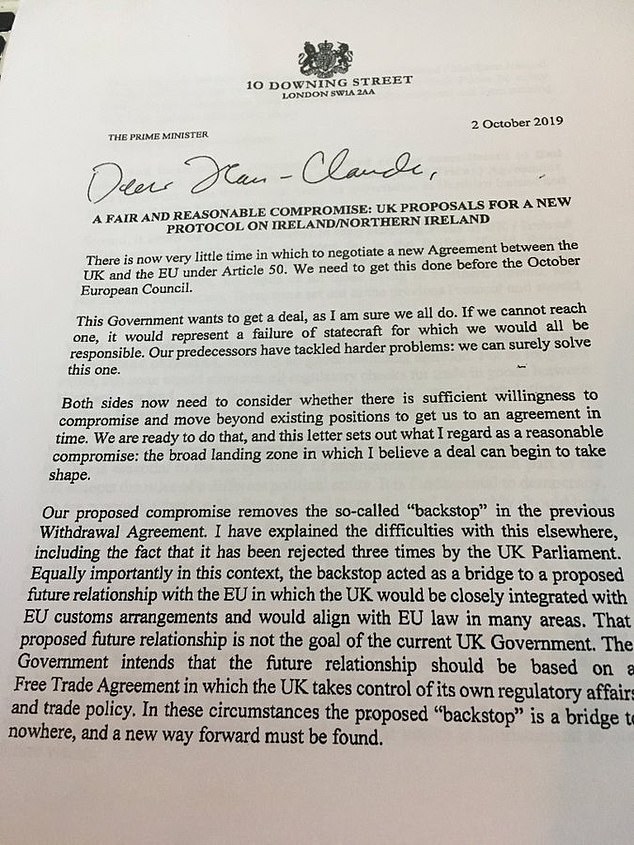 The PM tells Mr Juncker that he is anxious to strike a deal, adding: ‘If we cannot reach one, it would represent a failure of statecraft for which we would all be responsible.’

The new plan will be outlined in a 40-page document presented to senior EU officials in Brussels by Mr Frost, the PM’s chief Brexit adviser, this afternoon.

The plan would scrap the controversial Irish backstop altogether.

Instead, Northern Ireland would remain in the single market for all goods, meaning it would have to continue to follow a swathe of EU regulations. However, the Province will leave the EU customs union, meaning there would be no tariffs on goods trade with the UK.

However, the deal would involve customs checks on goods travelling between Northern Ireland and the Republic – an idea that has been a red line for both Brussels and Dublin until now.

And the Northern Ireland Assembly would have to give its consent on a rolling four-year basis, starting next summer. The assembly has not sat for two and a half years, and sources acknowledged that another method might have to be found to secure consent, possibly even including a referendum.

Ministers are also drawing up plans for a ‘New Deal for Northern Ireland’, which could provide billions in extra funding for the Province.

The DUP is understood to be ‘content’ with the plans in their current form.

And government sources said senior figures in Dublin had previously indicated they were willing to a to least discuss the ideas.

But No 10 is braced for a potential backlash that could kill the plans at birth, leaving both sides on course for No Deal.

Mr Johnson is expected to begin the process of selling the deal to other EU leaders this afternoon, with phone calls to Angela Merkel, Irish premier Leo Varadkar and Mr Juncker pencilled in for this evening.

The PM is also prepared to embark on a whirlwind tour of EU capitals in the coming days, provided Brussels does not reject the plans out of hand.

How would Boris Johnson’s plan to replace the backstop actually work?

Essentially, the plan is to create two Northern Irish borders at the end of the Brexit transition period, with the arrangements rolled out in January 2021.

One of them will be a regulatory border between Northern Ireland and the rest of the UK.

Effectively this would amount to a border in the Irish Sea with Northern Ireland remaining aligned with the EU on all single market rules for agriculture and industrial goods while the rest of the UK could do what it wanted in those areas.

That regulatory border would come with a proposed four year time-limit.

The second border would be between Northern Ireland and the Republic of Ireland and it would be purely relating to customs.

However, the UK is expected to ask the EU to grant wide-ranging exemptions on customs rules to make the border as frictionless as possible.

In simple terms, Northern Ireland would leave the customs union with the rest of the UK but it would remain in parts of the single market until 2025. The plan has been dubbed ‘two borders for four years’.

In 2025, the Northern Irish Assembly would be asked how it wants to proceed, with two options on the table.

The first would be for Northern Ireland to continue to stay aligned with EU regulations.

The second would be to split from EU rules and then realign with the rest of the UK which would be assumed to have diverged from the Brussels regulations book in a number of areas by that time.

If Stormont opted for the second option it could risk the return of a hard border on the island of Ireland.

But it would be hoped that by 2025 there would be technological solutions which could avoid that eventuality.

The PM will ask EU leaders to rule out any further Brexit delay if a deal is agreed – forcing MPs to finally choose between laving with a deal and leaving without one.

But they warned that negotiations had been damaged by the so-called ‘Surrender Act’ legislation which his designed to force Mr Johnson to seek a delay if he cannot get a deal.

In his letter to Mr Juncker, the PM says the Government cannot accept the backstop negotiated by Theresa May, which would have kept the whole UK in the customs union indefinitely.

He says the backstop would have acted as a ‘bridge’ to a future relationship in which the UK would have remained ‘closely integrated with EU customs arrangements.’

But with the government now seeking a much looser free trade agreement, he says the backstop would be ‘a bridge to nowhere,’ adding: ‘A new way forward must be found.’

No 10 sources also said Mr Johnson would never accept the EU’s alternative plan for a Northern Ireland-only backstop, even if it was time-limited.

Mr Johnson says the deal could result in Northern Ireland remaining aligned to EU rules ‘for a potentially prolonged period’, making it essential that the plan has the consent of the people of Northern Ireland.

However, Brussels is wary of any arrangement that could Northern Ireland’s Assembly a veto over the future of the EU’s only land border with the UK.

Earlier, Mr Johnson delivered a stark warning in his Tory conference speech that the only other option on the table is No Deal.

He said both sides wanted to move on, insisting he ‘loved’ Europe but there had to be a new relationship. He said ‘technical’ issues about how border checks should be carried out should not get in the way of an agreement.

But despite his upbeat tone Mr Johnson is facing a wall of resistance from the EU to his new proposals, which will be formally tabled shortly. Mr Johnson’s top negotiator David Frost is in the Belgian capital to hand over the draft legal text.

Mr Johnson admitted there would be change but denied there will be checks ‘at or near the border’, saying the government will respect the Good Friday Agreement. ‘I love Europe. But after 45 years of really dramatic constitutional change we must have a new relationship,’ he said.

The PM is due to hold a blizzard of calls with European leaders after his backstop proposals have been published.

But Mr Varadkar said today that what he had seen already did not seem like the ‘basis for an agreement’.

“What I can say is from the leaks, its not promising, and does not appear to form the basis for an agreement but we’ll keep talking but I’d want to see them in writing first,’ he told reporters in Dublin.

“I hope to speak to the Prime Minister later this evening.

“I expect him to talk me through the proposals, and for me to ask him to listen to the voice of the people of Northern Ireland. 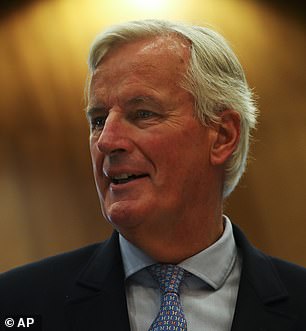 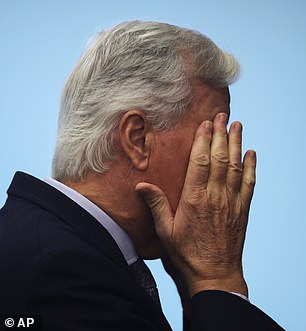 He added: “No one on the island of Ireland wants checks at the border, why would any British government want to force that on Irish people, north and south?

“It’s much more than technical, it’s deeply political, legal, and the technical aspects are a small part of that.”

However, he said he still believes the PM wants a deal.

EU diplomats have accused Mr Johnson of adopting ‘kamikaze’ tactics, and said the chances of a deal emerging now appeared to be ‘zero’.

However, DUP leader Arlene Foster urged Brussels to take the ideas seriously, saying the backstop had always been the ‘big stumbling block’ and needed to be ‘fixed’.

In his speech today, Mr Johnson said the UK would be tabling ‘constructive and reasonable proposals which provide a compromise for both sides’.

‘We will under no circumstances have checks at or near the border in Northern Ireland,’ he said.

‘We will respect the peace process and the Good Friday agreement. And by a process of renewable democratic consent by the executive and assembly of Northern Ireland we will go further and protect the existing regulatory arrangements for farmers and other businesses on both sides of the border.

‘At the same time we will allow the UK – whole and entire – to withdraw from the EU, with control of our own trade policy from the start, and to protect the union.

‘Yes, this is a compromise by the UK. And I hope very much that our friends understand that and compromise in their turn.

‘Because if we fail to get an agreement because of what is essentially a technical discussion of the exact nature of future customs checks, when that technology is improving the whole time – then let us be in no doubt that the alternative is no deal.

‘But let me tell you this conference it is an outcome for which we are ready.’