Boris Johnson dramatically won his battle for a pre-Christmas election today as Jeremy Corbyn caved in.

The Labour leader told the shadow cabinet this morning that his test of ruling out No Deal has now been met – despite claiming the opposite last night.

Mr Corbyn told his team: ‘We have now heard from the EU that the extension of Article 50 to 31st January has been confirmed, so for the next three months, our condition of taking No Deal off the table has now been met.

‘We will now launch the most ambitious and radical campaign for real change our country has ever seen.’

A senior Labour source said the party is now ‘supporting a December election’.

The move came after the Prime Minister mounted a fourth effort to force a snap poll.

Why are the parties wrangling over the date of the election?

A short piece of legislation is being put before MPs this afternoon that would trigger an election on December 12 – although the date is still being wrangled over.

Boris Johnson has already met the main demands of the SNP and Lib Dems by accepting that his Brexit deal will be shelved until after an election.

However, the smaller parties want the date to be December 9.

They are concerned that leaving it later would mean many university students have gone home – and might not be registered in the right place to vote.

They are also nervous that Mr Johnson might do a U-turn and decide to try to bring back the Bill.

A No10 source floated a compromise this morning, suggesting December 11.

But ministers have said the earlier timetable is not possible as the Bill must go through by the end of Thursday, and other laws need to be passed for Northern Ireland.

A short piece of legislation is being put before MPs this afternoon that would trigger the vote on December 12 – although the date is still being wrangled over.

Previously Mr Johnson has tried to force an election by tabling a motion under the Fixed-term Parliaments Act, which requires a two-thirds majority in the Commons.

That threshold can only be met if Mr Corbyn agrees, and he vetoed the step last night.

But the latest tactic only requires a simple majority, and there were fears SNP and Lib Dem support meant Labour was about to be humiliatingly outflanked.

Mr Johnson has already met the main demands of the smaller parties by accepting that his Brexit deal will be shelved until after an election.

But they are arguing the date should be December 9 rather than 12, with the issue likely to be the subject of a row in the Commons later.

A No10 source floated a compromise this morning, suggesting December 11.

But ministers are adamant the earlier timetable is not possible as the Bill must go through by the end of Thursday, and other laws need to be passed for Northern Ireland.

Earlier,  Lib Dem MP Chuka Umunna also hinted at a deal by saying while the date could not be December 12, there was room for manoeuvre.

‘We will see what else they come forward with. We have got to break the gridlock,’ he told BBC Radio 4’s Today programme. 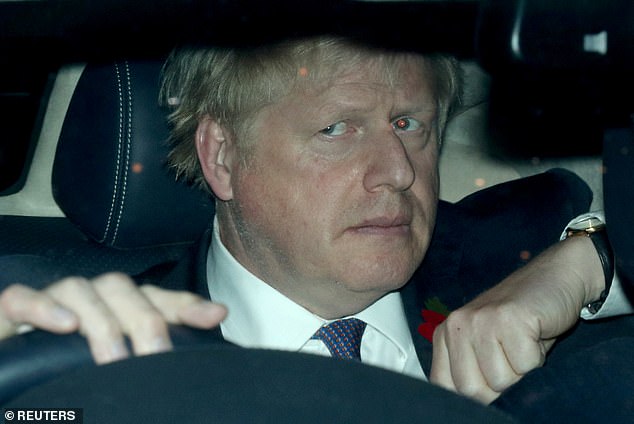 Boris Johnson (pictured in Westminster last night) has said he does not want to put the public to the ‘inconvenience’ of a pre-Christmas election, but Parliament cannot ‘deliver’ 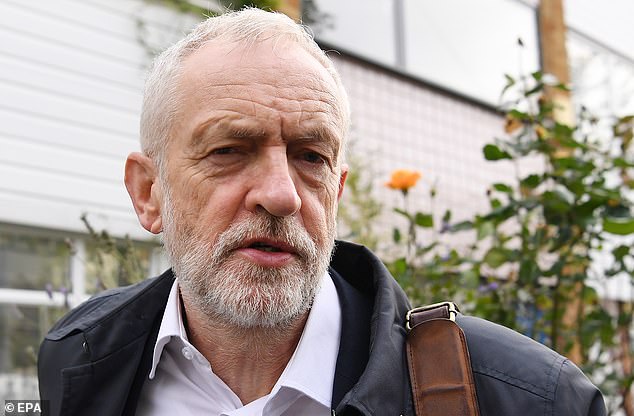 The abrupt climbdown by Mr Corbyn came amid mounting signs of panic in Labour that they would be outflanked on the election.

The veteran left-winger and his closest aides have been keen to trigger a showdown ballot.

Initially the Labour leader claimed that the party would support an early vote if the EU granted an extension to January 31 – as happened yesterday.

What happened in Parliament yesterday?

Boris Johnson, the SNP and the Lib Dems have been trying to put together an unlikely alliance to render Jeremy Corbyn powerless.

In the face of a massive backbench revolt, Mr Corbyn blocked the PM’s latest bid to force a snap poll last night.

That motion was brought under the Fixed Term Parliaments Act, meaning two-thirds of the Commons must vote in favour for it to pass.

But the veteran left-winger is at risk of being outflanked after the SNP and Lib Dems broke ranks.

They have offered to back a one-line Bill that would sidestep the FTPA. In return the PM would give up hope of passing the Brexit Bill before an election.

However, the date could be a major sticking point, as Mr Johnson wants December 12 and the other parties are demanding December 9.

However, he later raised the bar to insist that Mr Johnson must rule out No Deal ever happening.

The PM has not done so.

Following his volte face, Mr Corbyn faces a massive revolt by half his MPs, who fear being put to the sword by the Tories and Lib Dems, and would rather have a second Brexit referendum.

But assuming a date can be found the numbers in Parliament look overwhelming.

Shadow international trade secretary Barry Gardiner had suggested earlier today that Labour could be about to make a dramatic U-turn.

Asked what Mr Johnson could do to get Labour support, he said: ‘The first thing, I think, would be to ensure that students are not going to be disenfranchised by the date of the election.’

Pressed on whether December 9 would be more acceptable than December 12, Mr Gardiner said: ‘It certainly would.’

Lib Dem leader Jo Swinson declined to say last night whether her 19 MPs would support Mr Johnson this afternoon but pointed out she had rejected December 12.

Government sources said it was too late to meet the Lib Dems’ preferred date of December 9 – but indicated that the two following days were possible compromise options.

In the Commons, Mr Johnson said: ‘We will not allow this paralysis to continue. This House can no longer keep the country hostage. Millions of families and businesses cannot plan for the future.’

The PM accused Mr Corbyn of ‘literally and figuratively running away from the judgment of the British people’. 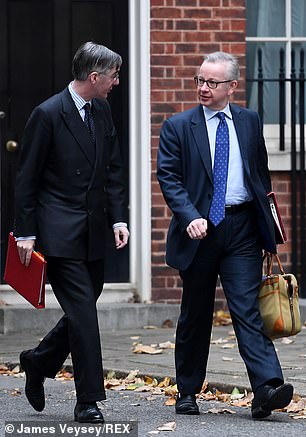 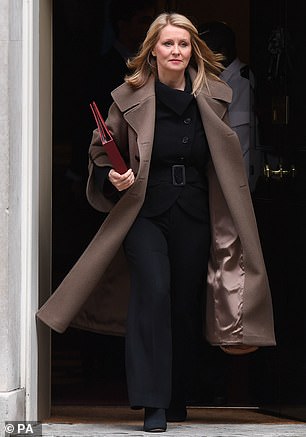 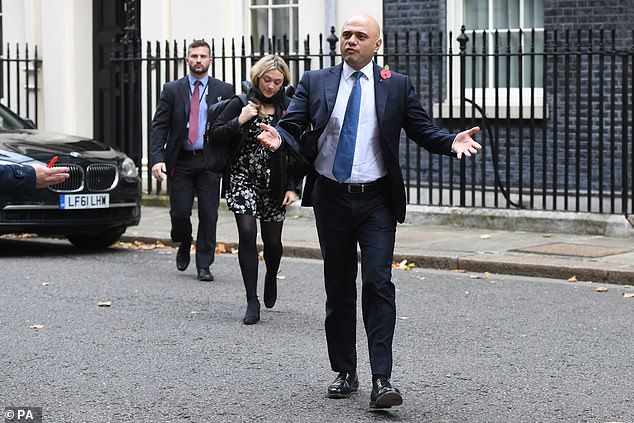 Mr Johnson is unable to simply call an election because of the conditions of the Fixed-Term Parliaments Act, which state that the next election should not be held until June 2022.

The legislation, passed by the coalition government, allows for an early election only if two thirds of MPs back the idea in a Commons vote.

Why is there a dispute over whether the election should be on December 9 or 12?

The fate of Boris Johnson’s second general election vote on Tuesday largely depends on whether he can come to a compromise with the SNP and Lib Dems over when the poll would be held.

A full 25 working days is needed between Parliament dissolving and an election, so Number 10 insists a December 9 date isn’t possible.

However, Lib Dem leader Jo Swinson is worried Mr Johnson could use the later date to try and bring his Brexit Bill back and rush it through before polling day. The PM has rejected these concerns, saying the bill is dead until after an election.

There has also been a suggestion that the Lib Dems and Labour would prefer an earlier poll because more students would be at university, potentially handing them an advantage. However, the fact is that many major universities finish for Christmas on Friday, December 13.

Cabinet Secretary Mark Sedwill has warned that December 12 is the latest possible date for an election or it would mean Christmas events at village halls and schools being cancelled to make way for polling stations.

But last night, for the third time in recent months, Mr Corbyn ordered his Labour MPs to abstain. As a result, the vote was won by 299 votes to 70 – well short of the 434 votes needed to secure an early poll.

Mr Johnson said the Government would now press ahead with a ‘simple Bill’ that sets aside the Fixed-Term Parliaments Act and states that the next election should be held on December 12.

The idea was first floated at the weekend – with a date of December 9 – by the Lib Dems and SNP, who both see an electoral advantage in going to the polls before Brexit is delivered.

Tonight Tory chief whip Mark Spencer was leading intensive talks with his counterparts in the two minor parties in the hope of stitching together a compromise that would deliver a pre-Christmas election.

Government sources said it was all-but impossible to get the legislation through in time for an election on December 9 as this would require Parliament to be dissolved on Thursday night.

Sources said MPs also had to pass Northern Ireland budget legislation before an election could be held.

Mr Corbyn suggested parts of the country would be too dark in the evening to hold an election on December 12.

He later appeared to hint he could drop his opposition if the poll was held a few days earlier.

But Labour transport spokesman Andy McDonald tonight suggested his party was unlikely to change its position and back the Government.

‘I think it’s very unwise to be having a general election in the run-up to Christmas,’ he said. 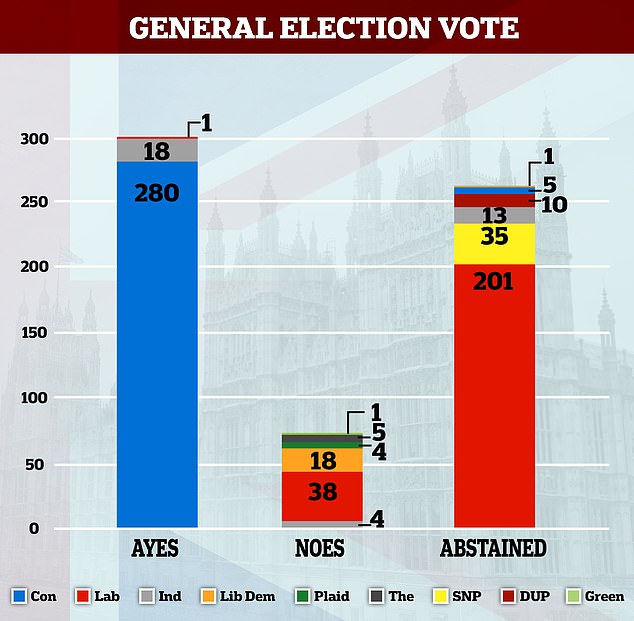 A breakdown showing how MPs voted last night. It shows that the Lib Dems opposed the vote, while the SNP and Labour abstained

Mr Johnson’s allies are determined to secure a pre-Christmas election, believing it is the only way to break the Brexit deadlock. The Prime Minister told MPs: ‘Across the country there is a widespread view that this Parliament has run its course.

‘I simply do not believe that this House is capable of delivering on the priorities of the people, whether that means Brexit or anything else.’ However, some senior Tories such as Northern Ireland Secretary Julian Smith, Culture Secretary Nicky Morgan and Health Secretary Matt Hancock have argued it would be better to try to pass the PM’s Brexit deal before going to the polls.

Damian Green, leader of the One Nation group of Tory MPs, urged Mr Johnson to press on with trying to get the withdrawal agreement through Parliament rather than gambling with an election. Mr Green said: ‘It’s much better for us to have an election after the Withdrawal Agreement Bill is passed. Any other course of action is incredibly risky.’

Fellow Tory Matthew Offord warned an amendment to give 16- and 17-year-olds the vote was ‘inevitable’ as ‘it’s the only way Labour could save themselves’. The SNP, which last week described the idea of a December election as ‘barking mad’, has indicated it could now back an early poll.

However the party’s Westminster leader Ian Blackford last night indicated that he would push for 16-year-olds to be given the vote – a red line for No 10. 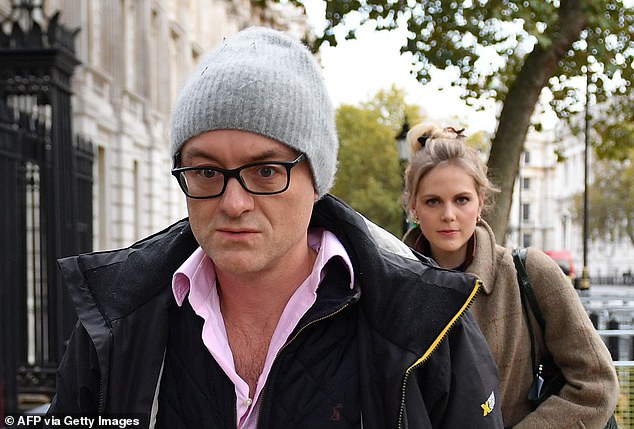 He said: ‘We would be better having a referendum than an election, which can gift one side victory with 35 per cent of the vote. We have currently got him in a cage.

‘He is going to be an escaped vulture fairly soon, when he will give you any Brexit, or a No Deal Brexit or anything you want and claim a mandate for it.’

Former Cabinet minister David Gauke, one of 21 Tory MPs suspended for opposing No Deal, also cautioned about a December election, saying: ‘When someone opens the front door to a stranger in December they expect to be sung a carol, not asked how they are going to vote.’

He said it had to be clear that the Government could not force through a No Deal Brexit against the wishes of Parliament. ‘We look forward to a clear, definitive decision that no deal is absolutely off the table and there is no danger of this Prime Minister not sticking to his word because he has some form on these matters,’ he added.