Philip Hammond said the ‘bidding war’ between the rivals jostling for the Tory crown risked burdening future generations with billions more in debt.

And as both candidates hardened their rhetoric on No Deal, the Chancellor said leaving the EU without an agreement would wipe out ‘all’ of the £26billion he had set aside for a rainy day.

‘My concern is this Government has built up a reputation for fiscal responsibility and the British people have worked incredibly hard over a decade to rebuild our public finances and I think it’s very important we don’t throw that away,’ he told the BBC.

‘Whether it’s a leadership competition or a general election, there’s always a temptation to get into a bidding war about spending more and cutting taxes – but you can’t do both.’ 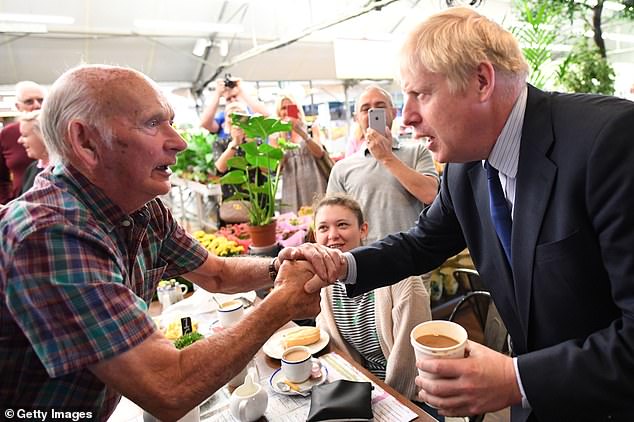 His intervention came as parliamentary efforts to prevent No Deal collapsed for the second time in a month, raising questions about whether MPs would be able to prevent a new prime minister taking Britain out without an agreement this autumn.

Mr Hunt, who has been under pressure to match his rival on Brexit, yesterday dramatically toughened his stance, saying he would begin to implement plans for No Deal by September 30 unless the EU agreed immediate concessions. It came as:

– International Trade Secretary Liam Fox warned that a No Deal Brexit would cause ‘real threats’ to the Union;

– Commons Speaker John Bercow refused to allow a vote on a controversial plan to stop No Deal, led by former attorney general Dominic Grieve, which would have seen MPs cut off funding for schools;

– Mr Johnson vowed to end the hounding of ex-service personnel, saying it was ‘totally unfair’ that cases were being reopened against veterans without new evidence; 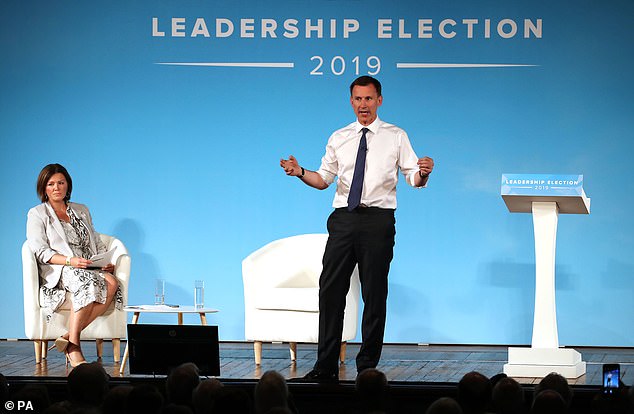 – Mr Hunt warned that plans to tackle Britain’s social care crisis might have to be delayed again in the event of a No Deal Brexit as cash was diverted to help struggling businesses;

– Mr Johnson played down claims from ally Matt Hancock that he is preparing to offer an inflation-busting pay rise to millions of public sector workers;

PROMISES THAT KEEP ON COMING

Both leadership candidates have made a string of tax and spending commitments. We itemise what they pledged – and how much it will cost.

Raise National Insurance threshold from starting point of £8,632 a year. Bringing it in line with £12,500 income tax threshold would give most workers a £464 tax cut.

Reverse real-terms cuts to school budgets by 2022, lifting funding per pupil to £4,000 for primary and £5,000 for secondary, and expand special needs free schools.

Every home to have super-fast broadband access by 2025 instead of 2033.

20,000 new police recruits to take numbers back to level before cuts kicked in.

‘Believe me, there is money available,’ Boris said this weekend, summarising his approach to – or lack of – fiscal discipline. Allies say he will use Hammond’s £26billion Brexit war chest. But how much will be left if he pushes through No Deal?

The Foreign Secretary warned he would cancel all civil service leave over the summer in order to prepare for No Deal – sparking an immediate backlash from Whitehall trade unions. Setting out a detailed ten-point plan for coping with No Deal, he said he would set aside only a three-week negotiating window in September to establish whether the EU was serious about striking an acceptable agreement.

Mr Hunt said No Deal was ‘obviously not my preferred destination’. But he added: ‘I want to be crystal-clear with members, with my parliamentary colleagues, and with the European Union.

‘If there is no engagement on this deal, if it is apparent that the European Commission is simply not interested in negotiating, if there is no willingness to tackle the shortcomings of (the) backstop, then… we will intensify and finalise our preparations to leave without a deal.’

But Mr Hunt refused to set a hard deadline for leaving, saying it would be wrong to abandon talks if they were close to agreement.

Sources on Mr Johnson’s campaign last night said his reluctance to set a firm exit date showed his plans were nothing more than ‘papier-mache’.

Mr Hammond last night sounded the alarm over the lavish spending plans of both main candidates.

He urged them both to ‘stop and think’ instead of making unfunded pledges that would require billions more in borrowing.

Asked about the Chancellor’s comments, Mr Hunt said: ‘What Philip Hammond was talking about is that the headroom he has built up and is jealously guarding at the moment is headroom that is there to deal with the eventuality of a No Deal Brexit.

‘I have been explicit that some of my other spending plans, such as more money for education – which I passionately want to do – we wouldn’t any longer be able to do immediately in a No Deal scenario, because the priority would be to support businesses directly affected by a dramatic change in our economic circumstances.’

In May, Mr Hunt described No Deal as ‘political suicide’. But former Tory treasurer Lord Ashcroft said he had little choice but to embrace it, given the Eurosceptic views of the 160,000 Conservative members deciding the leadership contest. He said: ‘The harder Jeremy Hunt positions himself on Brexit, the more party voters will leak from Boris Johnson.’

Mr Johnson has pledged to leave the EU by October 31 ‘come what may, do or die’

The term 'Anglo-Saxon' should be DROPPED from modern speech, says scholar
FIFTY people with Down's syndrome star in adorable video miming to Queen's 'Don't Stop Me Now'
Robbie Williams discusses Coleen Rooney's 'dangerous need for revenge' on Rebekah Vardy amid WAG war
Celebrity make up artist reveals how to contour like the stars
Little Mix's Perrie Edwards gazes at beau Alex Oxlade-Chamberlain as they leave X Factor
Cohen predicts that a Trump loss in 2020 would not lead to a peaceful transition of power
Amazing scenes including wild horses thundering through France steal the show in photo exhibition
James Stunt borrows £6m on Mayfair home and 'pawns' artwork in dramatic money making move