Two men had a fist fight, and one was thrown over a wall, in the middle of the street as families were doing their weekend shopping.

One is kneed in the head while the second is pulled to the floor on North Road, Durham, as they are surrounded by at least ten friends during the daytime brawl last Saturday.

Social media users have condemned the two men as ‘b***ends’ and said they should have ‘more sense’ than to brawl in the street. 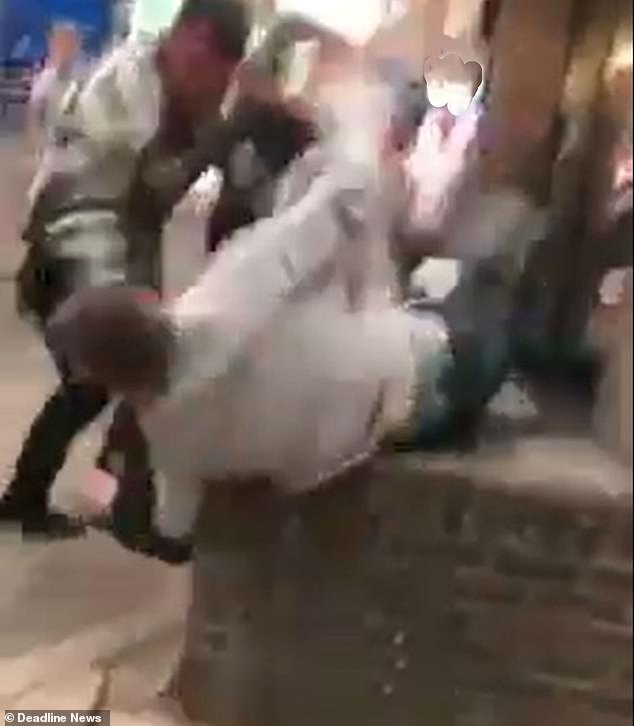 The video shows a man in black punching the head of a man in a grey jacket, who is punching his stomach.

Surrounded by a group of at least ten men, the man in black then falls to the floor, and his attacker leaps on top and keeps hitting him. He then rips off the black item of clothing and they fall back into the middle of the street.

The man in a grey jacket then grabs the other by the collar and hurls him over a low-rise brick wall.

Viewers have reacted with rage at the video, which has already been viewed 86,000 times. 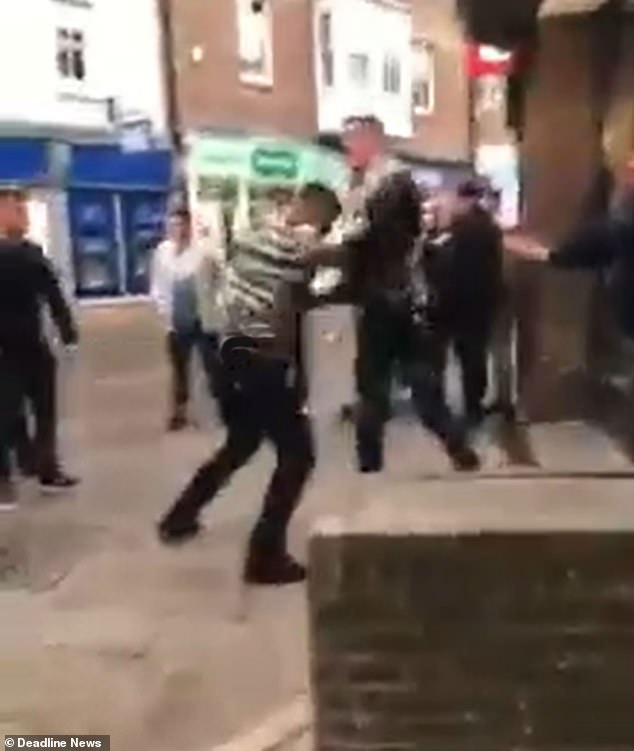 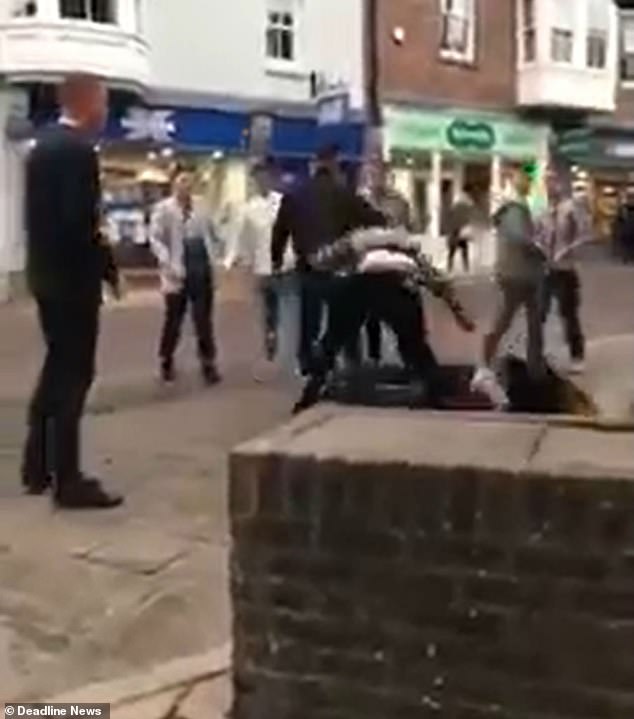 Social media users have condemned the behaviour as ‘not on’, saying the men ‘should have had more sense’

Jane Carmedy wrote: ‘I bet the families walking by were delighted.’

Dave Cee said: ‘Absolute bunch of b***ends. Middle of Durham? Families out shopping and you see that going on?’

Claire Leckenby said: ‘It’s not on where families are. They should have more sense but no. Had a few shandies and wanna have a scrap.’

Damian Feldman said: ‘Broad daylight in the town centre? Only c***s behave like that.’

MailOnline have contacted Durham Police about the fight.

The video was uploaded by bare knuckle boxer James McCrory, from Newcastle, with the caption, ‘Idiots in Durham today. Can’t handle the drink boys. Don’t play out.’

He has competed in over 150 boxing contests so far, where two people fight each other without wearing boxing gloves.

North Road is popular with Durham visitors who walk through it when going between the bustling town centre and the bus or train station.

North Road in Durham is a main thoroughfare for visitors to the city, who use it to get between the town centre and the bus or train station

Primary school principal goes viral for leading pupils through amazing morning dance routine
Why 42 is NOT the answer to life, the universe and everything
Lion-tiger hybrid weighing 705lbs is bred in South Carolina
High school band criticized for 'insensitive' performance depicting cops held at gunpoint
How a lustful 18th century lord fathered 43 children with at least nine mistresses
Uncle dashes out of his house STARK NAKED to chase 'van driver abducting his niece'
Woman sets out bizarre list of 'ground rules' for Las Vegas bachelorette party
'Desperate' migrants are charged with hijacking merchant ship off Libya