Tourists had their holiday ruined within minutes of arriving in Britain after they were targeted by brazen thieves who swiped their bag in an airport.

A thieving couple distracted holidaymakers in a phone shop in Heathrow Airport before escaping in a getaway car with money, jewellery and passports.

CCTV footage shows Daniel Kennedy, 54, and Denise Blackburn, 45, of Southwark, laughing at their targets, who had just landed on a flight from Ghana, before hatching a plan.

When the victims turn their backs to the luggage trolley, the pair make a move to swipe their bags. 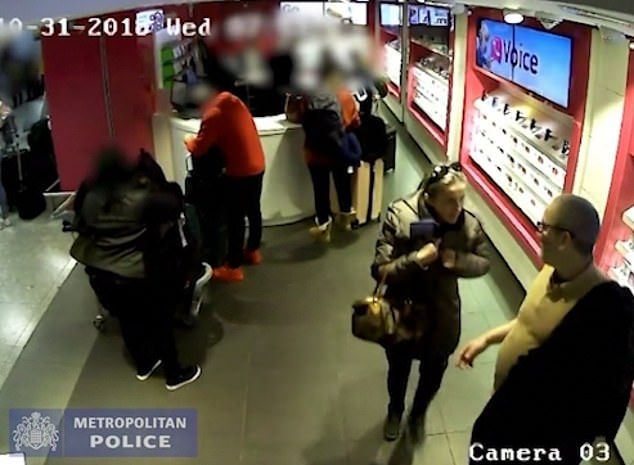 Blackburn slowly wanders over to stand next to one of the victims at the shop counter and blocks his view of the luggage.

Meanwhile Kennedy holds his jacket to cover his arm as he quickly brushes past the trolley before grabbing a handbag which he stuffs away.

The thieves then rush to leave the shop with the valuable belongings, including cash and an expensive watch.

Once the the victims realised their bag was missing, they reported it to the police who quickly set about tracing the thieves.

Police officers trawled through CCTV from the airport to track the criminals and were able to find them within 48 hours.

Officers discovered they had tried to throw off the scent by driving into the airport carpark before their son Ryan Kennedy, 19, drove them out while they hid in the back covered with a jacket. 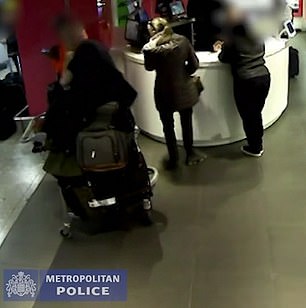 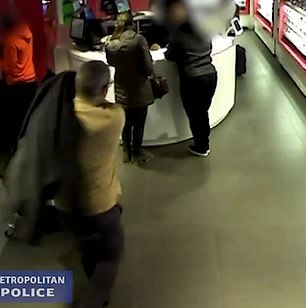 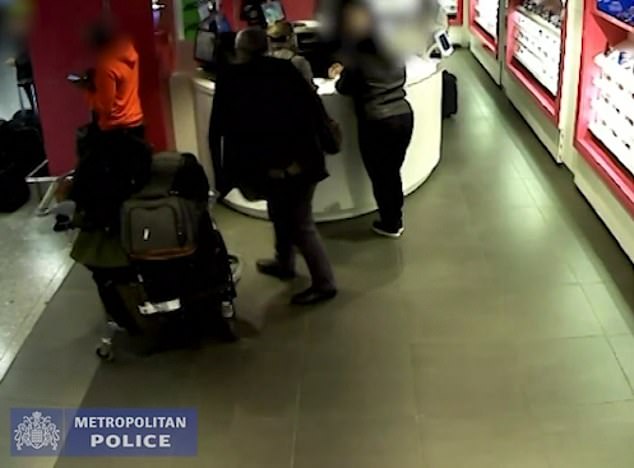 The thieves rush to leave the shop with the valuable belongings, including cash and an expensive watch

Police went to the home of the couple to arrest them and found money, an Armani watch – which Blackburn was wearing – and a quantity of cannabis.

All three pleaded guilty to the offences against them at Isleworth Crown Court on Monday.

Daniel Kennedy was jailed for two years and eight months for theft, driving otherwise in accordance with a license and driving with no insurance. He is also disqualified from driving for 16 months.

Blackburn was sentenced to 12 months’ imprisonment, suspended for two years, for theft and possession of cannabis.

Ryan Kennedy was conditionally discharged for 12 months and has been banned from driving for a year, for driving while disqualified, driving with no insurance and possession of cannabis.

DCI Sharon Brookes, of the Aviation Policing Command, said: ‘I am pleased that my team were able to return some of the stolen items to the victims.

‘The Met Police is determined to keep people flying in and out of the UK safe from opportunists like Blackburn and Daniel Kennedy.

‘The victims sent a message of thanks to PC Houston for his work and I was delighted to read that, subsequently, they will continue to holiday in the UK.’

Metropolitan Police said: ‘The footage is a reminder to keep luggage within sight and reach because, in the blink of an eye, it can disappear.

‘It’s easy to be distracted at an airport as our minds are often on other things, and luggage is cumbersome to carry around, but the benefits of keeping your eyes on your bags far outweigh the distress and disruption caused by them being stolen.

‘In this case, the stolen bag contained a large quantity of money, jewellery and both victims’ passports.’