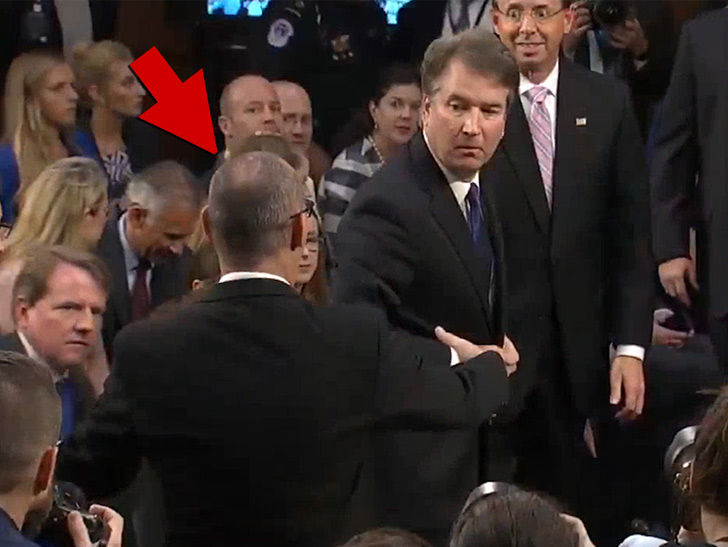 Brett Kavanaugh was in no mood to meet a father whose kid was killed during the Parkland shooting — snubbing his handshake attempt during a SCOTUS confirmation hearing.

Judge Kavanaugh’s morning session in front of the Senate Judiciary Committee on Capitol Hill was put on pause Tuesday, and as Trump’s pick for the Supreme Court was getting up to leave … Fred Guttenberg approached him out of nowhere with his hand extended.

Brett Kavanaugh, a potential Supreme Court justice, refused to shake the hand of @fred_guttenberg, whose daughter Jaime was murdered in her high school in Parkland, Florida. Remember that the @NRA spent $30M to elect Trump who would, in turn, appoint Kavanaugh.

He’s the father of Jamie Guttenberg, one of the 17 killed earlier this year in the mass shooting at Stoneman Douglas High School. Rather than engage Fred, however, Kavanaugh shot him a confused look and turned away … refusing to talk to the guy.

Just walked up to Judge Kavanaugh as morning session ended. Put out my hand to introduce myself as Jaime Guttenberg’s dad. He pulled his hand back, turned his back to me and walked away. I guess he did not want to deal with the reality of gun violence. — Fred Guttenberg (@fred_guttenberg) September 4, 2018

Fred addressed the awkward situation on social media, saying Kavanaugh apparently didn’t want to “deal with the reality of gun violence.” Fred’s been incredibly outspoken about enacting more effective gun control in the wake of the shooting.

Kavanaugh is said to be a strong advocate of the 2nd Amendment, and many worry his appointment to the highest court in the land could derail any effort for changing gun laws nationally.