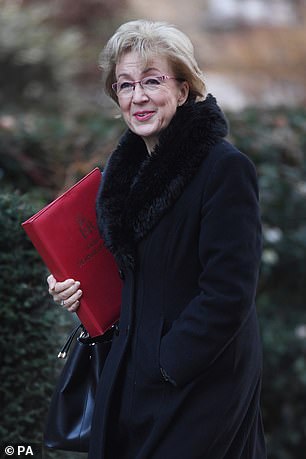 The Brexit date might need to be extended beyond the end of March even if Theresa May gets a deal passed, a Cabinet minister admitted today.

Andrea Leadsom said the UK’s departure could be put off for a ‘couple of extra weeks’ so legislation can go through Parliament.

But she insisted the Article 50 process should not be extended beyond March 29 if there is no agreement reached with the EU.

There has been mounting speculation at Westminster that a delay will be needed to implement a deal.

However, Mrs May has repeatedly stated that the UK will be leaving the bloc on schedule.

A handful of Bills, including the Withdrawal Agreement Implementation Bill, need to make it through Parliament before the Article 50 process comes to an end.

Speaking to the BBC’s Newsnight, Mrs Leadsom said the EU would allow the UK more time to pass laws if it was needed.

‘We can get the legislation through,’ she said.

‘In spite of everything we have a very strong relationship with our EU friends and neighbours.

‘I am absolutely certain that if we needed a couple of extra weeks or something that that would be feasible.’

But Mrs Leadsom also stressed that the UK would leave on time if there is no deal agreed.

‘The legal default is we leave the EU on 29 March without a deal unless there is a deal is in place,’ she said.

‘That has not changed. That is the Prime Minister’s view and that’s my view.

‘Of course it is also very important that we continue to prepare for all eventualities because we do need to make sure that in all circumstances the UK can continue to thrive and do well in a post EU environment.

‘I do encourage my colleagues in Cabinet to get behind that sentiment and to make sure that we are all on the same page. We are now in the really final days.’

Ms Leadsom also accused the EU of failing to understand the anger in the UK over the Irish border backstop.

‘Keeping the UK in an unlimited, in time terms, backstop that we can’t unilaterally exit from under any circumstances is a real problem for many,’ she said.

‘The EU needs to be listening very carefully to that. They are slightly in denial saying that that is not the issue. 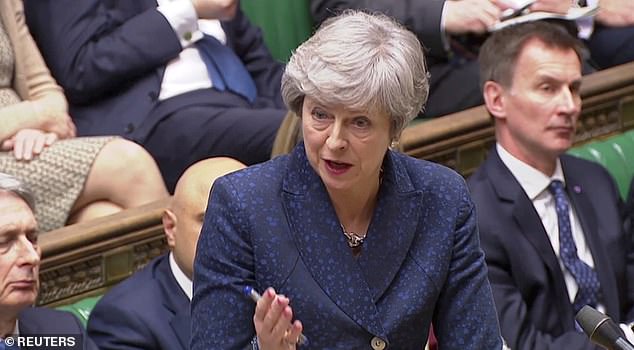 Second homeless man dies in the shadow of Parliament in 10 months
Hundreds of thousands of anti-Trump protesters gather in London
Revellers snub coronavirus threat to cram onto rides at Chessington
Ed Sheeran's wildlife pond is just a posh swimming pool, say furious locals
Customers 'exploited' by phone, insurance and mortgage companies
Labor, Shorten slide in latest Newspoll
Bank of England should NOT choose white scientist for new $50 note
Grief-stricken mother shares her anger after the paramedic is allowed to keep her job