This is the hilarious moment an anti-Brexit protester photobombed a BBC News interview and played cat and mouse with producers who tried their best to crop him out.

Brexit expert Georgina Wright was talking with presenter Annita McVeigh outside the Houses of Parliament this morning when regular EU demonstrator Steve Bray spied an opportunity for air time.

Armed with two double-sided signs with slogans like ‘save the NHS‘ and ‘stop the Brexit mess’, the 49-year-old took a prime position in front of their cameras. 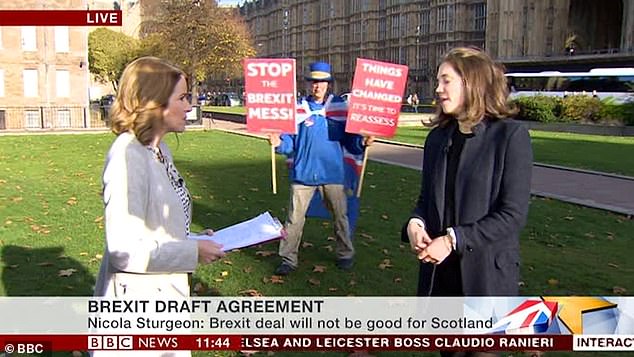 With Mr Bray polluting the shot with his Union flag cape and ‘stop Brexit’ top hat, the director decided to switch to a close-up of Wright – an attempt to crop the protester out.

But the quick-thinking demonstrator sneaked into the new shot by creeping behind Wright’s shoulder.

The producers then tried a second time to switch to a different camera and freeze him out.

But the campaigner continued to stalk the camera and reposition himself to be clearly in shot during a game of cat and mouse that lasted almost two minutes. 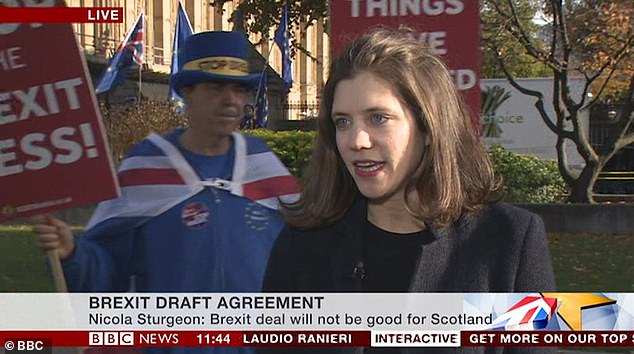 The Welshman, from Port Talbot said he could see which camera the BBC was using on a monitor and shifted positions to be in each shot.

The father-of-one said he’s had death threats after delivering his pro-Remain message on TV ‘hundreds of times’.

He said: ‘I’ve had a few threats on my life, things like that. It’s in one ear, out the other with me. 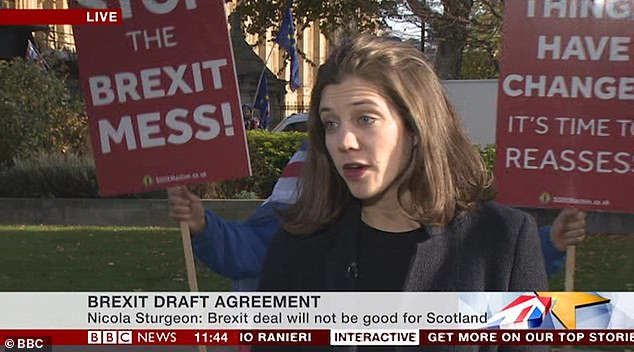 ‘I have to be careful. They do call the police, and the police just remove me.

‘So, I’ve learnt from that. I just go in quick, do a little bit, get off. Keep going back and forth. It’s part of the protest. It’s getting the message out there.

‘I do this for my daughter and my grandson. For the future. If Brexit happens, we will be in years of decline.’