The Bishop’s Wife (U)

Two years ago this month a couple of films came out that wildly surpassed commercial expectations.

One was The Greatest Showman, which confounded lacklustre reviews (including mine) to become a spectacular hit.

The other was Jumanji: Welcome To The Jungle, a funny, exuberant ‘reimagining’ of a 1995 Robin Williams film. Amazingly, its global box-office take isn’t far short of a billion dollars. 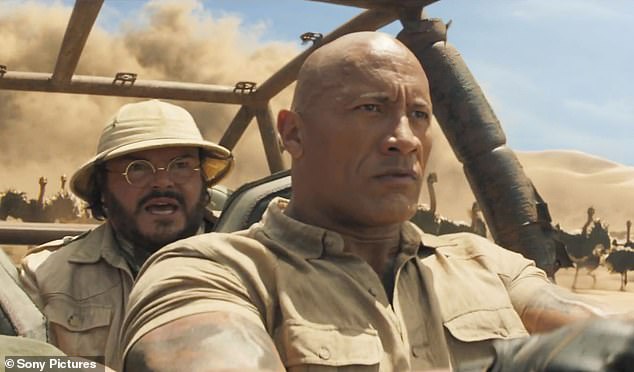 Our avatar heroes must traverse inhospitable deserts populated by rampaging ostriches, cross ravines on rickety rope bridges while fighting off an army of hostile mandrills, and scale vast walls made of ice on their way to a mountain-top fortress if they are to steal a gleaming, magical jewel

Now we have the inevitable sequel, Jumanji: The Next Level. It’s fun, but not such unexpected fun, which was a significant part of the treat last time around.

Nonetheless, it does the festive equivalent of ticking all the boxes — peels all the tangerines, perhaps — for anyone planning a family outing to the cinema this Christmas.

In the 2017 film, four teenagers found themselves sucked into a video game called Jumanji, reappearing as adult characters stuck in a perilous jungle.

There, in their Indiana Jones-type quest for a precious jewel, and with a fiendish baddie to outwit, they each had three lives. But the comedy sprang from the avatars they inhabited —strikingly different from their small-town human selves. 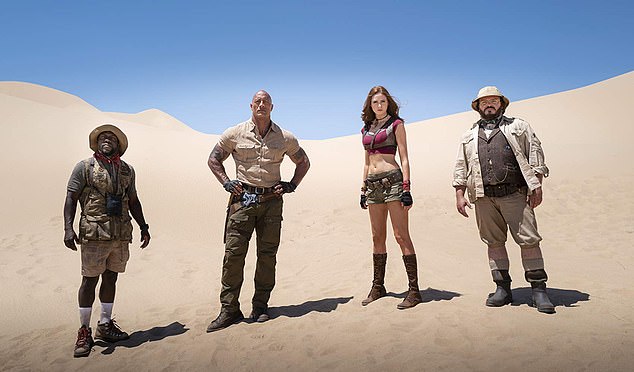 The quartet (all played by the same actors) have reached college age, but Spencer isn’t really enjoying life at university in New York, not least because he’s broken up with his home-town girlfriend Martha (Morgan Turner)

If I had to choose my 20 favourite lines of dialogue of the decade about to close, one of them would be Oberon/Bethany saying, in wonderment: ‘I feel like ever since I lost my phone, my other senses have kind of heightened…!’

The comedy this time isn’t quite as joyous, but otherwise director Jake Kasdan and his co-writers have stuck with pretty much the same winning formula as before.

The quartet (all played by the same actors) have reached college age, but Spencer isn’t really enjoying life at university in New York, not least because he’s broken up with his home-town girlfriend Martha (Morgan Turner). And he doesn’t look like Dr Bravestone any more.

At home for the Christmas holidays, where he is forced to share his bedroom with his cantankerous Grandpa Eddie (Danny DeVito in sparklingly grumpy form), Spencer ventures down to the basement and starts tinkering with the old video-game console again.

Soon, a crackle of electricity has propelled him back into Jumanji’s parallel universe, from which his friends decide they must rescue him.

Only this time, a couple of oldies accidentally join the adventure: Grandpa Eddie and his estranged friend and former business partner Milo (Danny Glover).

The challenges are much the same as in the last film — the kind of nonsense that all gamers will recognise. 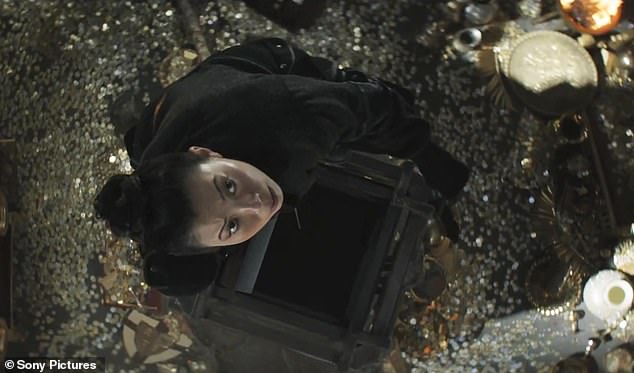 It does the festive equivalent of ticking all the boxes — peels all the tangerines, perhaps — for anyone planning a family outing to the cinema this Christmas

Our avatar heroes must traverse inhospitable deserts populated by rampaging ostriches, cross ravines on rickety rope bridges while fighting off an army of hostile mandrills, and scale vast walls made of ice on their way to a mountain-top fortress if they are to steal a gleaming, magical jewel from around the neck of fierce warlord Jurgen the Brutal (Rory McCann from Game Of Thrones, one of the few actors bigger than ‘The Rock’ Johnson).

But this time the body-swapping is even crazier, with diminutive Grandpa Eddie first materialising as enormous Dr Bravestone, and later as a new character, brilliant cat-burglar Ming Fleetfoot, played by the rapper Awkwafina.

Both she and Johnson do a fine job of channelling DeVito, although there’s some audacious scene-stealing by Kevin Hart as zoologist ‘Mouse’ Finbar, Milo’s avatar. He does a great Danny Glover impression, and gets most of the picture’s funniest lines.

If the last film was the best body-swap comedy since Big (1988), this one doesn’t quite scale the same heights.

But there are plenty of pleasures, and the obligatory moralising — with the Jumanji experience teaching them all to be better, more contented human beings on their return to reality — is nicely handled.

That existential journey is a Christmas-film staple, of course — perhaps best exemplified by It’s A Wonderful Life.

But the enduring popularity of Frank Capra’s 1946 classic has regrettably nudged aside The Bishop’s Wife, which came out the following year. Directed by Henry Koster, it had a similar storyline and just as much charm.

If you can find it, then check out this weekend’s re-release. Apart from anything else, it stars arguably the two most debonair stars from Hollywood’s golden age, and a pair of Brits to boot: Cary Grant and David Niven.

The former plays an angel called Dudley, sent to help Niven’s beleaguered bishop in his struggle to raise funds for a new cathedral.

In the process he is taught to value his marriage to lovely Julia (Loretta Young, one of the startling number of Hollywood beauties the irrepressible Niven is said to have bedded).

With the formidable Gladys Cooper and Elsa Lanchester in supporting roles, it’s a sweet, funny, captivating, altogether delightful picture, which too often gets omitted from lists of greatest-ever Christmas films.

Anyone who agrees with the great directors Martin Scorsese and Francis Ford Coppola that CGI-heavy superhero movies are destroying cinema can take heart from this list of English-language films I have loved most in 2019.

There’s not an Avenger nor a caped crusader in sight.

I think it’s been a terrific year for movies; and some of the best are foreign-language.

So let me give an honourable mention to the stunning Parasite (South Korea) and Pedro Almodovar’s Pain And Glory (Spain).

Here are some others that have moved, thrilled and delighted me…

When awards season gets under way, it will be impossible to overlook this dazzling film about the origins of Batman’s nemesis, stunningly played as a mentally-ill man by Joaquin Phoenix.

ONCE UPON A TIME IN HOLLYWOOD

Quentin Tarantino’s masterpiece will always be Pulp Fiction, but this, set in 1969 in the run-up to the Manson Family murders, runs it close. Leonardo DiCaprio, Brad Pitt and Margot Robbie all excel.

This has been a vintage year for female protagonists, and here’s a memorable one — a feckless Glaswegian ex-convict (Jessie Buckley) trying to make it as a country singer.

Scarlett Johansson and Adam Driver are both brilliant in Noah Baumbach’s bittersweet story of a couple embarking on a painful divorce.

Not everyone agrees, but for me this biopic of Elton John (Taron Egerton) was streets ahead of 2018’s Bohemian Rhapsody.

THIS terrific coming-of-age story about an awkward teenage girl (Elsie Fisher, superb) pulsates with tragi-comedy and at times is almost too painful to watch.

FIGHTING WITH MY FAMILY

Robert De Niro, Al Pacino, Joe Pesci and Harvey Keitel. Directed by Martin Scorsese. What more could we want from a movie about a mob enforcer? One of several Netflix films here.

Charlize Theron and Seth Rogen are certainly nobody’s idea of a romantic alliance, which is part, but by no means all, of what makes this rom-com so engaging.

Two of our greatest actors, Anthony Hopkins and Jonathan Pryce, are both on stupendous form in this clever drama imagining a series of encounters between Pope Benedict and his successor Pope Francis. It’s out on Netflix next Friday.

You don’t need to be a petrolhead to be carried along in the slipstream of this high-octane dramatisation, starring Christian Bale and Matt Damon, of how Ford seized the motor-racing laurels from Ferrari.

A compelling documentary about the 1969 moon landing, which has been pieced together from unseen footage only recently unearthed in the NASA archives. It’s absolutely mesmerising. 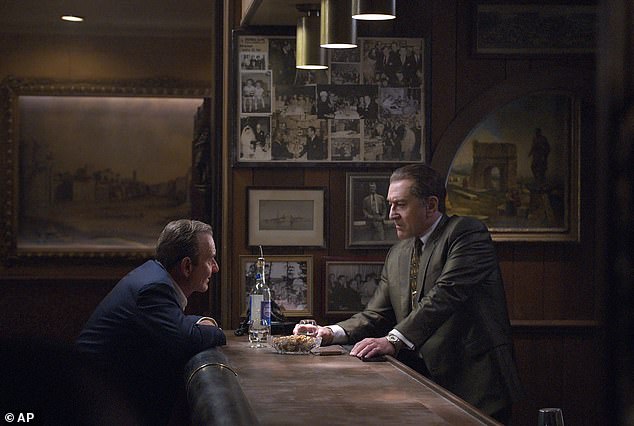 Robert De Niro, Al Pacino, Joe Pesci and Harvey Keitel star in The Irishman, above. Directed by Martin Scorsese. What more could we want from a movie about a mob enforcer? One of several Netflix films here

This has been the year of the music documentary, and this one is a humdinger — Sydney Pollack’s film, never seen until now because of technical issues, of Aretha Franklin recording her great gospel album Amazing Grace.

HITSVILLE: THE MAKING OF MOTOWN

You’ll be dancing in the street after watching this joyous telling of the Motown story in the company of the label’s founder Berry Gordy Jr, and the great Smokey Robinson.

Martin Scorsese takes a few liberties with the truth in this marvellous documentary homage to Bob Dylan, but it only enhances the experience.

The love and pain behind the most unlikely musical of all

Fiddler: A Miracle Of Miracles (12A)

Max Lewkowicz, the director of this fascinating, moving documentary about the making of Fiddler On The Roof, is the son of a Holocaust survivor.

So it’s no surprise that he wanted to tell the story of how a musical that focused on a Jewish family in Russia in 1905, forced to leave their home because of mounting anti-Semitism came about.

Yet in a way, as this film explains, the enduring popularity of both the 1971 film and the stage version (which has been performed somewhere in the world every single day since it opened in 1964) is down not to its Jewishness, but its universality.

The love and pain that spring from parenthood, children refusing to conform, dealing with prejudice, modernity clashing with tradition, the challenges to faith … these are all issues confronting all people, in all ages.

Once, when the show’s writer Joseph Stein, a New Yorker, went to see a performance in Japan, he was asked whether Americans even understood it, on the basis that it was ‘so Japanese’.

The documentary chronicles how Stein, with composer Jerry Bock and lyricist Sheldon Harnick, teamed up with the great director and choreographer Jerome Robbins to bring the show to the stage.

It explains the loathing between Robbins and leading man Zero Mostel (of The Producers fame), who played Tevye the milkman, and why, in the movie version, Mostel was overlooked in favour of a little-known Israeli actor, Chaim Topol.

For cinemas showing this, visit fiddlerfilm.co.uk