A list of strict ‘bridesmaid rules’ has sparked heated debate online after it was posted in a Wedding Shaming Facebook group.

Thought to originally have been written by a bride for her own bridal party, the ’12 Rules Every Bridesmaid Should Live By’ list has divided thousands; some believe it’s ‘rude’ while others think it’s ‘spot on’.

The list began by advising the bridal party to not only think of themselves as bridesmaids but also as a ‘therapist, personal shopper, secretary and straight up back-haver’.

‘Don’t complain about your bridesmaid dress unless the bride has complained about it first,’ the second read. 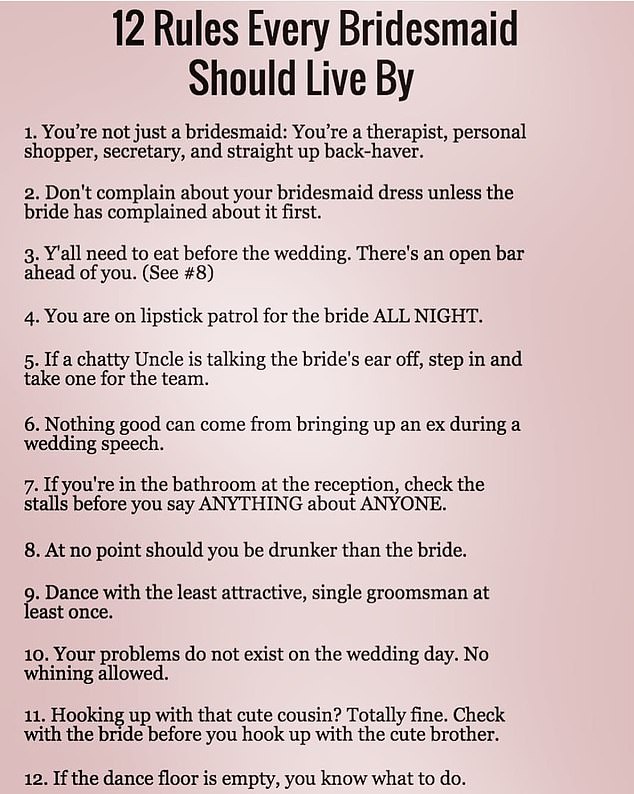 ‘You are on lipstick patrol for the bride ALL NIGHT,’ rule number four read, while five asked bridesmaids to intervene if a ‘chatty uncle’ is spotted with the bride.

Other standout rules demanded bridesmaids never get drunker than the bride, kiss the bride’s brother, complain about problems or gossip in a bathroom that is occupied by other guests.

‘If the dance floor is empty, you know what to do,’ the final point read.

The woman who shared the list of rules thought it was pointless and posed the question: ‘If you have to demand or tell your friends how to act, or how to be respectful, should they really be your bridesmaids.. or even your friends?’ 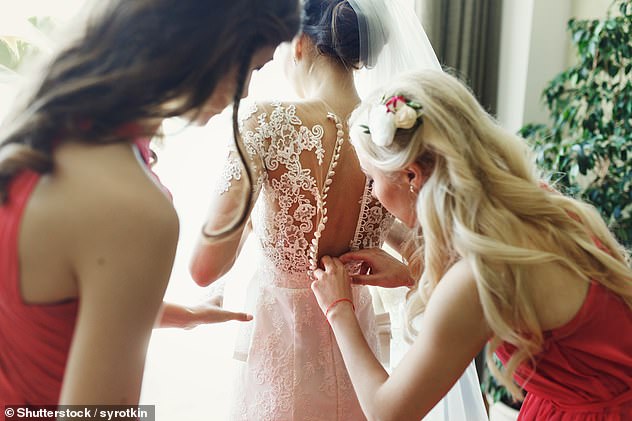 Other standout rules demanded bridesmaids never get drunker than the bride, kiss the bride’s brother, complain about problems or gossip in a bathroom that is occupied by other guests

Many had strong opinions about the post, with many agreeing that while some of the rules were ‘crazy’, others were perfectly fair and made sense.

‘Numbers 2, 6 and 7 are common sense. Number 3 is really smart. The rest are garbage, especially number 1,’ one person wrote.

‘I hate it… you’re a bridesmaid, not a secret service agent. Chill out,’ another added.

‘Sorry, a lot of these seem like common sense if the bride is a really good/best friend,’ a supportive commenter wrote.

‘You as the bridesmaid should have this attitude if you love the bride. It should not be demanded of you by the bride.’