Department of Health officials have yet to confirm the final daily figure, which can often be much higher because it includes fatalities in all settings.

The preliminary tally – which has seen the death toll on the brink of passing 40,000 – is calculated by adding up all of the individual Covid-19 updates given by each of the home nations.

NHS England saw 115 more deaths in hospital patients who tested positive – the youngest a 26-year-old. Scotland posted nine Covid-19 deaths in all settings, followed by eight in Wales and one in Northern Ireland.

Britain’s outbreak has slowed dramatically in the past few weeks. Yesterday health bosses announced 359 more victims – down almost 13 per cent on the 412 deaths recorded last Wednesday.

But analysis of data shows only 345 deaths were recorded in the 27 EU countries yesterday, including 81 in France, 74 in Sweden and 71 in Italy.

Separate backdated data also showed the real number of deaths in Britain has already tipped the 50,000 mark, cementing the UK’s status as being Europe’s worst-hit nation.

In other coronavirus developments in Britain today: 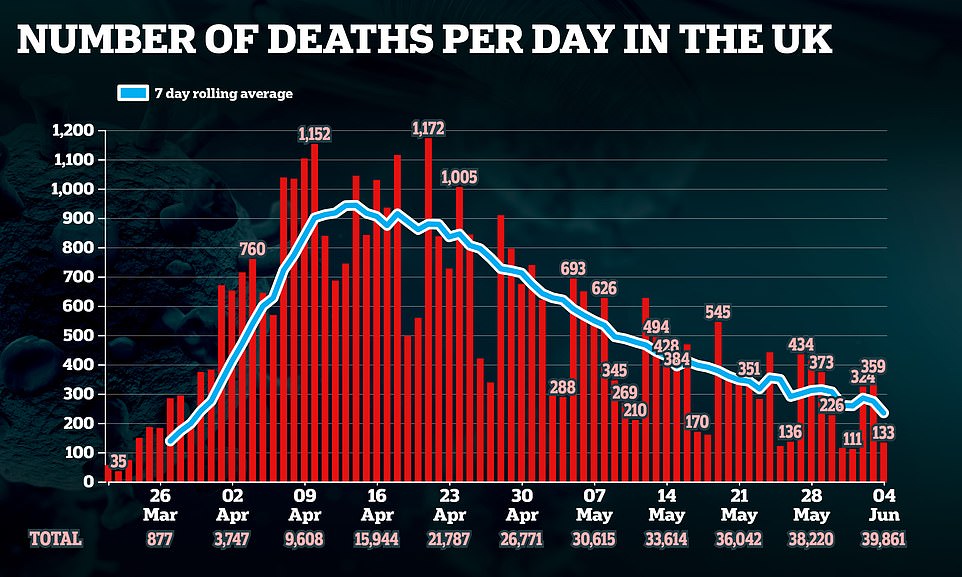 It comes as it was today revealed that police have launched a probe into a care home which was ordered to close after 15 residents died following a major outbreak of coronavirus.

Temple Court in Kettering, Northamptonshire, was forced to shut its doors following the Covid-19-related deaths of patients who were sent there after being discharged from hospital.

The home is now being investigated by police and council bosses amid allegations of abuse and neglect.

Officers are speaking to relatives of the 15 residents following claims they were sent there without being tested after being released from two separate hospitals.