The true number of coronavirus victims in the UK may still be 41 per cent higher than daily Government statistics are letting on.

Weekly data published today by the Office for National Statistics (ONS) showed that at least 13,121 people had died in England and Wales by April 10.

Department of Health statistics had, by that date, announced only 9,288 fatalities – the backdated deaths increased the total by 41.2 per cent. That suggests the death toll of 16,509 confirmed yesterday could actually be more like 23,000.

And care homes in England and Wales had recorded the deaths of at least 1,644 residents by April 10 – 10 per cent of all the UK’s deaths. Today’s update is one of the first real glimpses of the crisis unfolding in the care sector.

Fifteen per cent of all the people dying with COVID-19 were succumbing to their illness outside of hospitals, the stats showed, revealing the crisis cannot be managed solely by the NHS.

And one in every three people (33.6 per cent) who died between April 4 and April 10 had coronavirus.

That week, authorities recorded the most deaths for a single week in 20 years, with 18,516 people dying – 8,000 more than average. Around 6,200 of those were linked to the coronavirus, suggesting a further 1,800 were indirect ‘excess’ deaths.

The record number of fatalities coincides with what now appears to have been the peak of the UK’s COVID-19 outbreak on April 8, when NHS hospitals recorded 803 coronavirus patients dying. 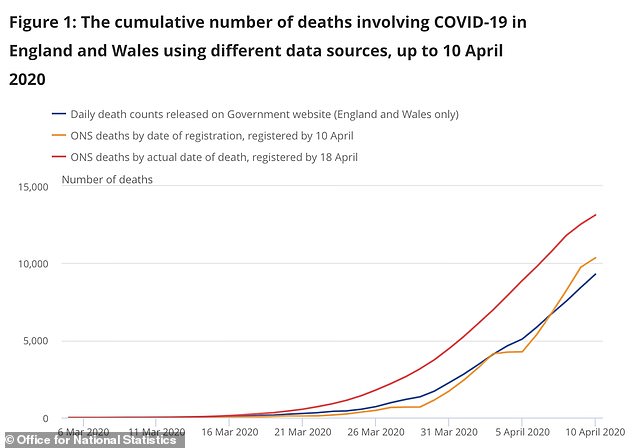 The Office for National Statistics data, which reveals the true scale of coronavirus deaths, is now considerably higher than the Department of Health’s daily updates 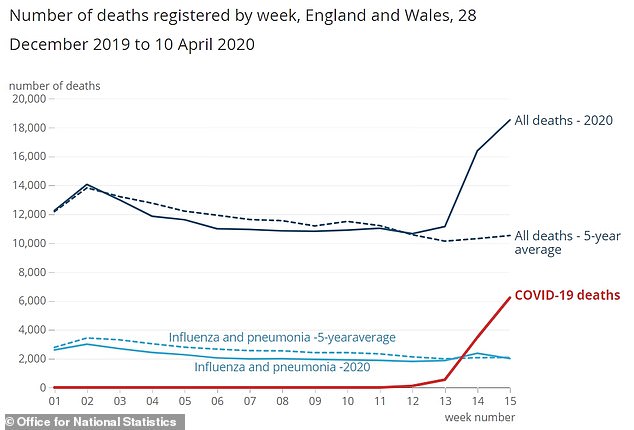 Week 15 of this year (April 4 to April 10), when the coronavirus outbreak is believed to have peaked, was the deadliest week for more than 20 years in England and Wales, and more than a third of fatalities involved COVID-19

‘This shows the terrible toll that coronavirus is having on elderly and disabled people in care homes,’ said Liz Kendall, the Labour Party’s shadow minister for social care.

‘Yet these awful figures are only scratching the surface of the emerging crisis in social care,’ she added, ‘because they are already 11 days out of date.

‘The Government must now publish daily figures of COVID-19 deaths outside hospital, including in care homes, so we know the true scale of the problem.

‘This is essential to tackling the spread of the virus, ensuing social care has the resources it needs and getting vital PPE and testing to care workers on the frontline.’

Deaths that happened in care homes before April 11, and were officially reported by April 18, added up to 1,644, the ONS statistics showed.

And the organisation also revealed 466 people had died at home with the coronavirus, 87 had passed away in hospices, 21 in ‘other communal establishments’ and 45 elsewhere in the community.

The ONS data counts anybody who had COVID-19 mentioned on their death certificate, whether it was the main cause of death or not.

Statistician for the ONS, Sarah Caul, said in a blog post: ‘The figures published on GOV.UK are valuable because they are available very quickly, and give an indication of what is happening day by day…

‘But they won’t necessarily include all deaths involving COVID-19, such as those not in a hospital.’

Ms Caul said the ONS figures, although slow to prepare, are ‘the most accurate and complete information’. 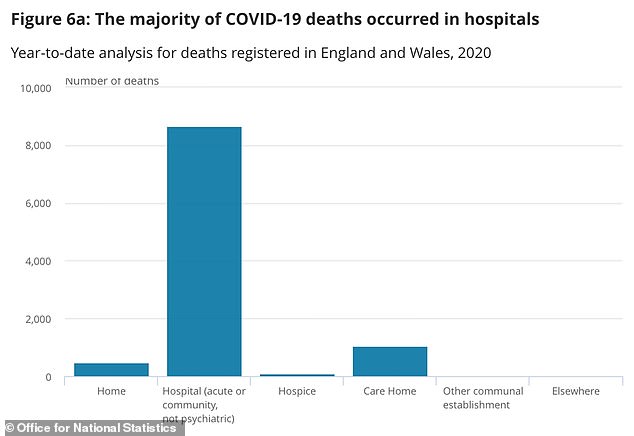 The vast majority of coronavirus deaths are happening in hospitals, but today’s data suggests one in every 10 of them happens in a nursing home 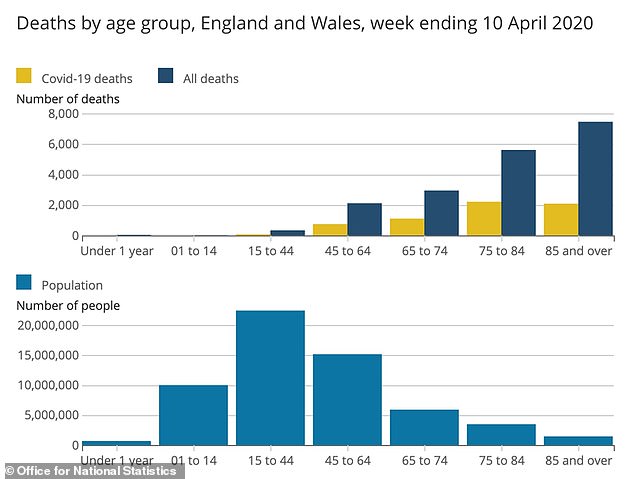 ONS data shows that more people aged between 75 and 84 are dying of the coronavirus than any other age group. The NHS data shows hospital deaths are more common among over-85s 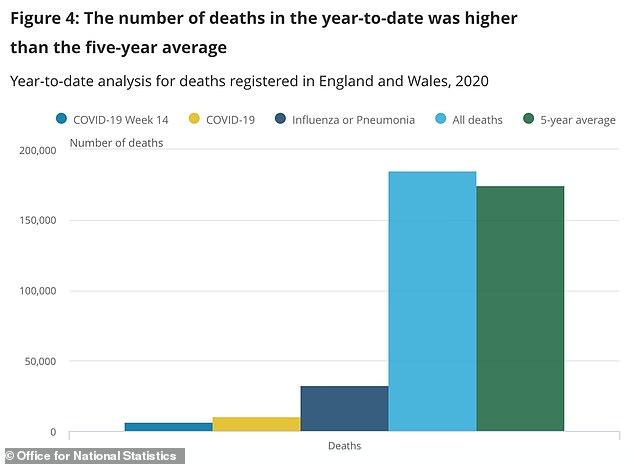 The number of people who have died so far this year in England and Wales (184,950) is significantly higher than average (174,718) because of the COVID-19 outbreak 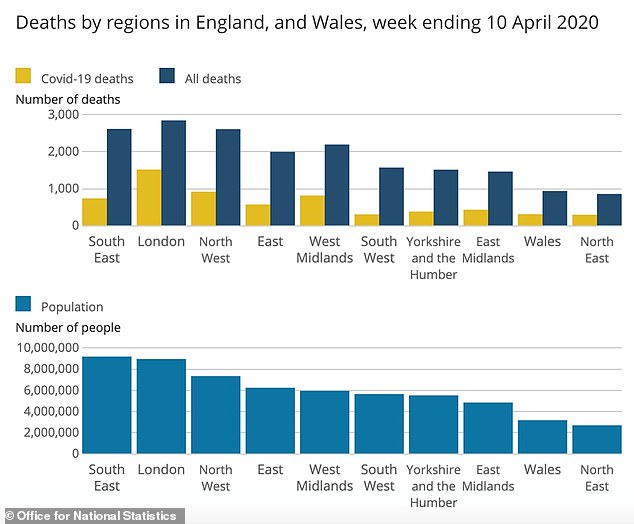 London is still the region with the most deaths caused by coronavirus – 1,506 people there have died with the virus (24.3 per cent of all deaths in England and Wales) 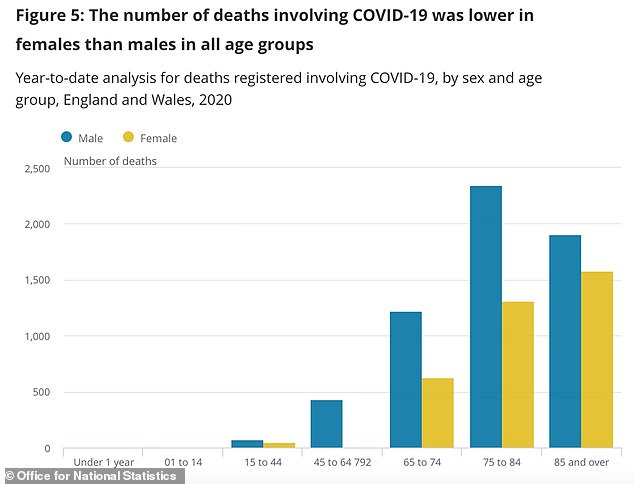 Today’s statistics showed that the coronavirus crisis has sent the number of people dying in England and Wales soaring.

This was a surge of 7,996 on the national average, and at least 6,213 of those people had COVID-19 mentioned on their death certificate.

That means there were 1,783 ‘excess’ deaths which may have been an indirect result of the outbreak, such as people avoiding going to hospital or not getting the medical help they needed because the NHS is so busy.

Professor Keith Neal, a disease expert at the University of Nottingham, said: ‘These latest figures from the ONS show that over 6,000 of the 8,000 excess deaths reported in the week up to 10th April 2020 were COVID-19 related.

‘We know deaths are occurring outside hospitals and this is the best way we have in determining this.’

This week, the deadliest for two decades, coincides with what scientists now believe was the peak of the UK’s coronavirus epidemic – April 8.

NHS statistics show that, in hospitals in England, 803 people died of COVID-19 on Wednesday, April 8, and no day before or since has recorded more fatalities.

Scientists now believe this was the peak of Britain’s devastating outbreak, which is one of the worst in the world with more than 125,000 people being diagnosed with the disease and at least 16,000 dying of it.

Professor David Paton, an economist at Nottingham University, said in a Twitter thread last week: ‘Of course it is possible that there will be another surge and another higher peak later on but recent declines in hospitalisations make that unlikely in the near future.’

HOW IS THE OFFICE FOR NATIONAL STATISTICS DATA DIFFERENT?

The ONS releases data each week on a Tuesday which provides the clearest picture of England and Wales’s coronavirus crisis. The data only relates to a period up to 10 days before it is released, meaning it is out of date, but it includes deaths recorded in every corner of the community.

It broke down the deaths recorded from all across the country, not just the hospitals – which are the figures collated by NHS England and released daily.

These numbers are all backdated in stages and only the testing data – not the deaths – are actually relevant to the day on which they’re published.

The ONS statistics, however, collate death registrations from everywhere – including those recorded by GPs, in care homes, hospices or other parts of the community – and waits until they are all verified and dated properly, then brings out a true total.

This figure will always be larger than the number announced by the Department of Health or the NHS because it is so comprehensive and meticulously put into categories.