THE most commonly misspelled word in Britain is today revealed as…separate.

We get it wrong at least twice as often as any other word, analysis of Google searches shows. 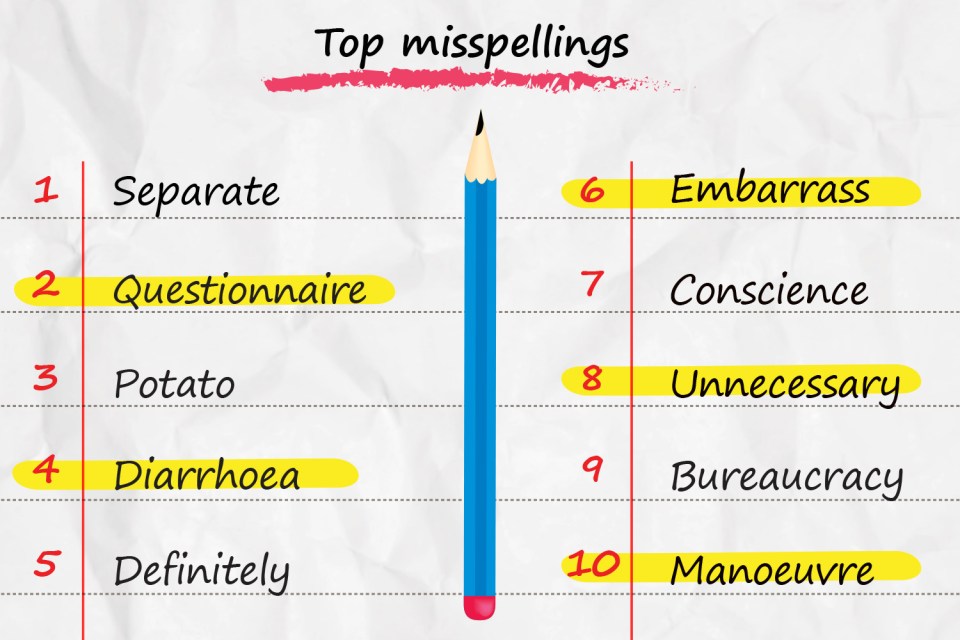 It was typed incorrectly 92,100 times in the past month, the research reveals.

Most who got it wrong tapped in ‘seperately’ — although some plumped for ‘sepperately’ or ‘seperatelly’.

Next on the list was questionnaire, which we got wrong 46,000 times in the past month, usually by using just a single “n”.

Writing potato as ‘potatoe’ was the third biggest bungle.

And, as if to prove we are truly cr*p at spelling, diarrhoea was fourth.

The top 10 most misspelled words were found to be as follows:

The findings come from training provider The Knowledge Academy.

In an accompanying poll of 2,000 Brits, it also found only a quarter of us have a dictionary at home.

The rest say they rely on spell­checkers and online searches to ­eliminate howlers.

Two thirds say they turn to voice-activated assistants, such as Alexa or Siri, for help.

Ghislaine Maxwell is ‘hiding out at a chateau in France’ to avoid being questioned about paedophile ...
British holidaymakers facing rock-bottom exchange rates as Sterling continues to drop against the do...
Philip Hammond will spend up to £16billion on schools, hospitals and Armed Forces if MPs back Brexit...
I haven’t told the police about my girlfriend trying to stab me because I’m worried they’ll take awa...
The Challenge’s Jenna Compono wants to leave show after fiance Zach Nichols finds suspicious message...
Who left I’m A Celebrity last night? Full list of eliminated stars after Rita Simons eviction
Saturday’s UK weather forecast — cold and windy with a yellow weather warning for Scotland and North...
Kim Kardashian hits back at ‘mum shamers’ after putting lipstick on daughter North, five, to promote...