French firemen were battling to bring a group of 100 migrants down from the funnel of a ferry today after they stormed the vessel in Calais in a bid to reach the UK.

British holidaymakers were left stranded on ferries after the dozens of immigrants breached security at the French port late on Saturday and scrambled aboard the Danish-operated ship.

The fire brigade spent Sunday morning talking the last remaining migrants down from the ship’s chimneys until it was finally given the all-clear to head to Dover.

Another four immigrants were also found hiding on the upper deck of the DFDS Seaways-owned MS Côtes des Dunes this morning, according to local media. 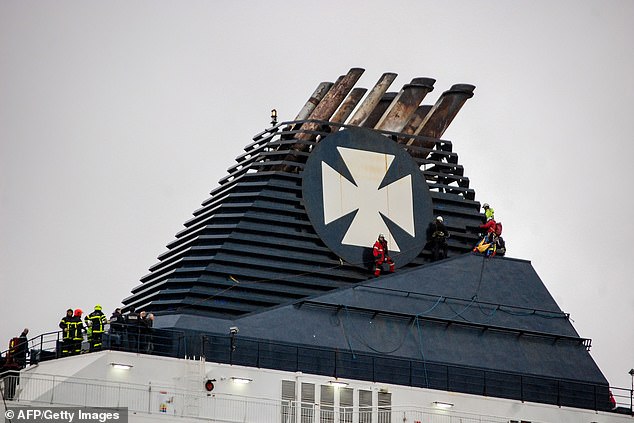 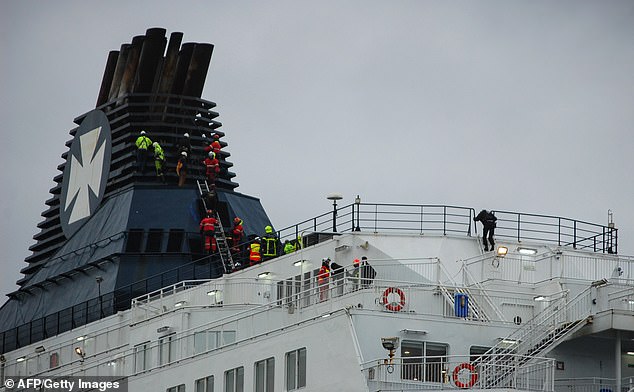 The French firemen attempt to talk the migrants down from the funnel of the ferry, after they breached security at the French port on Saturday evening

A number of P&O ferries set to arrive from Dover, in Kent, were ‘held’ in open water on Saturday night while the situation was dealt with, with the situation brought under control just before 10pm.

At least 46 migrants were thought to have been arrested.

A source said that ‘hundreds’ of immigrants set on coming to the UK had stormed the French port at around 8.30pm, will ferries ordered ‘not to dock’ while the situation was dealt with.

Among the ferries being delayed include the MS European Seaway and the Spirit of France – both P&O ferries – and the MS Côtes des Dunes, a ferry operated by DFDS Seaways.

A spokesman for the Port of Dover confirmed that Calais was ‘dealing with a situation’ at the port and that some vessels had been unable able to dock in France.

Sotiri Dimpinoudis, writing on Twitter just after the immigrants stormed the port at around 8.30pm, wrote: ‘The docks of the sea shore in Calais in France is on lockdown because hundreds of Illegal migrants of the ‘Calais jungle’ stormed and breached through the fences and barriers, trying to sneak into a ship heading towards the UK.’

A source said: ‘The immigrants forced their way into the port of Calais at 8.30pm and the place was put on lockdown, with ferries being told not to dock.

‘It’s taken just over an hour for them to be dealt with, but this is something we can expect to see more of in the coming weeks.’

Passengers on board ferries to Calais said they were told by the captain that more than 100 immigrants had stormed the port.

Matt Perry wrote on Saturday night: ‘Currently sat on a P&O ferry outside Calais as captain say its closed due to over 100 immigrants storming the port.’

Another, calling themselves Driver/horsebox wrote on Twitter: ‘Calais currently closed due to over 100 immigrants storming the port.

‘Announcement from the captain of the boat that we were very lucky to get on.

‘Currently bobbing up and down waiting for it to reopen.’

Darrell J Martin wrote on Twitter: ‘My daughter’s stuck on a ferry outside Calais waiting to get in.

‘She says the ports is closed due to immigrants trying to get on ferries leaving Calais.

Bosses at DFDS Seaways confirmed that it was ‘experiencing delays’ between 8pm and 9.30pm with a number of cancelled ferries due to ‘operational reasons’.

It tweeted at 8.56pm: ‘DOVER-CALAIS-DOVER – Cancelled services due to operational reasons – Customers will be transferred onto the first available.’

‘Traffic (was) being held at the juxtaposed controls while French police and port authorities resolve the situation.’