A British man has drowned in Austria after suffering a cramp in his foot while swimming in a lake.

Police said the 33-year-old man was in the water in the Schwarzindien beach area in Mondsee, less than 20 miles east of Salzburg, on Wednesday when the incident took place.

Officers confirmed that the man was with a 36-year-old woman, also from the UK, when he complained on the pain and went below the surface. 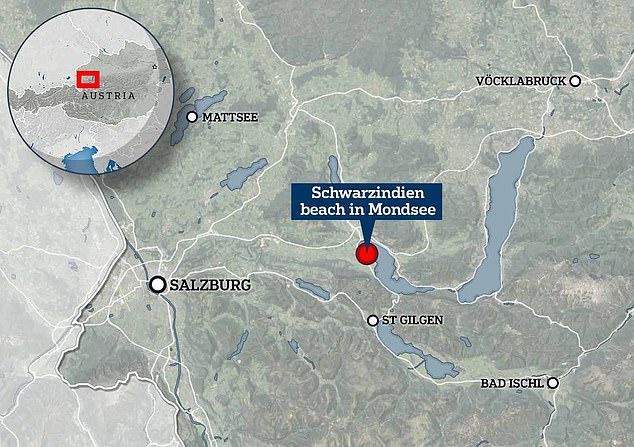 Police added: ‘When he did not come back to the surface of the water, she screamed for help.’

Other bathers tried to help but the man’s body was recovered at around 4.30pm local time, officers said.

It is not yet known whether the man was on holiday in the region and what relation to him the woman he was with was.

MailOnline has contacted the Foreign Office.

Boris Johnson unveils Tory bid warning party will die unless Brexit happens
New York hospitals are quietly testing heartburn drug famotidine (Pepcid) as treatment for COVID-19
Donald Trump will have lunch with the Queen at Buckingham Palace
Thief steals car with small child strapped in back seat while vehicle was defrosting in a driveway
Roger Federer confronts umpire after he is caught swearing on the court
Roads melt and animals drop dead amid 120F Australian heatwave
Mystery as dozens of dead whales are found beached in Iceland
Iran's only female Olympic medallist, 21, announces she has defected to Europe