Bizarre photographs taken at a World War One camp give a whole new meaning to the term ‘theatre of war’ as British prisoners dress up in drag to keep moral up while imprisoned by the Germans.

Snaps reveal a selection of amateur dramatic society performances at the Schweidnitz camp in East Germany. 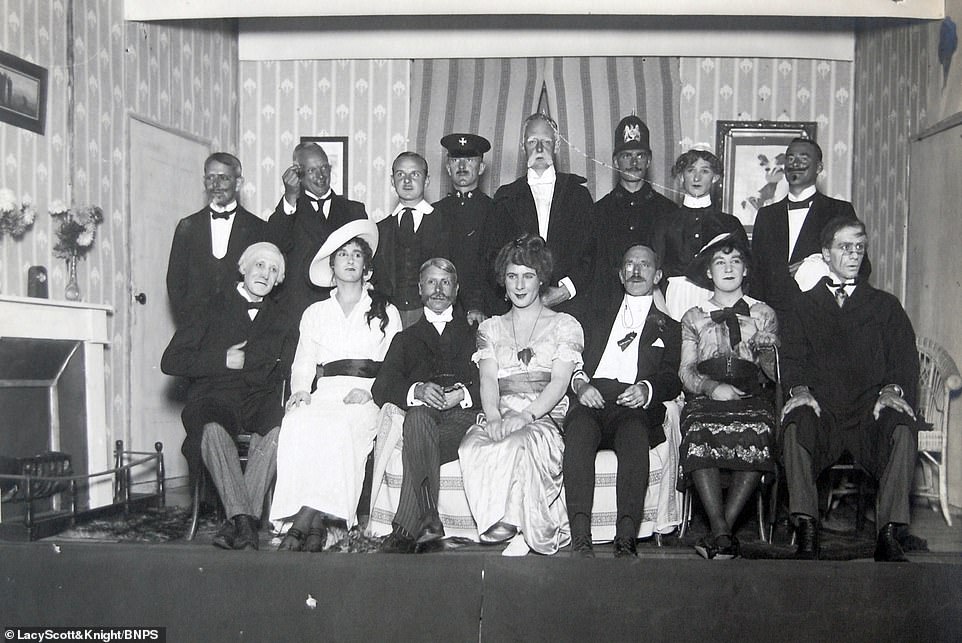 Performers pose in a variety of costumes, including some in drag costumes in the front row. No corners have been cut when it comes to the costumes, as the men appear in full suits with dresses and wigs for those in drag 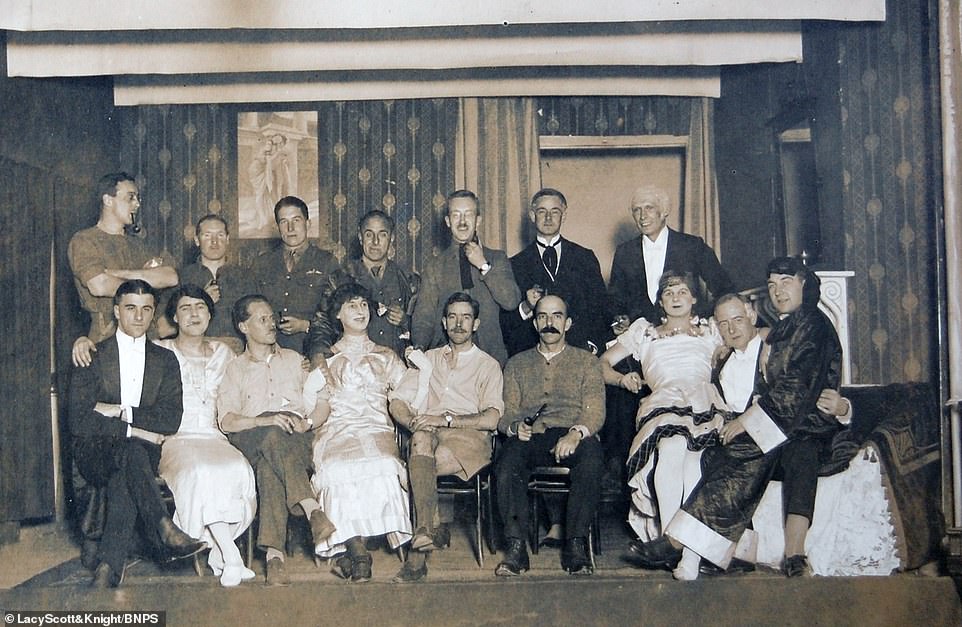 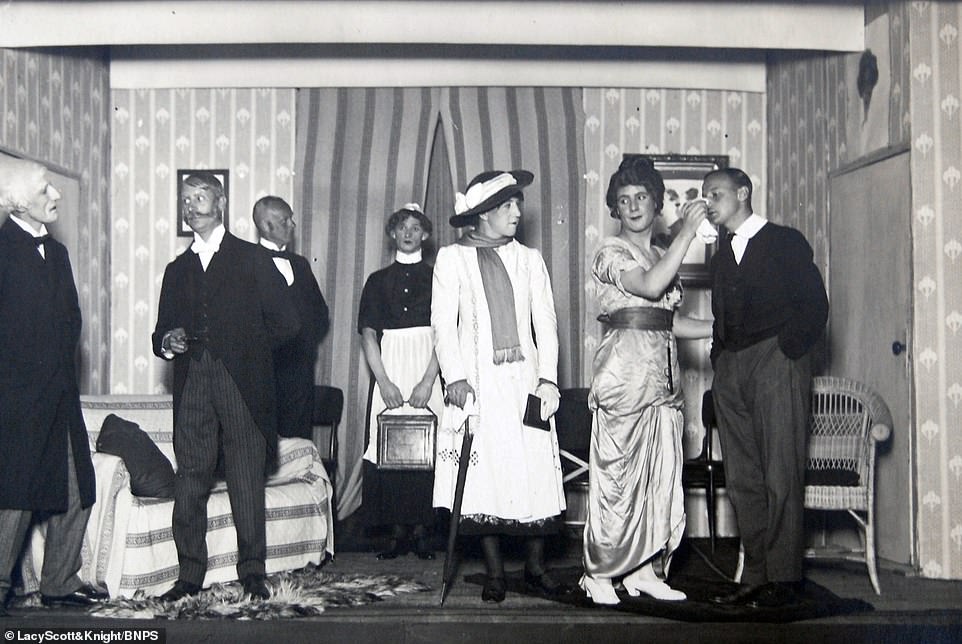 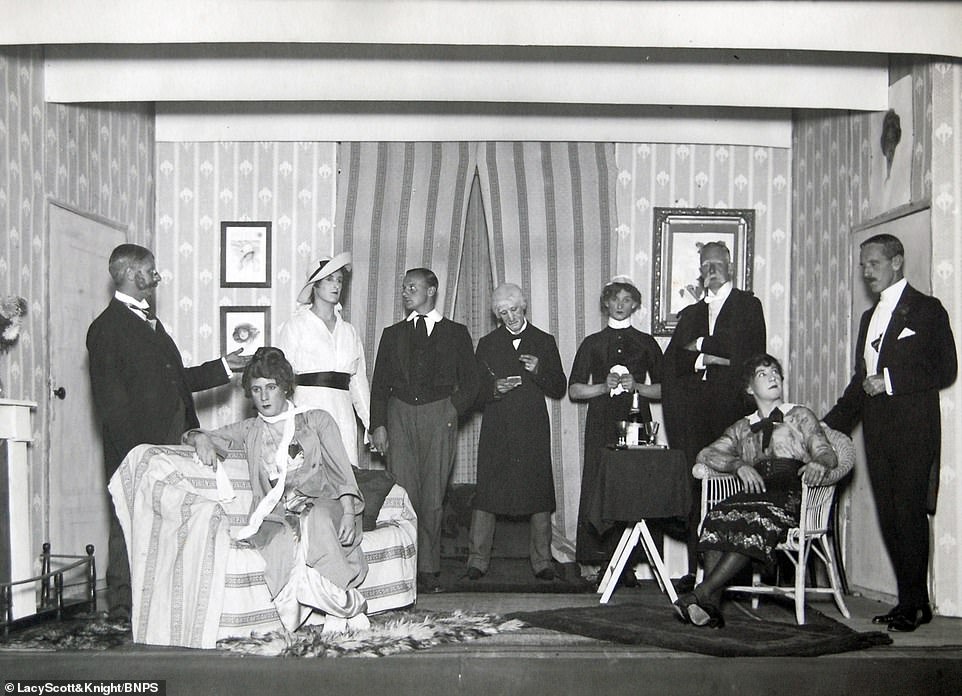 Another photograph shows the ‘actors’ performing on stage. Performing was a popular way which the group used to keep their minds occupied while in captivity. Sometimes they would spend up to six hours a day trying to master the role

The incarcerated British soldiers seem to be taking their role in the strange production very seriously and have gone the extra mile with their costumes.

Two of the prisoners of war dressed up as Roman centurions, while another officer is a damsel in distress in the arms of their captors.

Tuxedos, evening gowns and police uniforms were also included as part of the costumes used by the prisoners.

The archive contains a programme and character list for one of the productions, the farce ‘The Magistrate’.

The shows would be advertised in camp newspapers and magazines including ‘The Barb’ magazine.

The officer camps of World War One tended to be far more welcoming places than the Nazi Second World War equivalents and guards turned a blind eye to prisoners smuggling in cameras.

The album, which contains 40 photos, has now sold for £40 with auctioneer Lacy, Scott & Knight, of Bury St Edmunds, Suffolk.

Glenn Pearl, specialist at Lacy, Scott & Knight, said: ‘Amateur dramatic societies were a popular morale-boosting feature at the officers’ POW camps during World War One, alongside sporting societies, orchestras and other groups.

‘Part of the barracks would be transformed into a theatre with prisoners producing their own costumes and sets, an important mental diversion to help lift the tedium of prison life.

‘These camps were a far cry from the squalid conditions of camps in popular imagination, which was mainly formed by the very different experiences of captives in World War Two.’

Cross-dressing has more commonly been associated with World War Two officers’ PoW camps, where being chosen to perform as a women was a big responsibility.

Actors rehearsed six hours a day for three months to master the role, during which they were taught elocution and expression.

They also had their ‘unsightly masculine limbs’ shaved, eyebrows plucked, hair on their head grown long and were made up with grease paint, cosmetics and nail varnish. 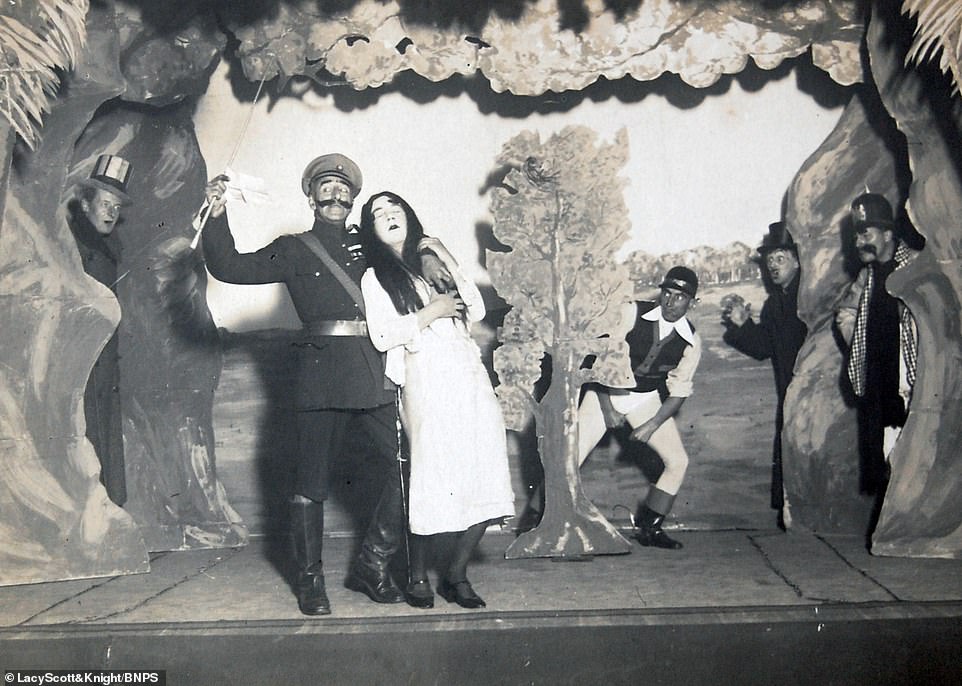 A scene involving five officers, one as a damsel in distress in the arms of a captor. The scene of the play appears to be taking place in a field, with prop trees on the side with people hiding behind them. Another tree is in the middle of the set, where one of the actors hides behind 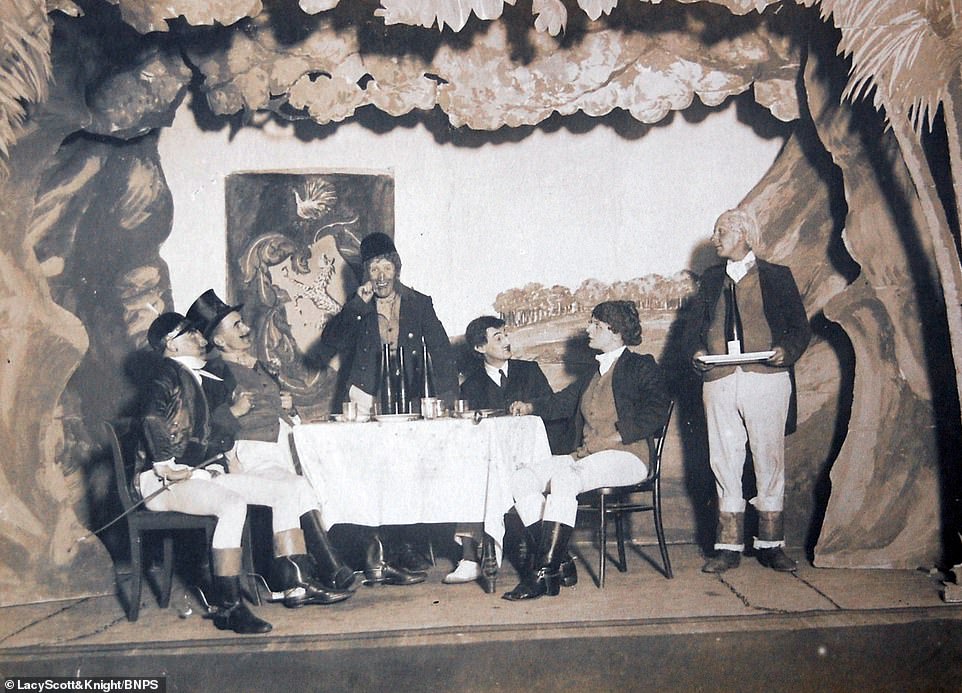 The actors, dressed to the hilt in suits and hats, sit around a table during a scene from a play. The cast seem in high sprirs with the middle man smiling for the camera and the others refusing to break character for the photograph 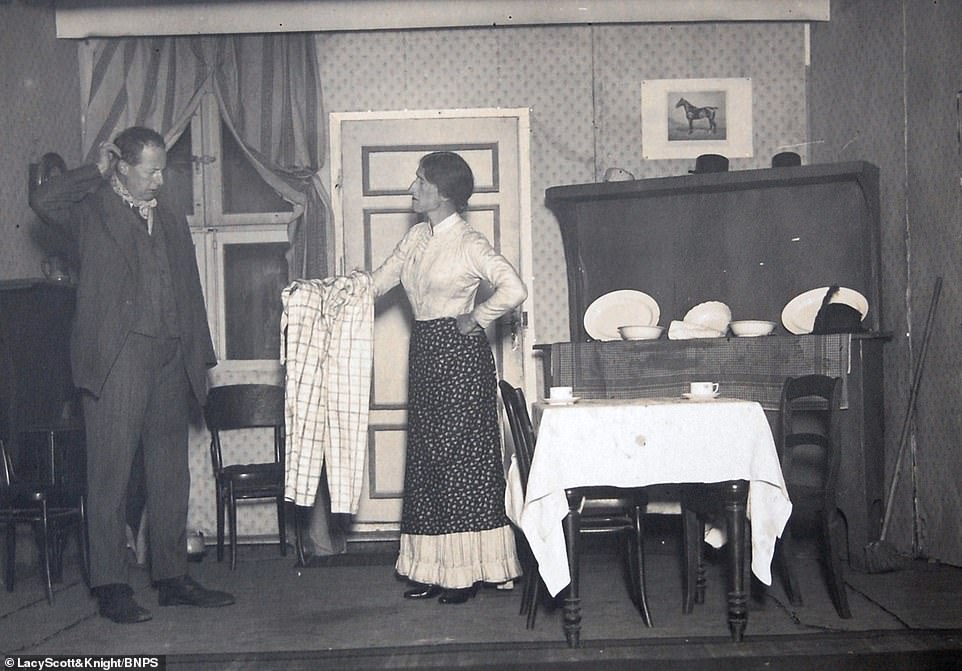 A domestic scene in one of the performances by incarcerated British officers. One plays the role of the house wife, much to the confusion of the other actor looking at a pair of checkered trousers 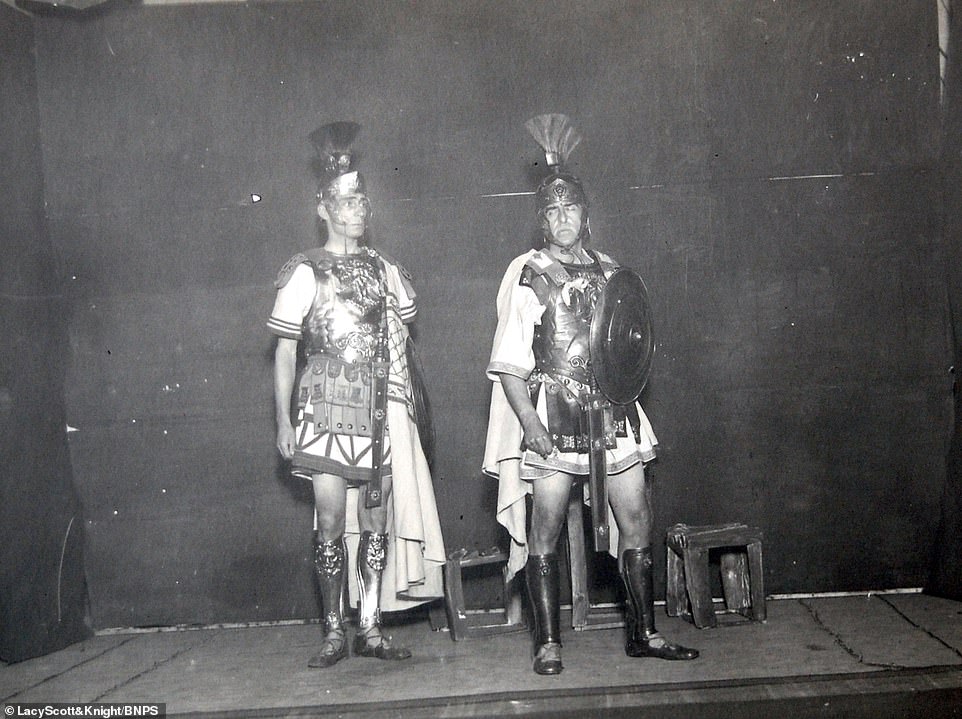 Two performers dressed as Roman Centurions behind a blank stage. The snaps reveal a selection of amateur dramatic society performances at the Schweidnitz camp in East Germany 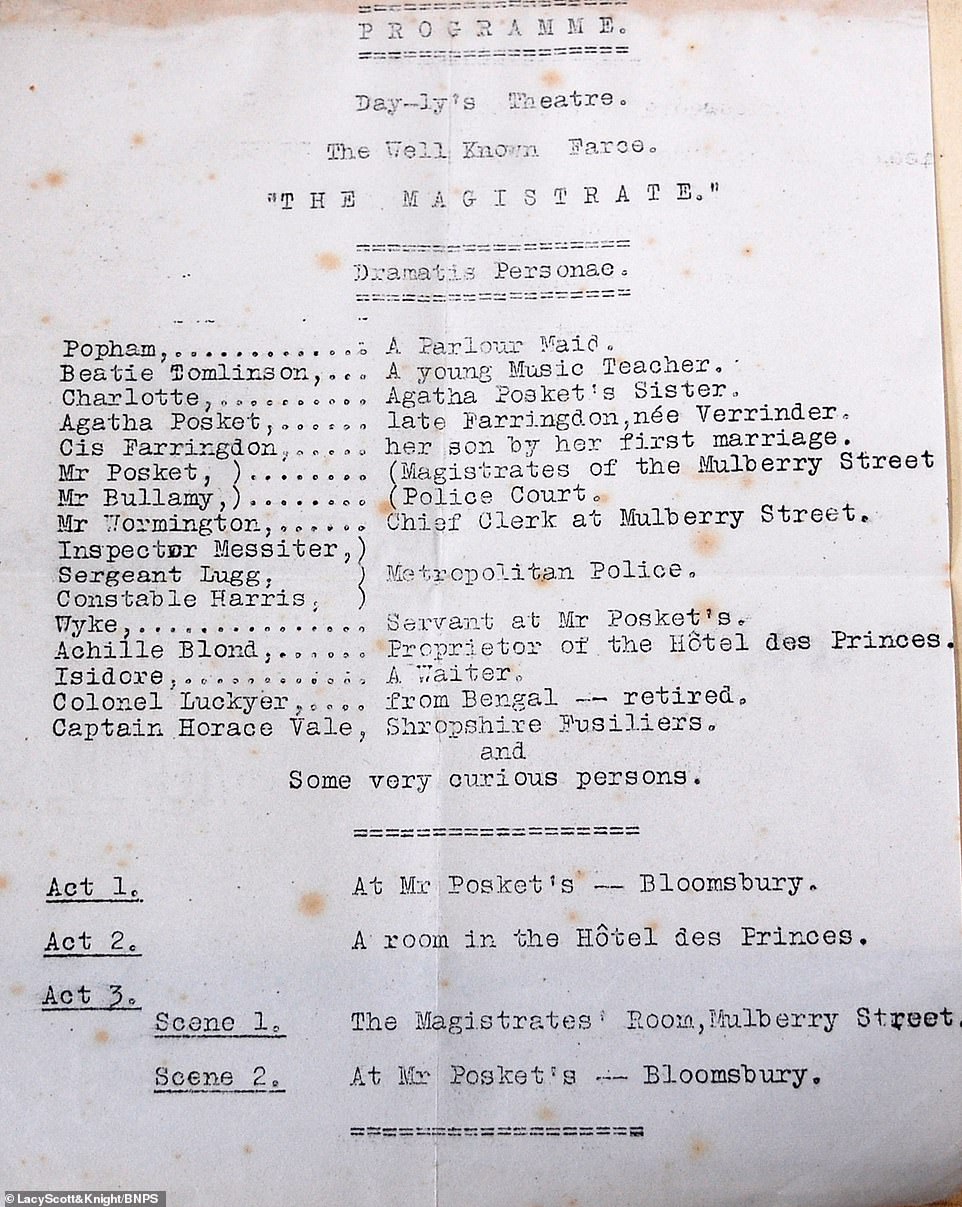 A cast list for one of the productions from the Schweidnitz camp in East Germany during World War One. The album, which contains 40 photos, sold at auction with auctioneer Lacy, Scott & Knight, of Bury St Edmunds, Suffolk