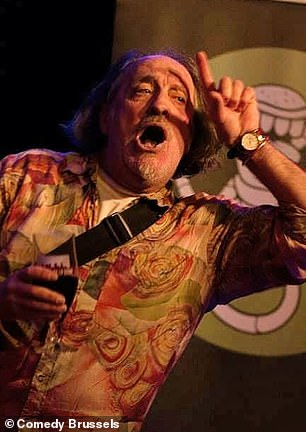 A smiling Ian Cognito entertaining the crowd at one of his gigs in Brussels, Belgium. Although he never hit mainstream success, he was a popular and unpredictable comedian

British stand-up comedian Ian Cognito died on stage only ten minutes after joking about having a stroke, leaving the audience thinking it was part of his act.

During his act the popular comic is said to have ‘sat on a chair and laid back for five minutes’ at the Atic bar in Bicester where the Lone Wolf Comedy Club was being held on Thursday.

Audience members were under the impression this was part of the act and continued to laugh at the supposed joke, with no one aware that Cognito was seriously ill.

John Ostojak, who attended the show, told the BBC: ‘Only 10 minutes before he sat down he joked about having a stroke.

‘He said, ‘imagine having a stroke and waking up speaking Welsh’.

The compere eventually approached the stage and an ambulance was called after 10pm but Cognito was pronounced dead at the venue.

A number of comedians have paid tribute to the comedian, including Rufus Hound, Jimmy Carr, Mark Steel and Katy Brand.

Actor and comedian Hound said comedy had lost ‘one of the greats’. 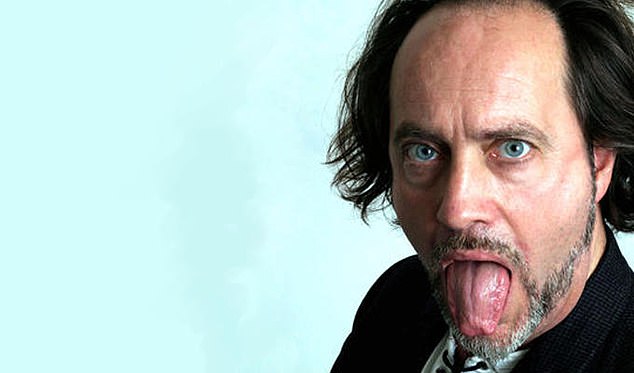 The iconoclastic performer never achieved mainstream success, in part because of his unpredictable nature and routines, but was beloved on the comedy circuit 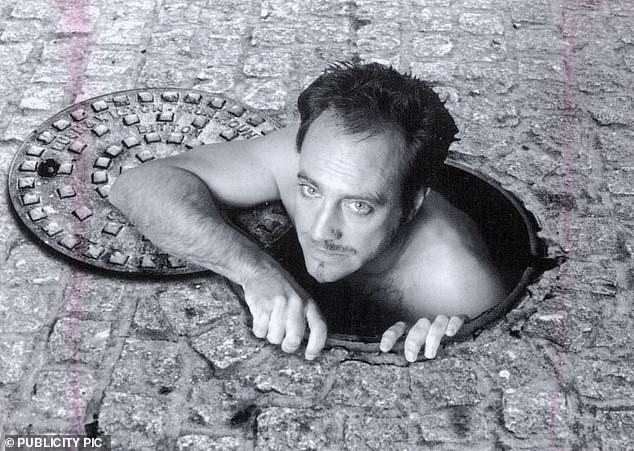 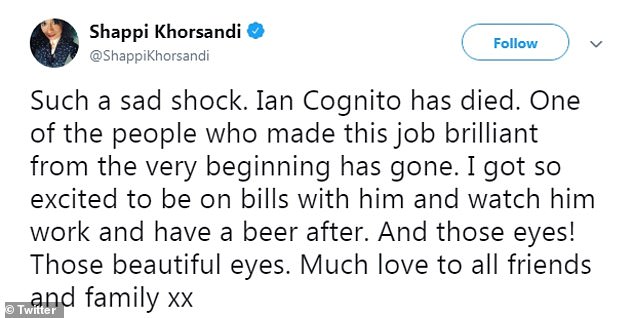 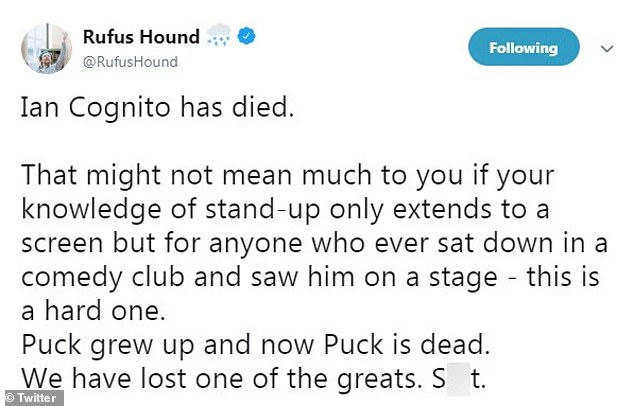 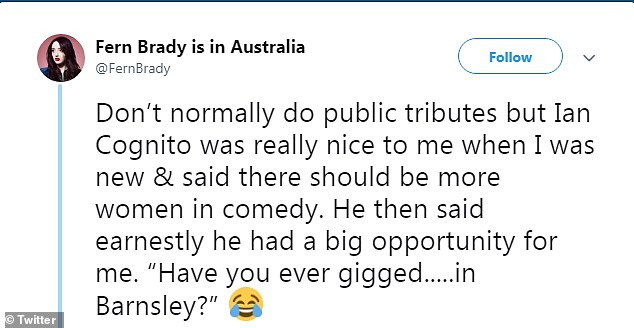 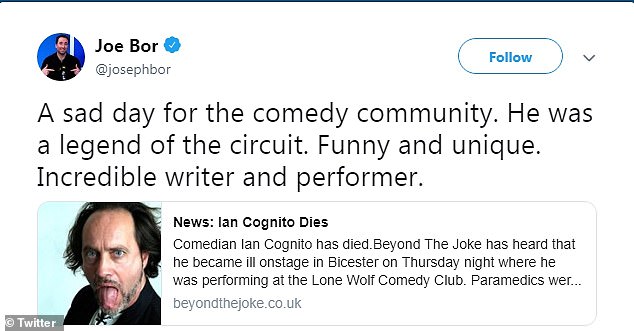 He said: ‘Ian Cognito has died. That might not mean much to you if your knowledge of stand-up only extends to a screen but for anyone who ever sat down in a comedy club and saw him on a stage – this is a hard one.

‘Puck grew up and now Puck is dead. We have lost one of the greats. S**t.’

Brand paid tribute to ‘Cogs’, as he was known on the comedy circuit, saying: ‘Sad to hear about Ian Cognito.

‘I hung with him a good few times in the past, and he was always fascinating and hilarious company. RIP Cogs.’

Tiffany Stevenson, who has appeared on Russell Howard’s Good News and Mock The Week, celebrated Cognito’s reputation as a hell-raiser.

She said: ‘There has never been more apocryphal tales around a comedian than Ian Cognito. If half of them are true the s**t he got up to during the heydays of the circuit is of legend.

‘Wondering/hoping that at the wake someone will bang a nail into the wall and hang a coat on it.’ 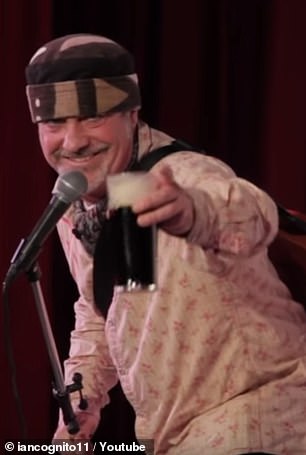 A smiling Ian Cognito entertaining the crowd at one of his gigs. Although he never hit mainstream success, he was a popular and unpredictable comedian

A statement from the ambulance service read: ‘We were called at 22:11 last night to Crown Walk in Bicester to a medical emergency.

‘We sent a rapid response vehicle and an ambulance crew but sadly one patient passed away at the scene.’

Thames Valley Police said that no further investigation was required.

Stand-up Luisa Omielan said: ‘Just heard about Ian Cognito, I saw him one once in stage years ago and was in awe, he was as epic as his reputation. Rebellious and brilliant.

‘I heard he passed away after being on stage. He even died like a f****** legend. Far far too soon. Love to his family.’

‘The audience thought it was part of the act. Died with his boots on. That’s commitment to comedy.

‘I’ll never forget his kindness when I started out & how damn funny he was.’

Cognito enjoyed cult status among his contemporaries and won the Time Out Award for Stand-up Comedy in 1999.

But the iconoclastic performer never achieved mainstream success, in part because of his unpredictable nature and routines.

Little Britain star Matt Lucas said: ‘In shock at the news of Ian Cognito’s sudden passing. He was always kind to me when I started out, and brilliant and provocative and entirely original onstage. What a loss.’

Who is comedian Ian Cognito?

Paul Barbieri was born in London, 1958, and took up the stage name Ian Cognito when he started performing in the 1980s.

While the Bristol-based comedian did not achieve the mainstream success of some of his colleagues, he was praised by many in the industry as a ‘one of the greats’ and a ‘true maverick’.

Cognito, who won the Time Out Award for stand-up comedy in 1999, was known for arriving on-stage with a hammer and hitting a nail into a wall so he could hang up his coat.

He would then comment: ‘This lets you know two things about me. Firstly, I really don’t give a s***. Secondly, I’ve got a hammer.’

Cognito was known as one of the most controversial acts in the business – and would insult audience members and other public figures throughout his routines.

In his memoir, A Comedian’s Tale, he described his on-stage persona as his ‘Mr Hyde’.

He died on April 11 at the Atic bar in Bicester, Oxfordshire, where the Lone Wolf Comedy Club was being held.

'Megaoesophagus': Doctors release scans of 97-year-old's 'impressive' food pipe that led to death
Revealed the bewildering language of modern lonely hearts and the women who know what it all means
After Damascus raid, Israel says working to keep...
Elon Musk taps Robert Kraft's lawyer to defend him in defamation case against hero British diver
BAZ BAMIGBOYE: Madonna gets gets into the groove for a biopic
How to burglar proof your home this winter: We reveal the best home security hacks
Strictly's Seann Walsh APOLOGISES for kissing married dance partner Katya Jones
John Macris' bodyguards scoured dumpsters for bombs in the days before he was gunned down