BRITS are set to enjoy temperatures of up to 28C today as the UK braces for an “Africa heatflare” bringing with it a 36C heatwave.

Sunseekers will see the mercury continue to rise as the country looks set for an absolutely scorching weekend.

A paddleboarder enjoys the last of yesterday’s sunshine as it appears beneath a black cloud just before sunset at Heacham, Norfolk[/caption]

Brits are getting ready for a 36C heatwave[/caption]

Temperatures are expected to climb to 28C tomorrow[/caption]

Brits can look forward to a sunny weekend[/caption]

Forecasters have said the August will save the summer[/caption]

Today will bring hot weather of up to 28C for parts of the UK ahead of the heatwave – but it won’t all be sunshine.

The Met Office forecast parts of the country will have to deal with damp conditions as a band on rain moves in off the Atlantic.

East Anglia and the South East are forecast to enjoy the most of the sunshine during the afternoon, before showers then blow across in the evening until midnight.

Met Office forecaster Aidan McGivern said an “exceptional hot spell” is on the way later this week in a forecast on YouTube.

Speaking about today, he said: “There will be some sunshine, East Anglia and the South East doing the best for sunshine and temperatures responding as a result.

“A warmer day to come compared to Tuesday, 27C perhaps even 28C if there is enough sunshine.”

However, he warned for much of the rest of the country it will be “largely cloudy and damp for many places”.

Mr McGivern said: “Its not cold, but it won’t feel particularly pleasant given the wind.”

According to the Met Office, temperatures will rise throughout the week before peaking at the weekend.

It is said there is a 60 per cent chance of heatwave conditions in London and the South East on Friday.

A woman poses for a photo at Hitchin Lavender farm in Ickleford, Herts[/caption] 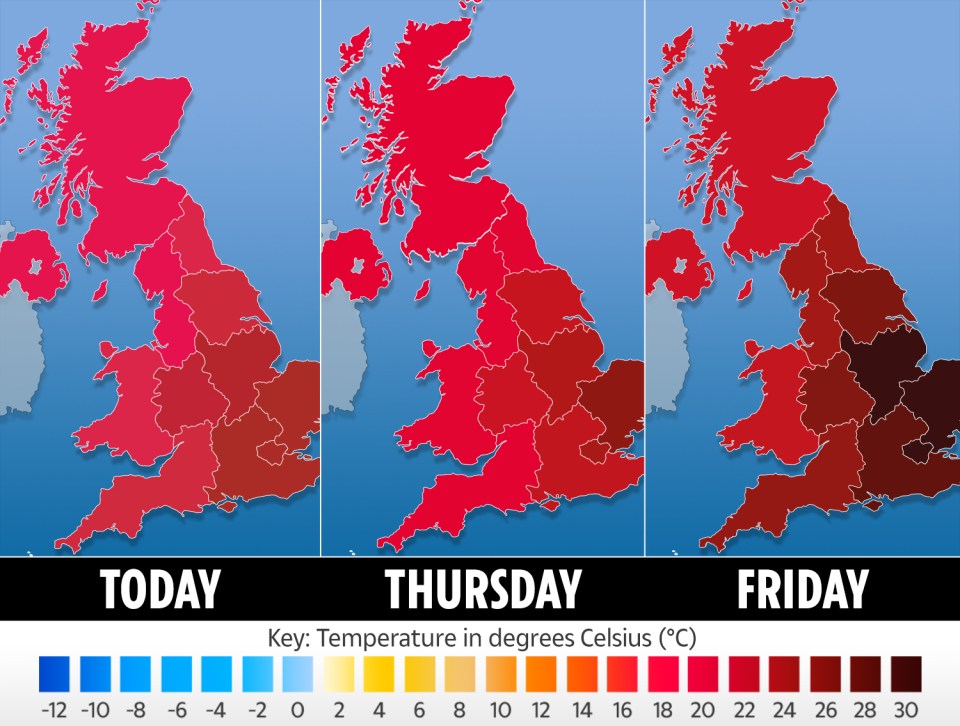 Temperatures will be 36C on Friday and Saturday[/caption]

The 700-mile plume of hot air will move over the UK as forecasters predicted August would “save the summer”.

Met Office Meteorologist Bonnie Diamond told the Sun Online: “From Thursday we will start to get a southerly wind moving across the UK and that’s bringing warm air from the continent.

“It’s going to feel warmer for all parts of the UK but particularly hot for southern and central England.”

Forecasters have issued a Level 2 health warning for the hot blast, meaning authorities are on high alert to reduce harm for a heatwave.

Heatwaves can have serious health implications for some, so it is worth keeping an eye on the latest guidance from the Met Office and the NHS if you are thinking of going out.

Parks and beaches are expected to be busy[/caption]

A woman enjoys a dip amid the hot weather[/caption]

Metereologist Marco Petagna told The Sun Online that things will hot up as the country gets closer to the weekend.

He said: “The trend is that things will get much warmer on Thursday, though there is a risk still of some cloud in the north west.

“For the north and the north-west temperatures will be hovering around the mid-20s.

“But the real heat and the best of the weather will be down south.

And the warm weather could be here to stay.

Beaches have been rammed as many Brits enjoy staycations[/caption]

Two women go for a stroll in Bournemouth[/caption]

A Met Office spokesman, told The Sun Online: “The spell of heat at the end of this week will remain in place longer than the very brief spell we saw last weekend.

“Parts of the south and east of England are likely to see the fine conditions remain into the early part of next week, although there is less certainty over the exact duration.”

Temperatures of 36C are currently forecast to hang around in the UK on Friday and Saturday before lowering to 31C on Sunday.

Blast in Beirut kills 78 after 'warehouse filled with chemicals' exploded

Boy, 10, survived being swept out to sea by floating on back…like he saw on TV

“Computer models suggest a very warm or hot period from Thursday, lasting for as long as mid-month. 35C is possible again.”

It comes as the mercury hit 37.8C in London last week – making it the third-hottest day in the UK EVER.