A bumbling burglar put himself in the frame for a series of break ins – after he got his hair permed.

Career criminal Josh Buxton, 30, had his locks curled after years of sporting a crewcut – and he even showed off his new hairstyle on social media.

When he was freed early from jail following a stretch behind bars, police spotted Buxton’s telltale curls when he was captured on CCTV targeting shops and businesses in Stockport, Greater Manchester.

Josh Buxton, 30, from Offerton, Stockport, had his locks curled after years of sporting a crewcut 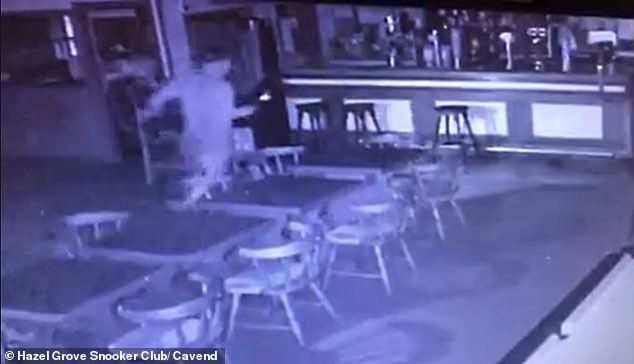 Despite him wearing face coverings in some of the raids, officers recognised Buxton in various security footage given to him by a string of victims – one of whom lost £52,000 worth of computer equipment.

At Minshull Street Crown Court, Manchester, father of three Buxton of Offerton, Stockport who had 57 previous offences on his record, appeared via video link from jail with his hair noticeable straighter.

He was locked up for 29 months after he admitted burglary, attempted burglary and handling stolen goods.

Sentencing Judge John Potter told him: ‘Each of these offences has caused loss, inconvenience and significant worry to each of the owners of the business premises that were targeted by you.

‘These offences represent another episode in your life where for your own selfish purposes of greed, you have caused harm to others. Bluntly, you are nothing more or less than a corrosive influence on our community.

‘You have chose to contribute little, if anything positive in your life to others in the community. If you continue making such a choice, you can expect to go to custody for longer and longer periods.

‘You were recognised on CCTV and there was loss to the victim, ransacking and in one case a confrontation. You targeted these businesses and used planning to force entry whilst equipped for stealing.’

The court heard most of the raids took place over a 24 day period in September last year after Buxton was freed early from jail from a 16 month stretch imposed the previous April for six burglaries of commercial premises.

During one raid, Catherine Roachford who runs Rhode Island cafe was targeted just minutes after she shut up shop for the day.

She was cashing up in the basement when Buxton broke in and grabbed a £100 cash float before dropping it onto the floor.

Geoff Whelan prosecuting said CCTV showed Buxton’s face before he put his mask on and he was recognised by police. But after his name was a circulated on a police ‘wanted list,’ Buxton looted £5,000 worth of camera equipment from a video production company then the following week plundered £52,000 worth of computer and photography equipment from a film company. 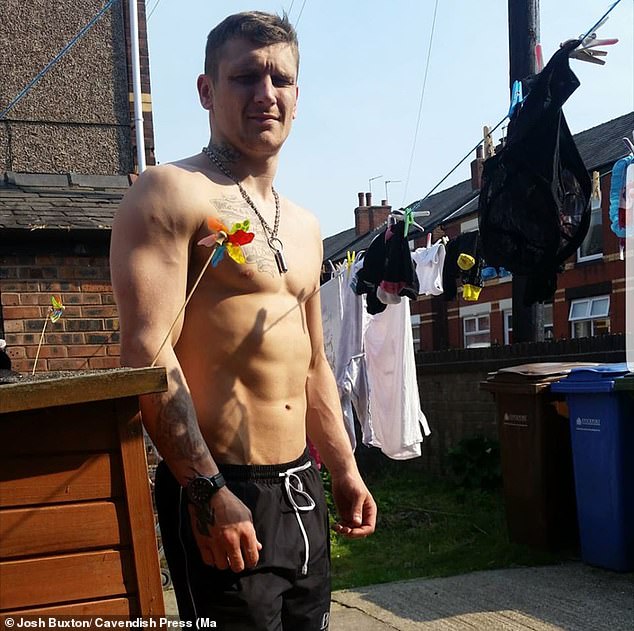 He was locked up for 29 months after he admitted burglary, attempted burglary and handling stolen goods. (Pictured is Buxton before he got his hair permed).

The business owner was able to track one of the stolen computers to another man’s house and police went to the address to find some of the missing items stuffed into a shed.

An SD card recovered from one the stolen cameras had footage of Buxton selling it the householder and another unknown man. The householder initially claimed he and bought the items legitimately but he later accepted a police caution.

In a statement Nicholas Williams who runs Feral Films in Stockport said: ‘We are a new company and we have lost projects that we had worked on and are currently working on. I had work stored on hard drives that we have already been paid for by our customers and we’ve had to inform them that we can no longer produce the work requested. This may cause us to lose business and customers.

‘There is also the fear and worry that we maybe targeted again. It’s not just about losing computer items. It is work we need to continue to operate and if we were to collapse that would result in four people becoming unemployed.’

Hannah Cunningham who had to pay £250 for damage to a door after her beauty salon was targeted by Buxton in a botched raid told police: ‘I am worried this man will come back and I’m considering having security shutters fitted which will costs thousands of pounds.

‘I am a small business and paying this sort of money to make the premises more secure is something I can ill afford. But I feel I have to do this to keep it safe. This sort of thing is how small businesses go out of business.

Buxton was eventually caught whilst raiding a medical industrial equipment supplier in Stockport, at about 2.45 a.m. on September 27. Police attended after the alarm activated and found him hiding in an archive room.

In mitigation defence lawyer David Morton said Buxton’s mother had died ahead of his release from jail in July last year and he ‘spiralled into a very dark place.’

Mr Morton added: ‘He had always lived with his mother and she had always assisted him with difficulties in his personal life. He came out of prison to a new domestic situation entirely and he was at a loss at how to provide for his three young children.

‘He was not in receipt of medication and found life life extremely difficult and made very poor decisions generally. He was grieving for his mother but he handled the whole situation very poorly indeed. He offers his apologies to the victims. ‘