Hertfordshire Police posted a photograph of one of their Inspectors as part of an appeal to trace a wanted man.

The force’s website published a picture of Welwyn Hatfield’s new Neighbourhood Inspector Wayne Nash in uniform outside Hatfield police station with the word ‘Wanted’ in the corner of the picture.

The text accompanying the image was an appeal to find Chris Carrington, aged 25, of no fixed address, who is wanted for grievous bodily harm (GBH) and has connections to Bovingdon and Hemel Hempstead.

The copy said: ‘This picture of Chris was taken in 2014 so his appearance may have changed. 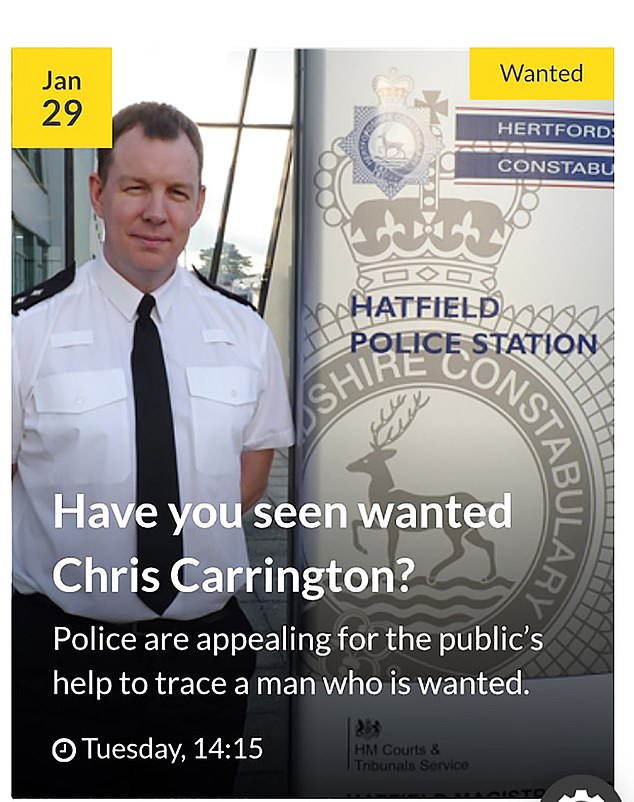 WANTED: Have you seen this man? A bungling police worker accidentally put out this image 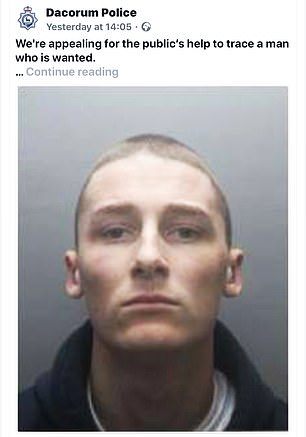 It continued: ‘Anyone who sees him or knows of his whereabouts is asked to contact Hertfordshire Constabulary via the non-emergency number 101 or online.

Alternatively, you can stay 100% anonymous by contacting the independent charity Crimestoppers on 0800 555 111 or via their untraceable online form.’

The blunder was mocked by residents of the county who spotted the mistake.

One Hertfordshire resident said: ‘If that man in police uniform is Chris Carrington he has changed his appearance very effectively and is hiding in plain sight.’

A police spokesman said: ‘An incorrect image was shared of a serving police officer with our wanted appeal for Chris Carrington on Facebook and on our website.

‘As soon as we became aware of this we removed the image and updated our website and Facebook post with the correct image of Mr Carrington.’

Inspector Nash joined the police service in 2001 and only became part of the Welwyn Hatfield Safer Neighbourhood Team a few weeks ago.

Union boss McCluskey blasts reports that Jeremy Corbyn has been left unfit to serve by a stroke
Mother, 28, strangled four-year-old son to death before taking her own life, police reveal
Tickets sell for up to £13,000 a head at Wimbledon
Man in his 30s is stabbed to death in south-east London as 17-year-old is gunned down in Iselworth
Pictured: Man arrested over suspected 'Tesco terror' attack
Defiant healthcare workers clash with anti-lockdown protesters in Colorado
Ian 'H' Watkins and Matt Evers make history with first EVER same-sex routine on Dancing On Ice
R Kelly's back-up singer 'saw him having sex with 15-year-old Aaliyah on tour bus'