NRL superstar Cameron Smith may backtrack on his retirement plans, hinting he may be done after next week’s Grand Final.

The Melbourne Storm captain had announced he would go for the illusive milestone of playing 400 first grade games by playing until the end of 2019.

But after his team’s rout of the Cronulla Sharks on Friday night Smith suggested that this season may actually be his last when asked about his plans for next year. 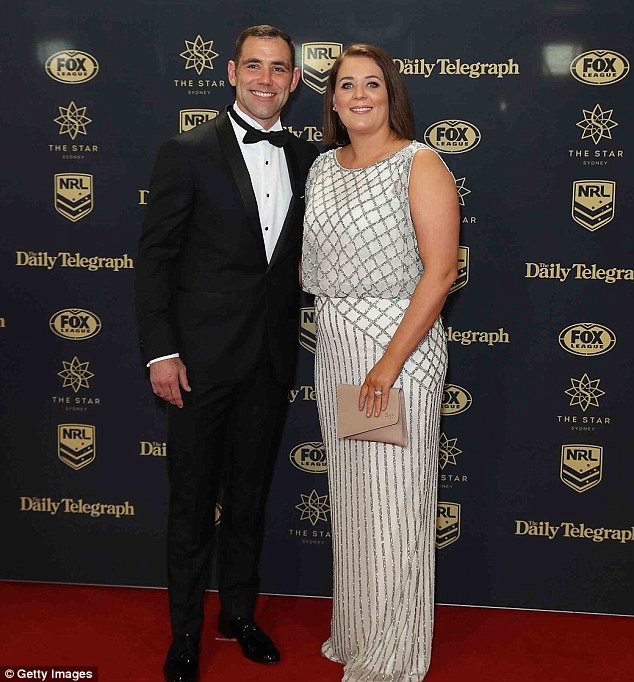 In a more surprising statement, Smith said his place in the team for next year was already up in the air 9 News reported.

‘Maybe, dunno, I don’t have a contract next year yet, we will just get through the week first and see what happens,’ he said.

However Smith went on to say he had the ‘intention’ of playing on next year but was just being honest on where things stood as of this weekend.

‘I’ve got all intention of going around next year, you guys posed the question to me. If we were to win would you consider it?,’ he said.

The comments were made during the post game press conference where coach Craig Bellamy was present and gave his opinion on potentially losing both Smith and star fullback Billy Slater. ‘Losing one of them is bad enough we don’t want to lose both of them,’ he said.

Smith’s comments came after the Storm steamrolled the Sharks  22 points to six at AAMI Park in Melbourne.

If Smith does play on next year he would become the first player in NRL history to play 400 games.

Smith is already the most capped player in NRL history with 383 games, and next week’s Grand Final will be his 384th match in the league.

The Melbourne Storm’s opponents for the Gran Final next week, to be held in Sydney, will be decided on Saturday night when the Rabbitohs face the Roosters.

Either way Smith will go up against a former Storm, Australia or Queensland teammate – Cooper Cronk of the Roosters or Greg Inglis with the Rabbitohs. After 28 years, Jason Donovan is back on stage in Joseph... and he's still braving a loincloth
Sofia Richie shows off her gorgeous gams in clingy leggings as she heads out with Scott Disick
Alex Salmond appears at High Court Glasgow for preliminary attempted rape hearing
Boy with dairy allergy died after his father gave him chocolate thinking it was 'free-from'
Cressida Bonas attends Ellie Goulding's nuptials alongside her new fiancé in white outfit
Is pet-hating killer deliberately planting contaminated chicken pieces in Wimbledon?
Pensioner is knocked off her feet by the famous Severn Bore wave as she tries to get the best shot
Google says new AI model allows for near 'instantaneous' weather forecasts