A group of campaigners turned up at the Home Office with their own ideas about how to tackle knife crime after the Government’s ‘chicken box’ strategy was branded racist.

Word on the Curb went to Stratford, east London, to ask people what they think is the solution to Britain’s knife crime epidemic and got them to write their responses on chicken boxes.

They took them to the Home Office to protest outside, but ended up being invited in by officials.

It comes after they announced real-life stories of people who have turned their backs on knife crime will appear on 321,000 takeaway boxes across England and Wales.

The Government’s £57,000 #knifefree chicken box scheme was rubbished as ‘racist’ and ‘stupid’ by MPs and community leaders. 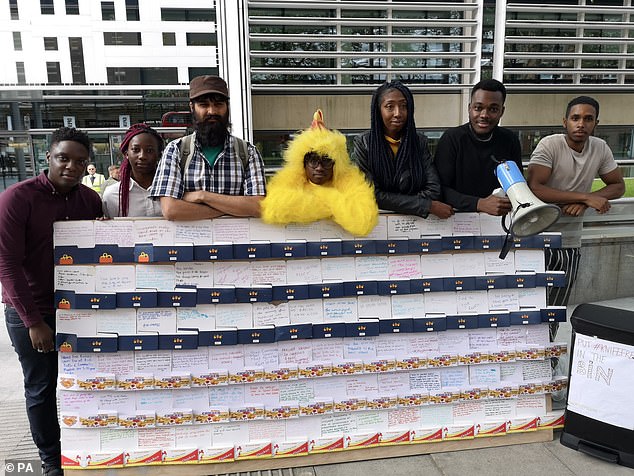 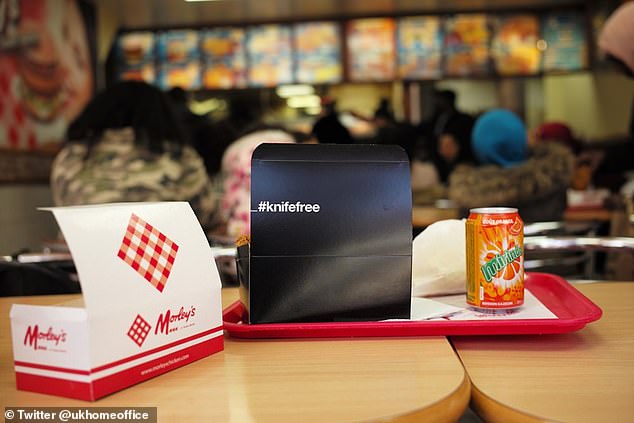 More than 321,000 chicken boxes have been distributed to more than 210 outlets in England and Wales as part of the Home Office’s #knifefree campaign

Hayel Wartemberg and Ndubuisi Uchea took to the streets with chicken boxes and encouraged Londoners to write their own responses on them by hand, with the aim of delivering the messages to the Home Office.

Solutions offered by members of the public included interest-free business loans for young people at risk, specialised officers in schools and investing in education and youth services.

Nana Opdeu-agyeman, who turned up dressed like a chicken, said: ‘Their campaign was very demeaning.

‘I think they need to go back to the drawing board and think of different solutions.

‘We just went to Stratford, I don’t see why they couldn’t do the same.’ 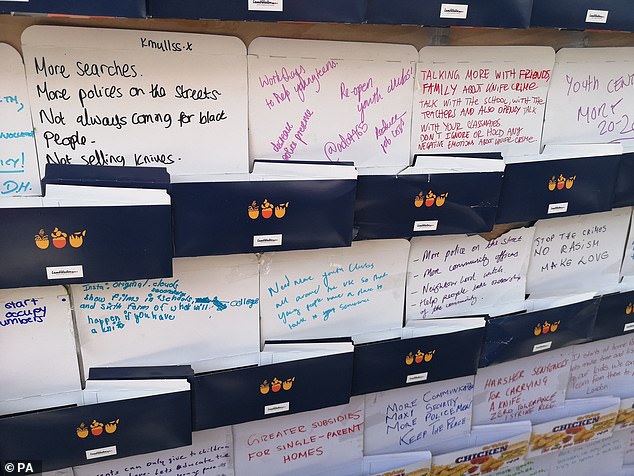 Word on the Curb went to Stratford, east London, to ask people what they think is the solution to Britain’s knife crime epidemic and got them to write their responses on chicken boxes 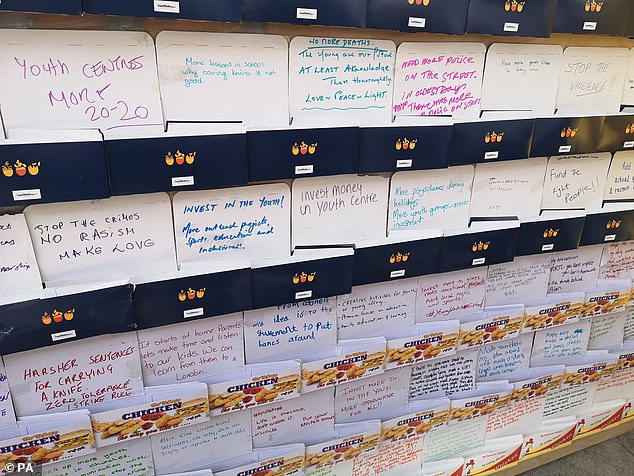 They took them to the Home Office to protest outside, but ended up being invited in by officials

The boxes, which were pinned on a large board, were not allowed past security and in to the building.

But after gathering outside, the group were invited in to meet with two staff members, who gave them an email address and encouraged them to send across their suggestions for tackling violent crime.

Mr Uchea said: ‘We are hoping that this would lead to some sort of action. Our idea was to utilise Londoners and subvert this campaign and turn it into something far better.

Mr Wartemberg said: ‘We feel happy. We have been able to speak to someone and people have seen our campaign and had an opinion on it which is enough.

‘We are only as happy as the outcome. If nothing happens on it you are negating the power on what we are doing.’ 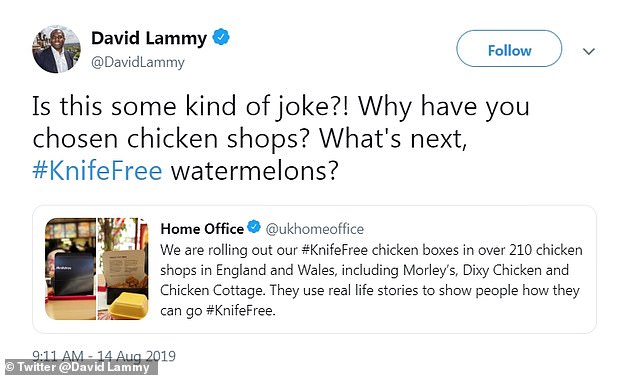 Labour MP David Lammy tweeted about the campaign: ‘Is this some kind of joke?! Why have you chosen chicken shops? What’s next, #KnifeFree watermelons?’

He added that the boxes were ‘absolutely’ a waste of money, which could have been put back into youth services.

On the campaign’s announcement, Policing Minister Kit Malthouse said: ‘These chicken boxes will bring home to thousands of young people the tragic consequences of carrying a knife and challenge the idea that it makes you safer.

‘The Government is doing everything it can to tackle the senseless violence that is traumatising communities and claiming too many young lives, including bolstering the police’s ranks with 20,000 new police officers on our streets.’ 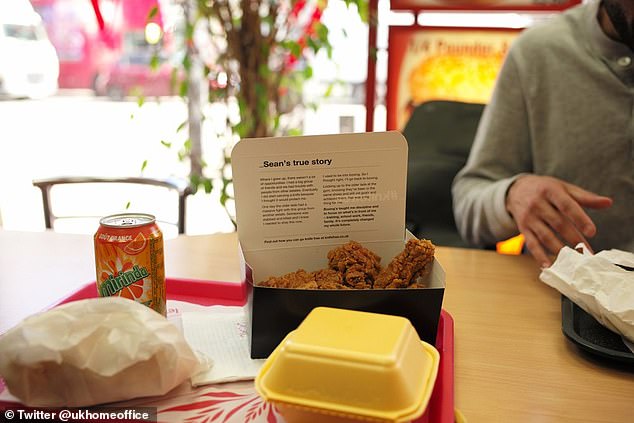 The boxes’ insides feature real life stories of young people who have chosen to pursue positive activities, such as boxing or music, instead of carrying a knife

But Shadow home secretary Diane Abbot tweeted: ‘Instead of investing in a public health approach to violent crime, the Home Office have opted for yet another crude, offensive and probably expensive campaign.

‘They would do better to invest in our communities not demonise them.’

Labour MP David Lammy tweeted: ‘Is this some kind of joke?! Why have you chosen chicken shops? What’s next, #KnifeFree watermelons?’

TV and comedy writer James Felton said: ‘Honest to God, if the best idea you have to tackle knife crime is to write stuff on fried chicken you should quit power forever in embarrassment, not tweet it out proudly like you’ve just solved world hunger.’

Another Twitter user added: ‘Spending some money funding community outreach projects, social workers, job opportunities and schools too much effort for you then?’