An experimental drug that boosts the brain’s own cannabis-like chemical may help reduce withdrawal symptoms and cannabis use in men who are dependent or have cannabis use disorder, a trial has shown.

The findings, published in the Lancet Psychiatry journal, show for the first time that men with cannabis dependence or cannabis use disorder treated with the fatty acid amide hydrolase (FAAH) inhibitor PF-04457845 used less cannabis and experienced fewer withdrawal symptoms than those given a placebo.

The treatment works by blocking FAAH, an enzyme that breaks down a principal natural endocannabinoid chemical in the brain called anandamide, which acts on brain cannabinoid receptors like cannabis does. 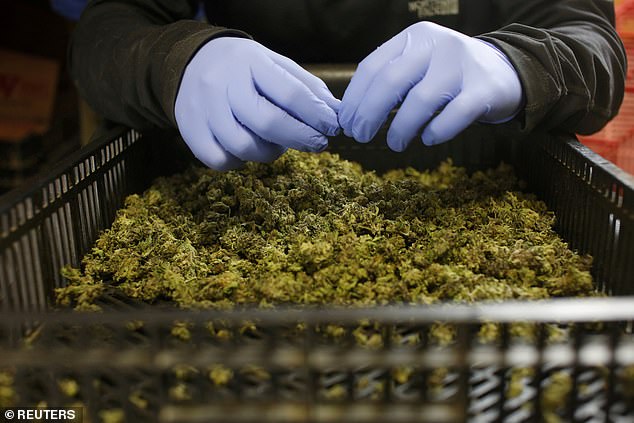 The trial by Yale included 70 male cannabis users aged 18 to 55, who either got the treatment or a placebo before cutting out cannabis. Those who got the drug had fewer withdrawal symptoms

The phase 2 randomized trial was carried out by Yale University and saw 70 men aged between 18 and 55 years either receive the PF-04457845 or a matching placebo for four weeks.

All participants were admitted to hospital for the first week to achieve cannabis withdrawal, and then discharged to continue the remaining three weeks of treatment as outpatients.

Adherence to medication was confirmed by video-calling and pill counts, and corroborated by weekly blood concentration of the PF-04457845 and anandamide.

Cannabis use was assessed by self-reporting and urine screening for levels of the THC metabolite THC-COOH.

At the start of the study, participants were smoking on average more than three cannabis joints a day.

During their first week as hospital inpatients, cannabis use in both groups reduced to zero.

Those treated with PF-04457845 reported fewer symptoms of cannabis withdrawal including depression, irritability and anxiety compared with those given the placebo.

At the end of the four weeks, the PF-04457845 group reported less cannabis use compared to the placebo group (average 0.40 vs 1.27 joints per day), and also had lower levels of THC-COOH in their urine.

Additionally, improvements in overall sleep were noted compared with the placebo.

In contrast, reductions in the time spent in deep sleep occurred immediately following abstinence in the placebo group, consistent with the evidence of sleep disturbances in cannabis withdrawal syndrome.

Professor Deepak Cyril D’Souza, from Yale University School of Medicine, who led the research, said: ‘A lot of other drugs have been tested for their ability to reduce cannabis use and withdrawal, but until now none have been consistently shown to work against both withdrawal symptoms and relapse.

‘Furthermore, unlike cannabis or its principal active constituent delta-9 tetrahydrocannabinol (THC), FAAH inhibitors do not appear to have psychoactive or rewarding effects, and are therefore not likely to be abused.

‘PF-04457845 was well tolerated. However, more research is needed to demonstrate that PF-04457845 is safe and effective in a larger sample of treatment-seeking individuals, particularly women, and in other outpatient settings over the long-term.’

Cannabis remains the most widely used illegal recreational drug in the UK, but in the US it is legally medically in most states, and is legal for recreational use in 10 states – as of today.

On Thursday, Michigan became the 10th state to legalize.

Research shows that 10 percent of regular users become dependent on it, with the risk of addiction higher if started in an individual’s teens or if used every day.

Regular users who quit may get withdrawal symptoms such as cravings, difficulty sleeping, mood swings, irritability and restlessness.

Relaxing salt regulations in ready meals 'caused 9,900 cases of heart disease'
Boris Johnson faces unlockdown muddle as the Tories call for more freedoms
Fed slashes interest rates to near zero due to coronavirus concerns that pose 'risks' to US economy
Mother-of-one, 26, opens Aldi's notorious Monster Claws packet to find ONE crisp inside
Girl scout posted birthday message to father hours before she was knifed to death in east London
PICTURED: Elon Musk's badly-damaged Mars 'Starship' prototype
Coronavirus can damage the heart in up to 20% of severely ill patients
Lifeboats launched after passenger ferry 'collides with another boat' off the Isle of Wight