This is the heart-stopping moment a road worker is sent flying through the air after being taken out by a car.

Xolele Phindela, 32, suffered serious injuries after the dramatic crash in which he was flipped by the car’s bonnet.

Police are yet to identify the driver of the Toyota Avanza in Cape Town, South Africa. 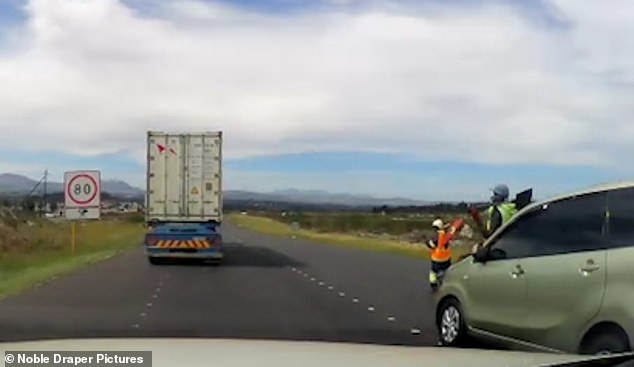 In the dashcam footage, a car follows a lorry down a road with two workers in bright hi-viz jackets in the middle.

A car tries to overtake from behind and smashes straight into one of the workers, sending him cartwheeling through the air.

Witnesses believe the driver was exceeding the speed limit of 80km per hour as he was overtaking.

Mr Phindela, who was hospitalised following the dramatic crash, fortunately avoided the oncoming traffic on the busy road.

Footage of the incident was caught on dashcam by Lyndon DeMeillon in the car behind. 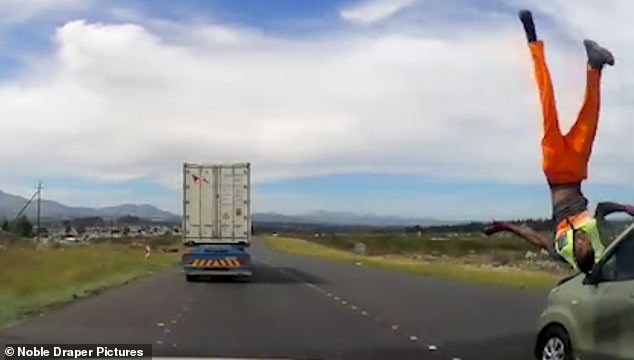 The car, which is believed to have been travelling over the speed limit of 80km per hour, flipped the man over the bonnet 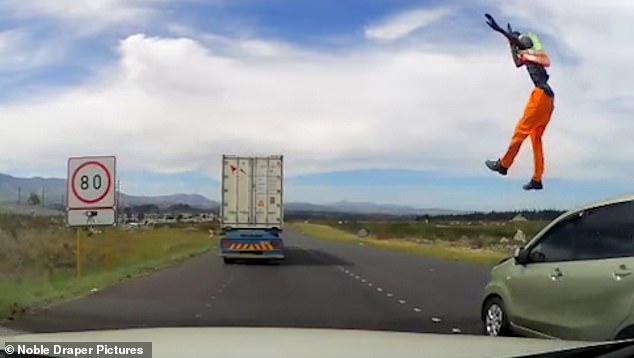 They were on their way to the coast with their two children aged seven and ten when the dramatic incident occurred, according to The Sun.

Mr DeMeillon’s wife Elri said: ‘At first when it happened I thought he had a lost an arm or a leg from the impact.

‘But when we when we watched the footage you could see it was his spade.

‘I shudder to think what would have happened to our family if that had come through our windscreen.’

The family said they cried after the shocking incident and reported it to the police.

But they have been left frustrated with the lack of police action since.